Debunked: "Leave earth before the ruling class destroys it" attributed to Stephen Hawking

Listening to Dane Wigington on his News video Jan23
at around 37mins Dane tells us Stephen Hawking warns humanity; "Leave Earth before the ruling class destroys it"

Obviously I doubted this was accurate and indeed find Stephen Hawking never said "ruling class". Instead, it appears Dane was quoting an opinion Headline from an AnitMedia article written by a Clair Bernish
who has formed this opinion from a number of the professors quotes included in the article. 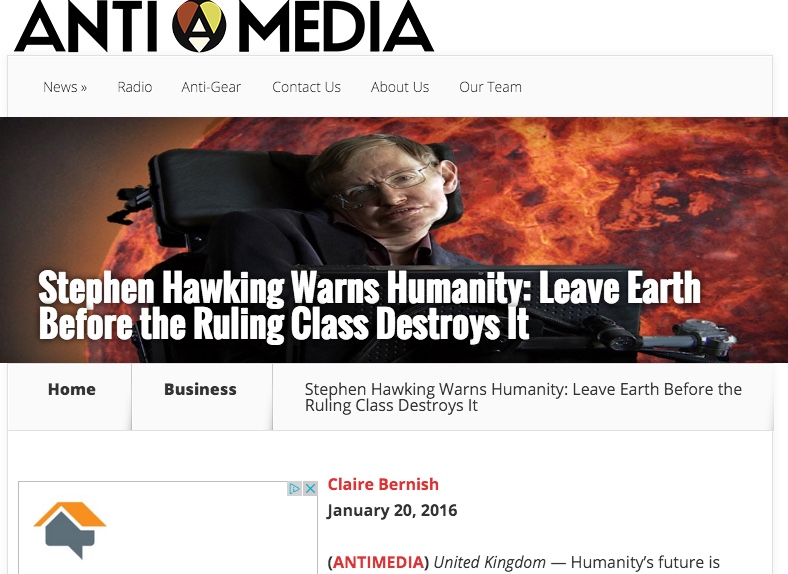 ​
Personally, I get the impression the professors remarks were more aimed at the scientific community, if anyone.

I think Dane et al would be better off focusing on the latter quotes from Stephen Hawking (bold is mine).

“We are not going to stop making progress, or reverse it, so we have to recognize the dangers and control them,” he stated. “I’m an optimist, and I believe we can.

“It’s important to ensure that these changes are heading in the right directions. In a democratic society, this means that everyone needs to have a basic understanding of science to make informed decisions about the future.

“So communicate plainly what you are trying to do in science, and who knows, you might even end up understanding it yourself.”

Stephen Hawking joins the audience as Buzz Aldrin speaks in Cambridge.
I hope this OT post about recent sighting of Prof Hawking will fix a bug in the 'New Posts' info regarding this thread.
You must log in or register to reply here.