Staff member
ETC Group just publish this map of what they claim is geoengineering around the world for the past 50 years. 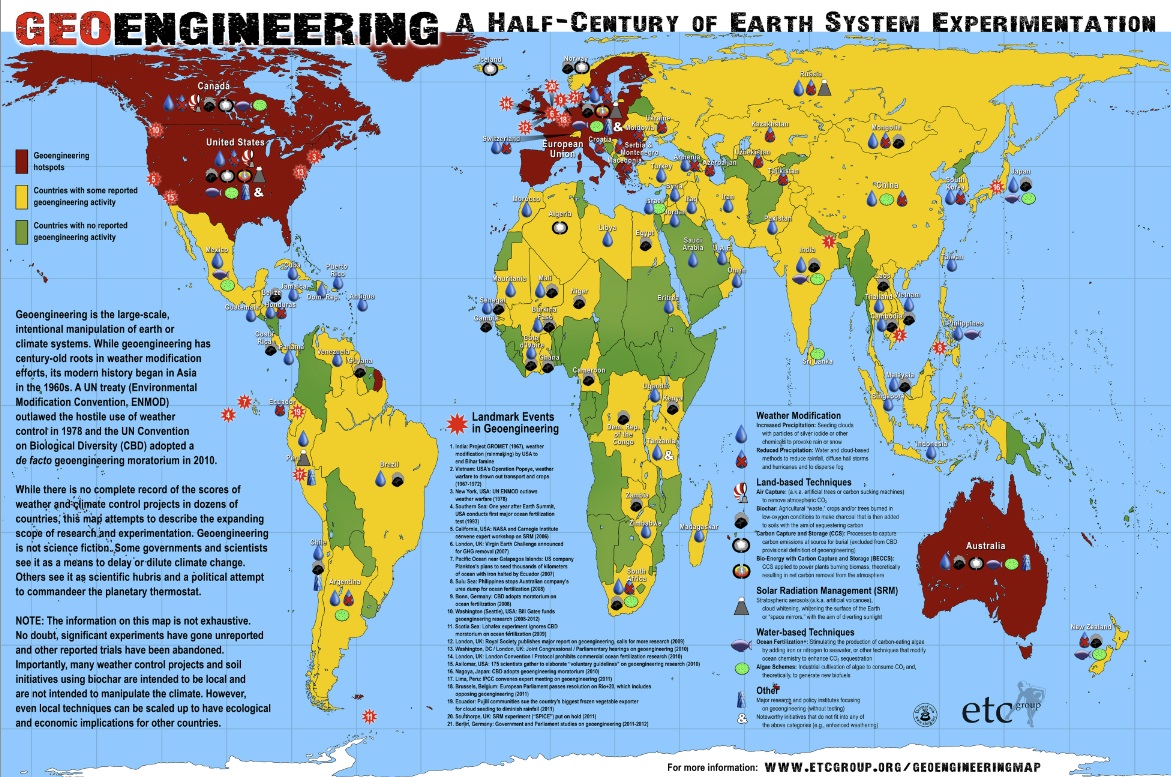 Looks like a lot. However the map is very misleading. The majority of the points on the map are things that even the ETC group admits are not really geoengineering. Most of the remainder are things that are still in the very early theoretical, or research stages.

These are LOCAL manipulations. They just increase or decrease the precipitation (rain or snow) for a very short period of time, and in a limited area. They are not geoengineering, which is a manipulation of the climate, and not the weather. Even ETC agrees with this, on the same map!

Note they also say the same about Biochar.

Biochar could be considered geoengineering, as it locks in the carbon underground, so decreases the net amount of carbon in the atmosphere. However notice all those Biochar projects in Africa? 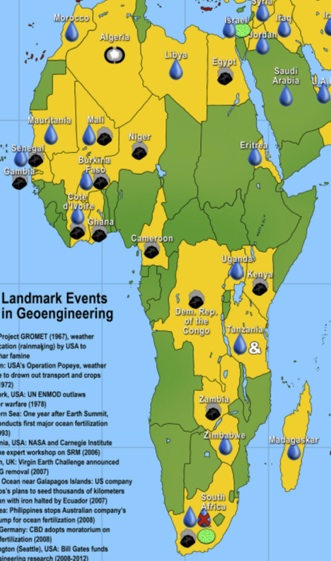 Who knew African countries were so interested in Geoengineering? Well, they are not. The vast majority of biochar projects (which are all very small scale) are done because of the benefits to crop yields, and not for their carbon benefits.

The problem with this category is that these things do not exist, except as proposals, and some research projects. There is no commercial deployment of artificial trees or carbon suckers. And it's really just a less direct form of CCS.

Again, none of these ideas has been deployed, or even got to the stage of field experiments. The closest thing to an artificial volcano that is out there is the SPICE project, which got to the stage of proposing a scale test of a balloon and hose system, which has not yet happened.
The only thing that might fall into this category is the white roof initiative. But that's more of an energy saving proposal than geoengineering.

These are things that are very much in the theoretical and small-stage experiment stage.

The ETC group raises some very valid concerns about geoengineering. These concerns are largely shared by the scientists working in the field. There is a huge amount of uncertainty as to what will happen to the planet under any of the geoengineering proposals, if they are put into practice. That is why there is practically zero going on in the world that could be considered active geoengineering. It's all very much theoretical, and small scale experiments.

Unfortunately this map gives the opposite impression. It makes it seem like geoengineering is a widespread activity that has being going on for 50 years. That impression is highly misleading, and will only serve to provide fodder to those who are motivated by fear and conspiracy theories. Now they have a map where they can say "Geoengineering finally admitted!" when the reality is nothing like the picture.
Last edited: Nov 20, 2013

I decided to write them, perhaps some of the organization is not aware of what this map really is saying. I suggest that everyone should write.

Dear Sirs/Madam,
Today I became aware of a map which ETC group has put out supposedly depicting what you call "large-scale manipulation of earth or climate systems".

However, the majority of what you show on the map doesn't qualify at all as geoengineering, as succinctly pointed out by Mick West here:

I suggest you peruse Mick's polite and accurate criticism of what you have put out and ask yourselves if you indeed feel that your map is an accurate way to depict the subject.

In my opinion, it is not accurate at all

Just letting you know that someone posted this to rbutr. You guys might be interested in rbutr.

Staff member
That was me, thanks Craig! rbutr looks quite interesting. I saw it on Tim Farley's site.
J


100 tonnes of iron sulphate dumped into the Pacific

search 'weather modification'. it's been going on for decades with many companies in the US all over the world. weather mod is geoengeneering

Unregistered said:
search 'weather modification'. it's been going on for decades with many companies in the US all over the world. weather mod is geoengeneering
Click to expand...

Weather modification (cloud seeding) is generally NOT considered geoengineering, however it is on the map. See the first post where I discuss this.

Cloud seeding has never been secret.

Rather than mail bomb them I've enquired through their website what their sources are for ascribing Ocean Fertilisation, Algae Schemes, Reduced Precipitation and Biochar to New Zealand - I've not heard of an of these being done here - except some complaints that chemtrails causing drought ...but then that same site complains that chemtrails cause rain.......... it's kinda hard to follow sometimes

100 tonnes of iron sulphate dumped into the Pacific

This was done by a private company that seems to do it without asking any gouverment.

And much more important:

Simular Experiments where done twice by german Researche-Ship "Polarstern". The idea is to feed PLankton while they are blooming, so the plankton makes more poll then usal and the unused poll with bound Co2 on it will sink to the ground.

These experiments called "Lohaflex" and "Eisenex" both failed, because the polls where eaten by other creatures like crabs and they growed in population too.

This seems to be a useless way to control the climate. If a private company do this to "save our world" it´s a risky play by them and officials should check out legal methodes against it.

And this seems to be a second try for Project Spice - a tethered balloon flying in the higth of 20 Kilometers with a pipeline to the ground, pumping water or aerosols into that high. A testfield-Project for Spice with a balloon in 1 KM altitude was often delayed and finally canceled in Great Britain. See http://en.wikipedia.org/wiki/Stratospheric_Particle_Injection_for_Climate_Engineering#Project_status 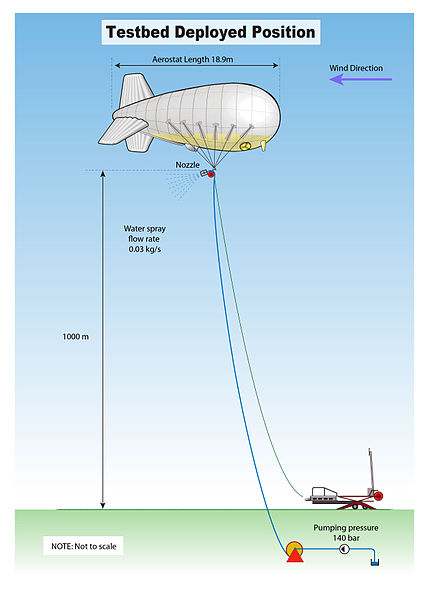 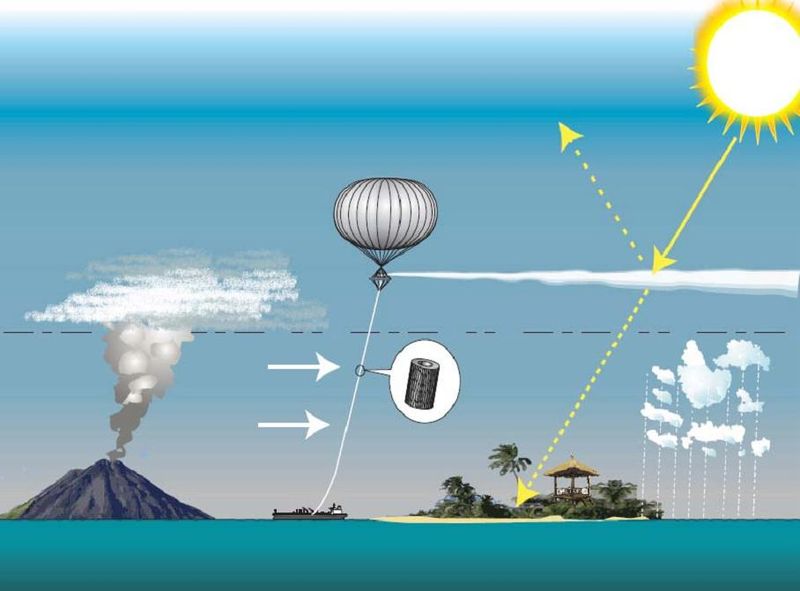 ... that would be really impossible to hide and can´t be done secretly!

This is a View from 22 Kilometers Altitude from a test-Jump by Felix Baumgartner: 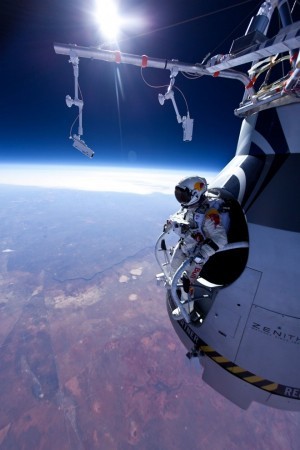 Interesting, that Chemtrail-believers allways posting what they found about Geo-Engineering. No matter if it was too high for planes (Stratosphere) or too deep - And even some Experiments with Plankton under Water are used as evidence for chemtrails...
Last edited by a moderator: Nov 20, 2013

Mick said:
Unfortunately this map...makes it seem like geoengineering is a widespread activity that has being going on for 50 years. That impression is highly misleading, and will only serve to provide fodder to those who are motivated by fear and conspiracy theories. Now they have a map where they can say "Geoengineering finally admitted!" when the reality is nothing like the picture.
Click to expand...

Its unfortunate that when one points out that a laboratory experiment that tries to turn algae into fuel is hardly globally implemented "geoengineering" one is met with cries of "shill" and censorship.
You must log in or register to reply here.

The Bunkum Mystification of Quantum Mechanics by Non-Physicists
2 3

E
Geolocation with the Overpass API