Dane Wigington wrote about the ozone hole again, this time citing a recent report about the record size of the Antarctic ozone hole:
[bunk]We are being lied to on every level and to an unimaginable degree. The supposedly recovering Southern hemisphere ozone layer has hit a new record size, but "don't worry", the power structure controlled World Meteorological Organization says there is no reason for alarm. Really? Why shouldn't we be alarmed?[/bunk]
http://www.geoengineeringwatch.org/geoengineering-and-the-ozone-layer-recovery-lie/

He asks why we shouldn't be alarmed, although it is explained in the article he links.
This is not an all-time record for the ozone hole, it is only a record for the day October 2. The ozone hole was larger several times in past years, e.g. in 2000, 2003, and 2006. Also, if we look at the long-term trends, we see that the ozone hole size is stabilizing, and slightly recovering, even though there is large fluctuation between years: 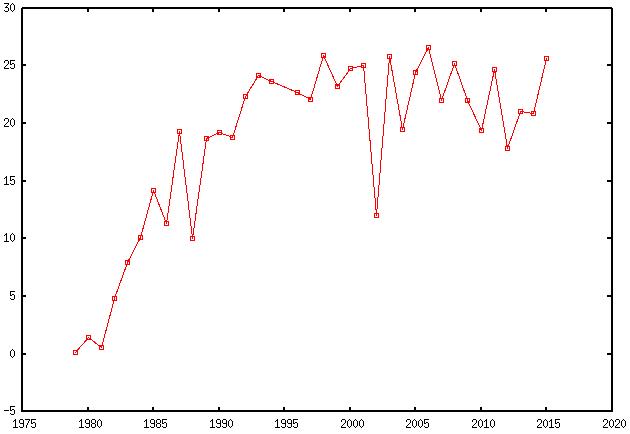 Then Wigington also claims this:
[bunk]And there is of course the "unprecedented" northern hemisphere ozone hole that the power structure controlled mainstream media won't even mention.[/bunk]
In fact, the Arctic ozone hole he refers to appeared in March 2011, and only lasted a few weeks, it disappeared by April, as discussed in this article. But apparently Dane didn't get the memo on that, he still believes there is an ozone hole over the Arctic.

Both this year's relatively large Antarctic ozone hole and the Arctic ozone hole in March 2011 were partly caused by meteorological conditions, coupled of course with air pollution.

The claim that UVB radiation has increased has been debunked elsewhere.

Staff member
A quick overview of the ozone hole history, and relationship to temperature

Then Wigington also claims this:
[bunk]And there is of course the "unprecedented" northern hemisphere ozone hole that the power structure controlled mainstream media won't even mention.[/bunk]

I am tired of hearing about the silent mainstream media controlled by the global power structure.

This search on the ozone hole took a few minutes on Google.

don't worry....perhaps because most of y'all are in the NORTHERN hemisphere??

I find it interesting when geoengineering believers will say that a so and so Government paper/file/transcript/textbook/whatever from 10-50 years ago said something incriminating. Then in the very next sentence they will say, "we cannot trust ANYTHING the Government says, they are all liers, and they will do and say anything to push their agenda" The hypocracy is astonishing.
You must log in or register to reply here.