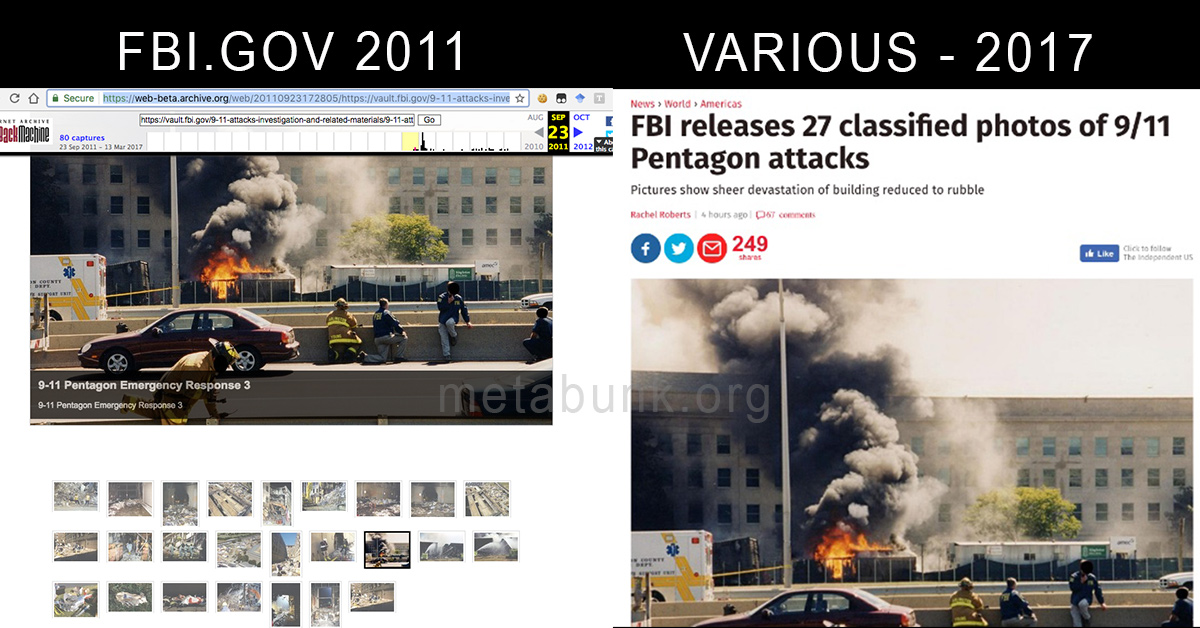 ​
However they are not new, they were released in 2011. The confusion seems to just be due to a reorganization of the FBI's web site.

The photos can be found on the following web page:
https://vault.fbi.gov/9-11-attacks-...terials/9-11-attacks-and-investigation-images

And archives date it back to 2011.
https://web-beta.archive.org/web/20...terials/9-11-attacks-and-investigation-images 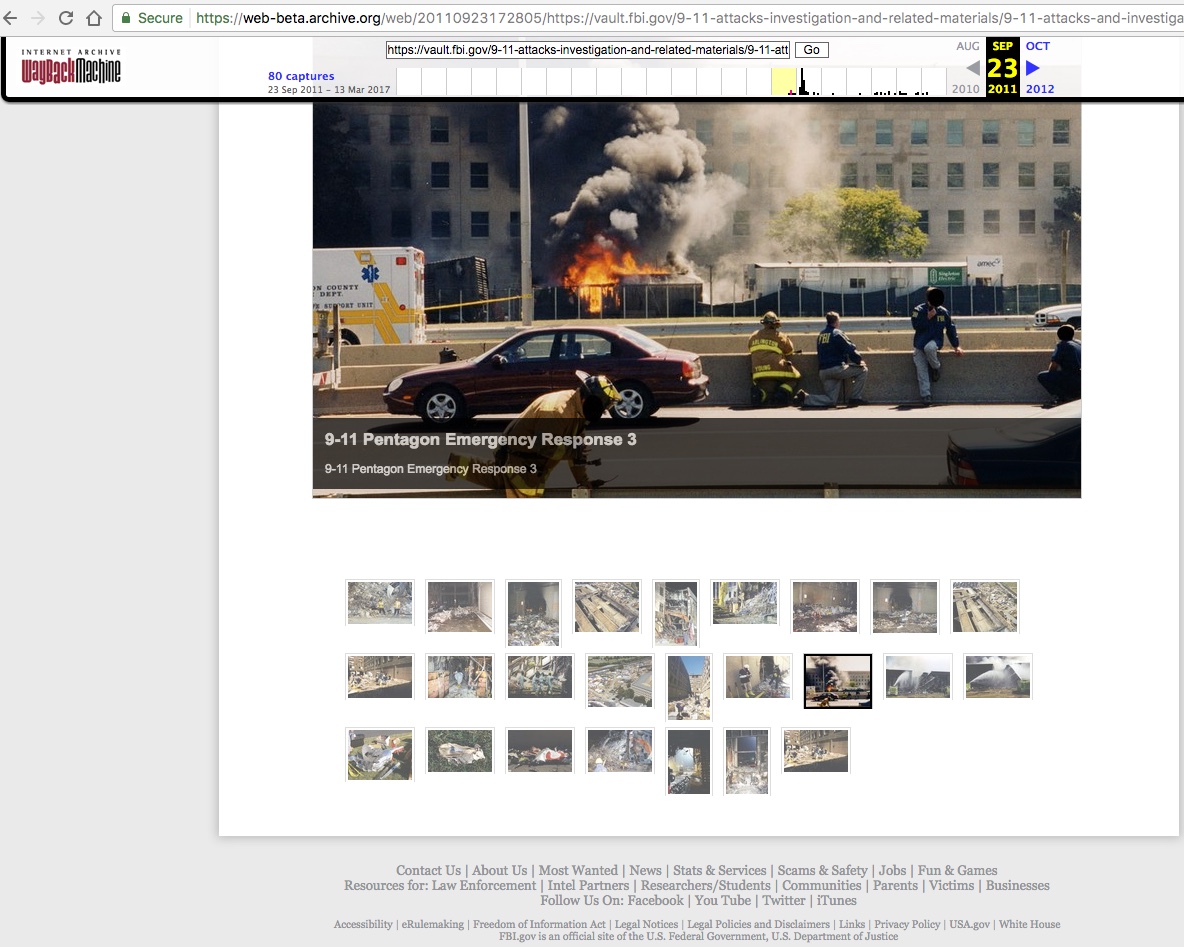 ​
The collection of photos had previously been published on cryptome.org, and an Italian blog, but don't appear to be widely known. They were brought to people's attention when they were mistakenly included in the "Recently Added" page on fbi.gov:
https://vault.fbi.gov/recently-added 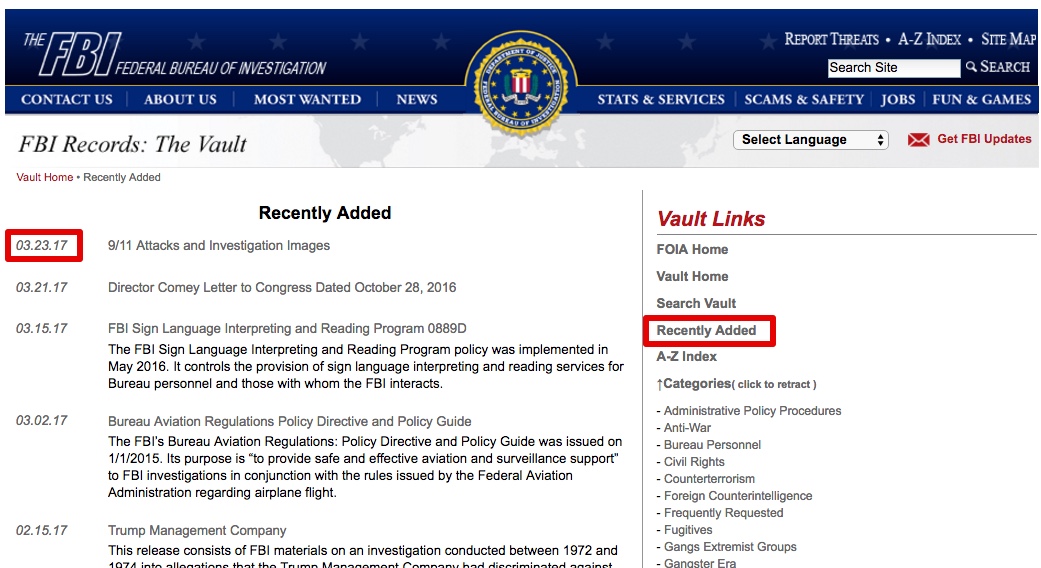 ​
That takes you to a page where the individual photos are listed with a 2017 date:
https://vault.fbi.gov/9-11-attacks-investigation-and-related-materials/9-11-images 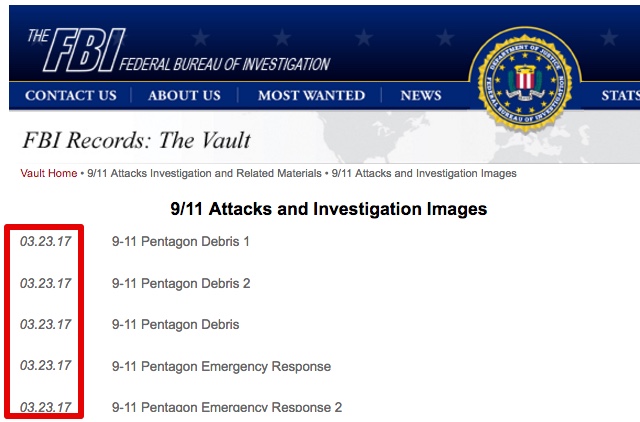 ​
However if you click the link back up the hierarchy it takes you back to a page linking you to the 2011 page:
https://vault.fbi.gov/9-11-attacks-investigation-and-related-materials 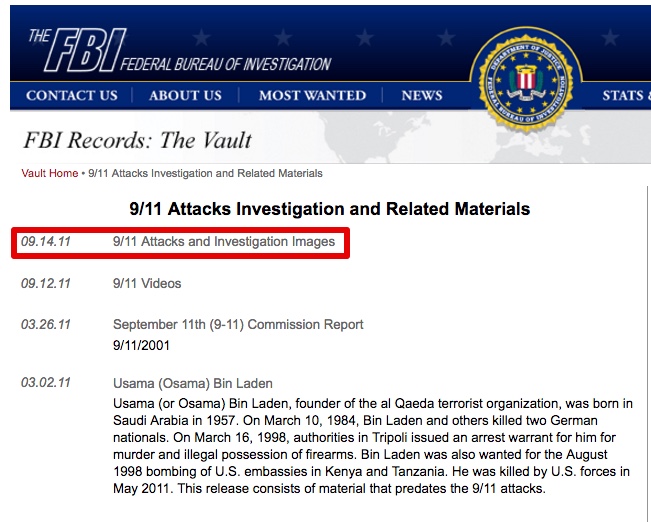 So it seems like a site reorganization simply created new dates for the images in their new setting. But the old 2011 pages are still accessible and archived, proving this is not a new release.
Last edited: Mar 31, 2017

Staff member
The archived FBI page is a slideshow of lower resolution images. Cryptome
https://cryptome.org/info/fbi-pentagon/fbi-pentagon.htm
links to:
http://vault.fbi.gov/9-11-attacks-investigation-and-related-materials/image/
Which only existed in that form for a month but had links to the images in full size, some 15MB files.

I wonder who must have messed up that badly to make such a mistake.

Serrara Fluttershy said:
I wonder who must have messed up that badly to make such a mistake.
Click to expand...

It's a pretty simple error from an IT perspective. The "recently added" page is probably automatically generated. Someone was updating old pages, so to the system they looked like they were new pages.
D

we live in world of hapless coincidences and mistakes!

davebeard said:
we live in world of hapless coincidences and mistakes!
Click to expand...

Truer words are seldom spoken. We live in chaos (in its truest meaning)

davebeard said:
we live in world of hapless coincidences and mistakes!
Click to expand...

True. Has anyone ran with this recently? "New" info usually stirs up the sheets. I see three or four of those as being fuel for "staged" photo rumors. Some of the rooms with burnt walls, exposed ceiling, and burned office equipment? The piece in the grass wit the serial number? If I were a CTer, and looking for the "answer". If I thought that these were new, I would look at these as holy grail-type "evidence". And I would start the insanity.

There are no new photos since there is nothing new to show ...id love to see one with the invisible plane in it....but since it looks like no plane hit the pentagon ...after 16 years we get this ..." mistake "

DJC said:
There are no new photos since there is nothing new to show ...id love to see one with the invisible plane in it....but since it looks like no plane hit the pentagon ...after 16 years we get this ..." mistake "
Click to expand...

In many, perhaps all of the images of that particular photo set, "it looks like" there were no offices or meeting rooms, or any other kinds of workplaces for humans, inside the Pentagon - nor any humans.

What do you make of this?

(There are plenty of other threads, I presume, that discuss the multitude of evidence that a plane DID hit the Pentagon - many eye witnesses, physical wreckage found, FDR found and readable, radar data, damage pattern, DNA found and attributed to plane passengers, images from a couple of surveillance cams showing a plane approaching the Pentagon wall, etc. - and even photos of plane parts identifyable as coming from a Boeing 757 in AA colors, in this very photo set, of course.)
You must log in or register to reply here.