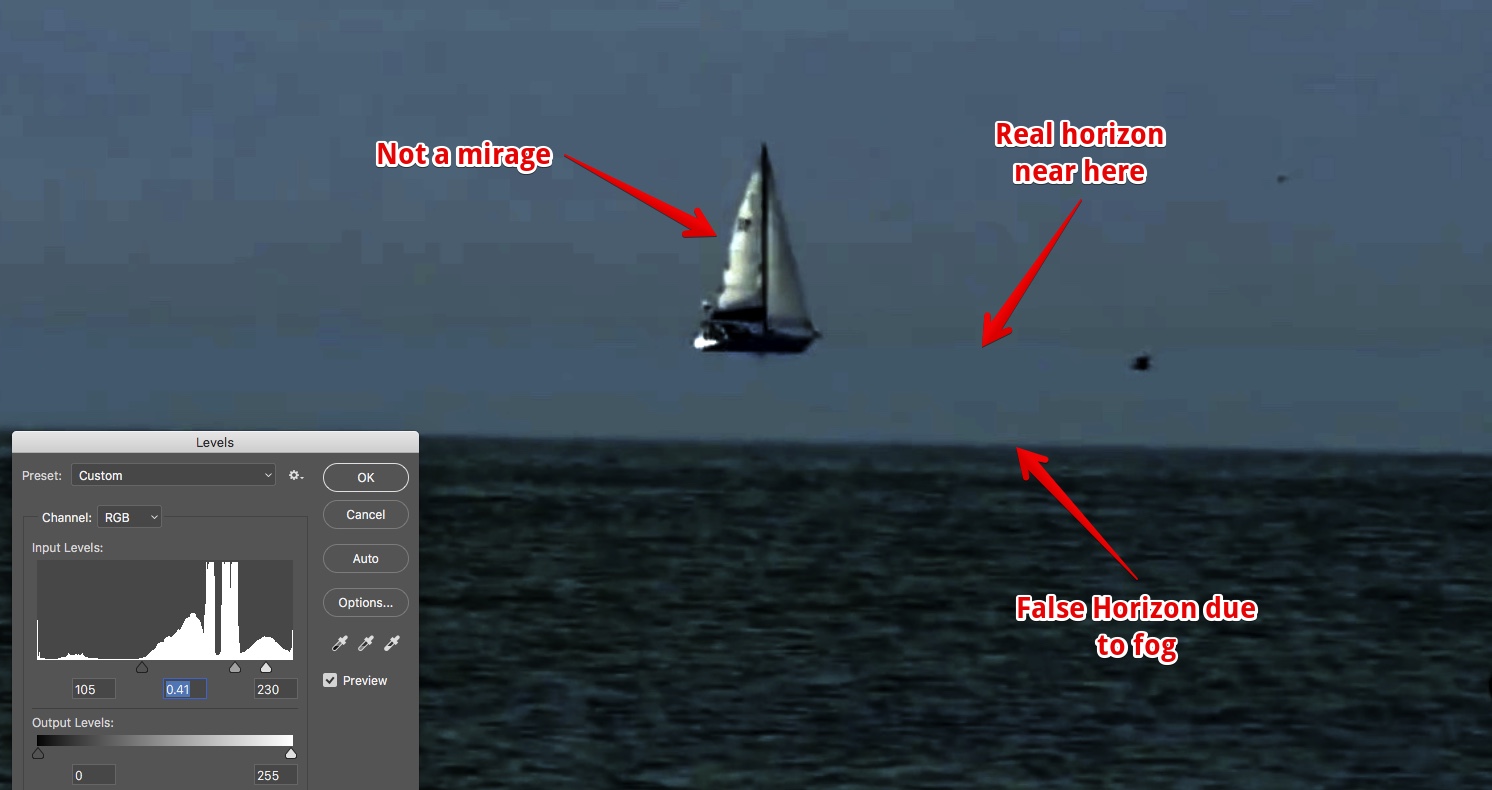 Tabloid media love to invoke the cool sounding "fata morgana" to explain images of things floating in the sky. The problem is that a real fata morgana looks like this: 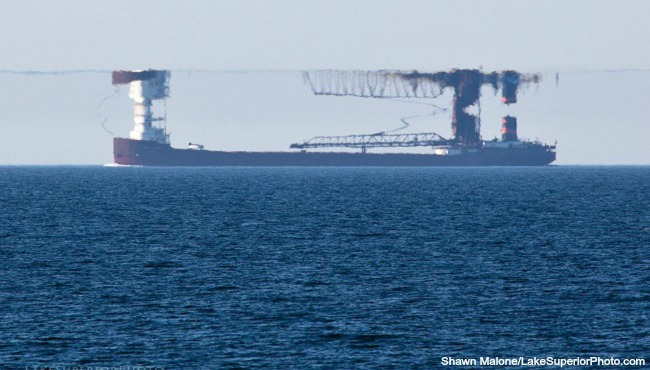 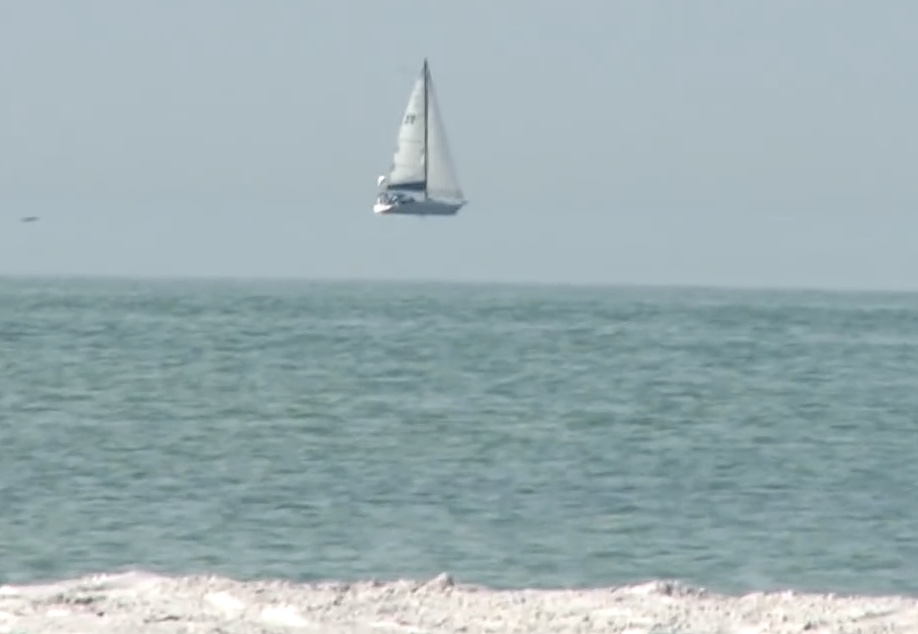 Despite the Science Channel's talking heads saying this is a Fata Morgana, it very obviously is not. The giveaway is the total lack of distortion, duplicated images, or inversion. It's just a boat, relatively close to shore, but beyond a false horizon created by the fog bank behind and around the boat, combined with the shallow angle at that distance, altering the reflection off the surface of the sea. If you boost the levels in the image, as I did with the title image of this post, then you can see where the horizon would be.

The person who shot the video says:

That is what really happened that day, the "Fata Morgana ". That was a very cold and calm morning, no breeze. The steam created from the warm waters of the Golf Coast of Florida create a thin layer of fog over the ocean, creating the illusion of the sailboat floating on the air. If you look closely you could see the water line over the boat surface. The apple was a prop that we used that day for a TV commercial.

Content from external source
There's several examples of this type of illusion being "explained" as a fata morgana. 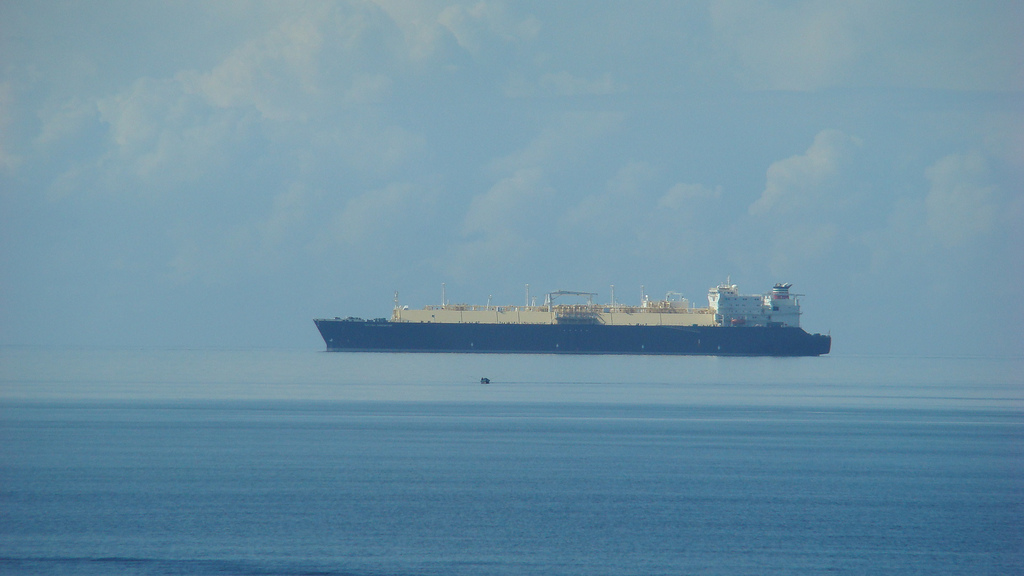 It was reportedly filmed by a tourist but witnessed by many more people on the beach.

While there have been claims it was a real flying boat, or even an odd-shaped UFO exiting the sea, the truth, as often is, remains likely to be more down to Earth.

Level-headed sceptics said it was not a flying ship but another example of an unusual optical illusion, known as “Fata Morgana.”

Content from external source
But again, a little adjustment of the levels shows it's just a change in the surface of the water that's creating a false horizon. You can even see the brighter parts of the boat (where the bridge faces the sun) creating ordinary reflections on the water surface below.

This photo is higher resolution than the video of the sailboat, and so we can see the difference between the water surface and the sky. We can even see the ripple of the wake from the small boat that's "in" the illusionary sky area. 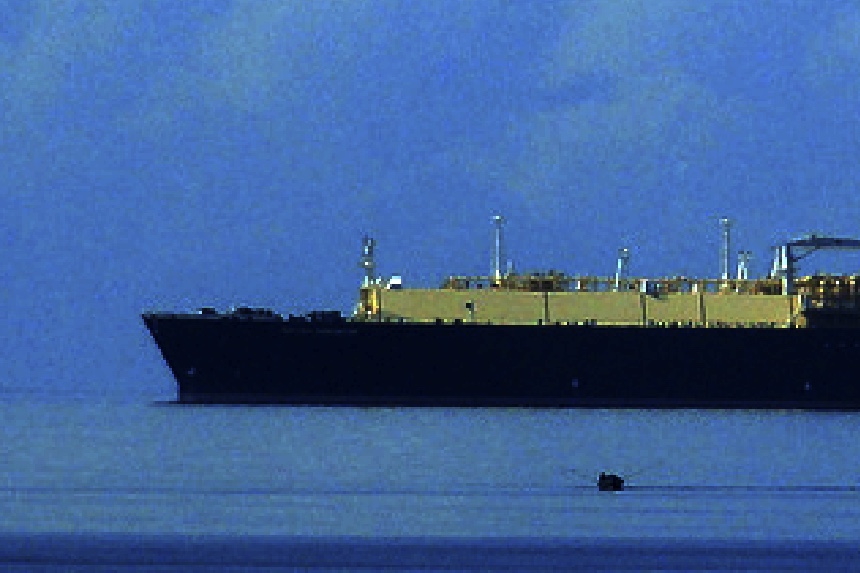 Fata Morgana sounds cool, and it does make some really cool images sometimes. But it's not a panacea explanation for everything that looks like it's floating in the sky.

I don't see evidence of fog. I think it is just a patch of water with the same colour as the sky.

Clouds Givemethewillies said:
I don't see evidence of fog. I think it is just a patch of water with the same colour as the sky.
Click to expand...

Well yes, but it's not like it's different color water. There's a lower quality video out with a wider shot (the apple is a prop for the video shoot) 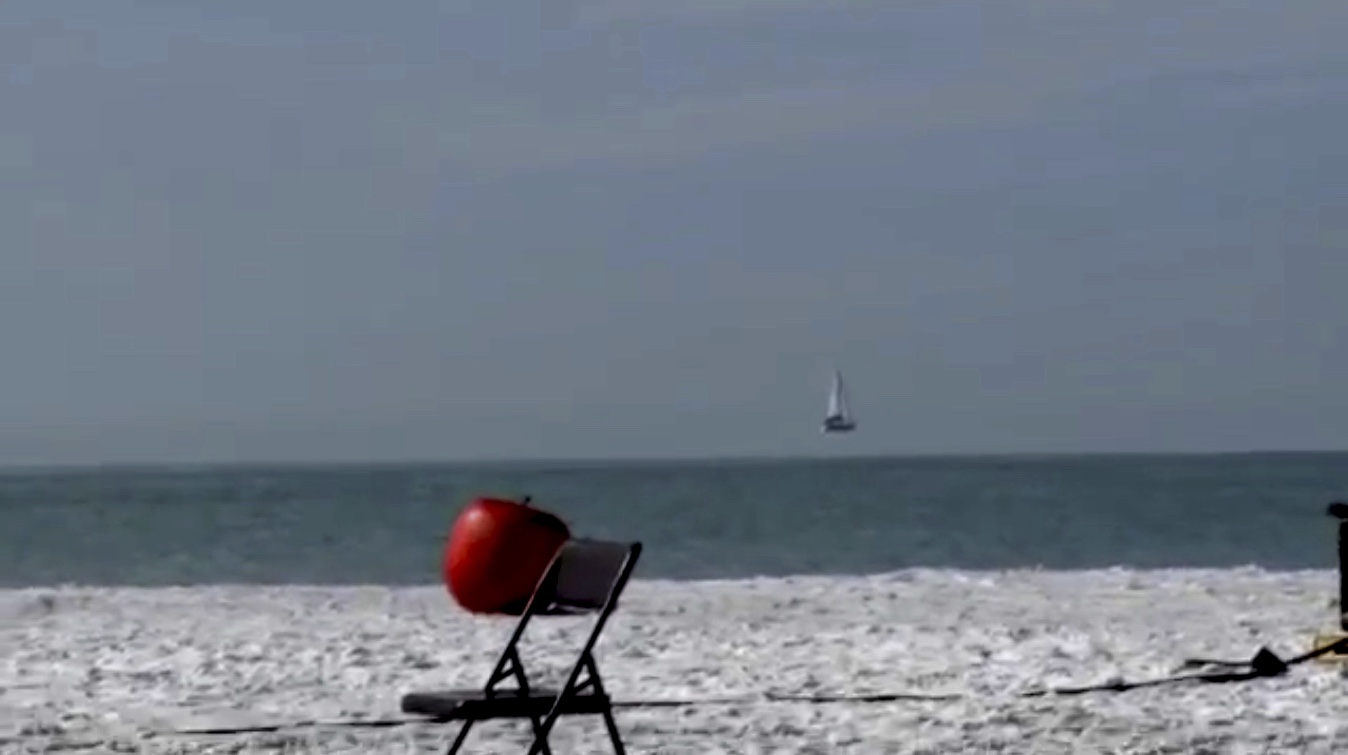 You can see a bit of blue sky there. The video also describes fog, so I think it was more apparent to him, assuming he was there.

I don't think it's a simple as a reflection of a band of fog though, I'm not entirely sure, but I think there's a combination of factors. The surface of the water is reflecting something that looks like the sky behind it, I think the fog serves more to obscure where the true horizon is, and to blend in the sky/sea area with the actual sky.

In this example there's more haze than fog, but it still serves to obscure the horizon.

I think the floating sailboat just has a bit more of that.

The difference in reflection beyond the false horizon is something like this: 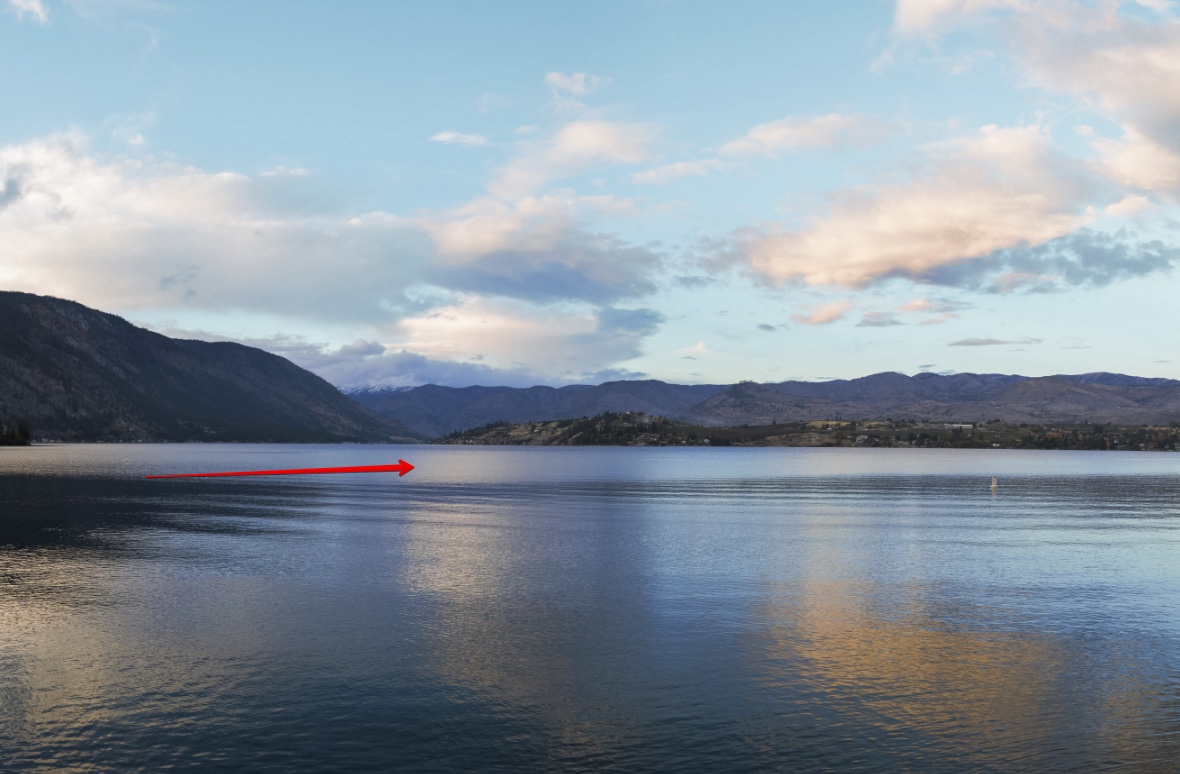 I'm not sure exactly what's going on here, but I have two theories:

The absence of a reflection of the boat seems odd for such calm conditions. Perhaps there is a thin layer of dense fog, but it must be only an inch or so, as I can see the shape of the transom.

Clouds Givemethewillies said:
The absence of a reflection of the boat seems odd for such calm conditions. Perhaps there is a thin layer of dense fog, but it must be only an inch or so, as I can see the shape of the transom.
Click to expand...

I don't think you'd see a reflection. Look at the lake image above, there's no reflection of the hills. Just scattered reflections of the overall sky color.

I also don't think it's a 1" layer of fog, there's just fog behind, and perhaps somewhat around the boat.

there is a good gentle breeze (3 Beaufort) on the dark part of the sea (when in focus) but the boat is hardly moving, although the sails seem to be setting, it is hard to tell with a fully battened main. It needs to be absolutely flat calm to get a specular reflection, so there is no need for fog to obscure a reflection, create that transition line, or at all, although it was reported.. perhaps to explain what they saw.
Last edited: Oct 1, 2017

T the risk of being controversial, I have noticed that scientists sometimes make the mistake of saying "it must be so and so, and I am a scientist don't you know" because they are too thick to think of anything else!

I actually recognized the ship in the second image of the original post - it is the Kaye E. Barker. I see this ship come into the port of Green Bay on Lake Michigan sometimes. http://www.boatnerd.com/pictures/fleet/kebarker.htm

Anyhow, this thread is helpful for me to understand misinformation about these visual phenomena.
L

Boats can be very well be seen floating in air because of it being a mirage, but usually you will see the reflection as well. Just like this one : 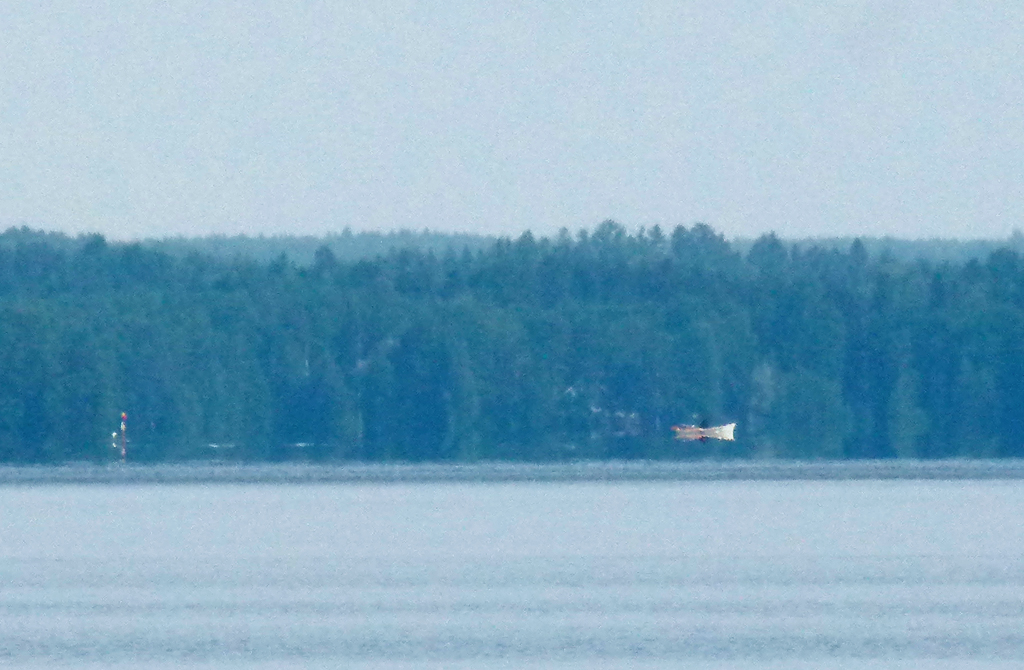 Now i know that this is just on a large lake and the opposite shore also has the same distortion which makes the mirage evident, but the key point is that you should see at least some bit of a reflection. Not a sharp bottom of a boat.
You must log in or register to reply here.

Fata Morgana as a Possible Source of UFO Sightings

M
Ufos arrive to the central zone of Chile. (Debunked).