Scientists take chocolate, which is then blessed in various ways (by the mediators themselves, a Tibeten shaman, or an intention recording and playback device). The chocolate is then eaten for a week by four groups of 15 people, and their degree of mood disturbance is recorded every day. The results are pretty much the random walk you would expect from such small sample sizes. 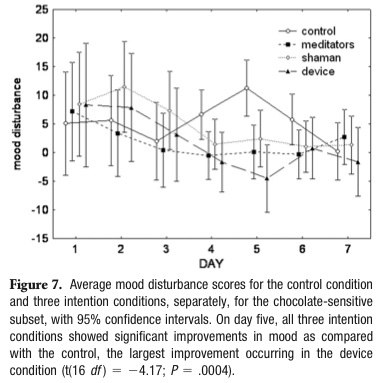 On day five, some people in the control group were evidently having a bad day. The researchers take this as a significant result.

The overall intention versus control difference on day five resulted in a modest P=.04, which which is not particularly persuasive. However, the same comparison for the preplanned subset of people who did not habitually eat much chocolate resulted in P = .0001. This is no longer easily attributable to chance, even given the small sample size of the experiment. Other conventional expla- nations do not readily come to mind.
Click to expand...

The "P-value" is basically the probability that the results might have been the result of chance, if all other variables are eliminated. The researchers ignore the facts that the groups were actually very different (inevitably, as there were only 15 people in each group), and experienced very different weeks. If you were to take 60 people in San Francisco at random, and separated them out into four groups of 15, you'd likely get very different groups. And a group of 15 (the control) is likely to vary more than a group of 45 (the average of the "intention" groups). So, yes, it is actually easily attributable to chance.

What really struck me though, was the extraordinary "get out of criticism free" clause at the end of the paper.

Future efforts to replicate this finding should seriously consider sources of intentional enhancement and contamination that might influence the postulated effect. On the enhancement side, we recommend that the intentional imprints be provided by highly experienced meditators or other practitioners who specialize in tasks requiring intense, prolonged concentration. In addition, both the participants and investigators should ap- proach this experiment critically—but genuinely open—to the hypothesis. Although it is necessary to maintain a skeptical stance in science, persons holding explicitly negative expectations should not be allowed to participate for the same reason that dirty test tubes are not allowed in biology experiments; if one is testing the role of intention, then vigilance is required about the intention of all individuals involved in the test. This would extend to people who are aware of the experiment but are not otherwise involved; it may even extend to people who learn about the experiment in the future after the study is completed. Given theoretical support and experimental evidence for retro-causal effects replication of intentional phenomena may be inherently limited because once conducted and published, an experiment might be influenced by a potentially infinite number of future intentions (this divergence problem is only a serious problem if intentions of all observers have the same impact, eg, see Houtkooper56). Analogous to taking a flash photograph of an object in a hall of mirrors, in this realm it may not be possible to completely eliminate all sources of contamination.
Click to expand...

So in order for the experiment to work:


Basically, every time the experiment does not work - then it's because someone was skeptical, somewhere in the world, and possibly hundreds of years in the future.

Chocolate does contain a mood lifting chemical called PEA (phenylethylamine). PEA is a central nervous system stimulant but the human body can only absorb very small amounts from chocolate. Again, this is not enough to affect our emotions.

Staff member
But in the study everyone was given the same amount of chocolate, just some of it was "blessed" more than others. It's rather fringe science.

I think chocolate cheers people up momentarily because it's so yummy.

I just heard about this study a short time ago.

With any strange and probably controversial study, the first thing I do after reading it is immediately search for criticisms against said study, in case there were any fundamental problems with them that I couldn't see myself.

The rest of your criticisms are plain wrong.

1) All partipants must believe it works.

No. As stated in the article, and you quoted,

"both the participants and investigators should ap- proach this experiment critically—but genuinely open—to the hypothesis."

The researchers are advocating a skeptical attitude, which is pretty fundamental in science. What they are -not- advocating is blind acceptance, or dismissal, of a hypothesis before the experiment has finished. To say skepticism = belief is, quite simply, a lie.

2) Everyone aware of the experiment must believe it works (even if they don't participate, or are even nearby)

3) You must tell nobody skeptical about the experiment in the future, or their skepticism will travel back in time, and negate the results.

This is kind of a separate argument... I'm only vaguely familiar with research done on retrocausality, and am not sold on it one way or the other. But this does not "debunk" the experiment... it is simply one of the controls of the experiment they decided to include based on other research they thought relevant. It might very well not be a relevant factor in the slightest... another experiment with two more groups, "blessed" and "unblessed" chocolate and telling people about it in the future (with a larger number of participants, of course) could establish whether "retrocausality" has any effect on the result. But this in no way "debunks" the experiment posted, it would only give evidence for, or debunk, the relevance of "retrocausality" as a factor.

Staff member
The point is that it gives them an "out" if there is any result that disagrees with their expectations. Since you can't really test the expectations of the experimenters, or people around them or readers in the future, then you can always claim a negative result was influenced by some unbelievers.

All of which would be irrelevant if they actually got a positive result. And yet they spend all their time explaining why negative results don't disprove anything.

I can see why you would make the jump from "active disbelief can ruin the experiment" to "he will claim that any failed replication of this experiment is due to experimenter bias", but that's a rather premature criticism. It is merely a relevant (and and unusual one, given the nature of this study compared to others) variable that other researchers might fail to take into account, on the off chance anyone else bothers to perform this experiment again. It seems as though a simple double-blind would eliminate that potential effect (have people who -aren't- the original researchers buy the chocolate and interact with the "blessers" for them). That way, a negative replication couldn't reasonably be due to the "intention" of the researchers interacting with the chocolate in any way at any point in time. It appears the original study also used double-blinds. It doesn't seem to be an "out"... so much as, "This is a fundamental point to pay attention to for anyone attempting to replicate the experiment."

(Unless Radin were to later claim that "the disbelief in the healing power of chocolate from any person, at any time, anywhere, who have never seen, touched, or interacted with the experimental chocolate will ruin the experiment", which would be silly, and does not appear to be the case.)

It looks like you also only posted the results of only one of groups tested... the one with a P value of 0.04, which is not significant. Analysis of the other groups in the article show P values of 0.004 and 0.001... pretty significant, so it appears there was a positive result.

Semantically, it would be a waste of time arguing "how much time spent discussing why negative results might not disprove the experiment", but it certainly isn't "all their time". A significant amount of time is spent dealing with alternative explanations as to why the result can't be attributed to explanations beyond the "blessing" variable.

I highly doubt anyone will try replicating the experiment... but the results would seem to suggest "We should do this again with a larger group of people", not "This didn't work and is a waste of time".

Scientists take chocolate, which is then blessed in various ways (by the mediators themselves, a Tibeten shaman, or an intention recording and playback device). The chocolate is then eaten for a week by four groups of 15 people, and their degree of mood disturbance is recorded every day. The results are pretty much the random walk you would expect from such small sample sizes.
Click to expand...

But chocolate is supposed to emulate the feelings of highs associated with sex. So surely the results are invalid unless one abstains from sexual activity for a week?
You must log in or register to reply here.

The Origins of AAWSAP