Dutchsinse has been putting his usual fearmongering spin on the sinkhole near Bayou Corne, LA from about day one, and since his latest installment has been making the rounds on conspiracy sites perhaps a bit of debunking is in order.


In a recent public briefing, containment berms and water flow were part of the discussion. One of the aspects of the sinkhole is that surface water is slowly flowing into the middle of the sinkhole, not welling up to the surface from within. It has been like that from the beginning. A question is raised about berms keeping sinkhole water from reaching the little town. At 2:00 into the video the speaker describes that they have only seen water flow from the berms into the center of the sinkhole, when they equalize water they only let water in. Someone else asks "Then where's it goin'?" to which the speaker replies, "It's goin' down probably into the MRA aquifer." He explains that there used to be one hundred feet of clay over the aquifer but that cap has fallen into the sinkhole creating allowing surface water into the aquifer at that spot.

Here is the description for dutch's video:

Per the geologist, the floor of the sinkhole has collapsed ... quote , "Most likely into the aquifer".

The geologist tells the people in attendance that water continually flows IN to the sinkhole. Leading someone to ask "where" is the water flowing to..... if it is steadily coming in to a supposedly closed space.

Leading the geologist to disclose the space is NOT closed. Now "most likely" (per the professional on the case) has collapsed into the main aquifer for the region.

The oil, and petroleum products which were stored in the dome had been previously released into the water in the direct area, now it is confirmed as being sucked into the main water supply.

The sinkhole did not collapse into the aquifer, part of the aquifer and it's clay cap collapsed into the Deformed Rock Zone below and this is not a new development, it happened when the sinkhole first collapsed... dutch has got it all backwards and twisted beyond recognition. 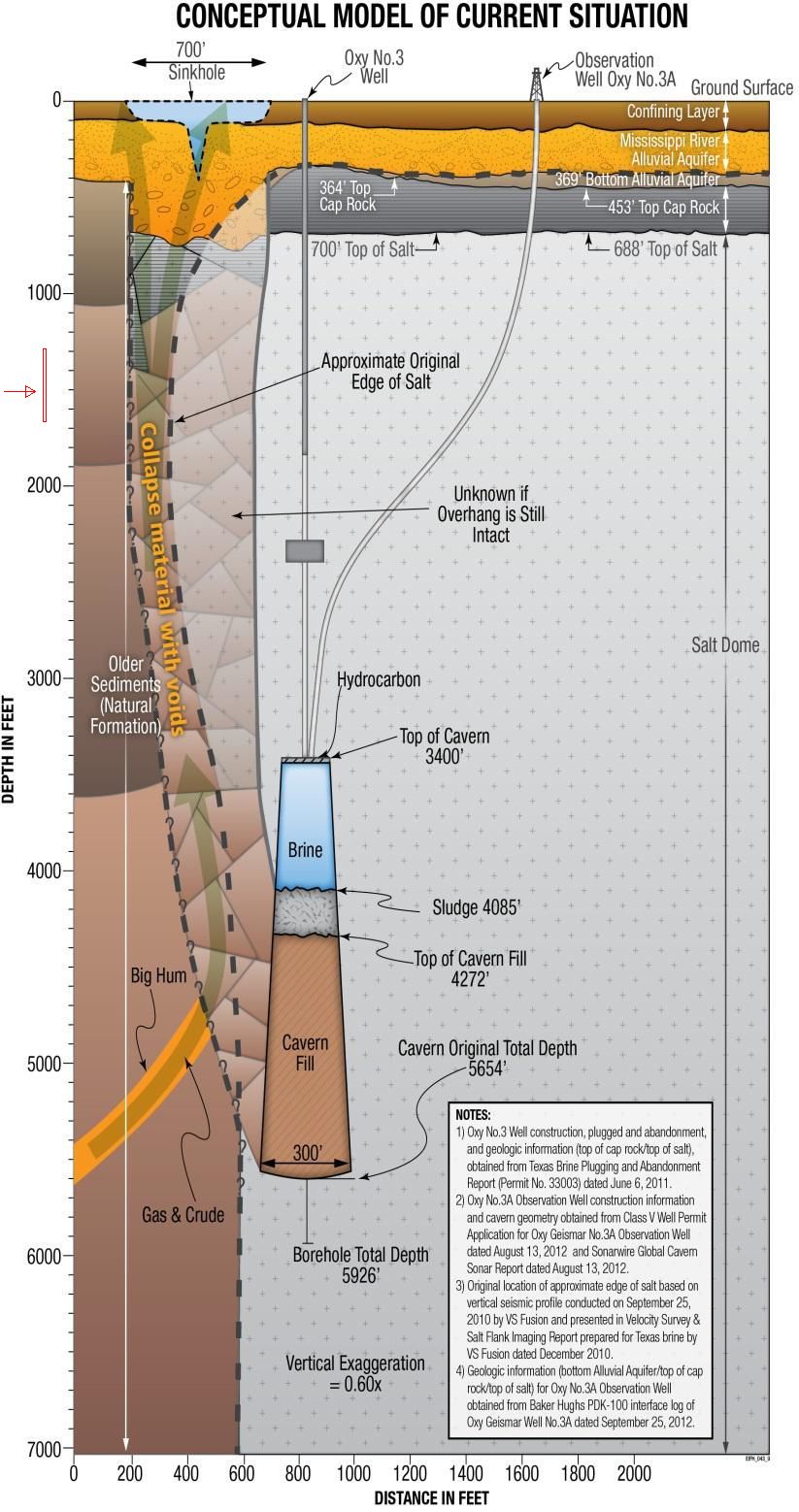 The MRA aquifer the speaker mentions is the Mississippi River Alluvial Aquifer, a shallow coarse-sand and gravel aquifer that actually lies ABOVE the Napoleonville Salt Dome. The MRAA "generally exceeds the U.S. Environmental Protection Agency’s (EPA) 2006 Secondary Maximum Contaminant Levels (SMCLs) for drinking water for color, iron, and dissolved solids." In Assumption Parish where the sinkhole is located, MRA aquifer water is only used for industrial purposes. It is not used for drinking water in that area "due to dissolved solids (5,000) andchlorides (2,500)."

Most aquifers, like the MRAA, are NOT big open chambers full of water. The geology of aquifers is almost always that of water filling porous spaces underground comprised of sand, gravel, rubble, porous rock like sandstone and fractures within impermeable rocks.

The biggest concern with the sinkholes effect on the MRA aquifer is natural gas, which is being vented/burned off, and the issue is confined to about 2 square miles around the immediate area.

Some general info on the MRA Aquifer in a nearby parish:

Some info about the geology of aquifers:

This is not an argument. It is a verification. According to the Louisiana Department of Transportation and Development. The Aquifer in questions is mainly used for industrial purposes, Other categories of use included public supply, rural domestic, livestock, general irrigation, and aquaculture.
http://pubs.usgs.gov/fs/2013/3061/pdf/FS13-3061.pdf
.