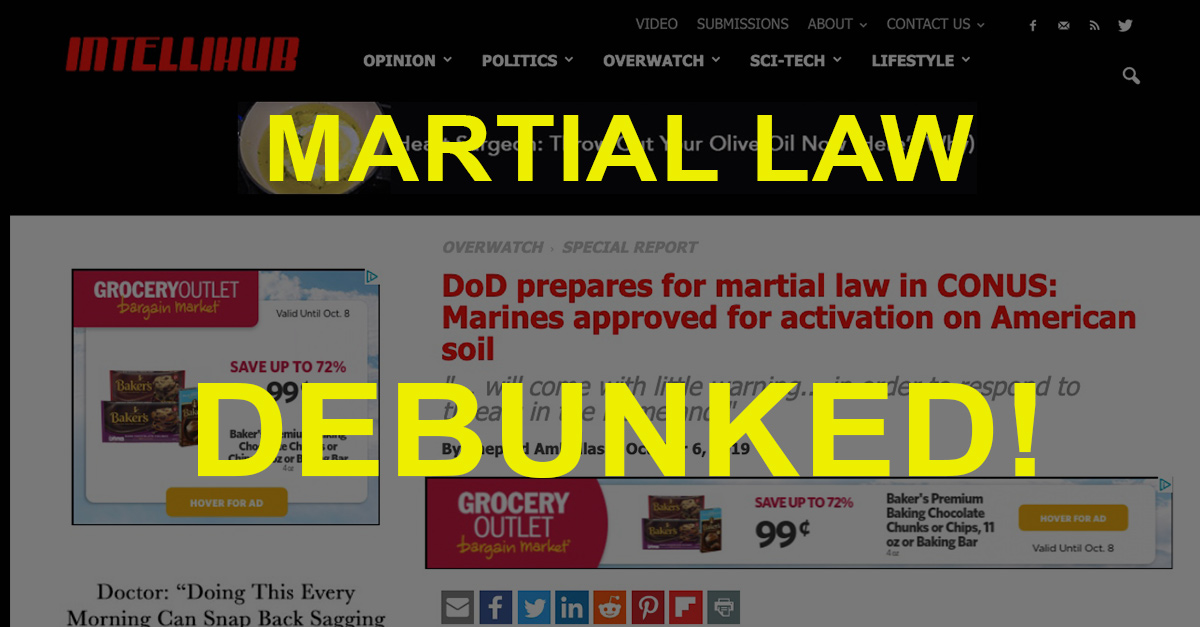 In an attempt to stir up fears of martial law, Shepard Ambellas posted this incendiary headlined article:
https://www.intellihub.com/dod-prep...ed-for-activation-live-fire-on-american-soil/

"... will come with little warning... in order to respond to threats in the Homeland."

The Department of Defense issued an order signed by Brigadier General Daniel L. Shipley, Director, Manpower Plans and Policy on October 3, 2019, which authorizes the rapid activation of military forces to protect civil authorities in response to a “major disaster or emergency.”

The order titled Manpower Guidance for Activation and Deactivation of Reserve Component (RC) Marines Ordered to Active Duty ISO Defense Support of Civil Authorities details how Marines will be called to “active duty” upon orders from the U.S. Navy.

Shockingly, one of the first paragraphs details how it “will come with little warning.”


Content from external source
The linked page is:
https://www.marines.mil/News/Messag...nd-deactivation-of-reserve-component-rc-marin

1. Purpose. This MARADMIN cancels MARADMIN 300/14. In accordance with (IAW) REF A, this MARADMIN provides guidance for the activation of Reserve Component (RC) Marines under §12304a, Title 10, U.S. Code, following a request for Federal assistance in response to a major disaster or emergency within the United States. Requests for Federal assistance will come with little warning. As required, the Marine Corps must rapidly mobilize RC units and personnel IAW this MARADMIN in order to respond to threats in the Homeland.

Content from external source
As it states, it's a new version of an old MARADMIN (Marine Administrative Message), actually from 2014:
https://www.marines.mil/News/Messag...f-reserve-component-rc-marines-iso-defense-su

1. PURPOSE. IN SUPPORT OF REF A, ESTABLISH SERVICE POLICY FOR ACCESSING 10 USC SECTION 12304A AUTHORITY TO EMPLOY READY RESERVE MARINES IN SUPPORT OF CIVILIAN AUTHORITIES. REQUESTS FOR DSCA WILL COME WITH LITTLE WARNING, REQUIRING THE MARINE CORPS TO ESTABLISH MANPOWER POLICY TO ENABLE RAPID MOBILIZATION OF UNITS AND INDIVIDUALS.

Content from external source
There is nothing in either one that discusses martial law. It simply is an update to an administrative document regarding the use of the Marine Corps Reserve to assist in a state emergency, like an Earthquake. There's language changes, minor regulation changes, and some clarifications. But nothing really new.

(a)Authority.—
When a Governor requests Federal assistance in responding to a major disaster or emergency (as those terms are defined in section 102 of the Robert T. Stafford Disaster Relief and Emergency Assistance Act (42 U.S.C. 5122)), the Secretary of Defense may, without the consent of the member affected, order any unit, and any member not assigned to a unit organized to serve as a unit, of the Army Reserve, Navy Reserve, Marine Corps Reserve, and Air Force Reserve to active duty for a continuous period of not more than 120 days to respond to the Governor’s request.

Content from external source
That's it. Nothing new, and not martial law.
Last edited: Oct 6, 2019
You must log in or register to reply here.