Debunked: Dead creatures cover 98% of the ocean floor, up from 1% before Fukushima

Staff member
This claim comes via Alex Jones, and Natural News. It's bunk, and of course it is linked to ads for the "health" products they are selling: 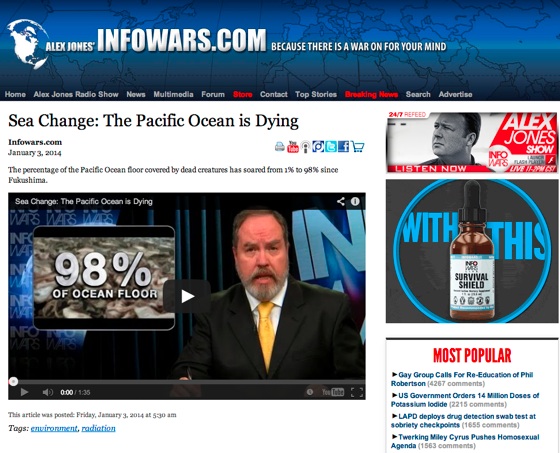 The percentage of the Pacific Ocean floor covered by dead creatures has soared from 1% to 98% since Fukushima.

The Pacific Ocean appears to be dying, according to a new study recently published in the journal Proceedings of the National Academy of Sciences. Scientists from the Monterey Bay Aquarium Research Institute (MBARI) in California recently discovered that the number of dead sea creatures blanketing the floor of the Pacific is higher than it has ever been in the 24 years that monitoring has taken place, a phenomenon that the data suggests is a direct consequence of nuclear fallout from Fukushima.

Reality: It was a brief localized surge in deposition of salp poop and bodies, in a 20 foot square, related to global warming, unrelated to Fukushima.

Salp are a kind of jellyfish with a pseudo-backbone. Their feces and bodies are an important part of the ocean's carbon cycle, which relates to climate change. So changes in salp poop deposition are studied by scientists.
http://en.wikipedia.org/wiki/Salp

Sinking fecal pellets and bodies of salps carry carbon to the sea floor, and salps are abundant enough to have an effect on the ocean's biological pump. Consequently, large changes in their abundance or distribution may alter the ocean's carbon cycle, and potentially play a role in climate change. 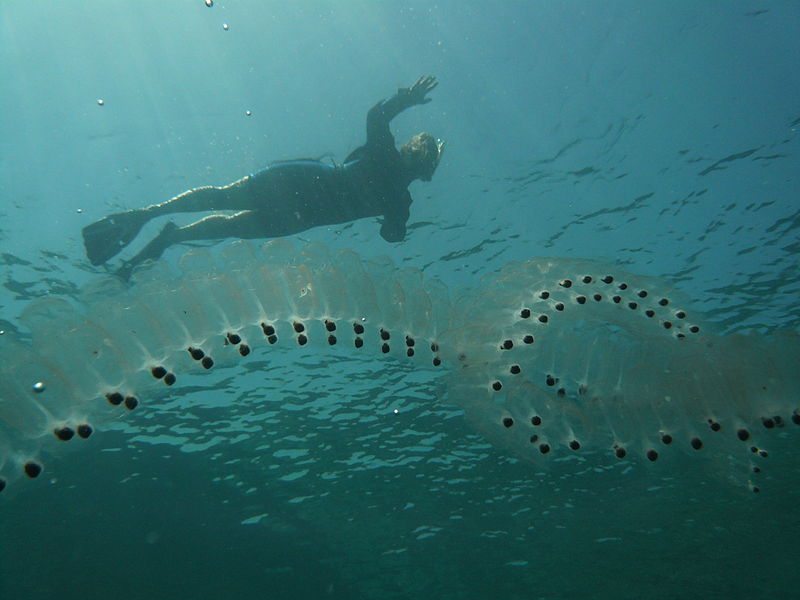 The deep ocean, covering a vast expanse of the globe, relies almost exclusively on a food supply originating from primary production in surface waters. With well-documented warming of oceanic surface waters and conflicting reports of increasing and decreasing primary production trends, questions persist about how such changes impact deep ocean communities. A 24-y time-series study of sinking particulate organic carbon (food) supply and its utilization by the benthic community was conducted in the abyssal northeast Pacific (∼4,000-m depth). Here we show that previous findings of food deficits are now punctuated by large episodic surpluses of particulate organic carbon reaching the sea floor, which meet utilization. Changing surface ocean conditions are translated to the deep ocean, where decadal peaks in supply, remineralization, and sequestration of organic carbon have broad implications for global carbon budget projections.

You can already see the story is not being reported at all accurately by Jones, et al. The study is nothing to do with Fukushima, and instead is about the effects of global warming on the ocean.

Fukushima happened in March 2011. The Figures of 1% and 98% simply relate to a seasonal surge of salp detritus (mostly fecal matter and the dead bodies of salps) at one spot that happened a year later. Important to note that the 1% figure was also a year after Fukushima.


The daily presence of detrital aggregates on the sea floor did not exceed 15% coverage over the period from 1990 to 2007. Detrital aggregates showed distinct seasonal variation, reaching the highest peaks in the summer of 2002 (< 15% cover), fall of 1994 (< 14% cover), and summer and fall of 2001 (<8% cover) (Fig. 1E). The highest sea-floor coverage by detrital aggregates measured throughout the 24-y time series occurred between March and August 2012, when salp detritus ranged from <1% cover in early March to a high of 98% cover on 1 July (Fig. 1E). This was the only measurable deposition event of salps observed during the entire time series. Following this salp pulse, phyto- detrital aggregates combined with some salp detritus formed another major deposition event beginning in late August and peaking in mid-September. This pulse covered up to 61% of the sea floor (Fig. 1E), the largest primarily phytodetrital aggregate peak recorded during the time series. Highs in relative sea-floor fluorescence accompanied both of these depositional events (Fig. 1E). The pulse of Rhizosolenia detected by the sediment traps in 2011 was not apparent in the time-lapse photographs because there were no large aggregations with dissimilar color- ation from the background sediment.

And the area of the sea floor is just one small region under a camera:


Given these data, we are referring to the salps on the sea floor of Station M. as Salpa spp. Although the biomass of net- sampled salps in surface waters near Station M was high in 2012, comparable levels were reported in previous decades (8).

A camera tripod at the base of the sediment trap mooring documented detrital aggregates in hourly photographs of the sea floor, and these images were analyzed using a Canadian grid system to estimate aggregate percent cover (9).

There was considerable variability in the EDR generated by Distance 4.1, leading to effective viewed areas ranging from 13 to 32 m2

So this measurement has nothing to do with die-offs, nothing to do with dead creatures littering the sea floor, nothing do do with Fukushima. It's to do with surges in the amount of carbon produced in the upper oceans, how this relates to climate change. And it's about how this created a temporary surge in salp poop in one area about 20 ft x 20 ft.

Staff member
The above story illustrate one of the reasons why I debunk. There are very real issues here. Climate change is a real issue. The effects of climate change on the ocean are very real, and could create major disruptions of the world's food supply, as well as having a feedback effect on the climate.

But by framing this research as being something to do with Fukushima, Jones diverts attention away from these very real issues. It seems like he is doing it simply to boost traffic to his site, and to boost sales of his branded supplements, like Infowars iodine, or Infowars organic coffee.

So real and important issues are being buried under bunk, just to make a buck. That's a big part of my motivation for debunking bunk. If people could focus on the real issues with the same intensity they focus on the fake ones, then that could actually make a difference.

Given these data, we are referring to the salps on the sea floor of Station M. as Salpa spp. Although the biomass of net- sampled salps in surface waters near Station M was high in 2012, comparable levels were reported in previous decades (8).

So actually there was an abundance of salps, which also means abundant algae which is their primary food source. Like many marine animals they can experience sudden population explosions, which would produce lots of excrement and other detritus, often followed by a mass die off as food supplies are exhausted.


By rhythmically contracting their bodies, salps propel themselves through the water and pump water through their guts, filtering out microscopic algae and other tiny organisms for food. This allows them to swim and eat at the same time. With such a simple feeding strategy, salps canmultiply very rapidly when they have plenty of food.


This spring peak was soon followed by another major sedimentation event to the seafloor in September 2012, which consisted of a combination of salp fecal pellets and phytodetritus (Fig. 1E). This pulse corresponded with strong peaks in surface chlorophyll, NPP, and EF (Fig. 1A–C).

Surface chlorophyll is related to the population of algae and other phytoplankton.

This is absolutely shameful and disgusting. I cannot believe Alex is going to run away posting misinformation and spreading fear just to make a quick buck.

And don't talk to Alex Jones about climate change! He thinks that's fake too.

Mick West said:
So real and important issues are being buried under bunk, just to make a buck. That's a big part of my motivation for debunking bunk. If people could focus on the real issues with the same intensity they focus on the fake ones, then that could actually make a difference.
Click to expand...

I think it's a common sentiment among debunkers. Here it is expressed by a marine biologist who coincidentally was also debunking some Fukushima nonsense.


The West Coast of the United States is being fried. It’s being fried by over-fishing, agricultural run-off, runaway development, and a host of other issues, but it’s not being fried by Fukushima, and articles that promote that fallacious argument are distracting us from the dominant causes of environmental degradation on our coasts: Us.

Thanks for the article Mick. I found it quite fascinating. Just to bore you all my honours was in Marine Biology and much of my post grad work based on the subject. This raised an eyebrow for me as a Dr Fraser studied salphs in the North Sea area. An example study here

I found a brief review of a paper of his from 1950 highlighting the temperature effect.

Sorry it made me smile as I thought"Oh I know that" ;-)

The figures just make me cringe anyhow... 1% to 98% of the entire ocean floor? Its things like this that remind me just how easily led people can be... Wouldn't anyone think that local fishermen might have noticed something? That kind of statistic would pretty much mean most living things in the ocean, and if so, I don't even think they could cover 98% of the ocean floor anyhow...

Clock said:
I cannot believe Alex is going to run away posting misinformation and spreading fear just to make a quick buck.
Click to expand...

For me, it's all too easy to believe. What I don't believe is that Alex really believes half the BS he spreads, I believe he's found a business niche, that of fear-mongering, and whatever decent motives he had way back when, they're gone. Alex is coining it, and as long as he's cashing in he's going to latch onto whatever drives his paypal. The man might have had pure motives to begin with, but those were the days.

Alhazred The Sane said:
For me, it's all too easy to believe. What I don't believe is that Alex really believes half the BS he spreads, I believe he's found a business niche, that of fear-mongering, and whatever decent motives he had way back when, they're gone. Alex is coining it, and as long as he's cashing in he's going to latch onto whatever drives his paypal. The man might have had pure motives to begin with, but those were the days.
Click to expand...

I think he believes the Bilderbergers rule the world, but it's hard to tell when he's so obviously into commercialization now. I seem to remember him being skeptical of the chemtrails theory, but now he embraces it.

This is exactly the type of bunk that comes to my mind whenever somebody tries to argue that Alex Jones et al. are just a good alternative to the mainstream narrative that maybe get a little overzealous. This type of bunk isn't overzealous. It can't be. It is so bad that it has to be deliberately wrong.

I think he's just cashing in on the widespread bunk already out there.

The following article was posted to a surfing forum that I read.

It claims that all manner of sea life deaths in the Pacific and Atlantic and even moose and deer die-offs result from Fukushima.

Fortunately the site that hosted that article published a rebuttal soon after. Of course there's been no mention of the rebuttal by the people that were hyping the radiation bunk on the surf forum.

Infowars is still pushing this story:

Is this untrue also?

Afro said:
Is this untrue also?

Ocean pollution is a real problem, and quite a major one. Just not from Fukushima.

Overfishing is also a real problem.
You must log in or register to reply here.

Investigated: "Why are massive numbers of sea creatures dying along the west coast"