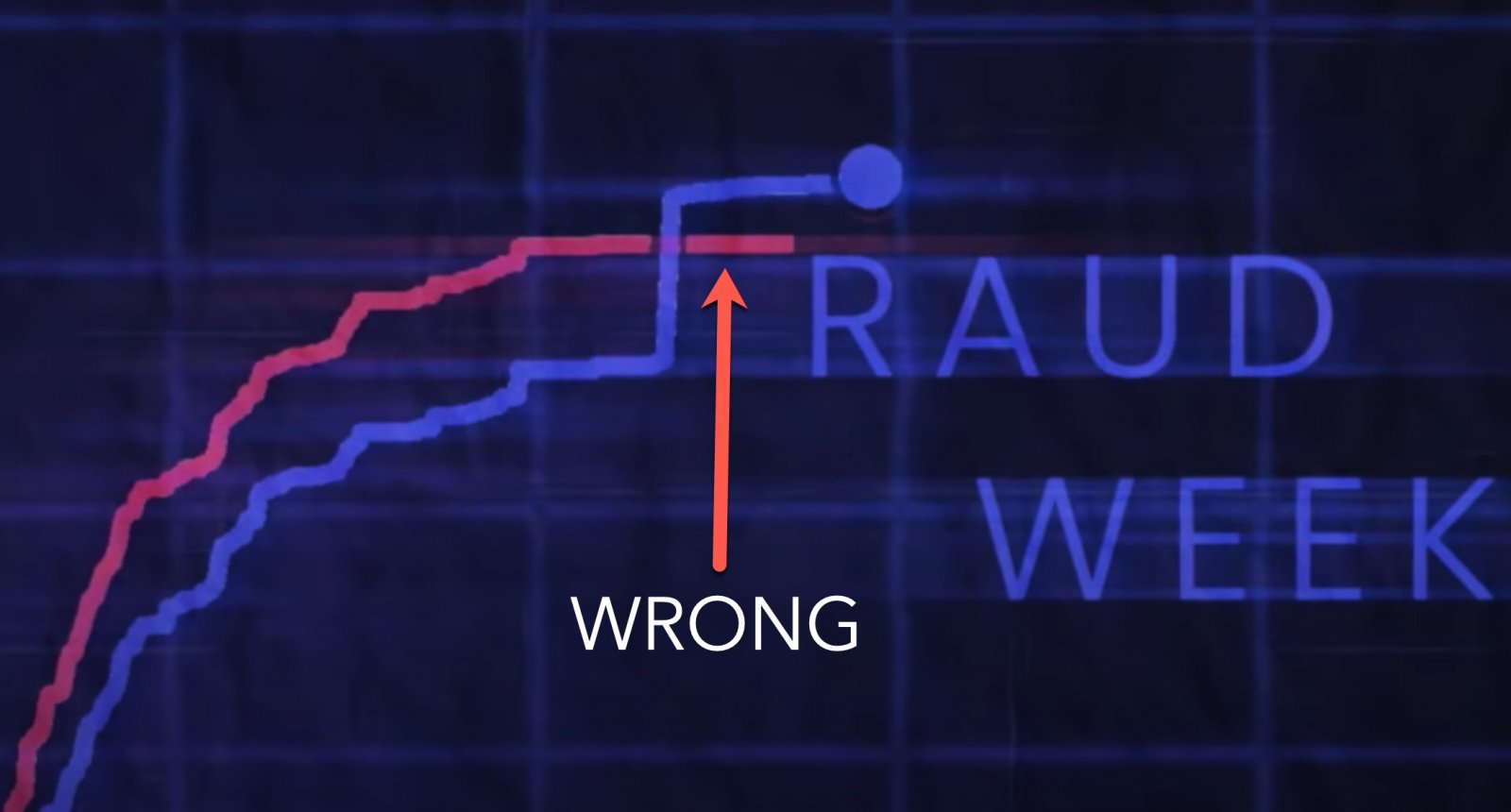 Steven Crowder, a political comedian, has a logo currently being used to introduce segments of his show where he promotes false or unproven claims of election fraud. It shows a red line for Trump and a blue line for Biden. Red is safely ahead, but then blue suddenly jumps up into the lead with no change in red.

This graph is based mostly on actual data, but with a little twist that makes it into a lie.

Have a look at the actual graph that spawned this theory, back on Nov 4. 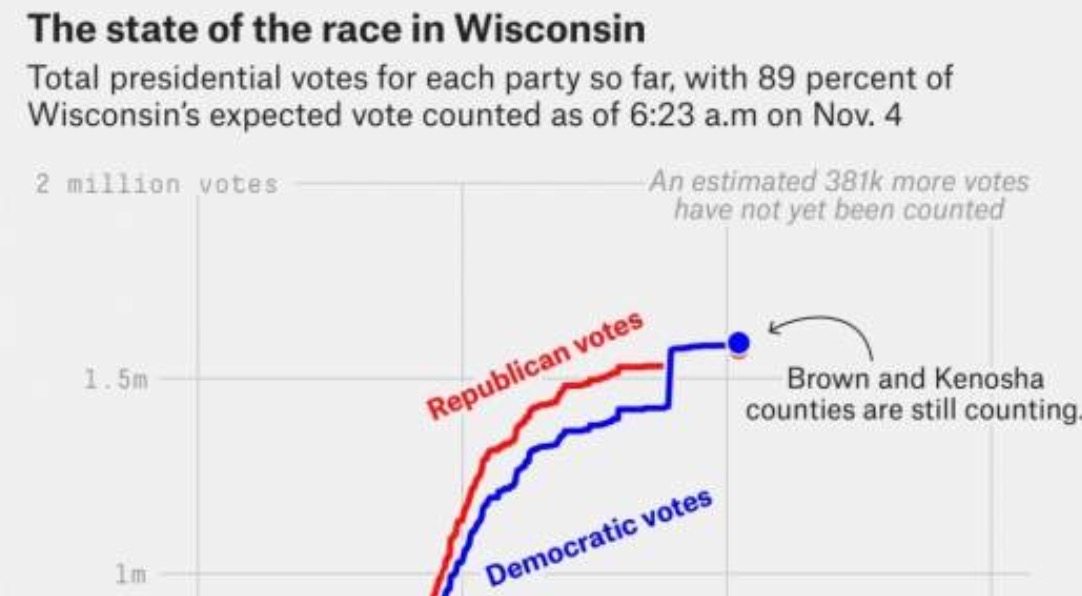 Same graph? Have a closer look:

The red line used to make the bar of the F is missing in the actual data. Where did it go? It went up. Trump's vote actually went up at the same time as Biden's, just not as much. You can see in this graph red (Trump) ends up just slightly lower than blue (Biden). Unfortunate the blue line on top has a white border that hides this. But if we redraw the graph from the actual NYT data, we can see what is happening. 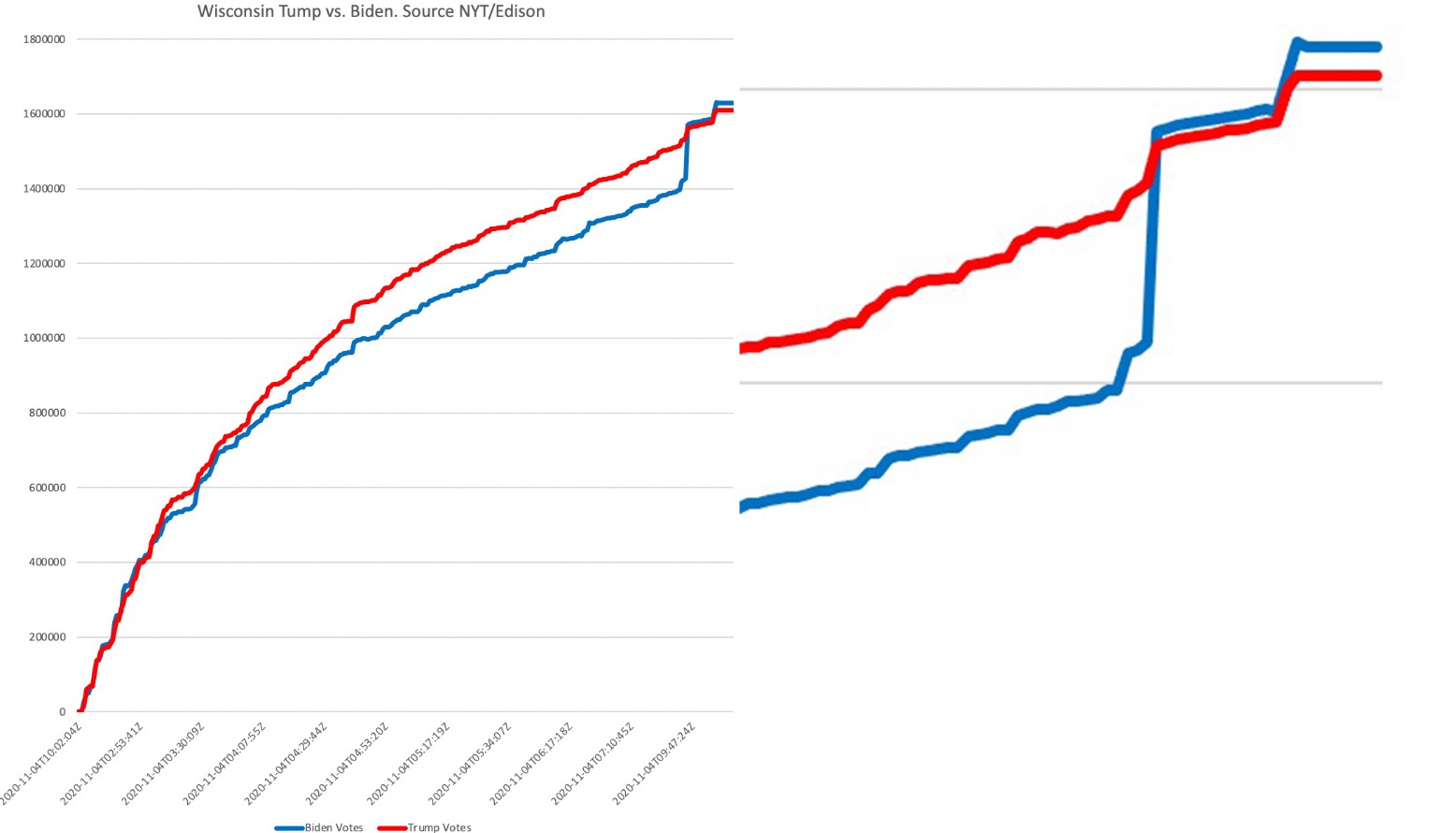 In this more detailed data, we see the two races going up fairly smoothly with Trump ahead, then there's series of three jumps, with the second one being the large jump for Biden, and a smaller (but still substantial) jump for Trump, bringing them together.

This was noticed at the time, gave rise to allegations of election fraud, and then was explained by literally dozens of outlets. The explanation is quite simple. The large jump was the reporting of mail-in ballots from Milwaukee City, which was a very large chunk of votes, which were expected to be reported at about that time all at once (as they used a central counting location), and were expected to go for Biden, as historically that region has been heavily democratic. Here's an example debunk from the time (Nov 4, more than two weeks ago)


Democratic nominee Joe Biden passed Trump in Wisconsin about 3:30 a.m. on Nov. 4 because the City of Milwaukee reported its 170,000 absentee votes all at the same time. The votes were reported together because Milwaukee and 38 other communities used a central count location. Other communities counted absentee ballots at the polling places, and reported them earlier along with their in-person vote totals.

Biden doing well in Milwaukee absentee ballots should be the furthest thing from a surprise. In 2016, Hillary Clinton won the city of Milwaukee by 77%-18%. And polling leading up to the election showed 81% of the people planning to vote absentee in Wisconsin supported Biden.

But Crowder's graph goes beyond this. By extending the red line horizontally it makes it look as if there was a huge increase for Biden, but zero for Trump, something that's impossible, but not something that happened.

Why does it matter? Is it just a bit of graphical license by a humorist?

It matters because a claim of evidence being conclusively debunked does not make it go away. Conspiracy theories are founded and sustained by mythological claims that were long ago proven to be nonsense. JFK's assassination had a "magic bullet" trajectory, which was false. Chemtrail believers claim that contrails can't persist, which is false. And now election fraud theorists have "huge spikes just for Biden in the middle of the night." Unless these claims are vigorously and continually addressed they will continue to take hold, regardless of the fact that they are demonstrably false.

It's not just Crowder. Two weeks after the claim was conclusively debunked, Trump tweeted it, and a similarly false claim about Michigan, to his millions of followers. Same data, different graph, same falsehood.
https://twitter.com/realDonaldTrump/status/1329602736053252107

So no, it's not just a fun graphical choice. It's part of a pattern of disinformation and lies that are doing significant and unwarranted harm to the nation's faith in the electoral process, and dangerously delaying the transition of power. Trump is doing it with Twitter. Crowder is doing it with jokes, but he's still doing it. It's dangerous, and it should be addressed.

Staff member
After writing this I went to check on YouTube, and this repetition of the mythology was at the top.