The odds are astronomical: 30 years ago, when Alex and Donna Voutsinas lived in different countries and long before they met and married, they were captured in the same photo at Disney World. That's Donna at right in front. Alex is in the stroller in the background immediately behind Mr. Smee. 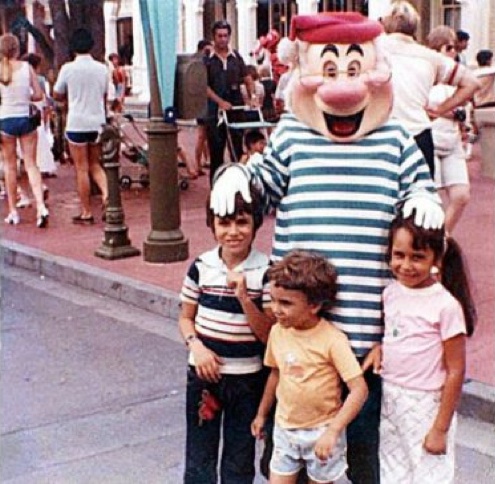 But how amazing is it? Does it actually mean anything? What actually are the odds? There are number of ways of calculating it, depending on how you phrase the question. Let's phrase it as:

"How many times a year will someone marry someone who appeared in the the background of a Disney World photo trip?"

Let us try to make some reasonable estimates. Let's say every family who visits Disney World takes 20 photos, and in each photo there are about 10 recognizable people in the background. So you've got 200 random people. Probably half are children, and half of them are the opposite gender, so 50 potential mates.

Let's say everyone who visits Disney World marries a random person within about 10 years of their age. Now each year 16 million people visit Disneyland, say 8 million young unmarried people (children and young adults). Very roughly for each person there's about 80 million people within the same +/- 10 year age group, half in the opposite gender (I'm just assuming opposite gender as 99% of marriages are that way), so 40 million.

However, given that 8 million young people visit Disney World per year, then the odds of it happening at all is about one (8/6).

So the answer to ""How many times a year will someone marry someone who randomly appeared in the the background of their Disney World trip photos?" is "about once per year"

Alex and Donna just happened to be the lucky couple for that particular year. It's like winning the lottery. It's got to happen to someone.

Now this is just an estimate, as the figures are estimate. But it's in that ballpark.

I've labeled this as "Debunked: Coincidences", because people often think there is meaning in a coincidence because it's so improbable. People have probably suggested that Alex and Donna were "meant to be", because of the 1 in 6 million odds of this thing happening to them. But this ignores the fact that it was bound to happen to someone, and that someone was simply random.

Then of course, there's the question of is it REALLY the same two people or does the person in the background just LOOK like the other?
You must log in or register to reply here.