Debunked: Article: "Court Takes Child From Mother After She Mentions Chemtrails At School"

Mick West said:
I think the disagreement from @narcosys boils down to my use of the work "debunked". Which I use to mean pointing out the inaccuracies in the article…
Click to expand...

Why don't you put the article title in quotes? It should resolve the confusion.

Trailspotter said:
Why don't you put the article title in quotes? It should resolve the confusion.
Click to expand...

Done. And also added a link to the article, which I somehow forgot.

Mick West said:
Maybe the title would be better if I changed it to "Debunked: Court Takes Child From Mother Simply Because She Mentions Chemtrails At School", but then that's not the title of the article being debunked, just essentially what the article is claiming.
Click to expand...

Then just apply the debunk to ALL articles claiming this:

(interesting when MB shows up is says "claim" not debunked...)

As the child of a family court judge who, I will disclose was once accused of colluding with Microsoft and the South African government to ruin a mans life, I will tell you the number one reason why this woman lost her case. She couldn't hire a lawyer and didn't act like a lawyer in presenting her own case. After that the lack of stable housing was probably what doomed her. Now in the broad scheme of things this is tragic, but it's a tragedy that occurs in many custody cases. A lawyer for instance knows that when a judge rolls her eyes it is time to change the topic.

Having said that let me point out two details of interest. She mentions that she lost child support payments. So she did have custody and then lost it later on. This makes the situation more dramatic but custody cases can take a while and be dealt with in stages. Perhaps she had interm custody but lost the final decision. Perhaps the father accepted the arrangement at first but then applied to change it. The second detail to note is that the husband works in an industry that she is hostile to. Maybe she was keeping that hostility out of their personal interactions, but in many custody cases the bitterness and suspicion just gets more dramatic as the fight goes on. In such a case a judge will absolutely rule against the parent who presents as the mentally ill one, expressions of hostility will be a factor. that is why it's best to have a lawyer. Now having supervised visits is a dramatic and unusual step. court documents would help shed light on that if we had any to look at. I feel great sympathy for anti government sentiments. An increasingly muscular child protection system and societies reliance on the courts to dissolve marriages has certainly added to social tension and mistrust.

That was the original title, I changed it after I'd added some more material, and thought about it (which shows up in the cached version, as I did not change the title immediately)

Northern-nosypants said:
Having said that let me point out two details of interest. She mentions that she lost child support payments. So she did have custody and then lost it later on. This makes the situation more dramatic but custody cases can take a while and be dealt with in stages. Perhaps she had interm custody but lost the final decision. Perhaps the father accepted the arrangement at first but then applied to change it.
Click to expand...

Again, with more knowledge of the case this makes more sense.

This was posted by the father in October 2013 and it's clear that the mother's home life was anything but stable, albeit partly due to outside influences.

(I've blurred out some irrelevant personal stuff about school) 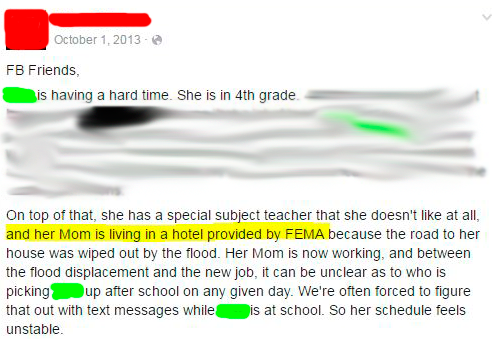 From the Facebook page, late 2013 seems to be around the time the girl spent most of her time at the father's house. I'm sure this would have been taken into account too.

Just so I'm clear, my problem with the original framing (prior to the court document point addition) was mainly that it seemed to rely on the reader making a "reasonable" judgement of what had actually happened, rather than a "one size fits all" debunk that could only be disputed with clear facts.

Personally, I look at her posts and see she was in a poor financial situation, potentially homeless, had problems with the school, was contesting custody with an ex-partner who was clearly more financially secure and could very likely provide a more stable home environment. Even without getting into conjecture about her character, behaviour or mental state, it seems perfectly reasonable that the court would decide to take those things into account when deciding on custody. So for me and anyone else like me, simply pointing out that there were plenty of other things going on besides the "chemtrail" thing is enough to reasonably debunk the story.

The problem I see is that the people these sites are targeting believe that the most "reasonable" scenario is actually that the school or state initiated the separation somehow, purely because she expressed her beliefs. These are the people who really "need" a solid debunk, because otherwise they can discount any explanation as opinion, or liberalism, or bigotry, or whatever, and they're the ones who'll likely be spreading the "bunk" further (as with the version of the UKIP child snatching story). We can try and convince them by saying "No, look, there's all these other factors too that the court would have had to consider", but it's unlikely to be effective, there needs to be "facts", things that can only really be disputed by presenting evidence.

That's why I think the point about there being no evidence of the author having access to court documents is really the key, it's a "fact" unless it can be proved otherwise (along with other points you mentioned). Given the entire article looks to have been C&P'd from Becca's blog and he only seems to know her by her social media name, that looks to be pretty unlikely.

NoParty said:
I think you're right, deride, on the click-bait point in general, but I also think that the "chemtrailers"
have a specific interest in peddling this dubious narrative as a "We're being persecuted!" tale.

Which probably makes sense: they're losing the battle to convince people that their unconventional
science is true, so why not try to shift everyone's attention to something else, like politics?
(Note that narcosys tried to cast it as "the left" being unfair to the right...)
Click to expand...

I think it goes beyond click-bait, it's more like rabble-rousing.

I found it interesting that praisekek brought up the UKIP thing. Elements of the (mainly gutter) press here did frame that story with misleading headlines that implied that a couple had had their biological children taken away, whereas the truth was that a local authority had reversed a decision to allow them to act as temporary foster parents to some immigrant children (a decision I believe the authority eventually apologised for). At least most of those stories did include the actual truth within the article.

Here we have the alternative media using exactly the same tactics as the mainstream press, although Infowars had to go one step further and completely invent the "child seized" angle.

Staff member
Not all conspiracy theorists are not falling for this one:

The video basically repeats the same information in the OP here, and reaches a similar conclusion.

narcosys said:
It is a slippery slope to deem parents unfit solely based on their beliefs, especially if they happen to be against mainstream.
Click to expand...

It's not about "mainstream". It's about her beliefs being wildly opposed to verifiable reality. OR, do you find the belief that commercial airliners are "spraying" the population to be a reasonable view?

Mick West said:
Not all conspiracy theorists are not falling for this one:

The video basically repeats the same information in the OP here, and reaches a similar conclusion.
Click to expand...

Ha- I had forgotten aboot (my canadian accent) her- She is still at it I guess. Glad she looked at it more rationally. (how can she not apply that same approach to "chemtrails" in general and find out it similar narrative manipulation?)

I wonder if she got the information from here?

Yeah she had no lawyer and that right there put her at a disadvantage.
You must log in or register to reply here.