Debunked: "All we need is the right major crisis and the nations will accept the NWO"

This present window of opportunity, during which a truly peaceful and interdependent world order might be built, will not be open for too long - We are on the verge of a global transformation. All we need is the right major crisis and the nations will accept the New World Order.
Click to expand...

Description: David Rockefeller supposedly said this on Sept. 23, 1994 at a meeting with the UN. The only sources to cite this quote are conspiracy websites.

The Truth: The quote was modified from a televised speech Rockefeller gave at the UN in 1995

"This present window of opportunity which during a truly peaceful and interdependent world order might be built will not be open for too long.Already there are powerful forces at work that threaten to destroy all of our hopes and efforts "
Click to expand...

I thought I'd have another look at this quote and see if I could see where it might have come from. Stuck it into google and changed the timeframe to rollback the years and I get a few hits.

One, dated to April 19th, 1995, is FINAL WARNING: A History of the New World Order by David Allen Rivera. There it's recorded like this:

So though this is very much an anti-establishment document, the first part of the butchered quote is given in full, and the two quotes are kept separate.

Also useful here is the date given for the talk at the UN. While the OP quotes conspiracy websites as giving a date of September 23rd, 1994 and states it was actually from a television speech given in 1995, Rivera's document gives the correct date of September 14th, 1994, as can be confirmed by viewing the source video at C-Span's website:

This also reveals that the occasion was actually "the annual ambassadors' dinner" - as part of which the U.N. Business Council awarded Rockefeller its annual medal.

Regarding the date for Rivera's document, however, I notice that he mentions events that took place after 1995, so the google dating must be wrong (it's actually the date for his opening quote). The latest event he mentions is from December 2003 - while he was "in the process of re-editing the book" - so that seems to be the date for his use of the quote.

Looking for an earlier version of the rogue second quote, I find many plenty of websites listed by google as predating 2003, but I notice most of them are stated as being from the 1st of January or February, which is a redflag for incorrect dating information, or are obviously from a later date. The oldest websites that seem to be from the correct time are ontopofacloud.com/newworldorder.htm (July 2000) and sdadefend.com/Watching-Waymarks/vatican.htm (April 1999) - the latter of which is the only place I've seen a citation for the quote:

So I guess Newsweek, January 1991 is where we need to be looking.

If you're looking for 1991, then the context is the fall of the iron curtain: "This present window of opportunity which during a truly peaceful and interdependent world order might be built will not be open for too long." In that case, the big change is free markets now having taken over Russia and the rest of the former Soviet Union, and China.

The dissolution of the Soviet Union,[a] or collapse of the Soviet Union, was the process of internal disintegration within the Union of Soviet Socialist Republics (USSR), also referred to as the Soviet Union, which began in the second half of the 1980s with growing unrest in the national republics and ended on 26 December 1991, when the USSR itself was voted out of existence by the Supreme Soviet, following the Belovezha Accords.

I also wouldn't be surprised if Rockefeller used this line in 1991 and 1995, a speech like that might have been originally held in 1991, and and could have been edited or have pieces re-used for the 1995 occasion.

Mendel said:
A speech like that might have been originally held in 1991, and could have been edited or have pieces re-used for the 1995 occasion.
Click to expand...

As for the context - news coverage was much more focused on the Gulf War in January 1991. And the above snippet you quoted is from 1994, not 1991. It's the other part of the quote we're looking for: "on the verge of a global transformation".
Last edited: Apr 7, 2020

Rory said:
sdadefend.com/Watching-Waymarks/vatican.htm (April 1999) is the only place I've seen a citation for the quote:

So I guess Newsweek, January 1991 is where we need to be looking.
Click to expand...

These are the issues of Newsweek from January 1991:

I'm not sure if there was a non-special issue on January 28th - I'm leaning towards not - and the only issue I've found digitised online is the "America at War" one, but there's no mention of Rockefeller or anything resembling the quote.

As for the context - news coverage was much more focused on the Gulf War in January 1991. And the above snippet you quoted is from 1994, not 1991. It's the other part of the quote we're looking for: "on the verge of a global transformation".
Click to expand...

And I don't care what was on the news; the Trilateral Commission would have been mindful of the long-term impact that the impending collapse of the Soviet Union would have, this was a predictable global transformation, and the Iraq war was not.
If Rockefeller said "verge of a global transformation" in 1991 in a political context, I would have expected him to refer to that. If he's on the verge in 1991, and the "window of opportunity" is open in 1994, that makes perfect sense.

Well, before we debate why he said it, or what he might have meant by it, let's find out if he did actually say it first. 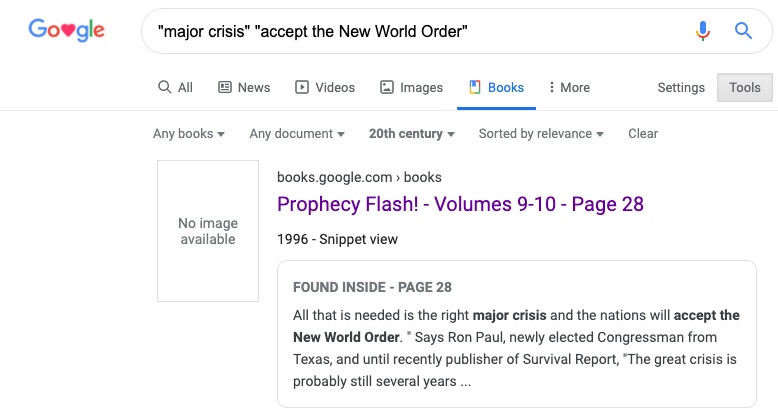 No longer relevant snippet is available.

The continuation of that supposed Ron Paul quote reads:

The great crisis is probably still several years off, but even under today's circumstances, some unknown political or economic event could suddenly undermine the weakening confidence that holds the system together.

I don't see anywhere else online recording something like that.
Last edited: Apr 7, 2020

I suppose the title of the thread should be changed back to "Claim" rather than "Debunked"?

Rory said:
I suppose the title of the thread should be changed back to "Claim" rather than "Debunked"?
Click to expand...

Good find with the "America at War" article - I didn't see any mention of Rockefeller or the quote either, but there were a couple of mentions of "new world order" to point out.
One is a cartoon and aside on page 11 that references a speech by George H.W. Bush, and there is an article starting on page 44 penned by Henry Kissinger which contains:

Today, it translates into the notion of "a new world order,” which would emerge from a set of legal arrangements and be safeguarded by collective security. The problem with such an approach is that it assumes that every nation perceives every challenge to the international order in the same way, and is prepared to run the same risks to preserve it. In fact, the new international order will see many centers of power, both within regions and between them. These power centers reflect different histories and perceptions. In such a world, peace can be maintained in only one of two ways: by domination or by equilibrium.
Click to expand...

C
My girlfriend,Jungian Personality Theory and the Rabbit Hole (Dealing with Relationships)