It is claimed by conspiracy theorists that, at the time of the airplane impacts, explosions took place in various parts of the World Trade Center, including the subway tunnel that ran below it. At the 45:17 mark in the 2014 David Hooper film, The Anatomy of a Great Deception (viewable in its entirety at youtube.com/watch?v=l0Q5eZhCPuc ), Hooper presents a clip from an ABC News report presented at 12:27 PM on 9/11 where reporter George Stephanopoulos says the following: 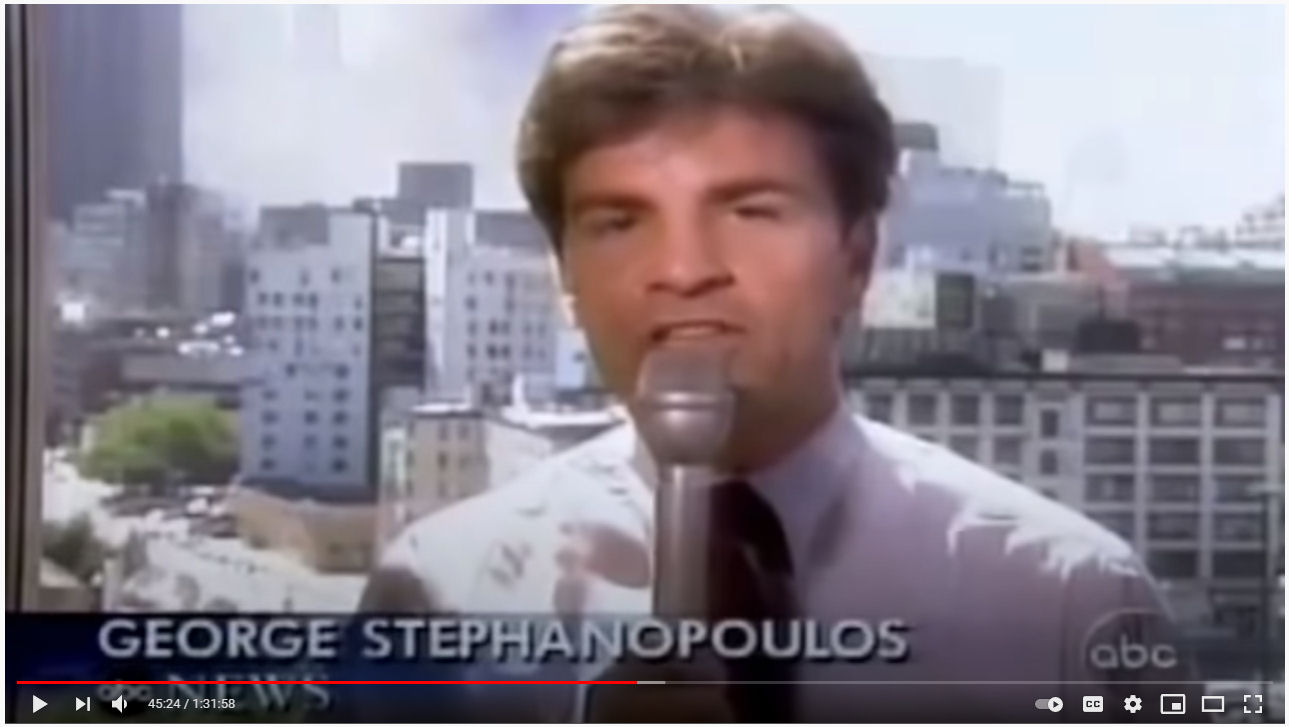 From the video clip, it seems as if Stephanopoulos could indeed have been reporting on a bomb detonated in the subway tunnel at the time of the AA Flight 11 crash. However, in the parts of the news report not presented by Hooper, it becomes clear that what Stephanopoulos experienced was actually effects from the collapse of the WTC twin towers. Below is a more complete transcript (from www.youtube.com/watch?v=VCOYdeJd7do ):

The WTC South Tower sat over a PATH subway station and when it collapsed at 9:59 AM, the subway station was heavily damaged. Dust and smoke entering the subway tunnel after the collapse was most likely the “first explosion” that Stephanopoulos mentioned. The North Tower collapsed at 10:28 AM resulting in the “soot” blizzard Stephanopoulos experienced as he emerged from the Park Place subway station at 10:35 AM and that he referred to as the second explosion. By omitting the parts of the news report containing a timeline for the events George Stephanopoulos experienced, Hooper and his Technical Director, Richard Gage, create false evidence and deceive their audience.
Last edited: Aug 30, 2021
M

Banned
We could break it down with one simple fact, there was so much kerosene (jet fuel) that poured down escalator shafts that compression of air in the pancake theory and burning articles from the top of the building would cause explosion. In mining it’s not the explosive that shatters a ledge. They drill into it, fill it with diesel (just slightly different than kerosene) then plug the hole with gelignite. The geligniite compresses the diesel and that causes the main explosion. Same in a diesel car, no spark plugs, the piston rises causing hot, dense compressed air and the diesel is injected (on modern cars with computer control the injector may open and close hundreds of times a second to get the correct mixture) and bang…. Well in the trade they know it does not actually explode but burns quickly.
You must log in or register to reply here.