Staff member
A claim by the promoters of the the 9/11 controlled demolition theory is that the dust clouds that were pushed up and out by the collapse of the building were "pyroclastic-like", specifically:

Pyroclastic-like, rapidly expanding dust clouds after the destruction of the Towers can also be explained only by the expansion of hot gases.

The reference that AE911Truth uses to back this up is the site 9-11 Research, a web site that was created in 2003 by Jim Hoffman. Hoffman was a seminal figure in the 9/11 Truth movement, and his early writings were highly influential on the shape that the conspiracy theories took over the first decade after the attacks. Some of his early ideas were quite outlandish, such as the suggestion that the Twin Towers were blown up by the carefully timed detonation of 1.8 million individual explosives disguised as ceiling tiles.

The "pyroclastic flow" claim of evidence is another Hoffman invention, but one that the 9/11 Truth community has been unable to let go of. Here's the calculation that Hoffman used to justify the claim: 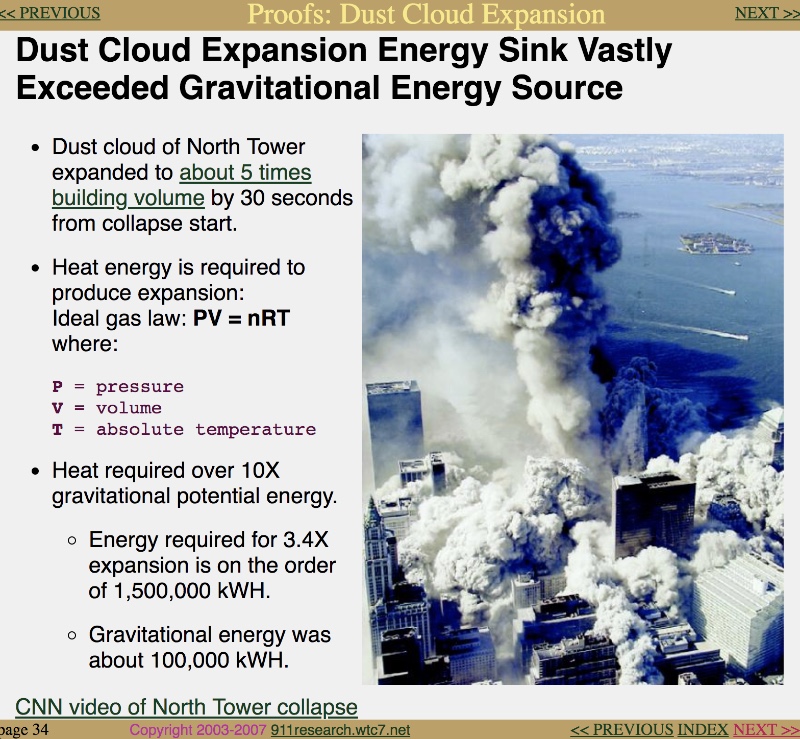 A second energy sink, that has apparently been overlooked, was many times the magnitude of the gravitational energy: the energy needed to expand the dust clouds to several times the volume of each tower within 30 seconds of the onset of their collapses. Note that the contents of the dust clouds had to come from building constituents -- gases and materials inside of or intrinsic to the building -- modulo any mixing with outside air. Given that the Twin Towers' dust clouds behaved like pyroclastic flows, with distinct boundaries and rapidly expanding frontiers (averaging perhaps 35 feet/second on the ground for the first 30 seconds), it is doubtful that mixing with ambient air accounted for a significant fraction of their volume. Therefore the dust clouds' expansion must have been primarily due to an expansion of building constituents.

Note this is already based on an unfounded assumption - that mixing with ambient air is "doubtful".

He then proceeds to give a detailed explanation at how he arrives at the very high energy requirements. The base of this calculation is:

According to the ideal gas law, expanding the gasses 3.4-fold requires raising their absolute temperature by the same ratio. If we assume the tower was at 300 degrees K before the collapse, then the target temperature would be 1020 degrees K, an increase of 720 degrees.

This claim can be debunked quite simply by the observation that no such temperatures were observed in the cloud of dust. We've all see videos and photos of the cloud moving down the street, engulfing people and cars, and we've seen the people afterwards covered in dust. 1,300°F is very hot, hot enough to melt aluminum. Any human caught in a cloud of such superheated gas would instantly suffer third degree burns and die. But they didn't.

For example, Dr Mark Heath was filming when the North tower collapsed. On the corner of Murray and West, we was engulfed by the cloud of dust, which was so dense it blacked out all light, and yet he was uninjured. 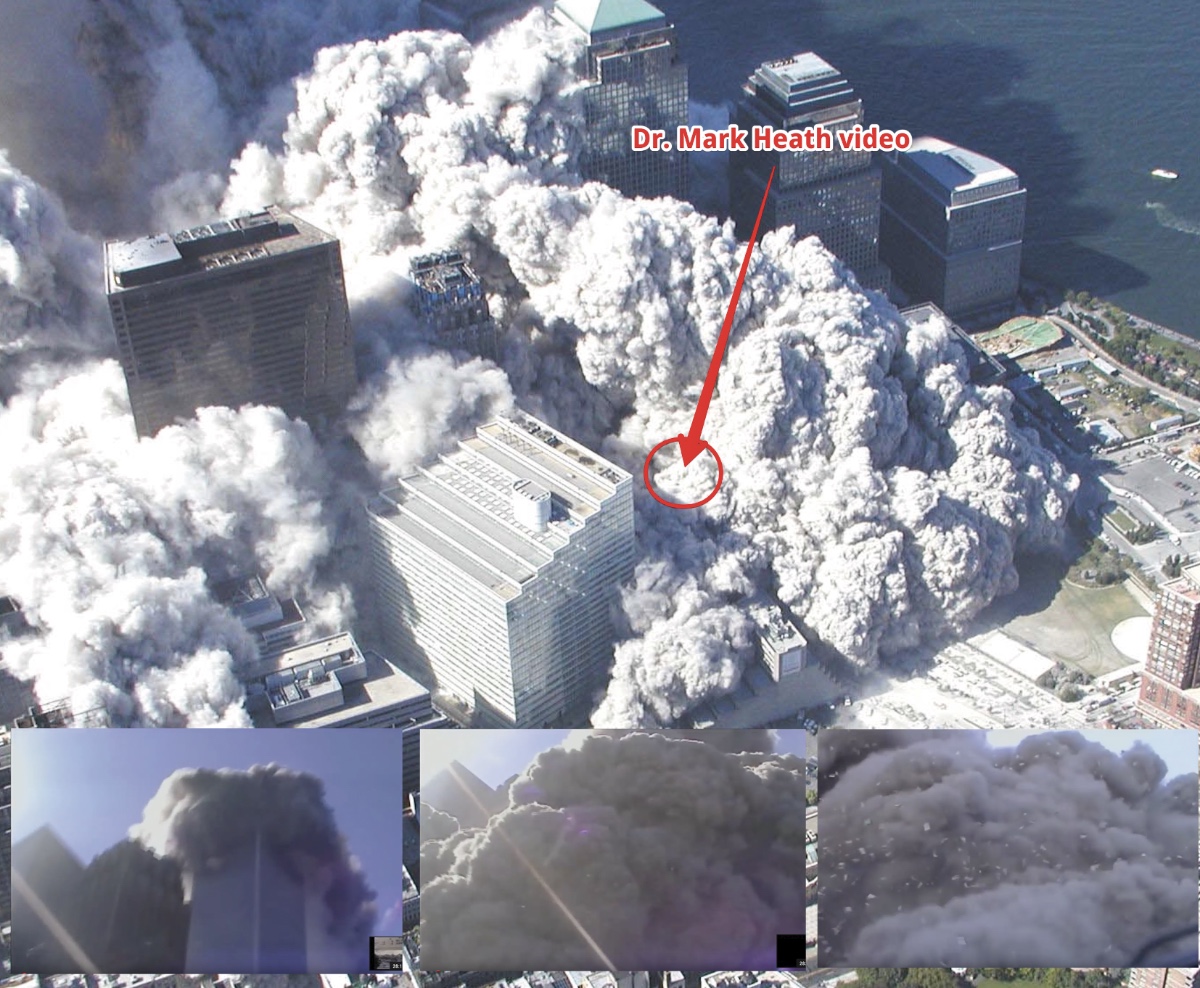 Another example is in this AP Video, shot on the corner of Murray and Church, also during the North tower collapse. Again the dust is so dense it blacks out the sky, but again it's not hot enough to injure anyone despite the dense cloud moving very rapidly along the street 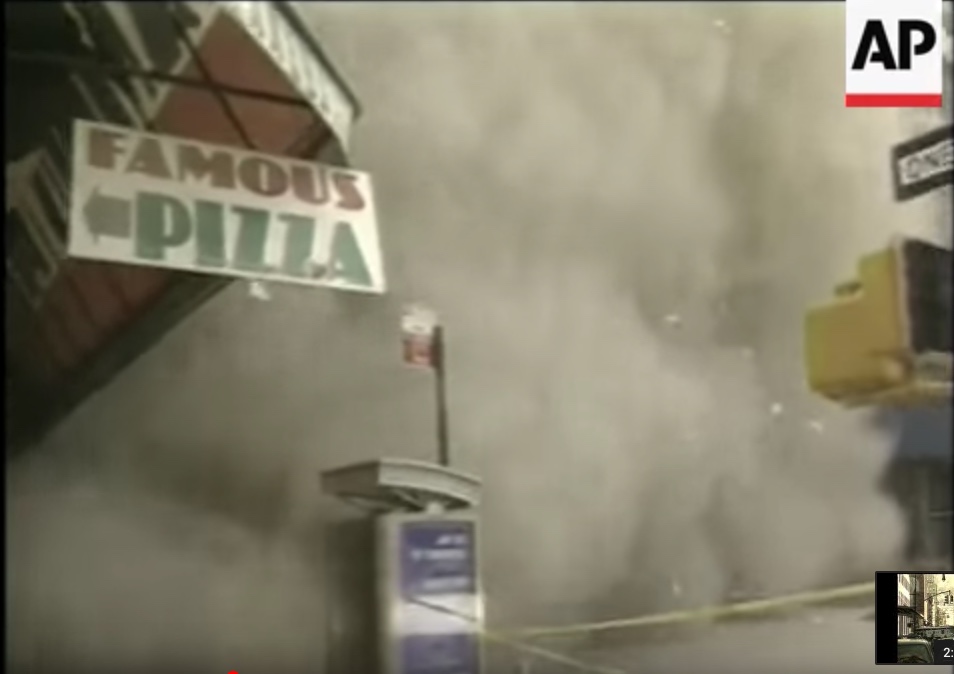 Besides this lack of burning heat, there's another problem. Expanding clouds of dust are a common feature in all kinds of building collapses, including those that do no use explosives. Here's a building collapsed in Italy, leaving a cloud to dust several times the size of the building: 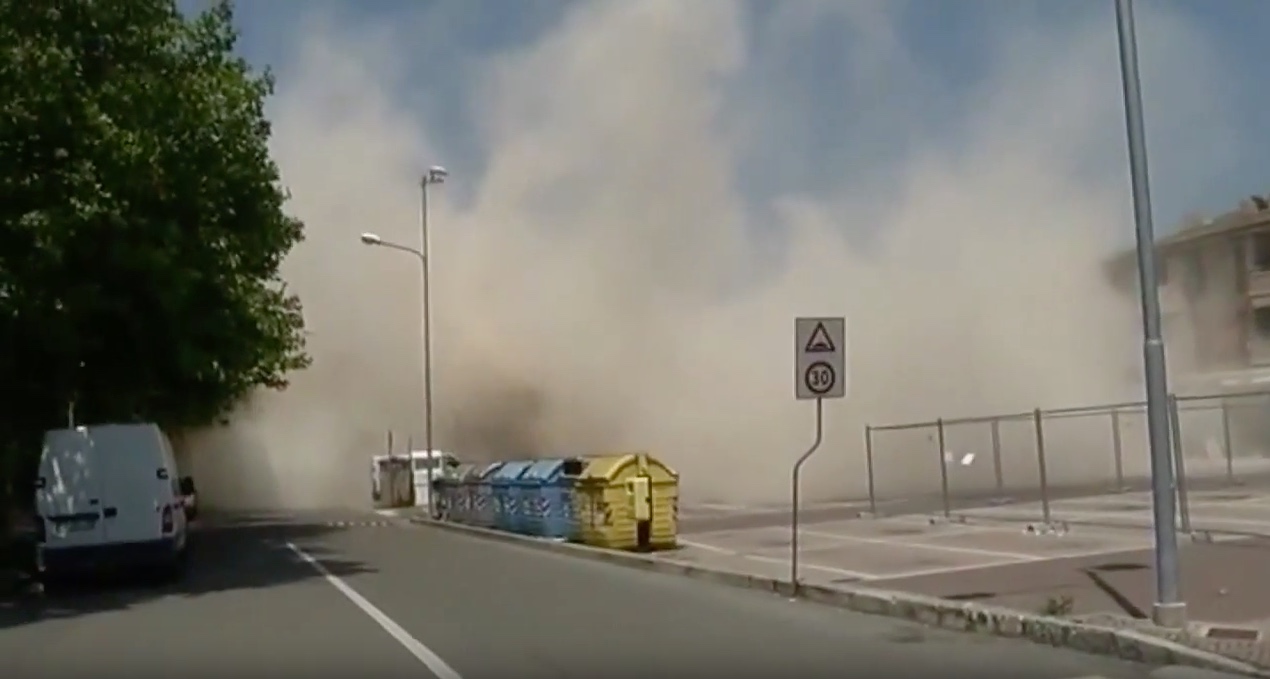 Here's another earthquake collapse. The roof of a church falls, creating a cloud of dust identical to the WTC cloud with sharp edges, eventually filling the entire church, many times larger than the segment of roof that fell. Yet this is all just from gravity. 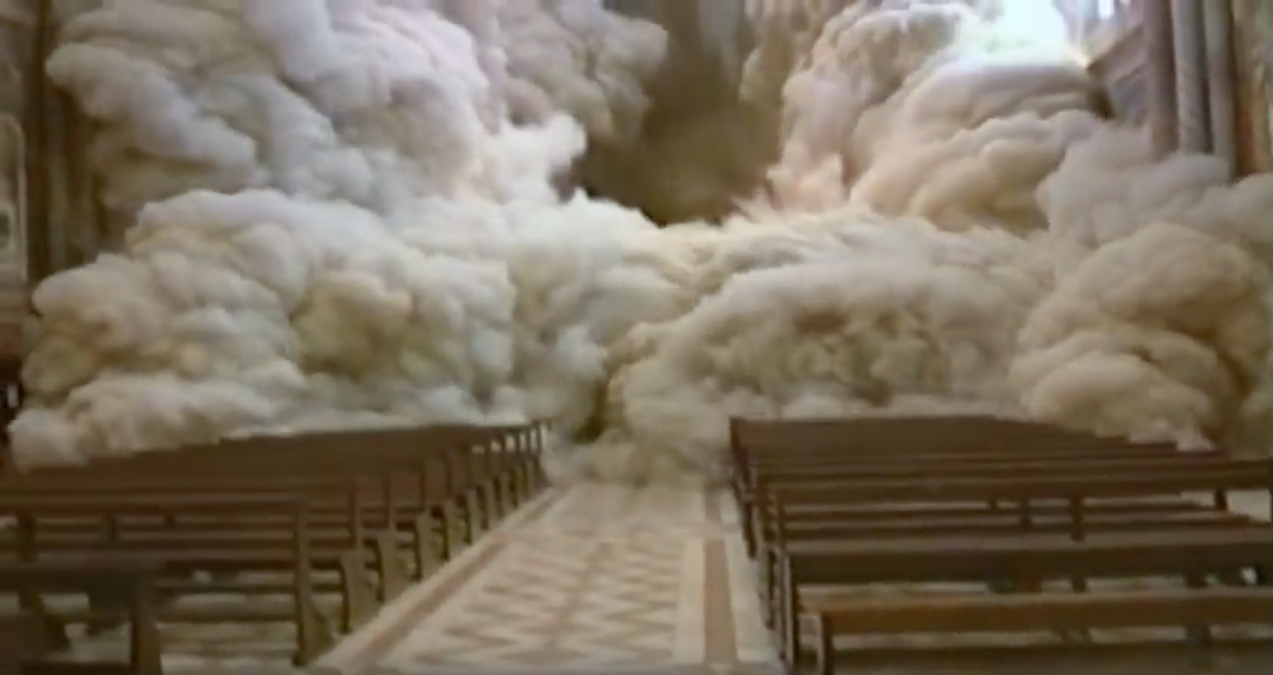 Rock falls produce similar large clouds from small falls. Here's a rock fall at Yosemite, with identical clouds of dust - much bigger than the falling rocks. 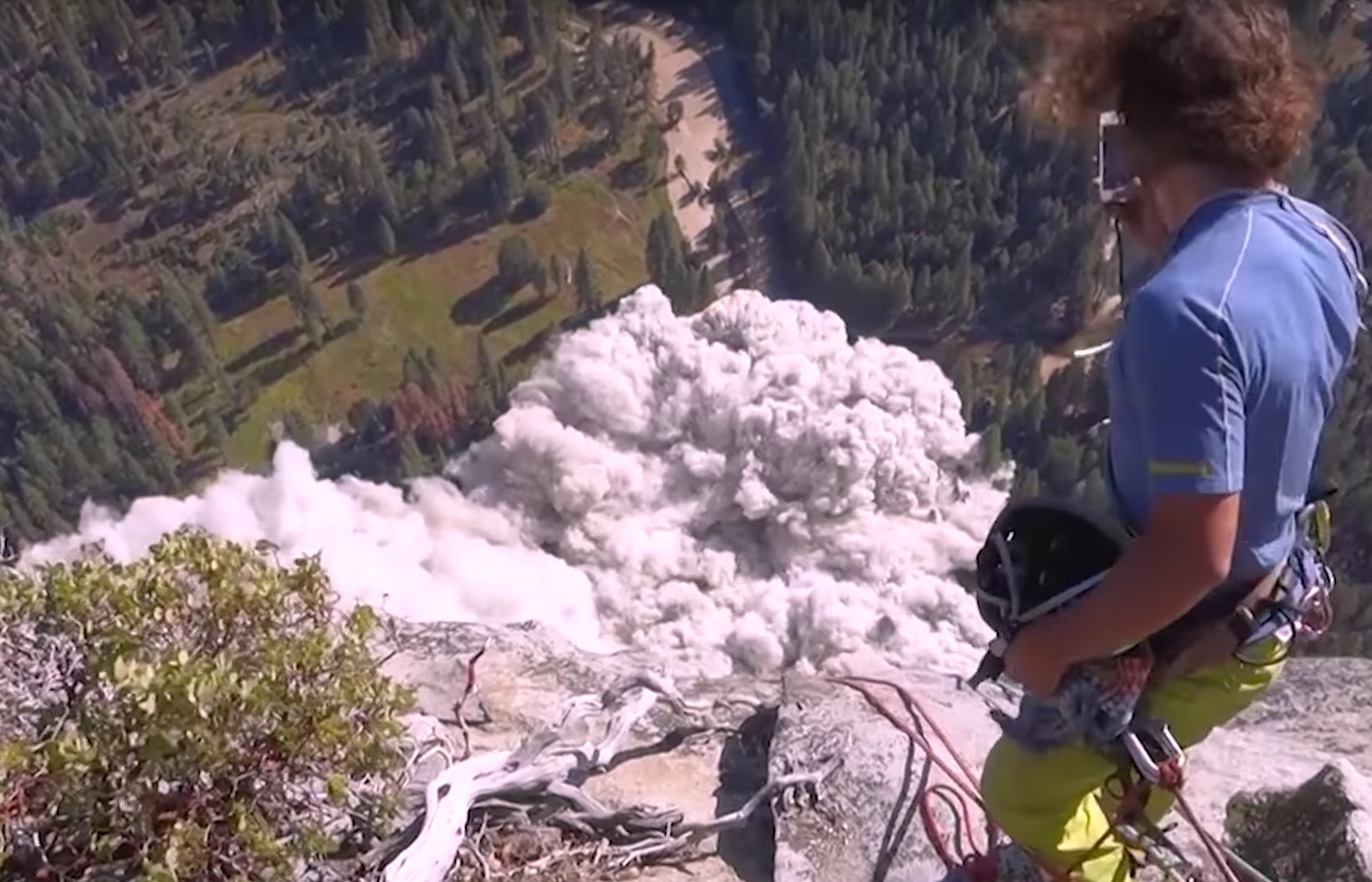 Here's a small structure falling over in an Earthquake: 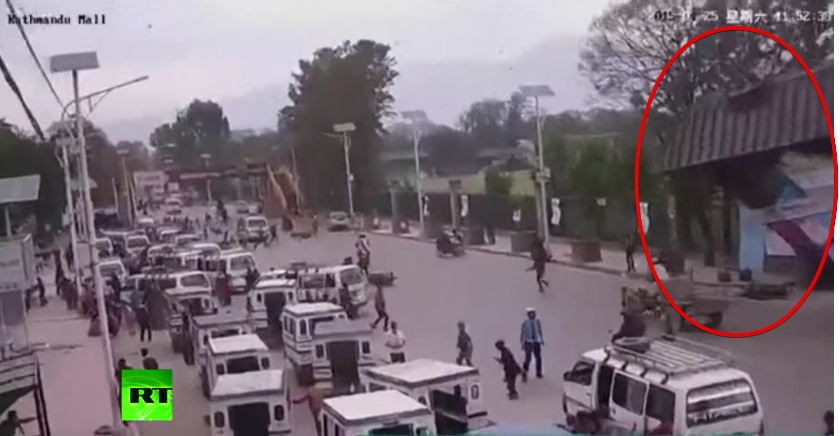 And the resultant cloud of dust that raced across the road at high speed, many times larger than the structure that collapsed. 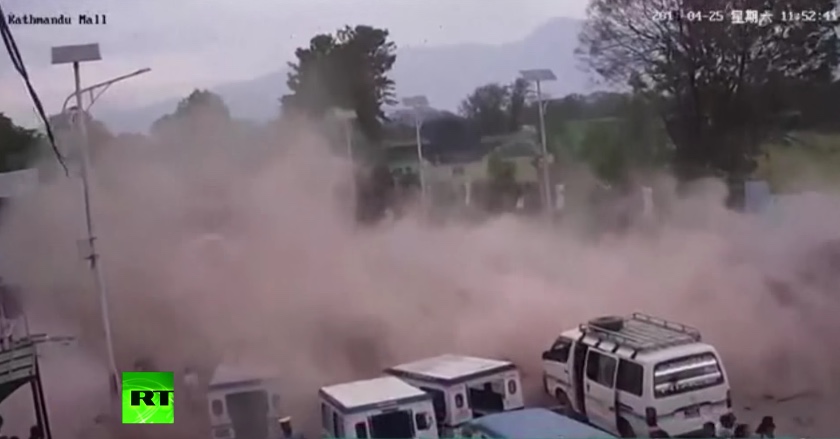 And of course building collapses also create these huge clouds without red-hot air expansion. Here's a recent accidental building collapse in Miami, where no explosives were used:
Source: https://www.youtube.com/watch?v=f4Ty0OzSNz8


And here's one that used explosives, but the movement of the dust quite clearly comes from the wind created by the falling building.
Source: https://youtu.be/fRGEPVTrIMQ?t=44s


So what's actually going on with these growing clouds of dust? You have to think of it in terms of fluid mechanics, and you have to think of it in three dimension. The air is a fluid. When the building collapses it pushes down all the air inside the building, and a good amount outside the building. That is not the only air involved though. When that air is pushed down, air above and to the sides of the building rushes in to take its place. This air also gets dragged down. When the air hits the ground it spreads out in all directions.

The first wave of air continues to move under it's momentum, but it's also being pushed by the air that got sucked down, and is also spreading out, kind of like a microburst:

The flour starts out in a very small compact collection of air and flour as it leaves the cup:

It very quickly "expands" to ten times it's original size, and yet still has a well defined leading edge

Still has some cauliflower shape to it, and now it's around 50x its original size.

So obviously I'm not heating up the air in the cup. It's just moving.

Expanding a gas that way only requires heating if it's the heat that drives the expansion. The same requirements don't apply to dust driven by kinetic energy.
K

Any calculations for what energy was required to turn all that concrete into dust?

Karl Eriksen said:
Any calculations for what energy was required to turn all that concrete into dust?
Click to expand...

Compare it again with the rock fall.

Similar cloud, and yet all the rock did not turn to dust. Same thing with the church.

In the WTC not all of the concrete turned to dust either. Lots of dust was generated both during the collapse and when the concrete hit the ground. But the amount seems perfectly consistent with other collapses, so does not indicate anything different.
Last edited: Dec 22, 2019


This video of smoke stacks being toppled is useful context, as when they hit the ground there's no question of any explosives being involved in the dust cloud. The only smoke and force from the explosives is in a small area around the bottom of each chimney. 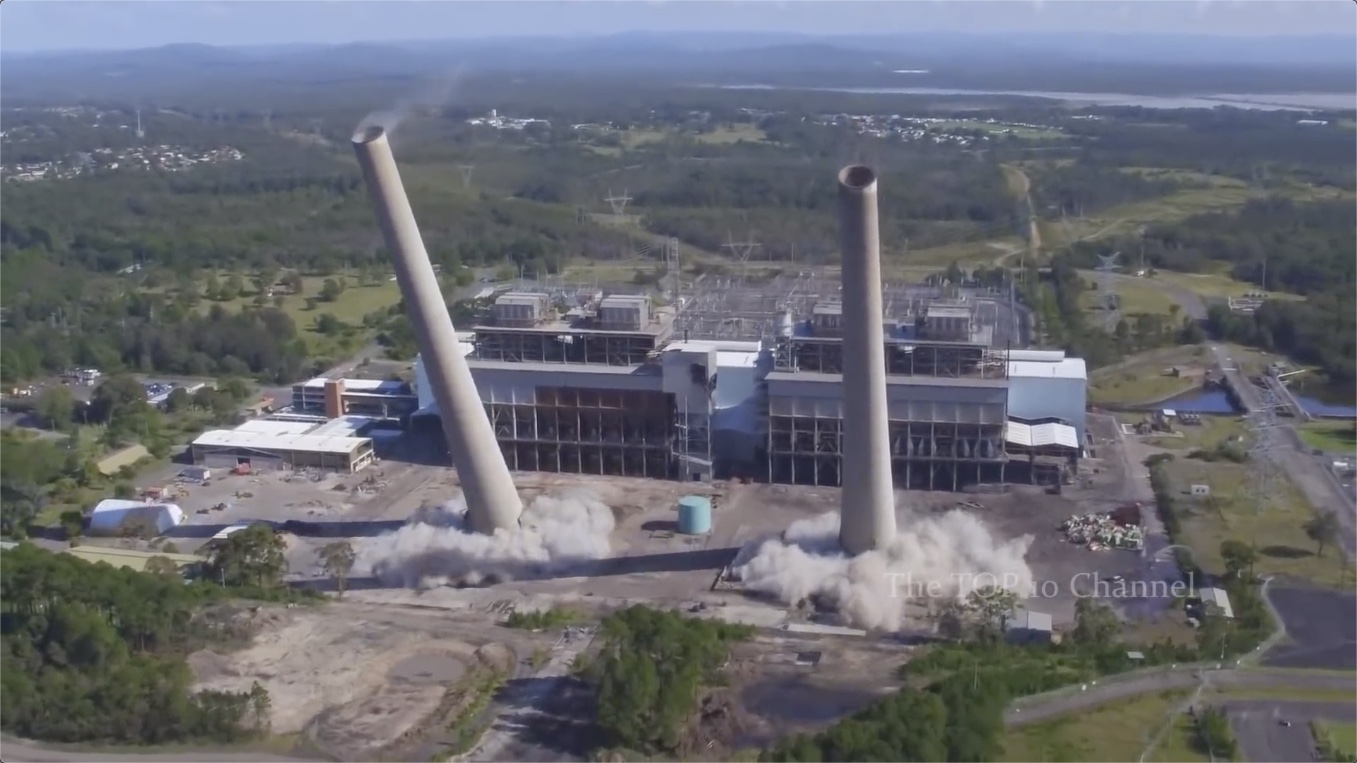 Then it hits the ground: 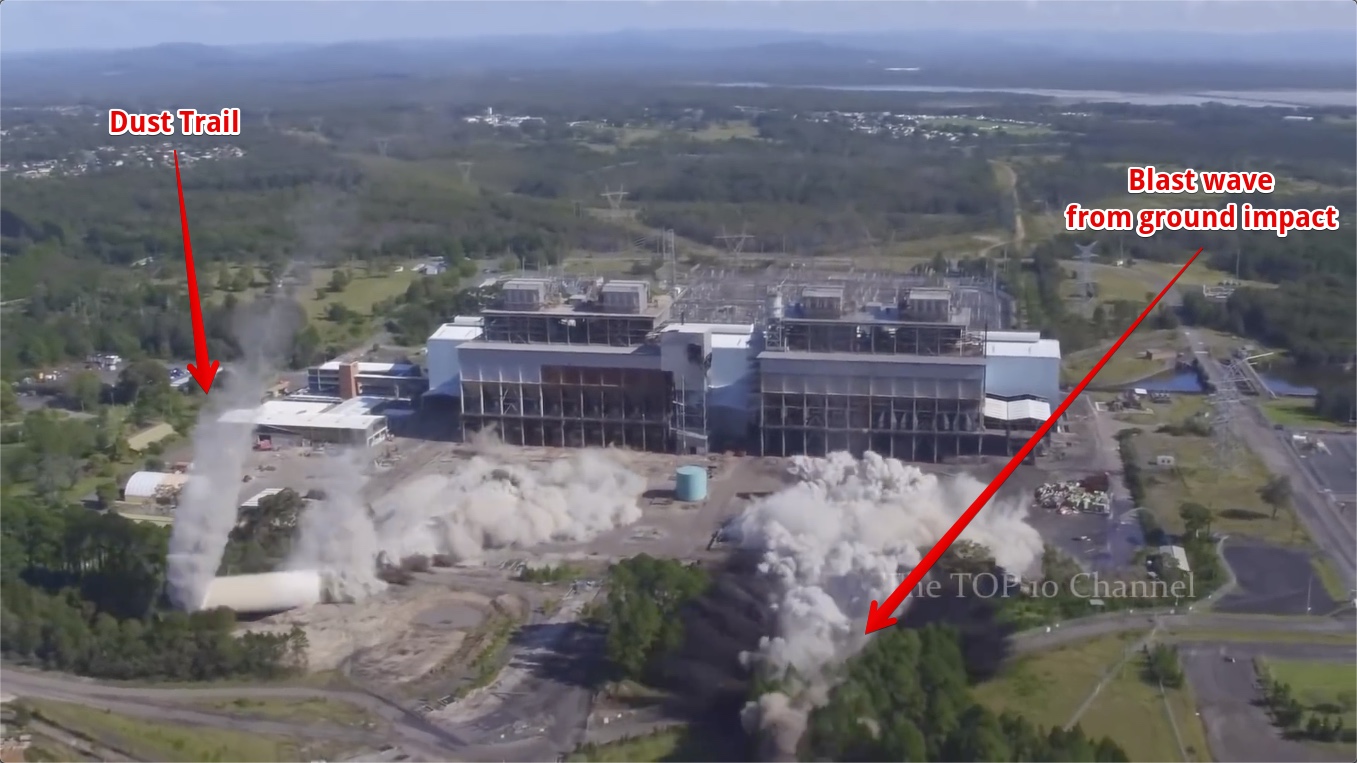 And "pyroclastic-like" dust clouds result, nothing to do with the explosives. 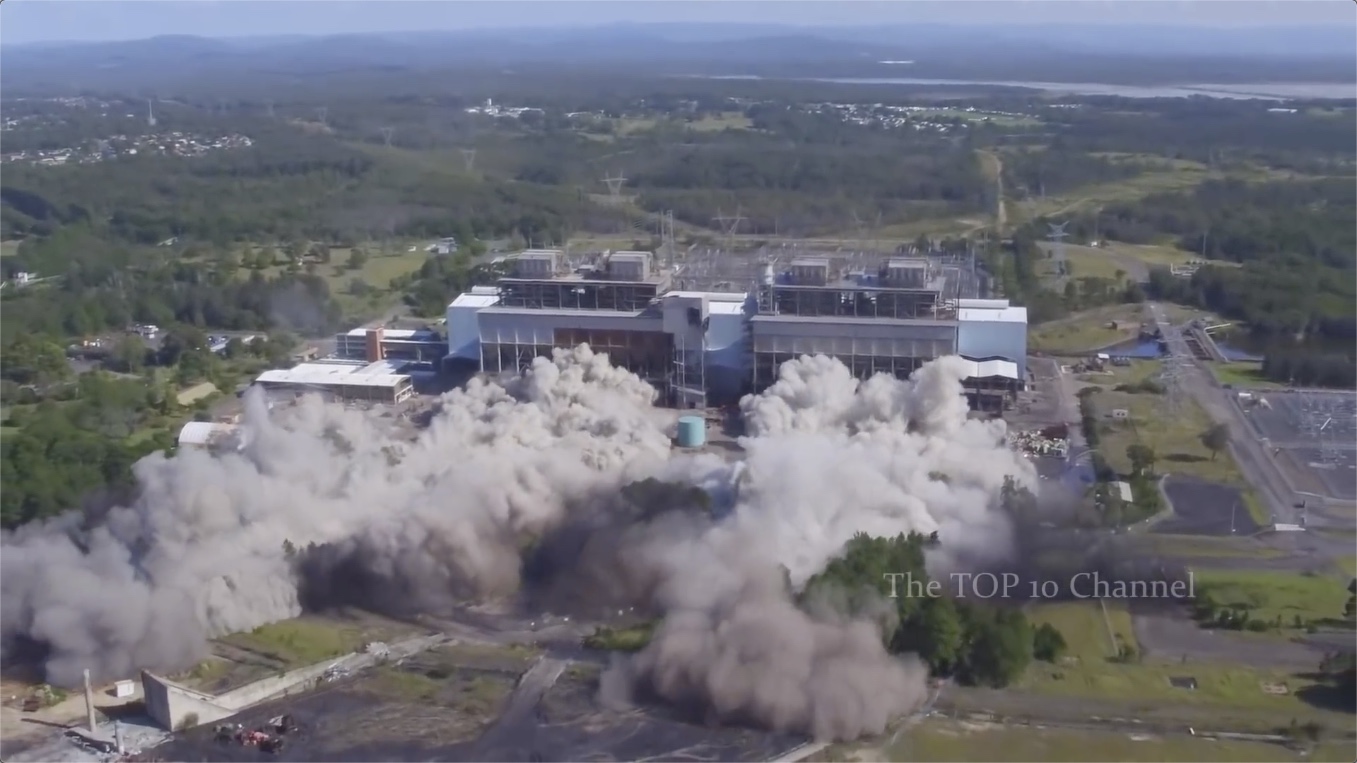 TF2014 said:
There is one reason why I will easily consider the claims of pyroclastic flows as dubious: pyroclastic flows, as far as I know, originate from volcanoes only.
Click to expand...

I see. If that is the case, all that is needed, is to look at the footage taken after these clouds are formed. Since no one is scorched by those clouds....

But pyroclastic flows are mainly powered by gravity, not heat:

A pyroclastic flow is a type of gravity current; in scientific literature they are sometimes abbreviated to PDC (pyroclastic density current).

In fluid dynamics, a gravity current is a primarily horizontal flow in a gravitational field that is driven by a density difference, hence gravity currents also sometimes being referred to as "density currents".

A volcynic eruption ejects rock and dust into the atmosphere rather suddenly and at elevation, thus setting the condions for a pyroclastic flow to occur: air mixed with solid material is heavier than surrounding air, thus sinks to the ground, then spreads outwards (is surface is near to flat) or down the slopes. Incidentally, such flows are devilishly hot, but once a dust cloud has formed, it doesn't matter very much whether it's hot or cold.

A tall building collapsing at elevation similarly ejects dust into the surrounding air, this creating a fluid heavier than air - conditions for a gravity current are set, no explosives and no heat needed.

Look for videos of large rock and landslides for references of non-explosive density flows originating from cold geological processes.

Staff member
The recent collapse of a Hard Rock Hotel in New Orleans provided yet another example:
Source: https://www.youtube.com/watch?v=FbO2z5GA4r0


It also included some examples of falling objects trailing dust. Like the toppling structure on the left here. 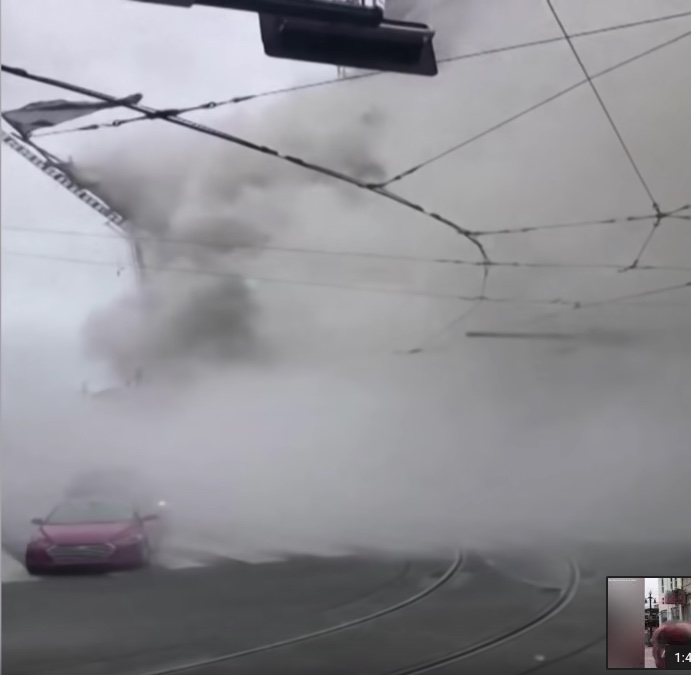 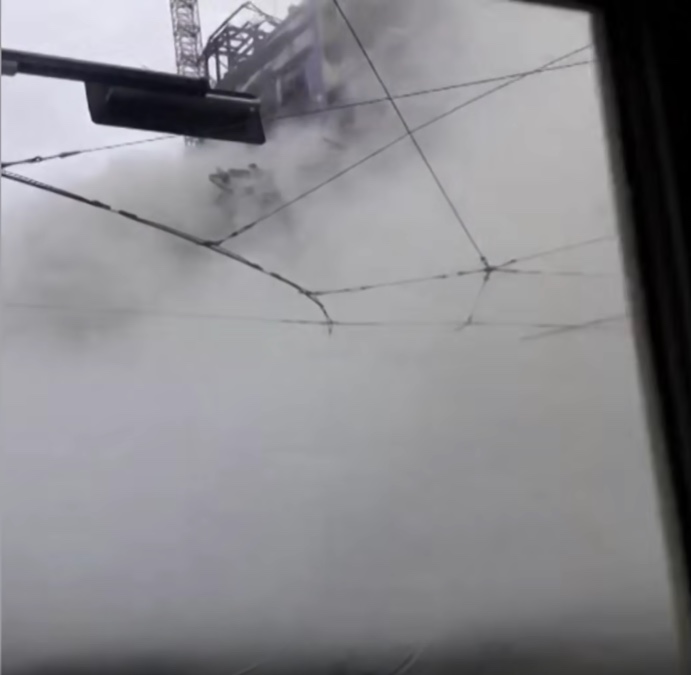 Video from the other side shows the progressive collapse.
Source: https://www.youtube.com/watch?v=C5_UtZWK1aw 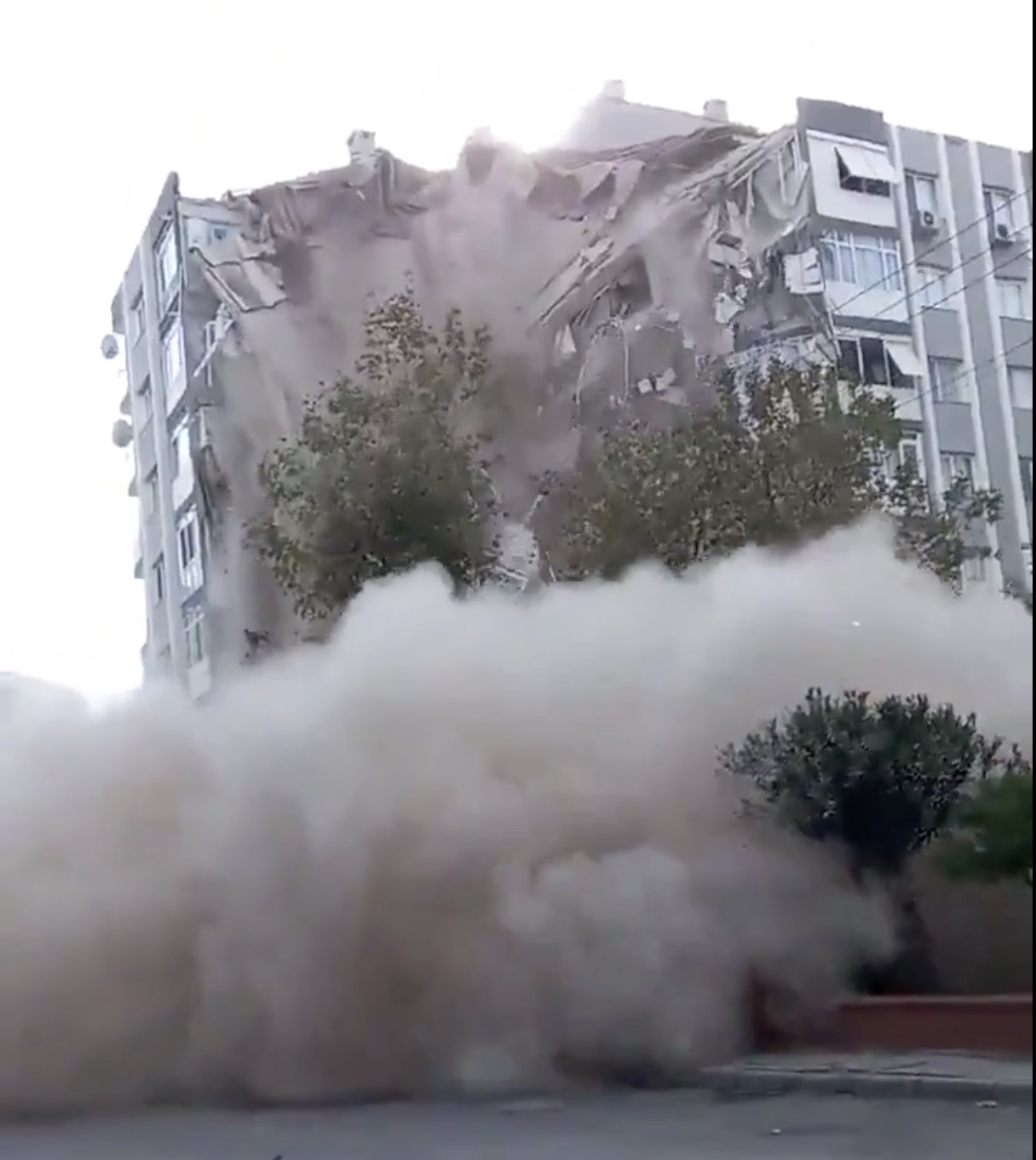