Debunked: 8,000 dead from "chemtrails" in Birmingham, UK (Look Up Documentary)

In the "Look Up" chemtrails propaganda movie, William Thomas makes a claim that during the winter of 1999-2000, 8,000 people in Birmingham, England died from chemtrails, and that refrigerated trucks had to be used as temporary mortuaries. I looked into that claim again, as I did back when he actually made it..


(@12 minutes 14 seconds) "In Birmingham, England, 8,000 people died in three weeks, mostly elderly, it was in ALL the papers, BBC, they were using meat packing trucks as portable morgues, it was very drastic."
Click to expand...

1999 was a bad year for flu and pneumonia in the UK, and 8000 deaths is a regrettably large number, but I could find no references to any such number as Thomas is claiming, and was not able to do so when he made it. It sounds rather an outlandish thing to claim, Birmingham, England had a population of 977,087. The mortality rate claimed by Thomas would be 825 per 100,000.

This article, by Canadian journalistWilliam Thomas, titled Contrails’: Poison From The Sky, (and since renamed Chemtrails’: Poison From The Sky on the Nexuswebsite), mentioned that in areas where these trails had been seen lingering, an emergency room had become ‘inundated with flu-like cases,’ and doctors and nurses were complaining of ‘being extremely busy with respiratory diagnoses.’ Thomas further wrote: ‘In England, after lingering contrails and cobweb-like fallout were reported over London and Birmingham, the BBC reported on January 14, 1999 that more than 8,000 people – mostly elderly-died from pneumonia and other respiratory complications in the last week of December and the first two weeks of January 1999.’
https://chemtrailsnorthnz.wordpress...hemtrail-was-linked-to-outbreak-of-illnesses/
Click to expand...

There was some truth to the fact that a refrigerated truck was used at two UK hospitals, because they had only fifty spaces in their morgue and burials had been delayed during the holidays.

As the Emergency Bed Service issued a warning that hospitals may run out of beds, it emerged on Wednesday that a second Norfolk hospital is using a refrigerated lorry trailer to act as a standby mortuary. Managers at the James Paget Hospital in Gorleston, near Great Yarmouth, brought in the unit, similar to one in use at the Norfolk and Norwich Hospital, after their 50-space morgue began to run out of space. "The unit has been brought in as a contingency," said a spokeswoman."We are not using it at this stage, but the next few days will prove crucial - if we can get through that then hopefully it will be all right." The grim prospect of an overflow morgue arose because of a combination of the Christmas holiday shutdown in the funeral industry and a rise of up to 50% in flu-like illnesses and cases of pneumonia, the hospital said.
http://news.bbc.co.uk/2/hi/uk/250225.stm
Click to expand...

A hospital spokesman said emergency admissions were up 50% on last year, and fewer burials and cremations over Christmas and the New Year had created a body jam. Although it is not the worst flu outbreak the area has seen, it is the highest death rate, a local coroner said. The flu outbreak has hit health services hard across the country, with staff illnesses contributing to the strain. The Midlands and North West of England have so far been worst hit, but hospitals in the South are beginning to feel the pressure
http://news.bbc.co.uk/2/hi/health/249038.stm
Click to expand...

However, looking at overall statistics for flu-related mortality, we see that there is no correlation at all with the rise in "spraying" reports, and that average mortality for the UK during that season was around 250 per 100,000 population, one third of the rate now being cited by Thomas for Birmingham:

Life expectancy in Birmingham itself since the period 1998-2000 seems to have been normal and is increasing, despite many reports of contrails: 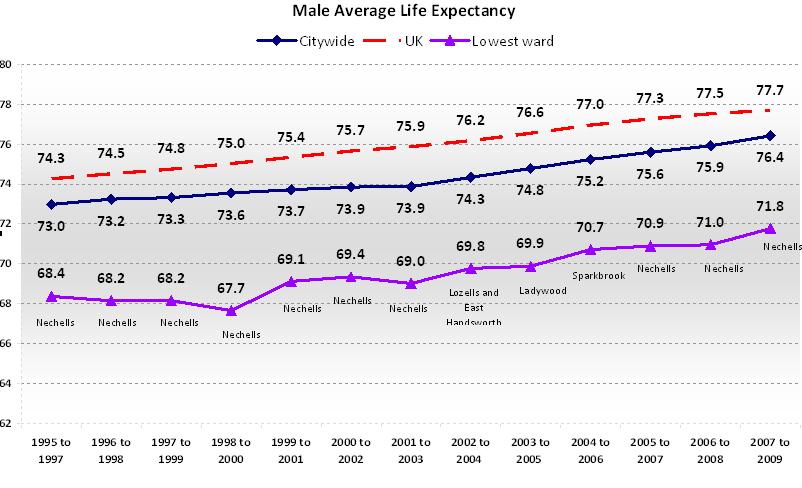 Conclusion:
It looks like Thomas 'misspoke' or purposely exaggerated his original claim.

George Barnes simply took Thomas' claim as being true, and either never checked it out, or did so and left it in because it suited his purpose of instilling fear into people. You should be ashamed, Barnes, and issue a retraction. This is exactly the sort of thing this hoax has been built on, much of what you believe is similarly defective, and you are part of the continuing problem.
Last edited: Nov 27, 2013

The most detailed information I have found on this subject is from Dr. D. M. Fleming of the Birmingham Research Unit of the Royal College of General Practitioners.

Lessons from 40 years' surveillance of influenza in England and Wales
http://www.ncbi.nlm.nih.gov/pmc/articles/PMC2870877/
Excerpts:


The pandemic of 1968/69 (Hong Kong influenza due to an influenza A H3N2 virus) had maximum impact in the United Kingdom in midwinter 1969/70. In the first week of 1970 the incidence of ILI was reported in the WRS at 1252/100 000, a rate which has not been equalled since. Throughout the 1970s there were substantial influenza epidemics in most winters but subsequent epidemics, although seen in most winters, have been much less severe [19]. Doctors entering general practice after 1990 have not experienced a serious influenza epidemic.
In the decade following the 1969/70 UK pandemic, there were several winters in which high levels of incidence were reported. The introduction of the next pandemic virus is also likely to be followed by several years of increased influenza activity and increased demands for vaccination and prophylactic treatment. The gradual decline in the magnitude of epidemics is not explained, but could perhaps reflect a diminishing capacity of the present H3 viruses to drift to any further substantial degree. The major part of this decline occurred well before the policy of routine influenza vaccination of the elderly was established.

In the typical winter epidemics of recent years influenza-attributable deaths in England and Wales (all causes, all age groups) have been estimated to average 12 000 annually [31], a rate-based estimate comparable to that in a recent major American study [32]. Some deaths in children occur in every epidemic but are greater when a novel virus or major drifted variant is seen [33, 34].
Click to expand...

I think I've heard this strawman from Wigington before, and it always bothers me that he doesn't understand the argument he is trying to speak against.
Last edited: Nov 28, 2013

I think I've heard this strawman from Wigington before, and it always bothers me that he doesn't understand the argument he is trying to speak against.
Click to expand...

Coal burning releases aluminium compounds into the atmosphere along with other "heavy" metals even though a great deal does get left in the ash, but even then poor storage leads to atmospheric release. Oil fired stations can release Al as well as Biomass generators.

Wigington actually says that aluminum cannot come from China, and cites California Air Resources Board (CARB) as saying so, he concludes therefore the source of Al he finds in rain must necessarily be put up into the air by an airplane. Well, he is wrong on all three claims.
He says:

In California for example, State Water Quality stopped testing for aluminum in 02′. CARB (California Air Resources Board) also does not even look for such contaminants. This author personally attended a high level CARB closed door meeting in Sacramento California which was arranged by a congressional representative. There were 5 high level CARB officials in attendance. I was told to my face that they are mandated to test for “combustion particulates only”. The rest of the air samples apparently go out the window. Certainly it would be hard to find what you are told not to look for.
http://educate-yourself.org/ct/howtostopthespracying01dec12.shtml1
Click to expand...

1. CARB itself has published testing specifically looking for Chinese mineral dust, and of course since Al is the third most common crustal element, they found it. This 2003 paper at the CARB website: Asian aerosols in North America: Extracting the chemical composition and mass concentration of the Asian continental aerosol plume from long-term aerosol records in the western United States
http://www.arb.ca.gov/research/ict/docs/asian-aerosols03.pdf

2. His local soil contains enough aluminum to explain all his test results, and further testing by Steve Funk for the presence of aluminosilicate and oxides showed a contamination of dust in both wet and dry deposition right there in the Mt. Shasta area. It does not require an airplane, ust a wind blowing dust around.
https://www.metabunk.org/threads/debunked-shasta-snow-and-water-aluminum-tests.137/

Wigington has been made aware of these errors yet he still continues to repeat the false statements rather than even acknowledge them.
You must log in or register to reply here.