Staff member
The dead birds that cropped up in Beebe were unusual. But the only unusual thing about them was the sheer number and the proximity to people. While birds dropping dead is nothing new, having 5,000 drop dead, and having it happen over a town, is pretty rare.

Most of the US is uninhabited, so normally when these things happen, nobody notices, except maybe a farmer. The bird carcasses are quickly consumed. It's like it never happened, regardless of how large the flock of birds happened to be. This time of course, a very large flock of blackbirds met an unexpected end, and it just happened to be right over town, so lots of people were disturbed, making an interesting story for the media.

As with any such story, once it goes big, the media gets a taste for it and becomes hyper-sensitive, and will willingly report on any related topic, no matter how small, even up to the national level.

Thus the "dead birds" stories begin to show up:


[h=2]Dozens of dead birds found on Swedish street[/h]
Macleans.ca (blog) - ‎20 minutes ago‎
Between 50 and 100 black jackdaw birds were found dead by police in the snowy residential streets of Falkoeping, Sweden this week, mirroring the New ...

The problem here is that if the Beebe incident had not happened, then these other stories would barely have made the news. But suddenly every single little bird death is mentioned like it's part of a pattern. This repetition is self-reinforcing, and makes the press and the public even more hyper-aware of dead birds, and it gets to a stage where saying "it's normal" has no effect.

To some degree those writing the stories are aware of this, so you get odd contrast within the story, like:
http://www.huffingtonpost.com/2011/01/05/dead-birds-sweden_n_804600.html

STOCKHOLM — Officials say about 50 birds have been found dead on a street in Sweden.
...
Mass bird deaths aren't uncommon.
Click to expand...

News! Something happened that is not uncommon. 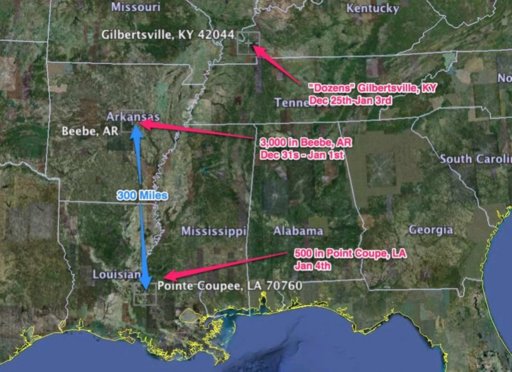 The only commonality between the two locations (and the KY incident is not worth much discussion, as it's almost certainly an overreaction to normal dead birds) is the weather. It's been pretty cold down in LA, dropping to below freezing overnight on Jan 3rd. The cold conditions were also repeated in Beebe, where it was below freezing on the night of Dec 31st.

So, we've got two mass blackbird deaths, and the media is acting like it's the end of the world, every time someone finds a few dead birds in their back yard then the local media is going to send round a news crew. But really - is it that unusual?

[USGS spokesman Paul Slota] declined to speculate on a cause for the deaths, but he said a search of USGS records shows there have been 16 events in the past 30 years involving blackbirds where at least 1,000 of the birds have died seemingly all at once.


“These large events do take place,” he said. “It’s not terribly unusual.”
Click to expand...

THAT is what the mass media is failing to report, and what the conspiracy theorists seem entirely blind to. That's what any debunker discussing the story needs to point out. It's not terribly unusual. It happens every couple of years. It has always happened. It's not some environmental catastrophe. It's not a secret weapons test gone awry. It's not chemtrails. It's just nature.

The USGS National Wildlife Health Center tracks events like these. You can see similar events on their Ongoing Mortality Events page, and the Quarterly Reports. You'll see things like in 1999, 27,000 blackbirds (and other birds) were found dead in a field in a poisoning incident. There's are several cases where hundreds of red-wing blackbirds were found dead with no cause. But if you read through the reports, you'll see there are lots of reasons why birds die.

Some people are going beyond birds and now every single mortality event gets blown out of proportion, like some sign of the apocalypse. It's just things dying, lek they do. Here's the USGS map of current mortality events. These things happen all the time, they just don't make the news, because they are normal. 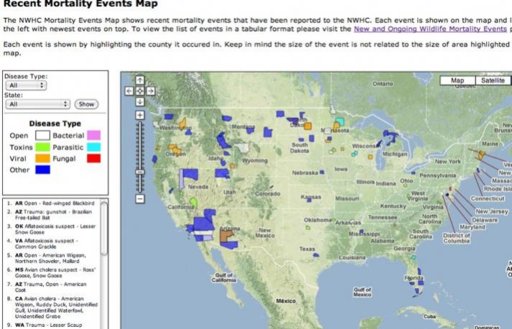 In late summer, after the nesting season, blackbirds form flocks and roost at night in numbers varying from a few to over a million birds. These flocks and roosting congregations are sometimes comprised of a single species, but often all three species mix together. Although some blackbirds roost in trees in the northern Great Plains, the birds prefer to roost in dense cattail marshes. Between 40 and 50 percent of the blackbird population dies every year. But these mortality figures are offset by the birds' reproductive success.
Click to expand...

Key facts: You can have over a million birds in a single flock, and nearly half the birds die every year. From a single flock of a million, that's 1369 deaths a day, and probably most of those are in winter. Some of these deaths are going to occur in clusters, due to weather events and flock sizes and health.

I found this little gem - it's too wierd for me - apparently FEMA is to blame??

Sad to say that even the usually sane Guardian in the UK has run with this story with the headline of "Apocalypse now? Mystery bird deaths hit Louisiana", which was disappointing. It was especially disappointing as they included the sane bits of the story:

"Bird experts stressed no one should be worried. "Mass bird die-offs can be caused by starvation, storms, disease, pesticide, collision with man-made structures or human disturbance ... Initial findings indicate that these are isolated incidents that were probably caused by disturbance and disorientation," Greg Butcher, director of bird conservation at the Audubon Society, said."
Click to expand...

Reading the comments section beneath the article we find that possible causes include "a test of a death ray weapon", a sign that the world is coming to an end as predicted in the bible, British Petroleum, "a U.S. experiment (military?) gone arwry", and my own favourite - Voldemort. Among many others.

Staff member
I got the following reference sent to me by Paul Slota, the USGS Spokesman on the issue:

Cold weather often kills migrants in their breeding areas, but not the local resident species which can better withstand it at those times. For migrants, cold and snow act to cut off the food supply, and can have a major selective effect on the seasonal timing of migration. Records of in-flight weather-induced mortality, involving up to hundreds or thousands of birds at a time, have affected mainly small passerines, but also larger birds, including eagles and swans. Most occurred in conditions of mist, rain or snow storms, and some involved nocturnal collisions with illuminated masts and other tall structures. Records of post-arrival mortality in breeding areas have involved mainly small insectivores (especially hirundines), but also waders and waterfowl. Such incidents, associated with cold and snow, have reduced local breeding densities from the previous year by 25-90%, depending on species and area, with up to several years required for recovery. Records of pre-departure mortality on breeding areas have mainly affected hirundines. Two major incidents in central Europe in September 1931 and 1974 killed hundreds of thousands, or even millions, of swallows and martins.
Click to expand...

And this article was related:

On the night of 13-14 January 1997,
thousands of grebes migrating southward from
Great Salt Lake flew into a snowstorm and
crashed in southern Utah. Near the town of
Delta about 3650 hit the ground after being
attracted to lights of houses; of these 148
(4.1%) were found dead. Concurrently, 8 km
away, 3600 more were downed and 1600
(44.4%) were found dead in a 2-ha pond at
the Intermountain Power Project plant (IPP).
Internal examination of over 1000 carcasses
showed, as in previous downings (Jehl 1993),
that death resulted from severe trauma (e.g.,
massive internal bleeding; broken bill, ster-num,
clavicles, legs; cranial hemorrhage; rup-
tured spleen or liver)
Click to expand...

A local resident reported hearing about 20 loud booms Saturday night -- which could have been fireworks or a cannon to get rid of nuisance birds -- and saw a huge flock of frantic birds when he went outside.

Blackbirds have poor night vision and they were likely killed because they banged into houses, trees and each other in their fright.
Click to expand...

Blackbirds, one should note, roost around Beebe in huge numbers, flocks of hundreds of thousands. Flocks so big that farmers actually have cannons to try to scare them away.

Staff member
Bird deaths in perspective. Bird deaths simply from them flying into things are in the hundreds of millions.

Building window strikes may account for 97 to 976 million bird deaths each year. Communication towers conservatively kill 4 to 5 million birds annually (possibly closer to 40 to 50 million; a nationwide cumulative impacts study should help resolve this question). Strikes at high tension transmission and distribution power lines very conservatively kill tens of thousands of birds annually. Taking into account the millions of miles of bulk transmission and distribution lines in the U.S., and extrapolating from European studies, actual mortality could be as high as 174 million deaths annually. Electrocutions probably kill tens of thousands of birds but the problem is barely monitored. Cars may kill 60 million birds or more each year, private and commercial aircraft far fewer, while wind turbine rotors kill an estimated 33,000 birds annually.
Click to expand...

Staff member
The Radar images of the flock of birds show it covering 30-40 square miles. That's a lot of birds. Probably over a million. 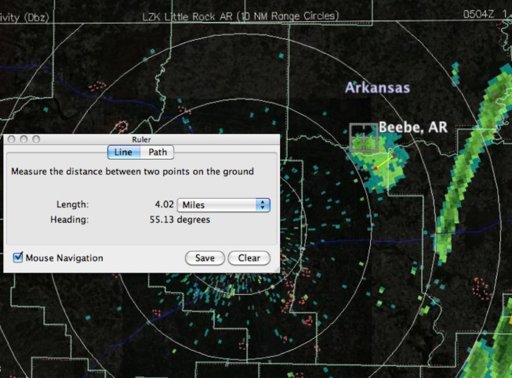 Found this interesting and balanced article:

First, the blackbirds fell out of the sky on New Year's Eve in Arkansas. In recent days, wildlife have mysteriously died in big numbers: 2 million fish in the Chesapeake Bay, 150 tons of red tilapia in Vietnam, 40,000 crabs in Britain and other places across the world. Blogs connected the deadly dots, joking about the "aflockalypse" while others saw real signs of something sinister, either biblical or environmental.

The reality, say biologists, is that these mass die-offs happen all the time and usually are unrelated.

Federal records show they happen on average every other day somewhere in North America. Usually, we don't notice them and don't try to link them to each other.

AND MORE!! all within seven days.

I am logical and intelligent, and i say Bullshit these mass deaths are unrelated.
U

Same as above I meant to respond to this Micktool

Bird deaths in perspective. Bird deaths simply from them flying into things are in the hundreds of millions.

Building window strikes may account for 97 to 976 million bird deaths each year. Communication towers conservatively kill 4 to 5 million birds annually (possibly closer to 40 to 50 million; a nationwide cumulative impacts study should help resolve this question). Strikes at high tension transmission and distribution power lines very conservatively kill tens of thousands of birds annually. Taking into account the millions of miles of bulk transmission and distribution lines in the U.S., and extrapolating from European studies, actual mortality could be as high as 174 million deaths annually. Electrocutions probably kill tens of thousands of birds but the problem is barely monitored. Cars may kill 60 million birds or more each year, private and commercial aircraft far fewer, while wind turbine rotors kill an estimated 33,000 birds annually.
You must log in or register to reply here.