Recently a high school student posted a photo on reddit that was taken by his school's high altitude balloon. This is the original photo: 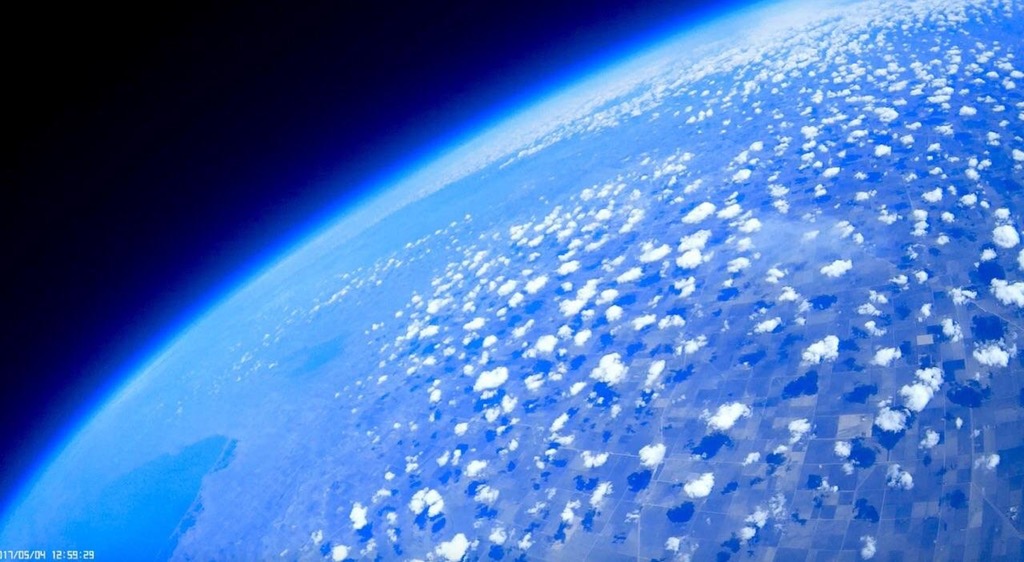 The thread was sadly locked because of flat earth spam comments relating to the fisheye lens that was used. Indeed, going through OPs comments, he confirmed that he used the Mobius Action Camera. He did not specify the lens but from the colors and the FOV it seems pretty obvious that it was the regular Type-A lens (which suffers from considerable barrel distortion). For this specific combination, there a lot of videos on Youtube where people film things at ground level, meaning that it is relatively easy to create a lens correction profile in Adobe Lightoom. After some trail and error I found that the sweet spot (the spot after which concave lines that ought to be straight become convex) in this case was a distortion value between 76 and 79, using the Go Pro HERO profile. Please note that this method of correction can only do so much and is no way scientific. As discussed in other threads already (mainly the one about measuring the curvature of the horizon with a level), barrel distortion does not affect the lens equally at every point in the frame. The best shots are usually the ones where the horizon is leveled, in the (horizontal) center of the frame. The whole process would also be a lot easier if the exact behavior of the lens was known beforehand. 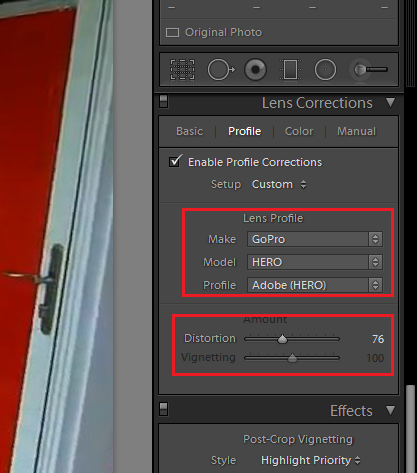 I applied that technique to a few test stills: 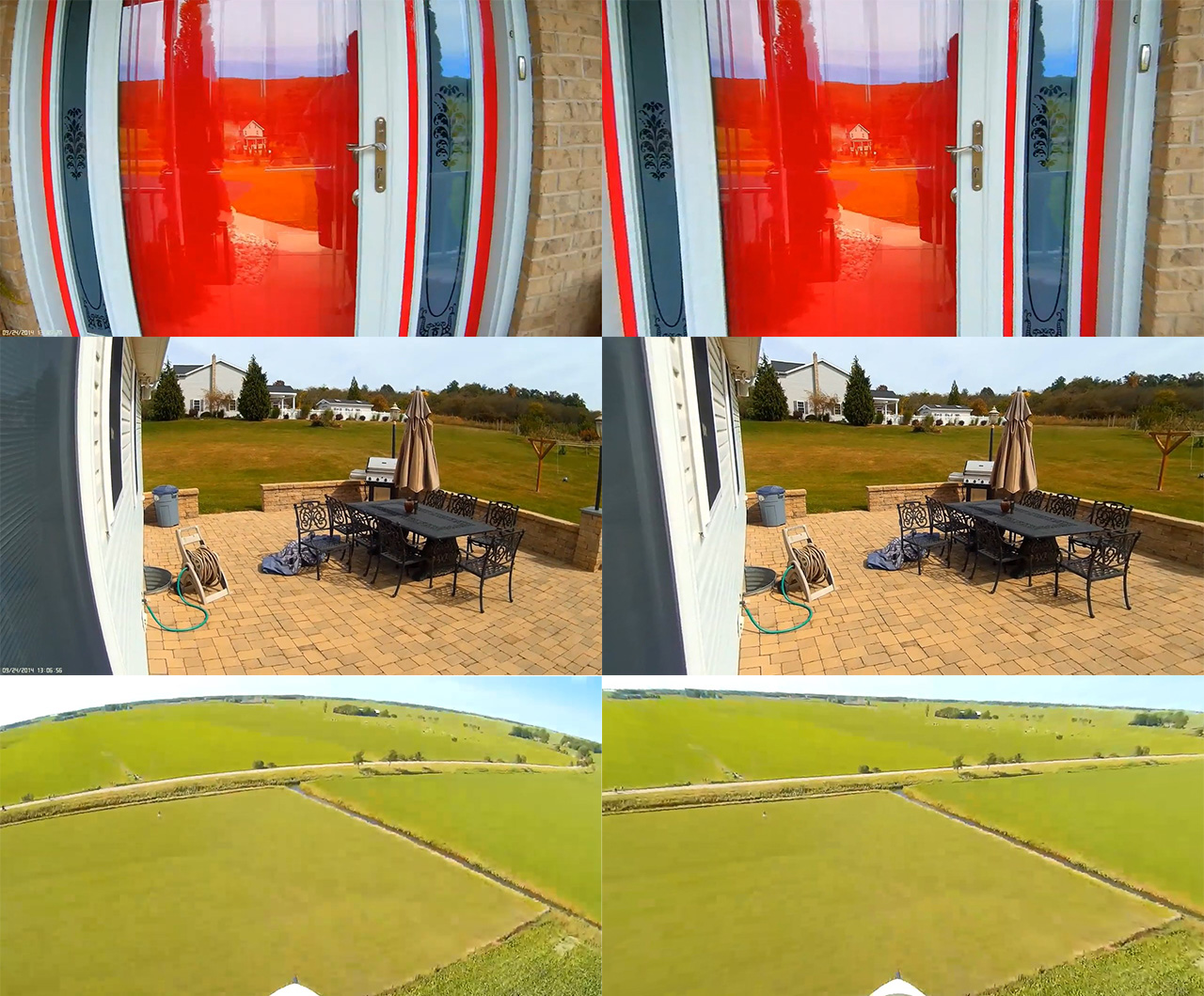 And finally, on the original photo posted by OP: 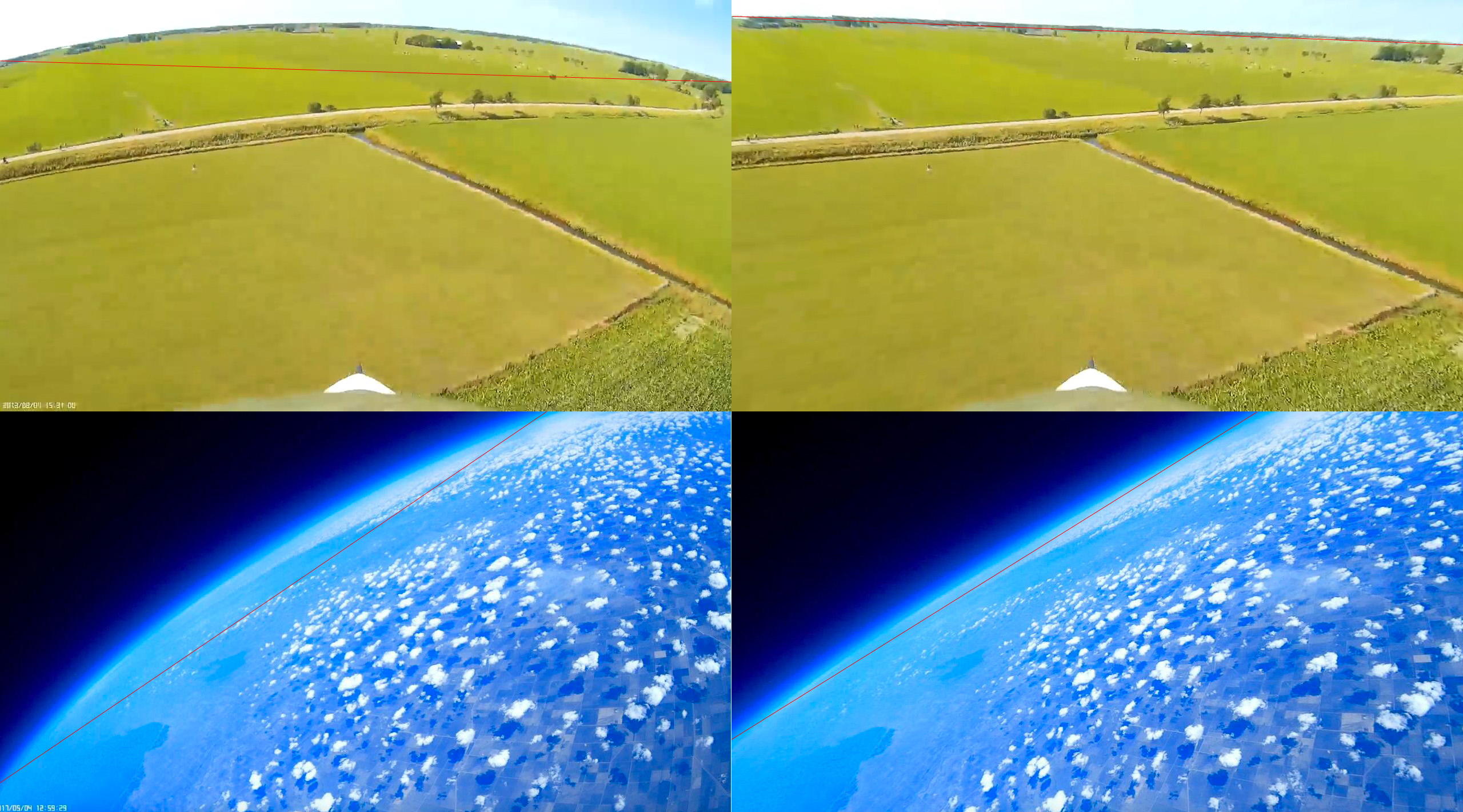 However, I am fairly certain that even with that technique, the majority of the curvature we are seeing in the bottom right picture is due to the camera. According to OP, the balloon flew as high as 35km but the exact altitude this photo was taken is unknown.

Oh, and as a bonus: Here is this technique applied to a currently running ISS live stream. 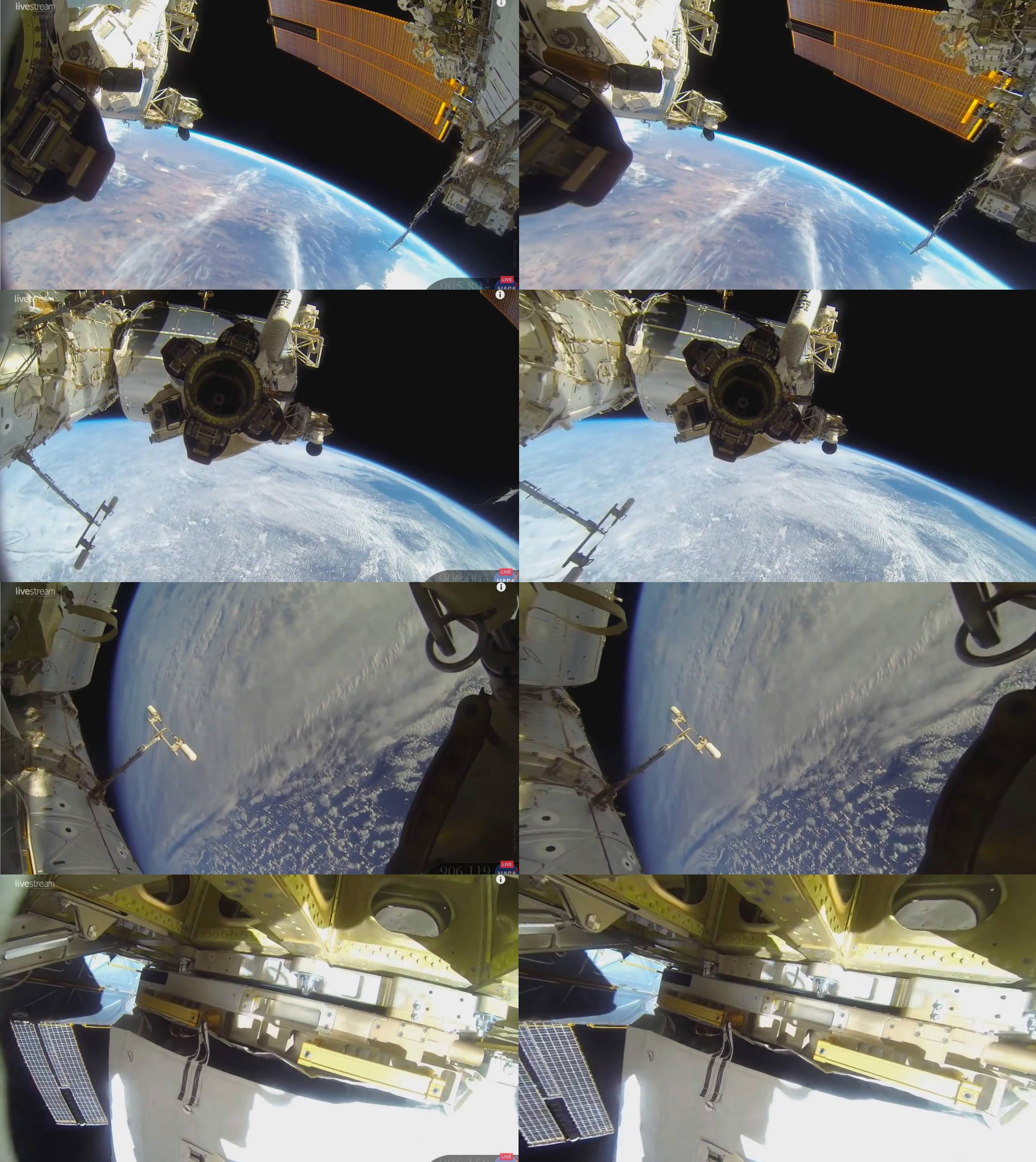 One thing I find interesting with this stream is that I was unable to make earth look perfectly flat without making other objects in the frame look curved. When you don't have any reference images or perfectly applicable lens profile files, it is obviously the best idea to make objects that ought to be rectangular (like the solar panels) look straight and then see what happens.

Now, using the warp tool in Photoshop, it's possible to create even more accurate correction profiles but does it even make sense to create these for cameras or photos we don't know the exact specifications of? I assume most flat earthers don't take kindly to "faking" photos and won't be convinced by this technique (in fact, I can see that many will interpret this as an attempt at deception, rather than simply fixing photos).
Last edited: May 10, 2017

Staff member
"Correcting" a fisheye image is always going to be suspect. It helps, but better to

I agree, however rectilinear wide angle lenses do use optical correction (besides being large and overly expensive). Whether this correction happens in the glass or in post processing (certain action cameras do offer a "corrected" video output where a similar filter is already applied to the file) is irrelevant if the lens has been properly calibrated with a grid. That being said, the optical approach seems less suspect and is certainly less prone to fake accusations.
Last edited: May 10, 2017 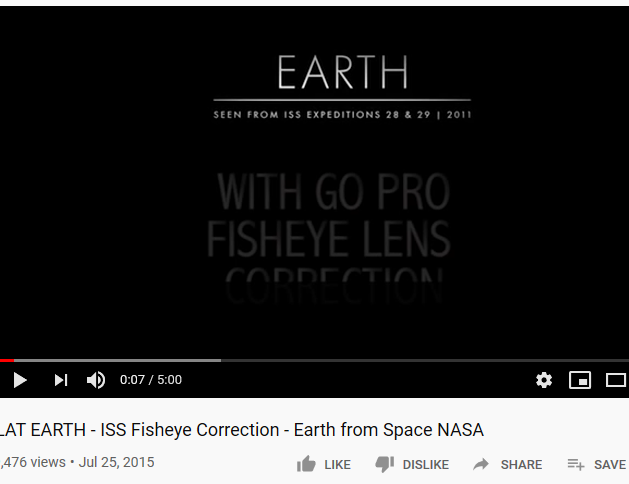 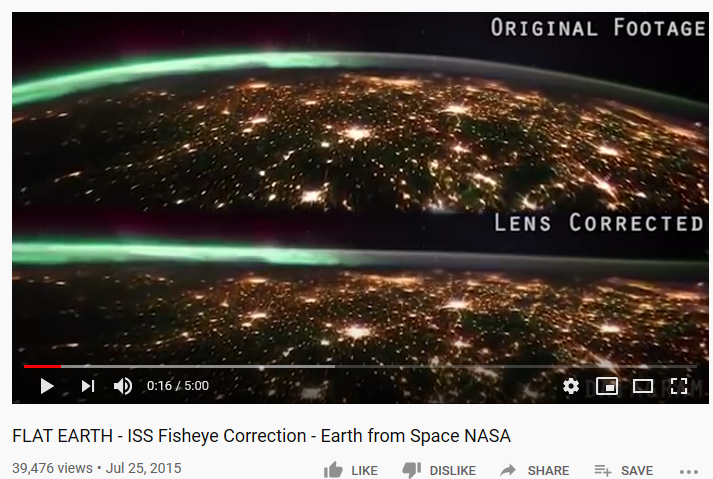 
He shows bunch of ISS videos in upper part of screen,and then he shows "corrected" ones down in screen

Now,I wasnt able to find videos he "corrected".He said they are Go Pro,so we might use videos in upper portion of video.

I just read the description on your video. he says:

The make and model of the lens used to film would be handy too to make this more accurate.

If we can clear up the altitude + lens issue and get an accurate picture, I wonder what answer we will get to our question - stay tuned !

Content from external source
so the uploader doesn't even know what lens was used but he was able to "correct" it? no.

Please do not post more claims unless they provide numbers and methods they used.

Staff member
The make and model of the lens and camera are ESSENTIAL, as results will vary greatly with different lens profiles.

Mick West said:
The make and model of the lens and camera are ESSENTIAL, as results will vary greatly with different lens profiles.
Click to expand...

all (the ones i checked anyway) the clips seem to be available on this page.
https://eol.jsc.nasa.gov/beyondthephotography/crewearthobservationsvideos/Aurora.htm

if you click the "compiled frames" link. then click an individual photo on that page you see the camera make and stuff. 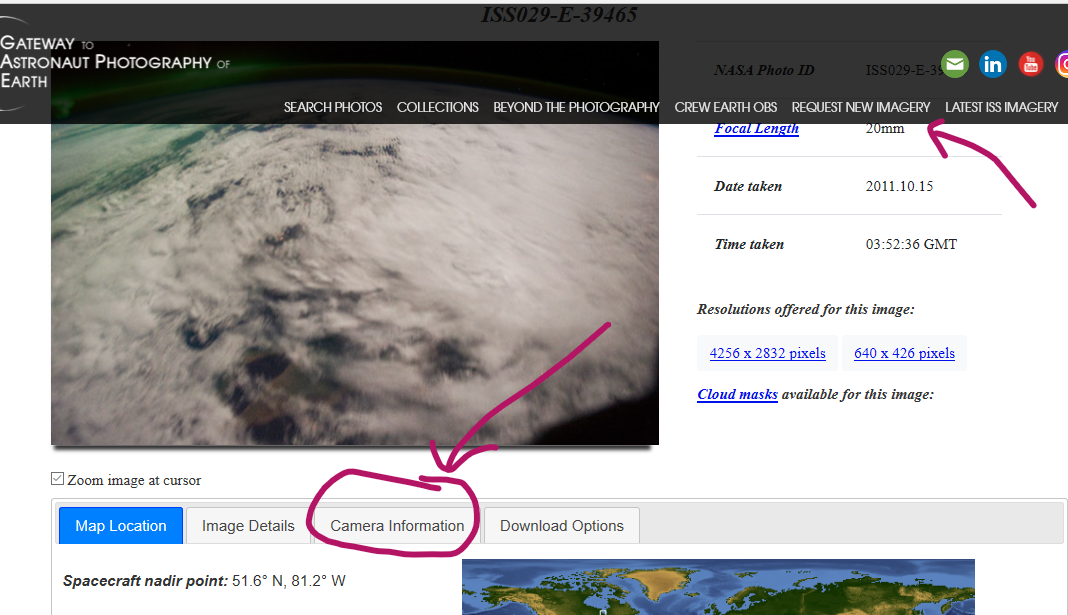 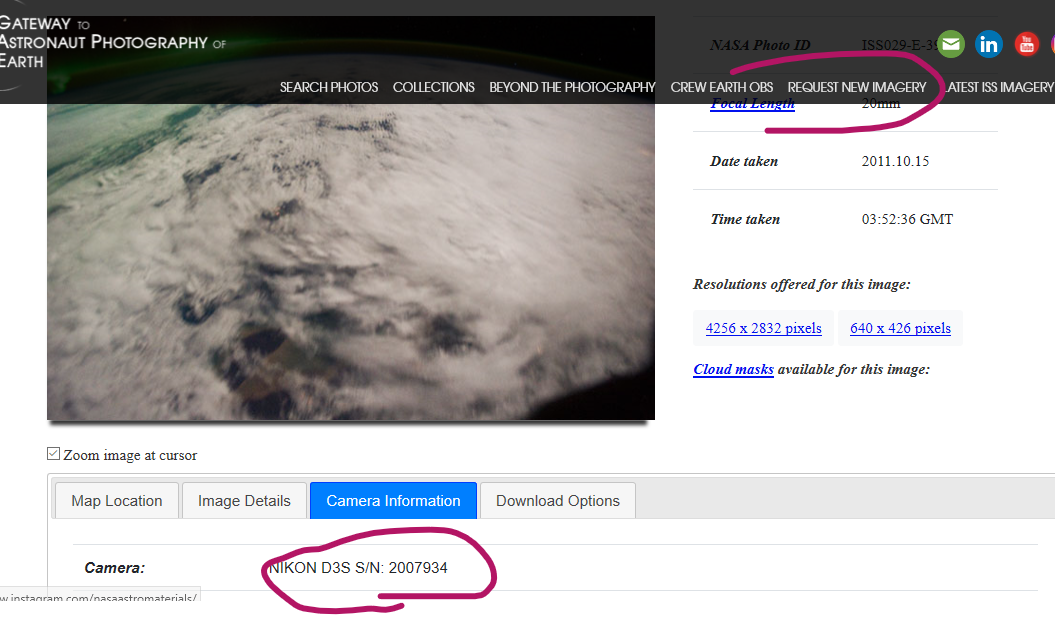 Staff member
If it's compiled from multiple frames then you can't really de-fisheye it. You'd need a virtual lense profile for exactly how the compositing transformed the frames.

Mick West said:
If it's compiled from multiple frames then you can't really de-fisheye it. You'd need a virtual lense profile for exactly how the compositing transformed the frames.

To me, it looks like multiple shots are merged in sequence to form a time-lapse video. Not a composite panorama as you seem to imply. So it is still possible to defish them if they were really taken using a fisheye lens.

However, according to their metadata, most pictures were taken using a 24mm lens, which is not a fisheye lens.

So, they are defishing images that are already rectilinear.

Priyadi said:
To me, it looks like multiple shots are merged in sequence to form a time-lapse video. Not a composite panorama as you seem to imply. So it is still possible to defish them if they were really taken using a fisheye lens.
Click to expand...

Ah yes, I think you are correct.


Priyadi said:
However, according to their metadata, most pictures were taken using a 24mm lens, which is not a fisheye lens.

So, they are defishing images that are already rectilinear.
Click to expand...

Not fisheye does not mean rectilinear - lots of regular lenses have some distortion.

Mick West said:
Not fisheye does not mean rectilinear - lots of regular lenses have some distortion.
Click to expand...

What I meant is that most of the time-lapses were taken using a 24mm lens, a practically normal lens. The 24mm lens has some distortions. To fix that we usually call the process "lens aberration correction", or "distortion correction"; not "defishing", which refers to the process of converting fisheye images taken by fisheye lenses —that are specifically designed to have barrel distortions— to "normal" rectilinear images.

The flat Earther incorrectly assumed the images were taken using a GoPro camera, then proceed to "fix" them by running them through the defishing software, when in fact the images were already practically rectilinear, and no defishing is necessary.
You must log in or register to reply here.