Dark Line in Sky over Vancouver 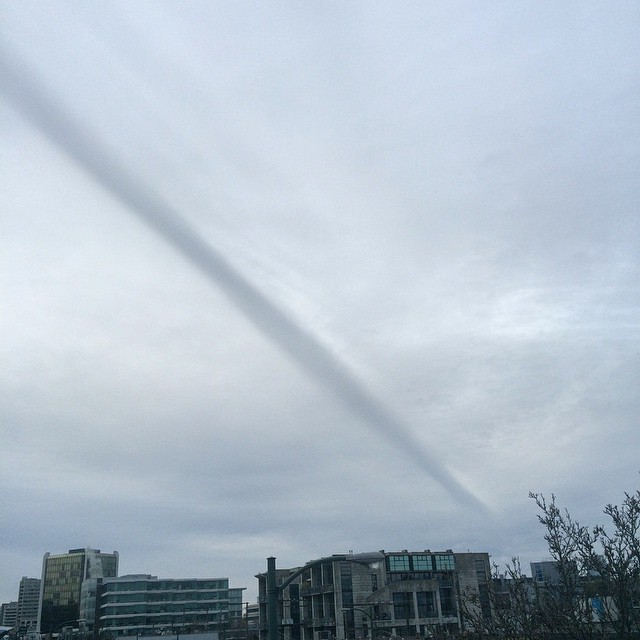 anthonyfloyd 38 minutes ago
Weird feature in the #Vancouver Sky. Doesn't look like a contrail. Any ideas? #yvrwx 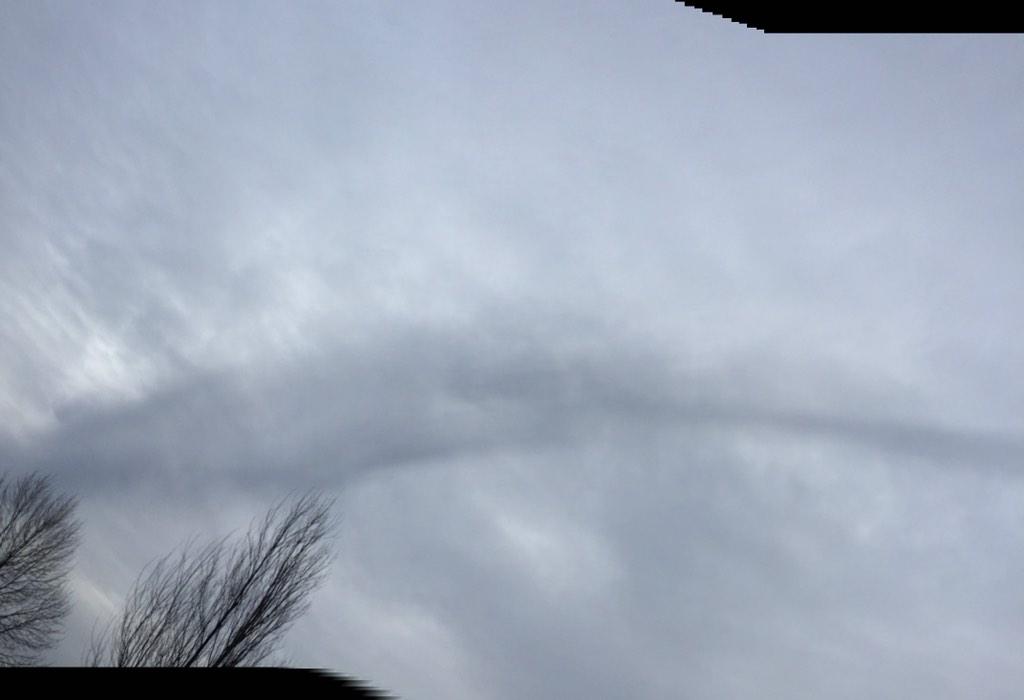 @AnthonyFloyd I was just trying to take pictures of it to what the heck hey?

Why arent you telling us what it is?

so is it a shadow above the lower cloud level? 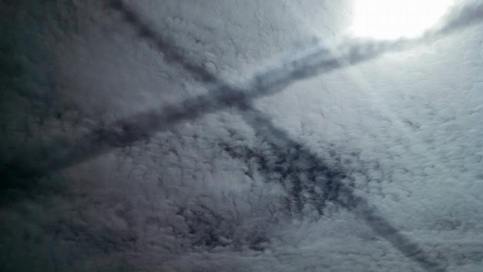 or an odd distrail above the lower cloud level? 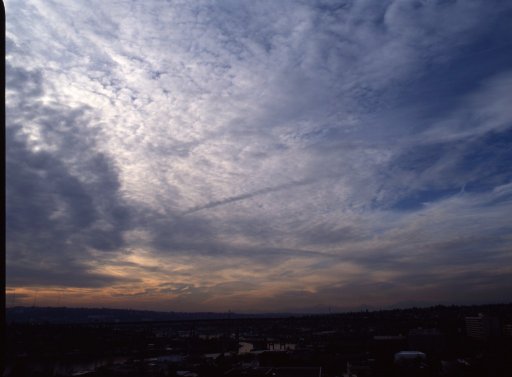 deirdre said:
Why arent you telling us what it is?
Click to expand...

Because I'm not sure. It looks somewhat like a contrails shadow, but then there's also some odd linear features parallel to it, and it looks a bit too irregular to be a contrail. 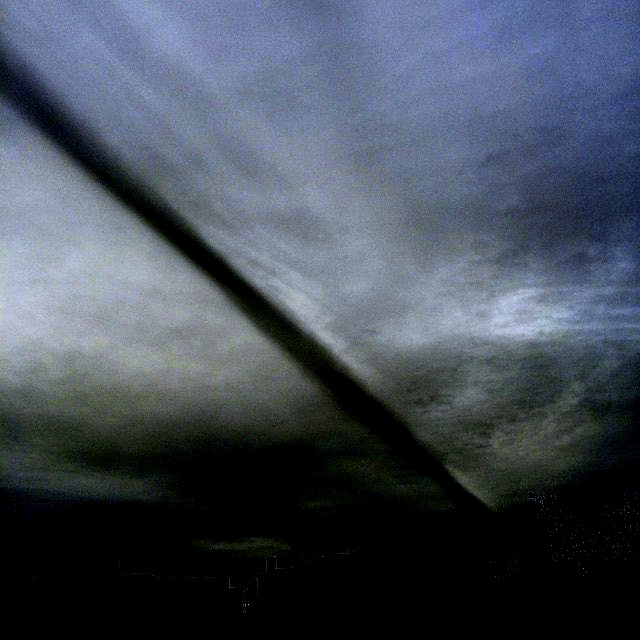 It might be a contrail shadow on/in an irregular layer. Or maybe the shadow of a roll cloud.

The second pic (a panorama, it seems) looks very unlike a contrail shadow. 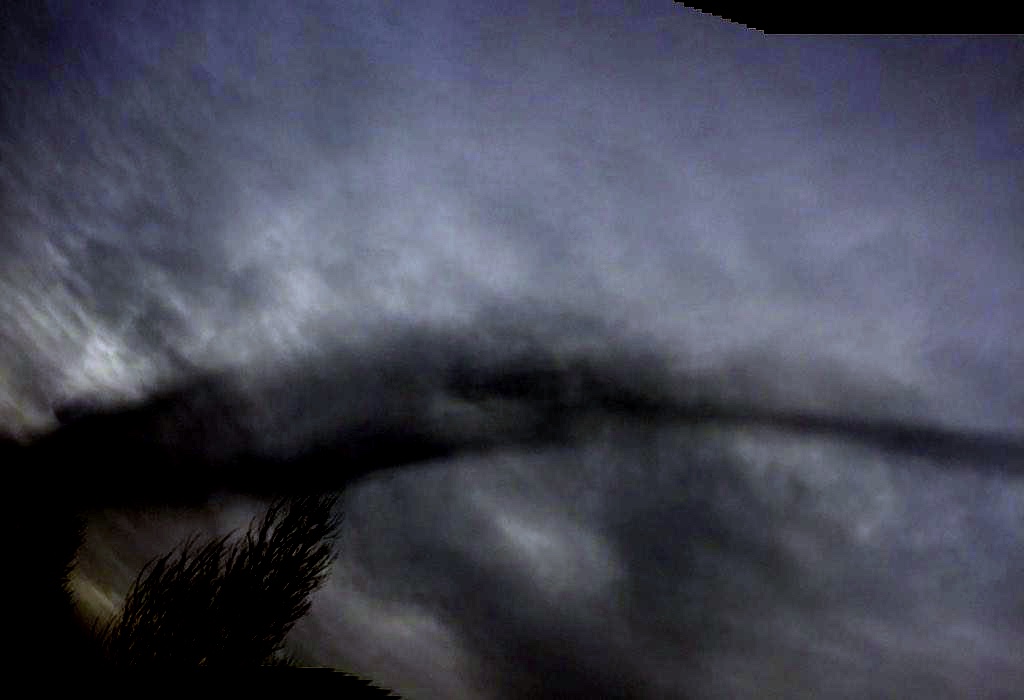 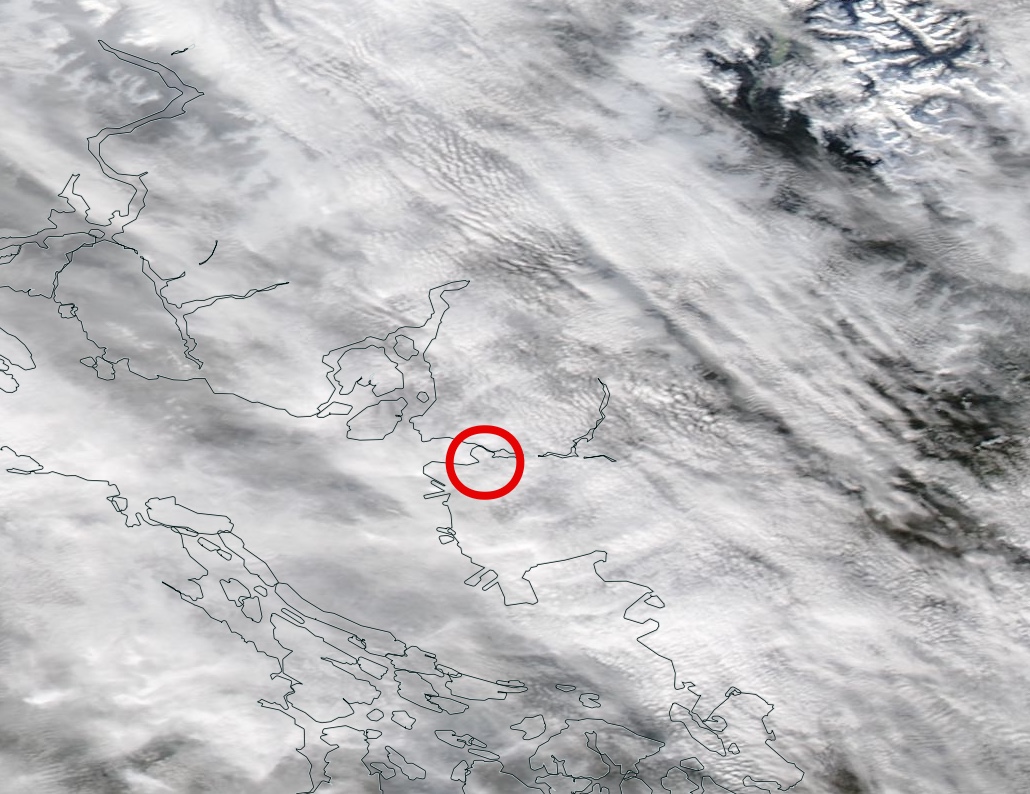 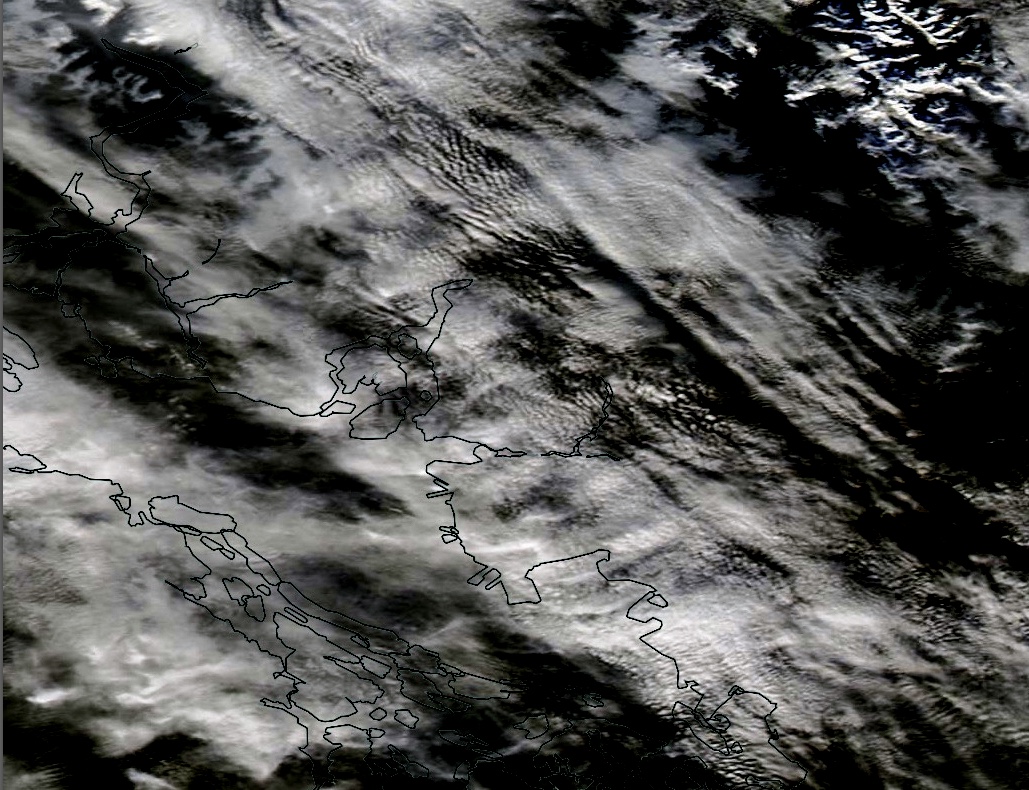 oh. they look above it to me. in layers. what if there were multiple thin layers.. like here the layer is higher then teh bottom layer. if the bottom layer were thinner and the top layer was a sheet, you dont think you would see the top cloud layer through t he bottom?

Mick it kind of looks similar to this one. I took this picture on Sunday January 18 near Cocoa Florida, and I think it is a combination of a contrail shadow and a contrail above the cloud. Except I think the guy on twitter photographed something that was at lower altitude. It almost looks like an airplane went through the clouds at low altitude and pushed the cloud out of the way. 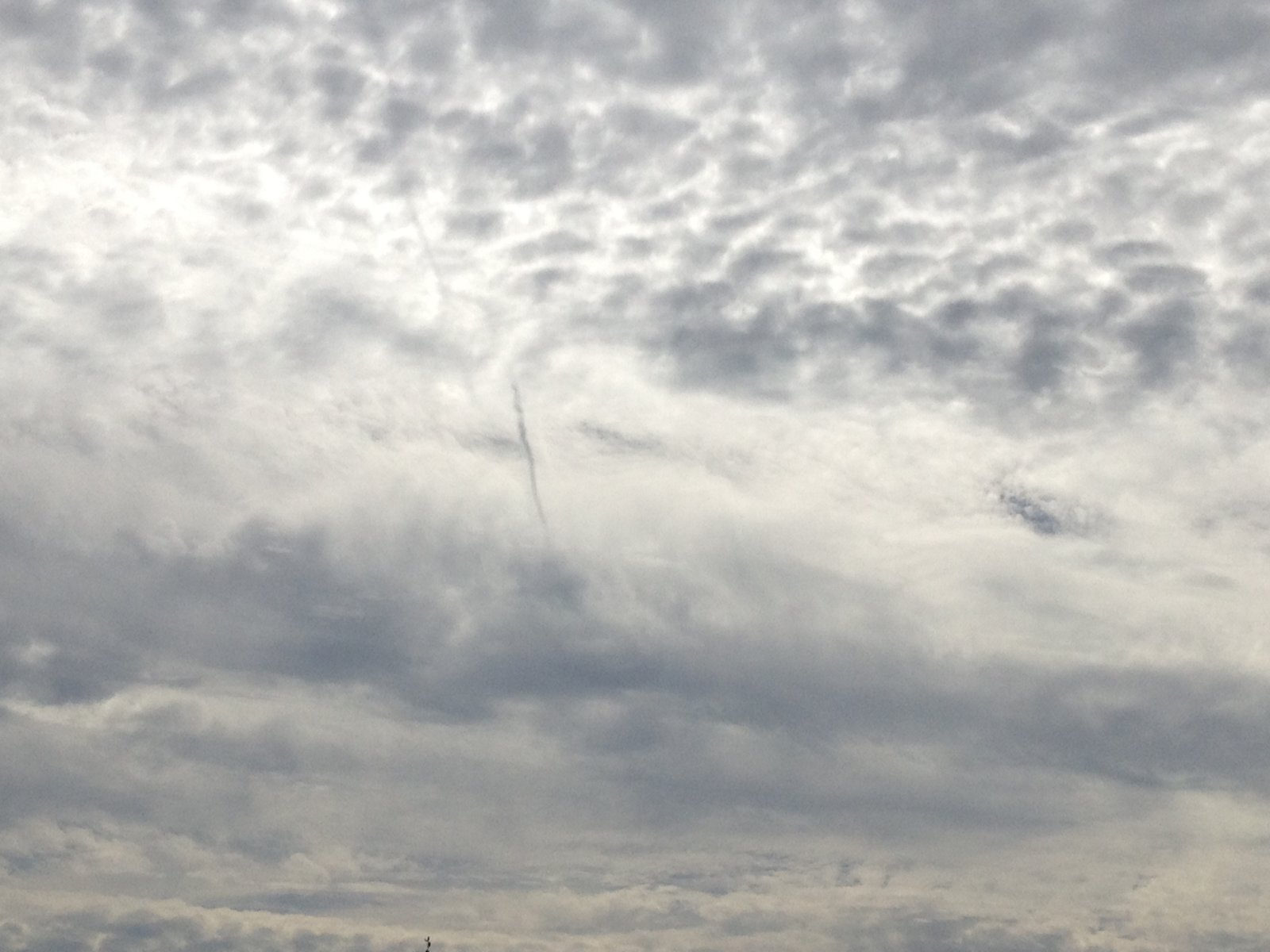 The first OP picture probably has been taken from Nofrills rooftop parking on the left: 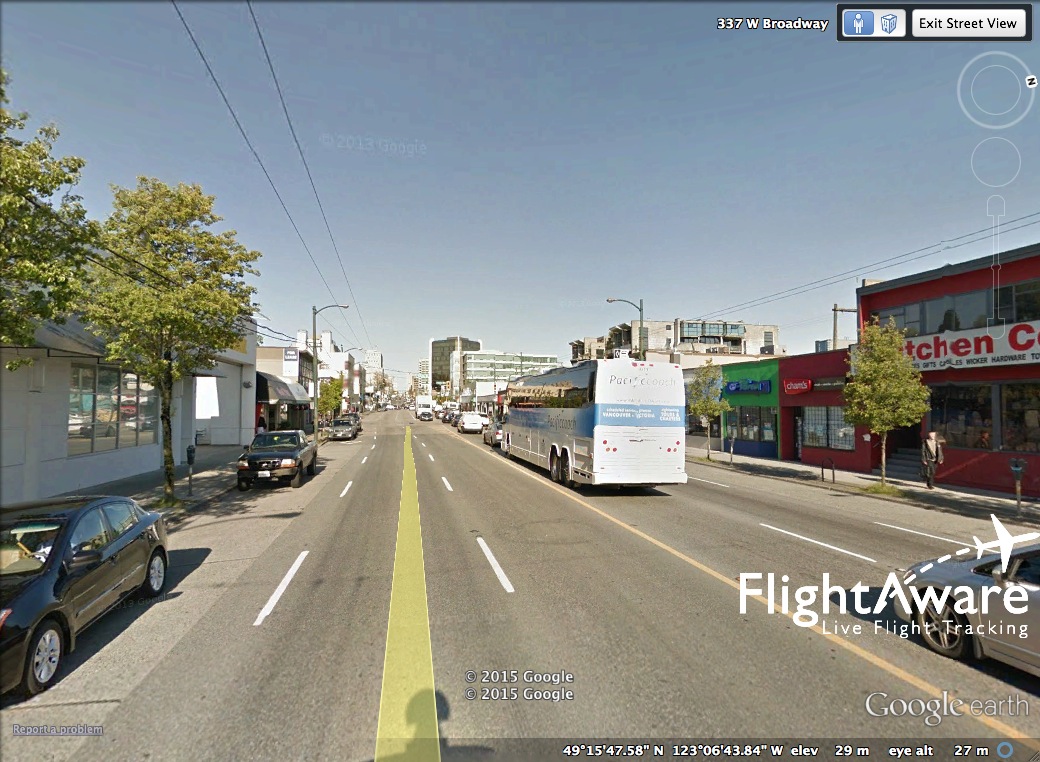 Could it be that the dark line is actually an out of focus wire?

Trailspotter said:
Could it be that the dark line is actually an out of focus wire?
Click to expand...

No, it's too big and dark for that. Unless it was something right in front of the lens it hardly going to show.

I shall do an experiment to verify debunk this.
Last edited: Feb 1, 2015

Well I debunked myself by getting something bigger and darker 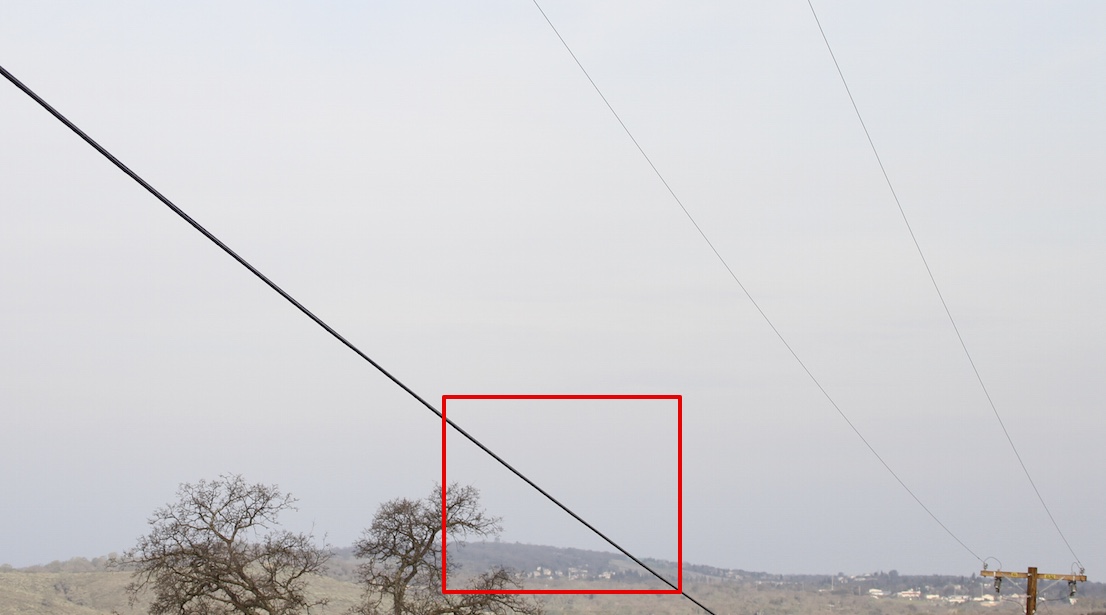 The following is from physically zooming in to the red area in an approx 50mm photo, it's not cropping the above photo, it's a full frame photo at 500mm 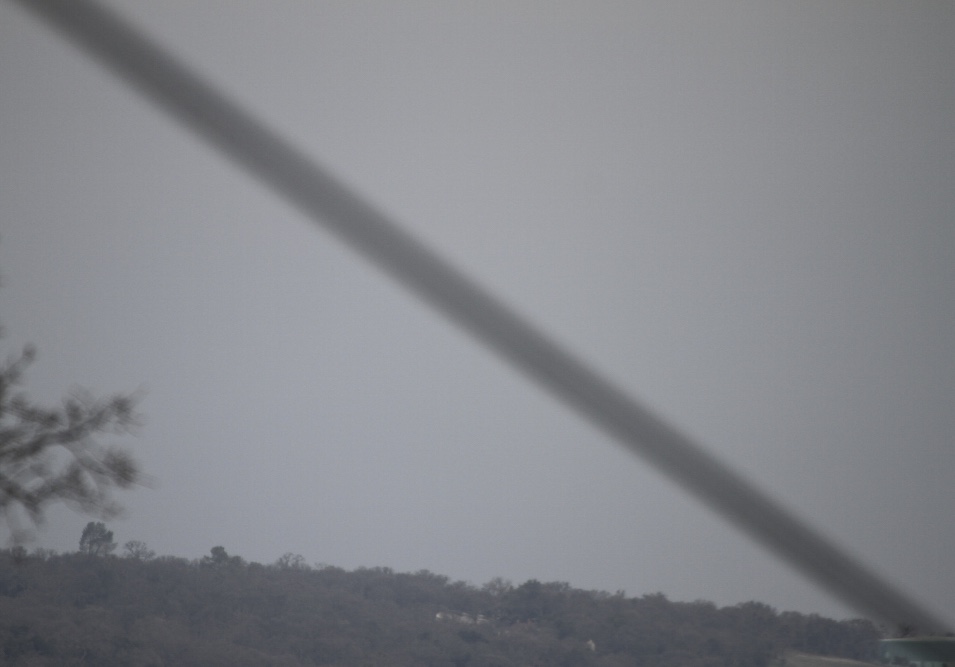 However:
Here's a sequence of four zoom levels on a cable for reference: 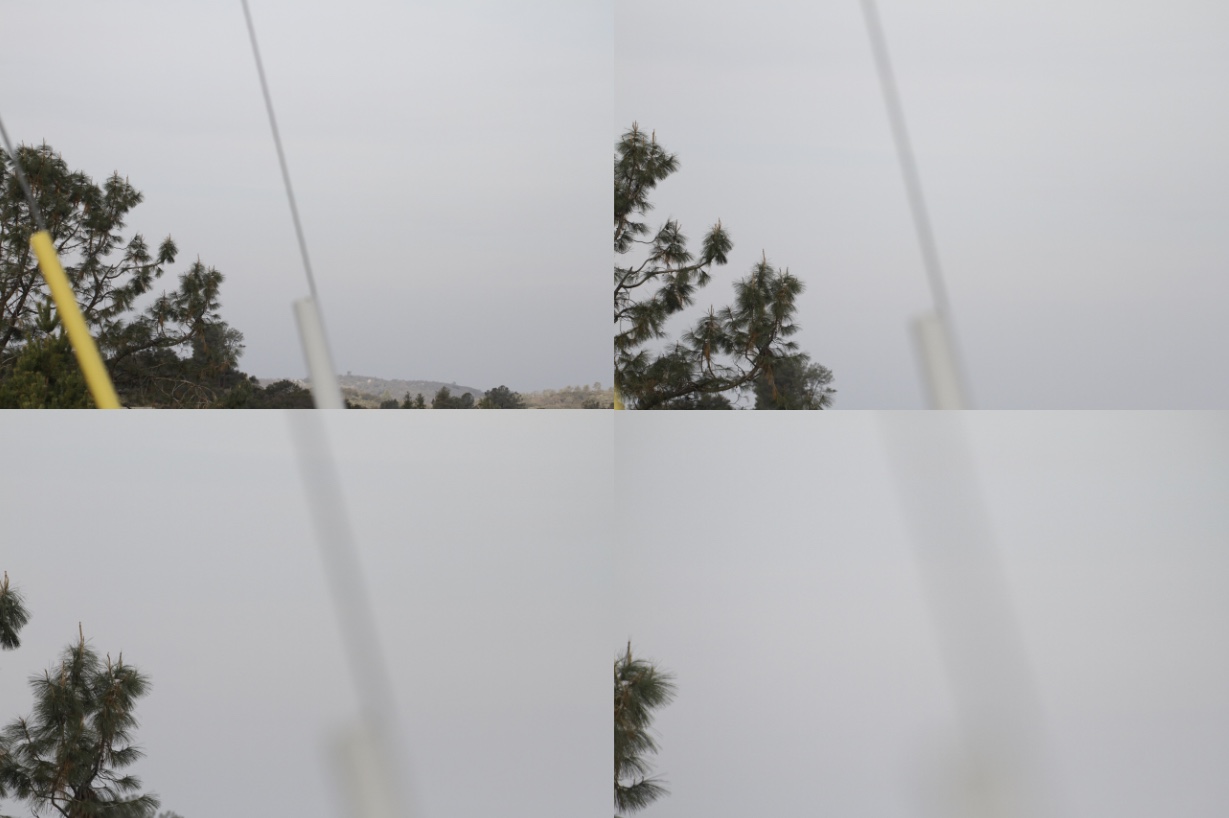 I'll just throw this out there without making any claims. I saw something similar just recently as an airliner emerged from some clouds on it's final approach. It seemed to pull the cloud deck down behind it, leaving a kind of wake trail. The trail wasn't very long and dissipated in less than a minute. Not a detailed description I know, but I was driving at the the time.

I did pull over to hopefully record the next plane but unfortunately it was a singular event. No other plane reproduced the phenomenon so after 15 minutes I gave up.

It looked a little like this image but I didn't see the obvious vortex swirl from my vantage point. 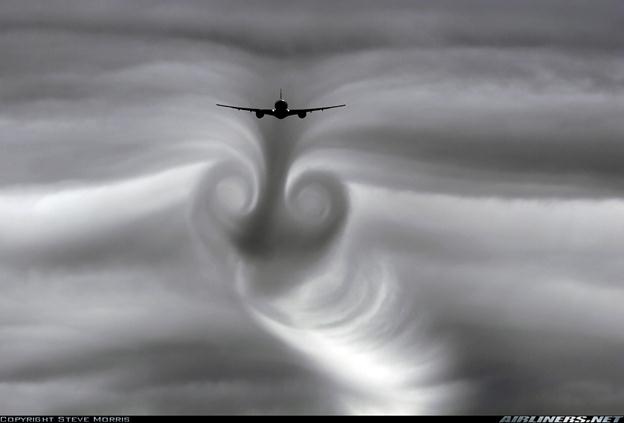 Adding the OP photo to Google Earth with default FOV of 50° supports the suggestion of no big zoom being used: 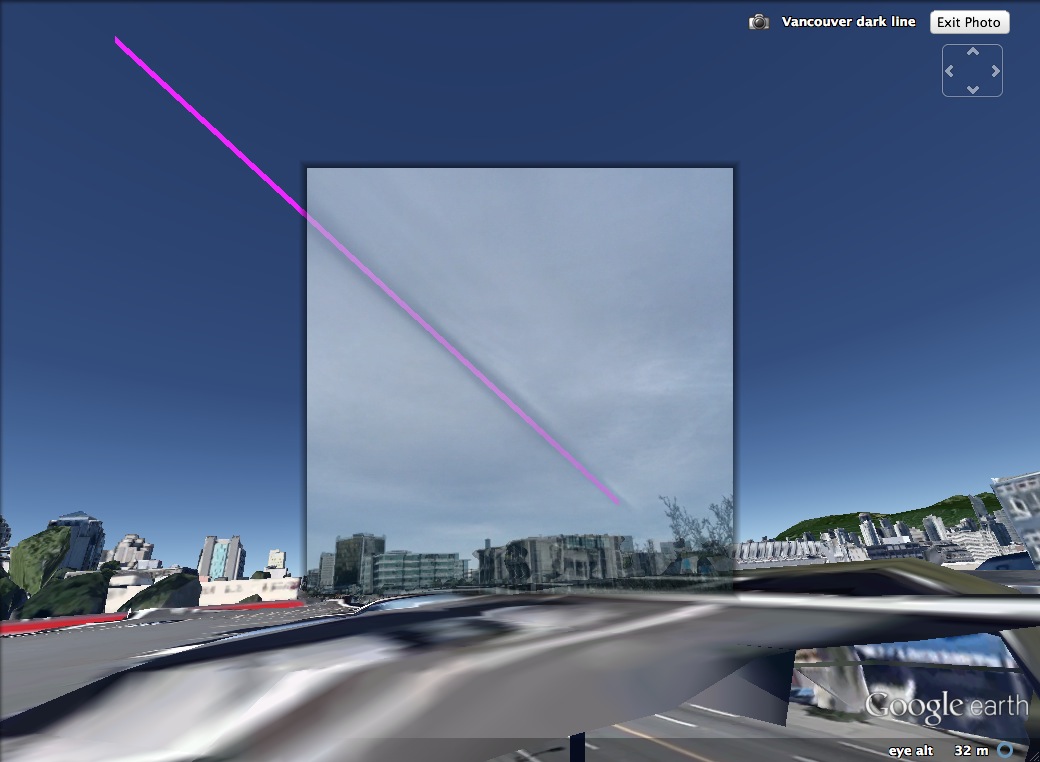 Modelling the dark line at the altitude of about 25,000 ft gives its heading being about 135°: 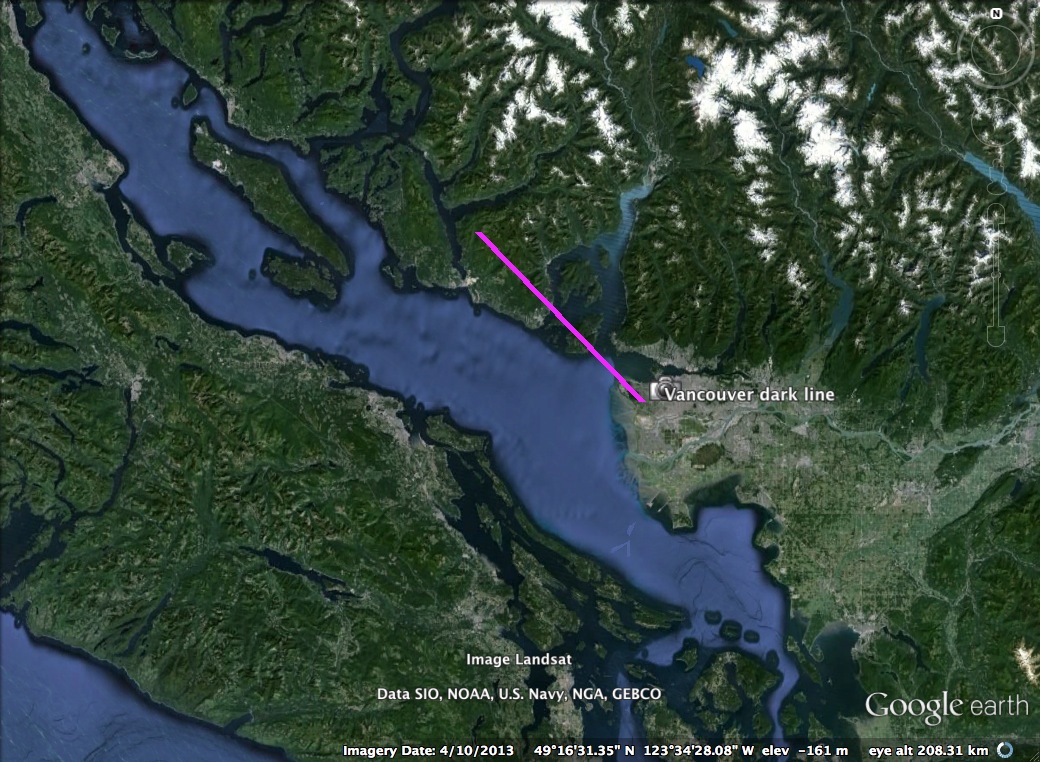 The Sun azimuth at the time was almost perpendicular to the line, about 215°, and the Sun elevation was about 17°. Provided the dark line was a contrail shadow, the actual contrail would be about 10,000 ft higher and about 7 miles further in the Sun direction, that is, over the Strait of Georgia. The dark line heading is in a good agreement of the main direction of air traffic in that area, however FR24 playback shows no suitable candidate flight at the time of the photo. Still, there remains the possibility of older contrail formed over Vancouver island and carried by the wind toward the city.

@Trailspotter These are really excellent posts. You should write some tutorials on how you seem to import flight track data into google earth to create these composite images. Share your tips and tricks, it's very interesting stuff.

Trailspotter said:
Still, there remains the possibility of older contrail formed over Vancouver island and carried by the wind toward the city.
Click to expand...

Yes, I saw a couple of flights about 50 miles to the west on a similar track. I checked the wind in Seattle, and it was blowing from the west at about 50mph, but the two planes I saw were too far away. Maybe go back in time more.

However, compare the angle you came up with with the angle of the clouds in satellite images:

i was looking at photos uploaded to flicker the last few days and i did see alot of very dark very linear clouds. but the OP pic looks awful 'tight' for a cloud. still, it's possible.

deirdre said:
i was looking at photos uploaded to flicker the last few days and i did see alot of very dark very linear clouds. but the OP pic looks awful 'tight' for a cloud. still, it's possible.
Click to expand...

I have checked flickr photos too looking for an independent sighting of this dark line. The OP photo was taken in the middle of the day in the centre of a big city. There certainly were a lot of people in the street at the time, so more pictures can be expected. However, so far I have found none

Trailspotter said:
OK, it is real! I found another photo of this dark line
in the photostream of a tourist:
https://www.flickr.com/photos/129321845@N06/page3/
Click to expand...

And here is how my model line (extended further southwest) looks from the location of the new photo (Stanley Park, facing South): 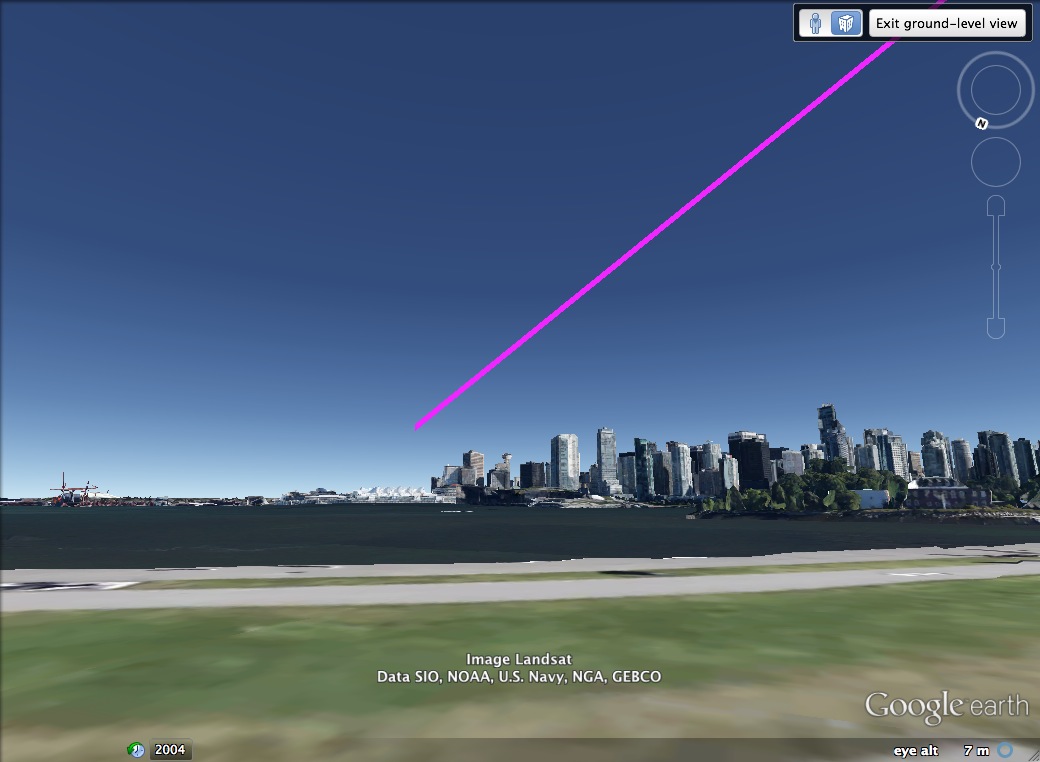 It is a slightly different angle, but it would get steeper as the contrail/linear cloud moves East with the wind.

deirdre said:
but the OP pic looks awful 'tight' for a cloud.
Click to expand...

If it is a shadow projected onto a lower cloud layer it may make a difference to its perceived 'tightness', as opposed to being a sighting of the cloud itself.

I found one more instagram picture geotagged to Deep Cove in North Vancouver. It was uploaded yesterday, Sunday 1st February, but has a hashtag #adventuresaturdays and probably was taken on the previous day.
In the background, there is a dark line in the sky originating from a cloud formation, which features are similar to the cloud at the bottom end of the dark line in the Stanley Park photo above. Adding the new photo to Google Earth showed that it was taken in Southerly direction and its dark line matches my model line with the cloud formation being at the southwest end of it: 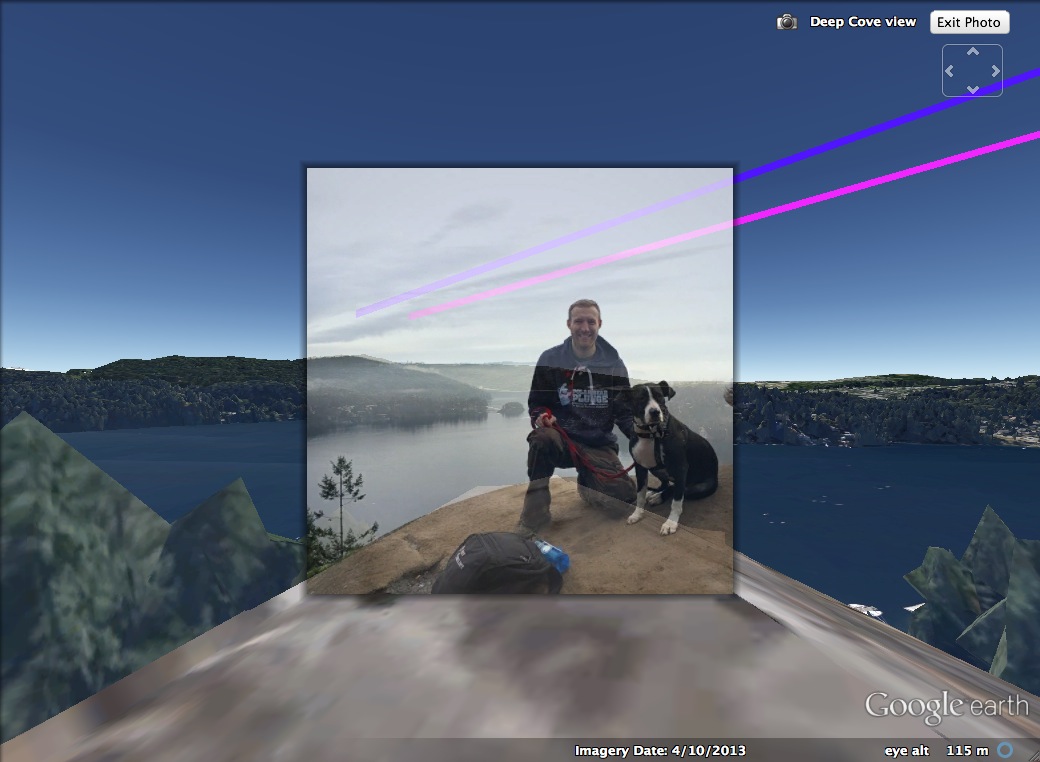 Therefore, the dark line in the sky over Vancouver almost certainly was a shadow of a natural linear cloud after all

PS The estimated length of this line is about 70 miles. The positions of its models are shown below in magenta (for central Vancouver view) and blue (Staley Park view). 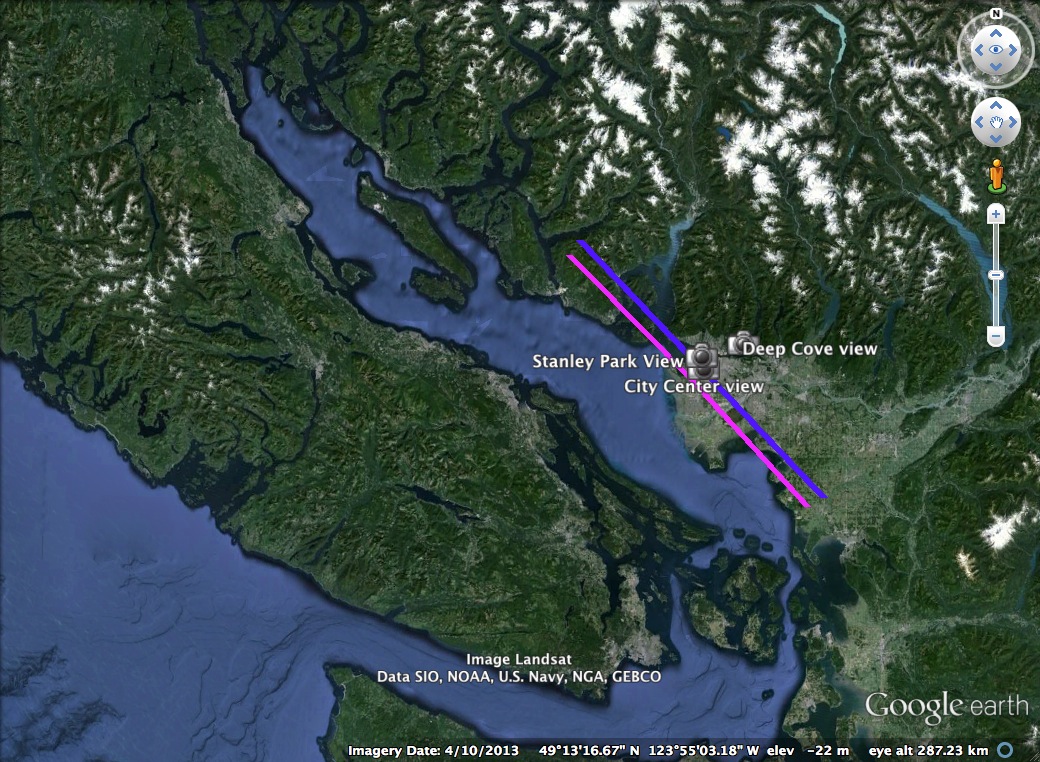 Trailspotter said:
Therefore, the dark line in the sky over Vancouver almost certainly was a shadow of a natural linear cloud after all
Click to expand...

I agree, it lines up so well with existing cloud structures, and there were no planes nearby, and it does not really look like a contrail shadow to me, so natural cloud, and luck vantage point seem to explain the photo.
You must log in or register to reply here.