There is a german website specialised on UFOs, paranormal stuff and so on.

And there is an article on this website mentioning a cylinder-shaped object and showing this object on film.

I summarize the informations in this article as follows:

- Two whitnesses at 4.55 in the morning of the 4th of march 2022 in Essen-Frillendorf as workers, smoking, on a company parking park. They looked to southeast

- according to the man who filmed, Tarik Altundag, the object was in the sky partly stationary, partly moving „Fast, but not racing or moving erratically“

- “The thing was brighter than it was on the video. Then it became more and more darker and disappeared“ 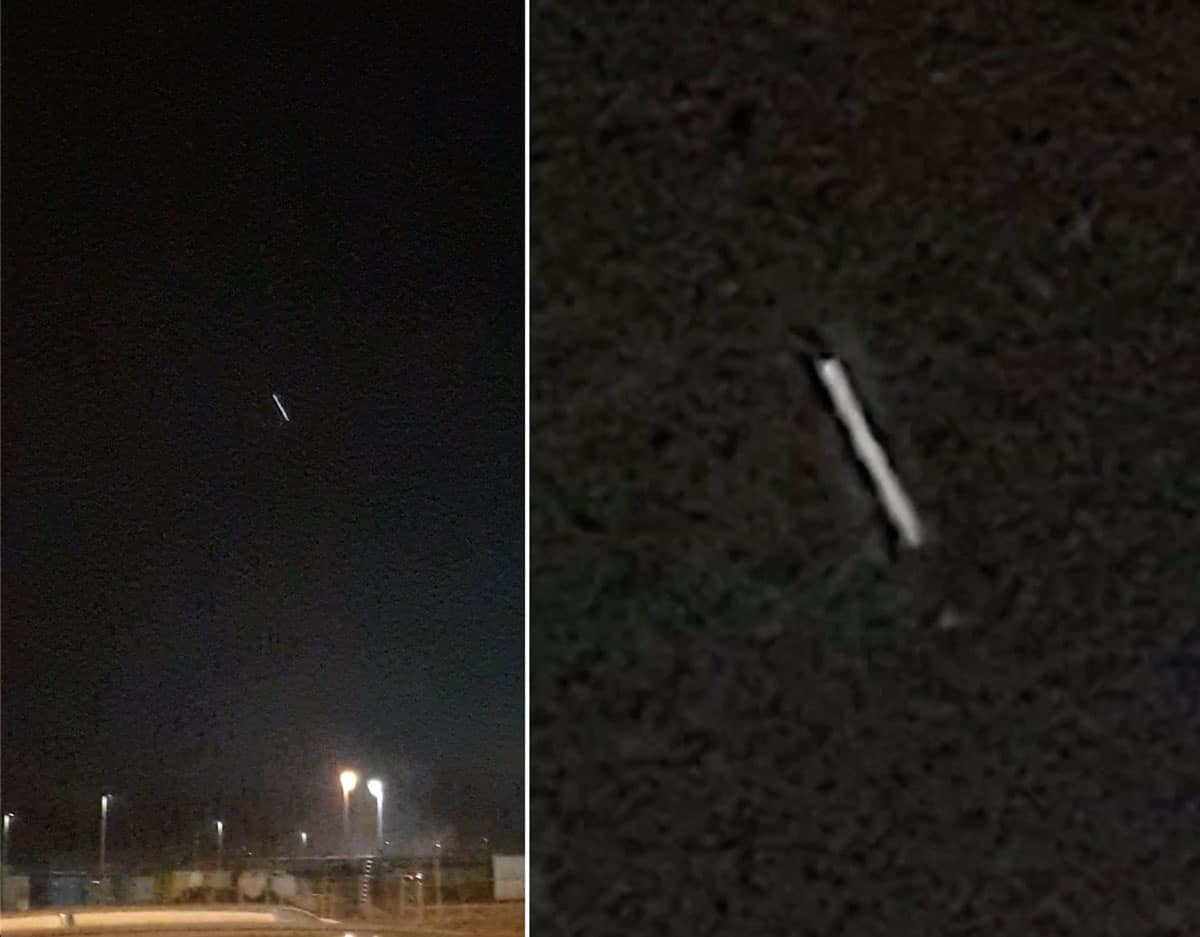 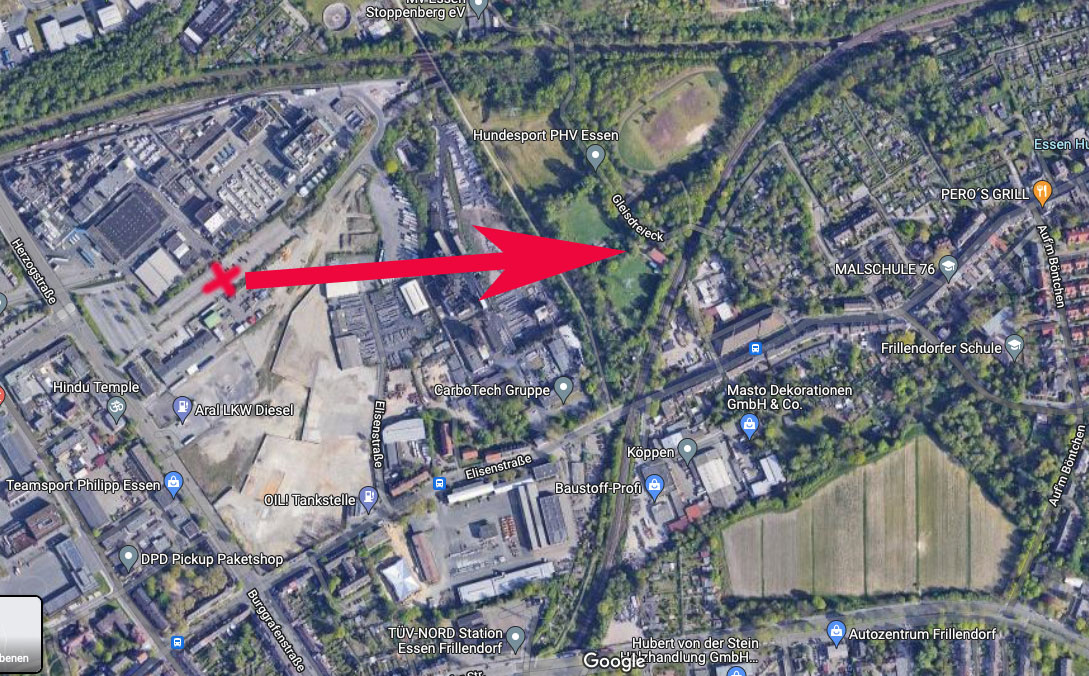 That looks an awful lot like a time lapse exposure of Venus.

Venus was in the SE part of the sky on that morning. Which matches the direction the witness claims he was looking. 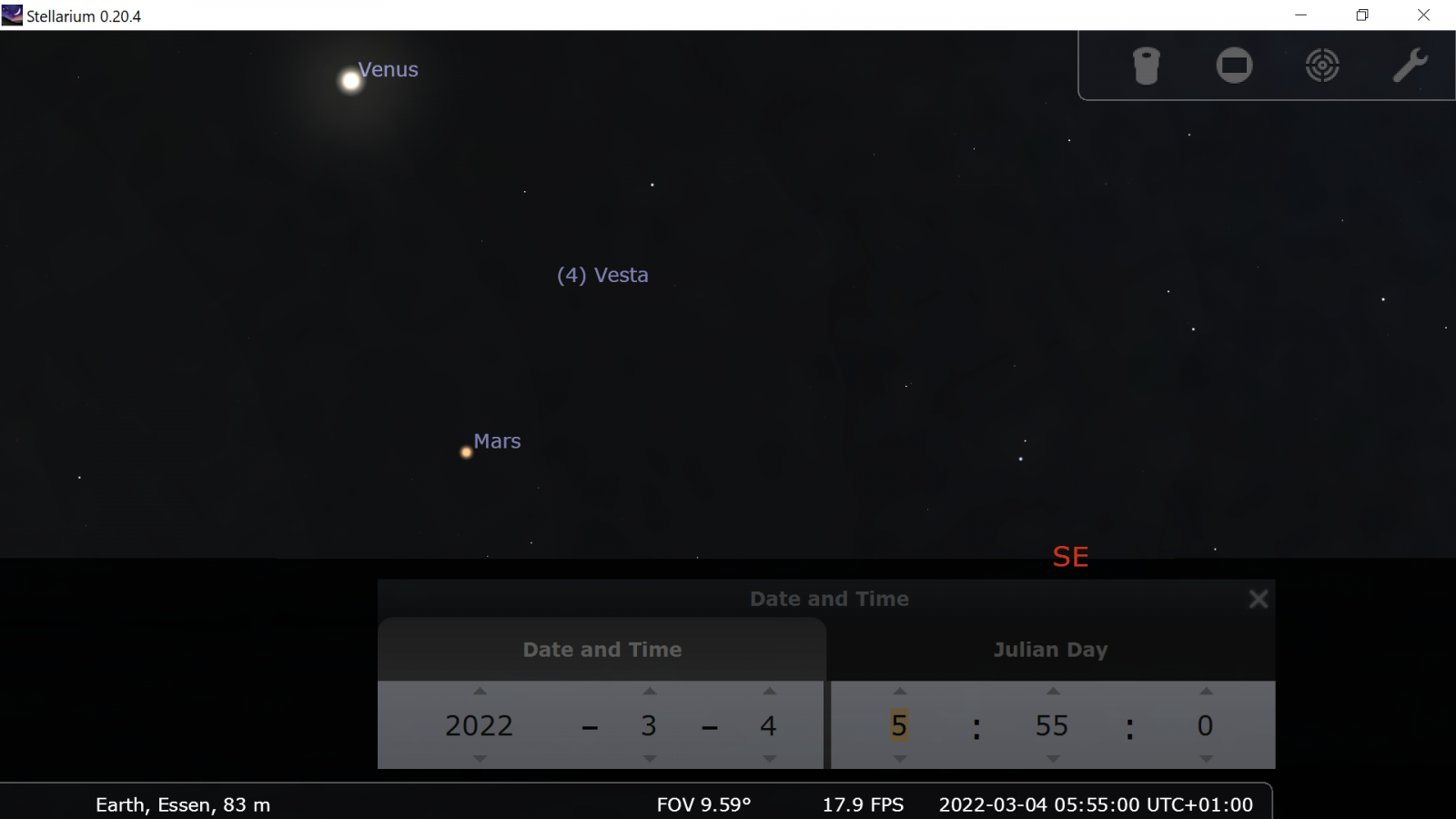 Problem 2: The streak is slanting the wrong way.
But what if the image is mirror imaged?

Problem 3: This is a video.
But what if this is a video of a screen on which a still picture is being displayed?

Problem 4: A time lapse photo would require a tripod and a camera that is capable of taking a time lapse, which doesn't match the witness testimony.
But what if this is a straight out hoax?


Much more likely however, despite protestations... this is a Starlink train.

From the OP article. Google Translation from German...

Although these punctiform appearing satellites can lead to a comparable light trail (line) on photos taken with a somewhat longer exposure time (as is often the case when taking photos in the dark), Altundag's photos are not photos, but ones Video recording, on the basis of which this effect can be ruled out as an explanation.

Even the witness and filmmaker Tarik Atundag himself does not believe that such a satellite train is an explanation for what he and his colleague saw and filmed: "I myself have already looked at the SpaceX satellite trains together with my son. They look completely different when the individual satellites move slowly across the sky like a string of pearls, although they are at least a significant distance apart. This was different – you can see that on the film.”
Click to expand...

But he's seen Starlink trains that have had time to string out. This is a recent deployment that is bunched up.

This site can tell you when to look for Starlink trains in the future, but I'm not aware of a site that keeps track of past sighting times.

But I think it is significant that there will be bright sightings in the skies over Essen the next two days. 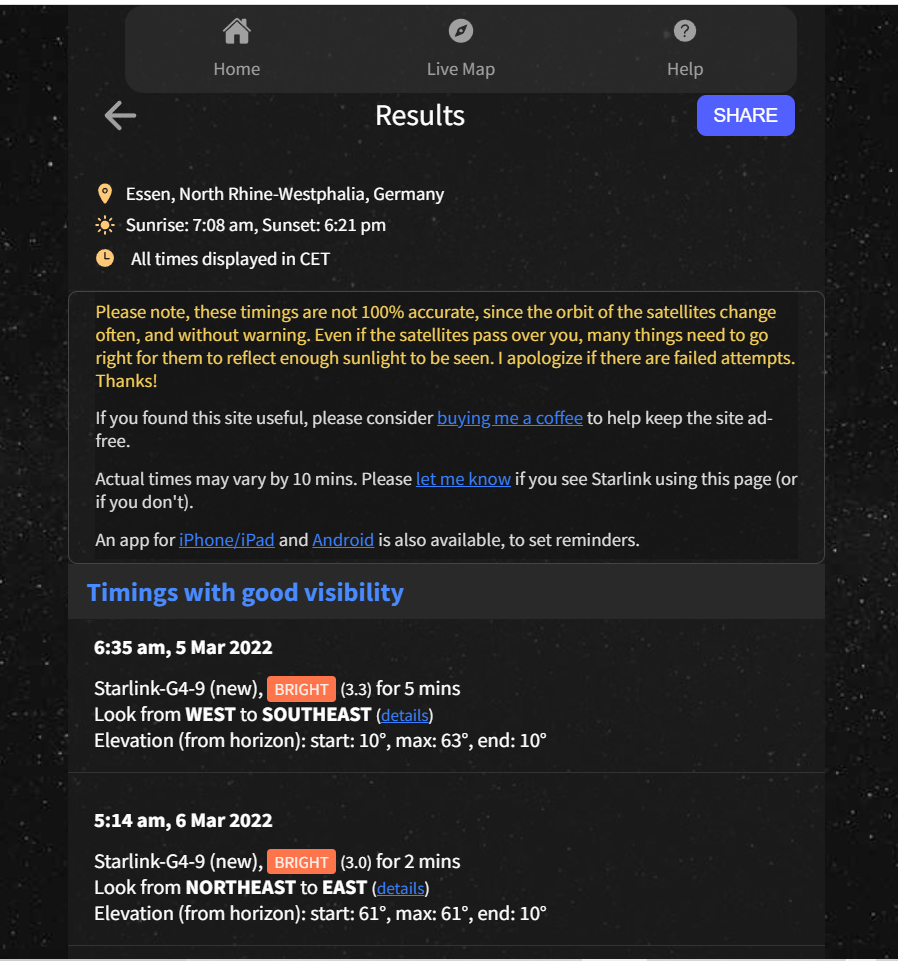 This is the tightest Starlink train I've been able to find so far on YT.

That does look a lot like a Starlink train. Someone who's not familiar with them might very well discard it like the witness does because at the time he saw it pass overhead they were still in their inital bunched-up configuration. Fresh off the rocket, so to speak. It also looks like the groundtrack was quite close so he would have had kind of a head-on view of the leaving train, so perspective would have further shortened its appearance and reduced its apparent speed.

This video was taken from Switzerland, 600 km south, at the same time.

Very compact satellite train , Starlink G4-9, which was launched only half a day earlier from Florida, is seen March 4, 2022 at 04:53 AM from Vétroz in southwestern Switzerland, looking low over the northeastern horizon as the Starlink satellites fly above Germany. This was about half a day after launch from Florida. At about 9 seconds you can also see a shooting star ( meteor ) to the right of the satellite train. most of the flyby was invisible because the satellites were in Earth's shadow , only illuminated after shadow exit.
Click to expand...

And here's the same person with another video from a day later. It's a dimmer pass but the sats are already more spread out and, uh, 'traditional looking'.

VERY faintly caught, G4-9 Starlink satellite train , launched less than 2 days earlier, seen in Switzerland doing shadow exit below Cassiopeia low over NE horizon at 05:05 AM ... according to Heavens-Above only mag. 5 , but it seemed fainter... not seen naked eye, and hardly visible in EVF.
Click to expand...

Starlink seems to match what is describes and what was photographed pretty well, and the video from https://www.grenzwissenschaft-aktue...oermiges-ufo-ueber-essen-frillendorf20220305/ matches Easy Muffin's first video in the post above this one pretty exactly. It is interesting that the word "cylinder" gets attached to an essentially 2 dimensional line of light, similarly to the way and dot of light will be described as an orb, or more recently as a tictac. Seems folks who want to see a UFO see the classic shape they are expecting/hoping to see, whether it is there or not. A reminder that unsupported eyewitness accounts are worth very little.

And in passing, video is a useful thing to have. If all we had was the stills in Ulrich's opening post, I'd be pretty convinced it was a flying insect "rod," even down to what I'd suspect were matching wingbeats indicated by the red dots in the pic below. 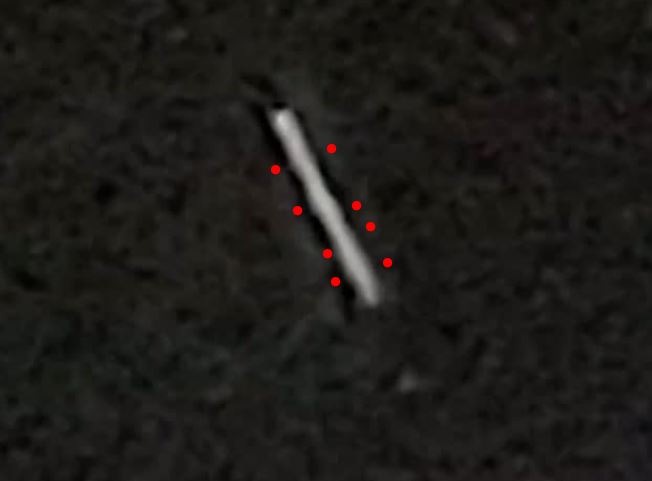 But we have the video, and it is pretty decisive. Starlink, just after launch, looks exactly like what was filmed, and the description of the "object" darkening and disappearing sounds a lot like what you'd expect as the satellites cruise into the shadow of the Earth and out of the sunlight.

Just noticed that the linked artice has been updated, https://www.grenzwissenschaft-aktuell.de/ufo-sichtung-von-essen-frillendorf-geklaert20220306/

They came to the same conclusion, saying it's been identified as Starlink 4-9. They included the same Swiss video and a number of photos that were sent in by readers. Lots of people out and about in the wee hours!
You must log in or register to reply here.