I believe this counts as pseudoscience.

The Economic Forecast Agency (EFA) claims to use "reliable models for long-term forecasting" of various financial markets with the implication being that these models provide "accurate forecasts":

Given the unpredictable nature of financial markets and exchange rates it seems a bold and dubious claim and I decided to put it to the test by seeing how they've done historically on certain currency exchanges.

(I didn't see any historical data or measures on their site but luckily the urls for the various markets are still the same as they were five years ago and so everything needed can be found at archive.org) 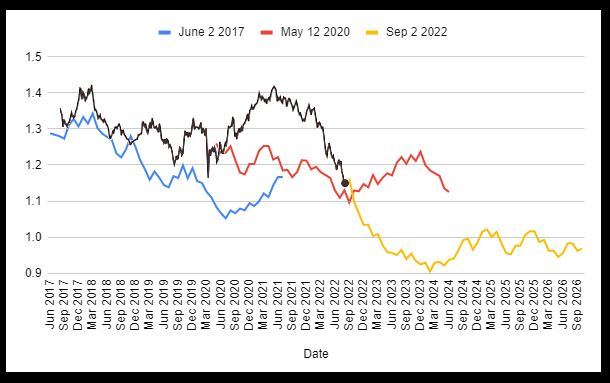 The black line is what actually happened while the other three are the "long-term forecasts" made as of the dates in the legend. As we can see there's no real correlation - other than, I would say, can be expected by chance and/or our tendency to seek patterns - and their predictions change substantially from one to the next (nothing intrinsically wrong with that, but it does support the idea that its being "made up as it goes").

Next USD to MXN: 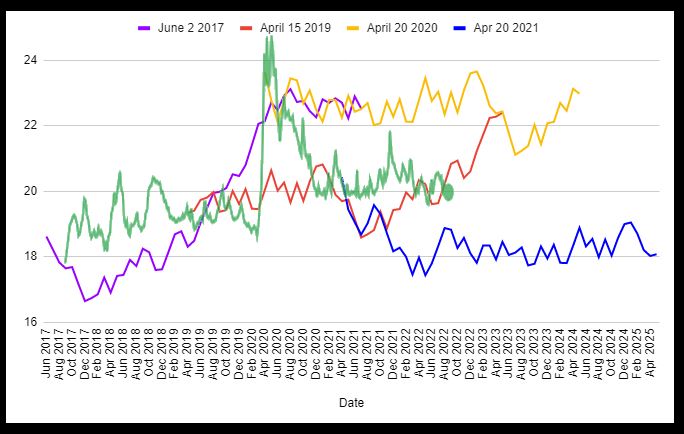 As above, 'cept the green line is the true historical data, and again it's difficult to see any kind of "success". Following the purple line (2017 prediction) it does appear as though reality 'catches up' around April 2020 and there's a somewhat similar trend in both sets of data - but, then again, they quickly diverge and, in any case, it appears that the model had already "changed its mind" by then - going by the 2019/red line - and was predicting something quite different.

And, of course, given the relative high of April 2020 the model (yellow line) then predicts it will mostly stay around there - pretty much always beween 22 and 24 - whereas in reality it dropped back down to 20 and rarely peeked above 21.

Furthermore, because of this drop, the model in April 2021 (blue line) continues the trend of a fall - predicting lows under 18 and an average under 19 - which again missed the mark.

It's almost as if it's solely basing it on what's come before and any correlations are pure luck. 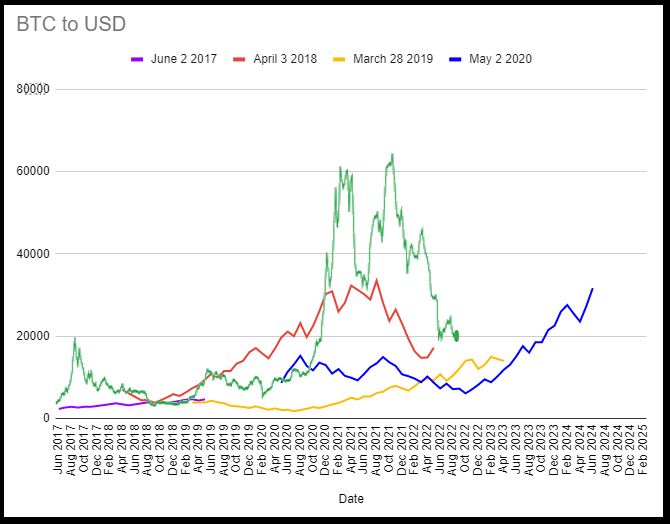 Green line is reality and, again, as far as I can see - chance and apophenia excepting - it completely misses the mark.

Finally, here's their January 2021 prediction for what bitcoin would do: 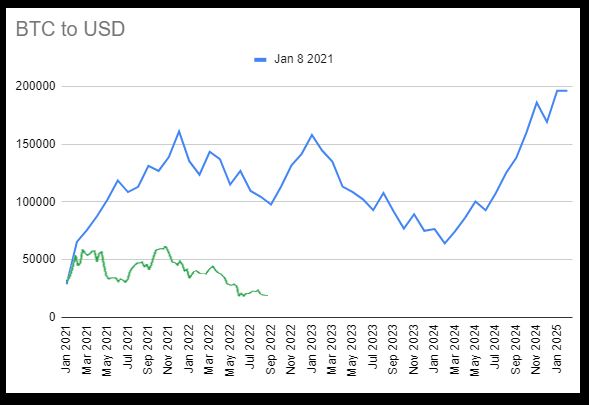 It was so far off base - made when bitcoin was on the rise, and predicting that we would have seen $150,000 by now - that it wouldn't fit on the scale of the previous chart without rendering everything else illegible.

So though not a complete study of the full range of markets I feel fairly confident that their prediction model fails the test and confirms what we all probably suspected: that it would be lovely if financial markets were predictable but, sadly, they're not.

Question is: what are they getting out of this? Can they be making money? Is it some sort of scam? Or just a simple model that puts some figures on a website every month for reasons unknown?
Last edited: Sep 3, 2022

If their model worked, it wouldn't be public—they'd keep it secret and get rich off it.

Is anybody quoting these models to sell something? If they had some kind of actual impact, it'd be more likely to be a scam, and not just a hobby. As it stands, at best they might be earning research grants off it?

Mendel said:
Is anybody quoting these models to sell something? If they had some kind of actual impact, it'd be more likely to be a scam, and not just a hobby.
Click to expand...

That's the curious bit: why maintain it for all these years?

But then, there are plenty of dead/weird sites online whose presence doesn't make much sense.

A couple more charts to show how wildly their predictions fluctuate. In this one the forecasts shown in the red and purple lines were made just 15 days apart, and though they follow vaguely similar trends at their widest they diverge by over $100,000 (the black line is reality). 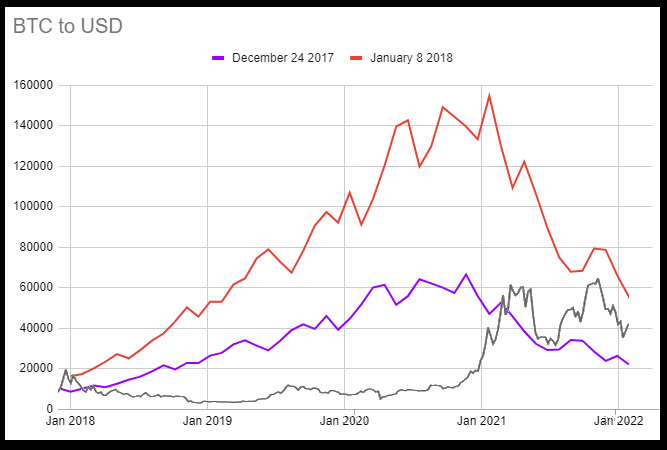 Finally, this one adds in some later predictions that were actually much less optimistic. I guess at the end of 2017 the model predicted bitcoin was going to skyrocket whereas 2018 and 2019 actually saw the value fall. The three newer models, therefore, barely tickle $20,000: 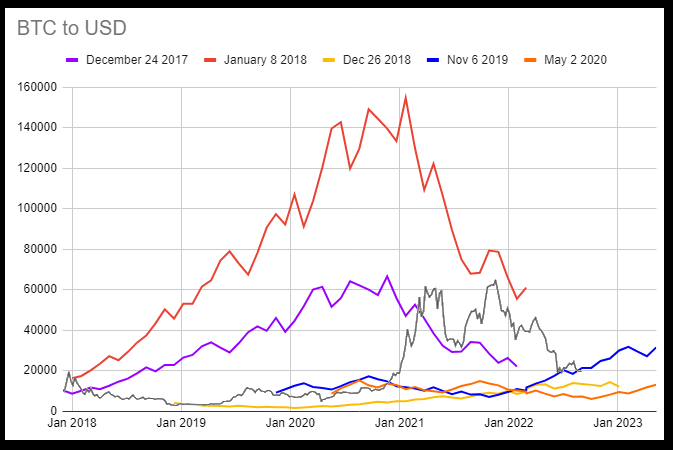 Rory said:
It's all just pie in the sky.
Click to expand...

I'm seeing lots of articles from Harvard Business School, Forbes etc on these forecast things. They are all touch and go apparently. None consistently accurate(ish) and none accurate ever in all areas.

also google: "the economy forecast agency" corporate client
i see lots of sites saying they do this for corporate clients but havent scoured long enough to find that stated by them.
Did find this link below (and IHS..click Financial services" seems pretty big on making money for IHS )

either way, sounds like someone bought TEFA, so they must be worth something.


With strong leadership skills and the ability to adapt to change, Catherine Trani brings more than three decades of experience to IHS, Inc. The global information company offers expert analysis, research and insight into today’s business landscape, and serves more than 140 countries. She became involved in the industry after joining the Economic Forecast Agency, and prepared for the job by utilizing hands-on experience. Ms. Trani landed at IHS after they acquired the Economic Forecast Agency, and currently serves as their senior manager of global delivery.

Seems hard to imagine that they employ people or were "acquired" - even today it's a very peculiar and barebones website using the same write-ups as it did nearly ten years ago, and they have almost zero web presence. Also no mention of EFA on IHS's fairly extensive history and acquisitions page either.

Feels like something fishy's going on to me; gonna look a little deeper...

Also, looking at an earlier version of the website here -

it's incredibly basic and doesn't give any indication of exactly how these numbers are arrived at or what their track record is.

I had a look at their 2013 Euro to USD forecast and got this: 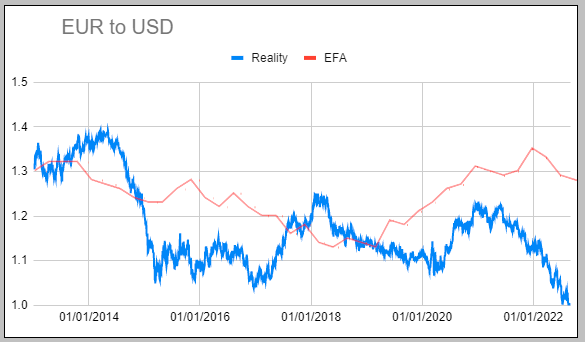 Again, it seems completely random and pointless - but I suppose if you're making 5, 10 and 15-year forecasts you've got a lot of wiggle room and a lot of escape opportunities till someone notices it's bunkum.

You can only make predictions based on things you know have happened and can predict will happen. Economics can be ridiculously twitchy to random events, driven as much or more by short term perceptions and expectations as long term trends.

Rory said:
Also, looking at an earlier version of the website here -

if you click contacts its in a foreign language.
and then i found this uk link. maybe its real name is something (whatever language that is). https://poundf.co.uk/ this site at least looks fancier.


i can find no business profiles on american sites.

deirdre said:
and then i found this uk link https://poundf.co.uk/ this site at least looks fancier.
Click to expand...

Ooh, that is impressive - all flashing and constantly changing. Though I did notice the contact page has nowhere to put an email address.

Much better than this one though: https://usdforecast.com/

the russian version has a bit more info on their page. (didnt want to click it so i just used the cached version)

The Economic Forecasting Agency (APECON) conducts research for corporations and holding companies operating in the real sector of the economy. Our profile is long-term forecasting of economic indicators that affect the market risks of our clients.
We forecast the cost of oil, metals and a number of other goods, exchange rates, prices for precious metals, interest rates of borrowing LIBOR, EURIBOR, MosPrime, etc., inflation in the Russian Federation, the USA and the Eurozone. Forecasting horizon: 5, 10 and 15 years.
At the request of the client, we will provide a predictive study in the required form convenient for you. This can be a traditional paper report or a copy of it in electronic format.
Experts of the Agency for Economic Forecasting (APECON) apply mathematical and statistical forecasting methods based on objective historical data. The following factors with varying degrees of significance are necessarily taken into account:
The high accuracy of our Agency's forecasts is confirmed by real statistical checks and recognition of clients.
To make strategic decisions, it is necessary to predict the development of the economic situation in the country and the world. An accurate long-term forecast allows you to develop the right solution when budgeting and planning projects and investment programs.
The Economic Forecasting Agency provides long-term forecasts for up to 15 years according to the main indicators of the economy. You can contact us through the feedback form.
Some current forecasts can be found on this website at the following links:
Forecast of the dollar to ruble exchange rate for 2022-2025.
Forecast of the euro to the ruble for 2022-2025.
Oil price forecast for 2022-2025.
Inflation forecast in Russia until 2025.
Forecast of the key rate of the Central Bank of the Russian Federation for 2022-2023

Save the bookmark (icon) on this page to check the forecast tomorrow: