Staff member
Cumbre Vieja is a currently (Sept 19, 2021) erupting volcanic ridge on the Southern end of the island of La Palma, in the Canary Isles, a Spanish territory off the coast of West Africa. It's of interest because it was theorized in 2001 that seismic activity on the island could cause a massive landslide, and in turn create a mega-tsunami. 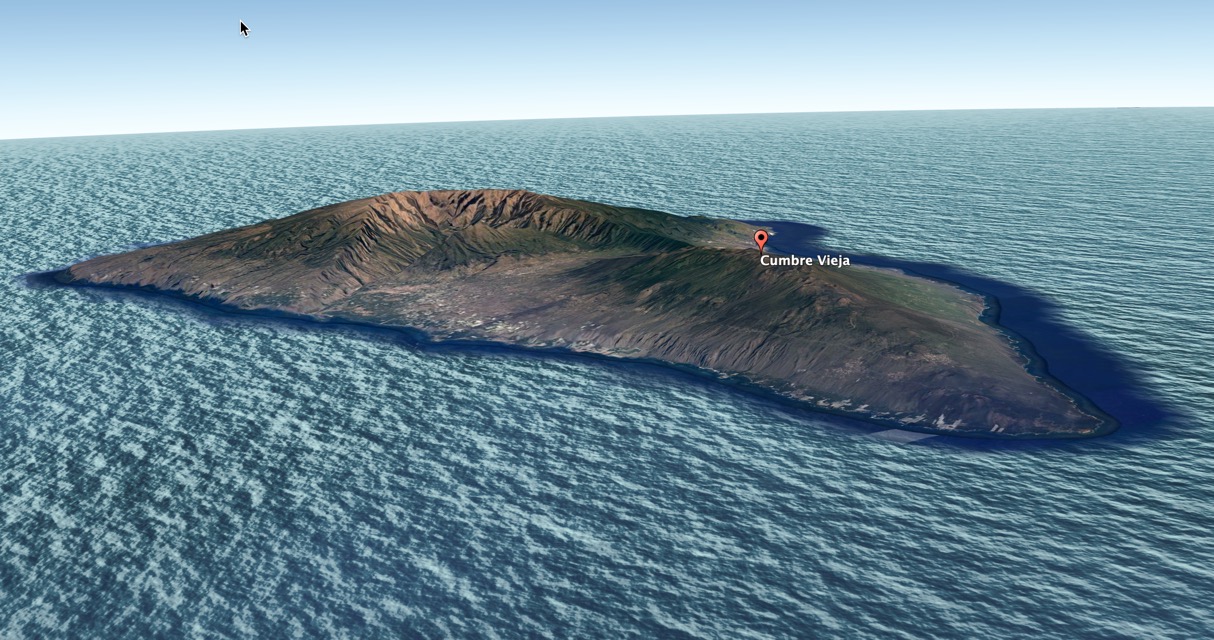 In the event of a collapse driven by a fresh eruption, Day found that anywhere between 150 to 500 cubic kilometres of rock could slide into the ocean at 100 metres per second.

The immense force caused by such a landslide would generate huge waves, hundreds of metres high, that would spread across the Atlantic and hit the coast of the Americas at heights of up to 25 metres.

The pair found that, although there is no historical record of a mega-tsunami caused by the lateral collapse of an oceanic volcano, the geological record shows clear evidence of their power.

A 25m (82 foot) wave would be devastating for low-lying areas like Florida and New York City. Closer to the origin it would be vastly higher, with huge amounts of devastation in Africa and Europe. A civilization defining moment in human history.

Of course this is great fodder for the tabloids, edutainment shows, and the disaster-porn sites. But other studies were less apocalyptic.


Day and Ward's research shocked many when it was released in 2001, but subsequent studies of the potential consequences of a collapse at Cumbe Vieja have significantly played down the risk.

In later years, and often with the benefit of experience hard-won from the 2004 Boxing Day tsunami, scientists using different models have found that any waves created could be considerably smaller.

Some have argued that any collapse of the ridge could not occur with the force described in Ward and Day's paper, with some positing that a collapse would happen in stages.

Others have pointed out that undersea topography could reduce the height of the waves in many areas.

But most agree that if a collapse were to occur, large waves would be generated that would prove tragic for the Canary Islands themselves.

Where scientists differ is how far away effects would be felt and to what extent.

These differences come from variations in the models used, and the input to those models. Ward and Day used a collapse volume of 450 cubic kilometers (km3). A more recent (2019) study by Abedie, et al, uses a smaller volume of just 80 km3, which they thought was consistent with the last big collapse about 300,000 years ago. This still had massive local destruction, but only moderate effects (less than 1 meter) across the atlantic. 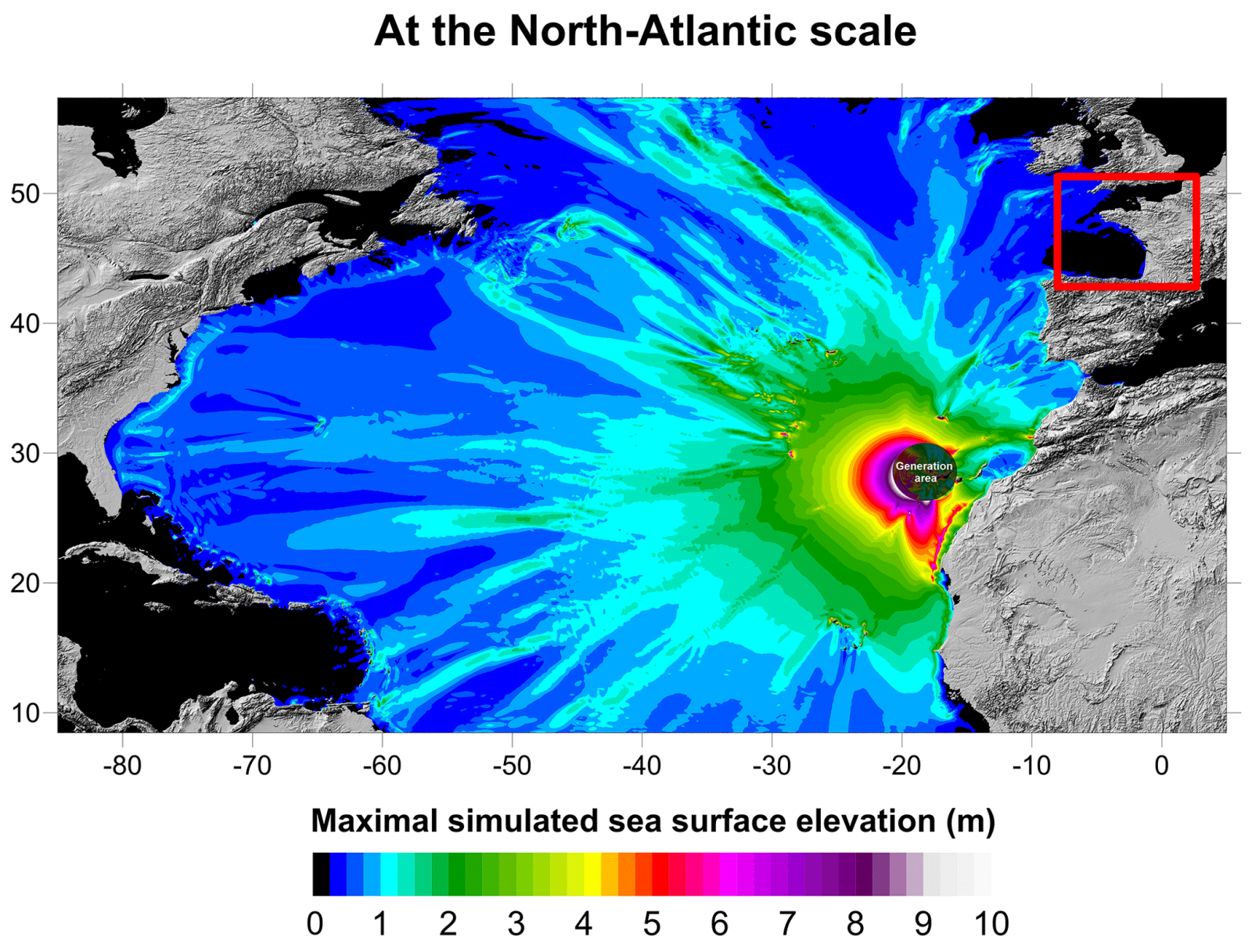 And again, note this more modest disaster is still a one-in-300,000-years event. Cumbre Vieja has been erupting every few decades since then, and there's nothing specific to indicate that this might be the one. 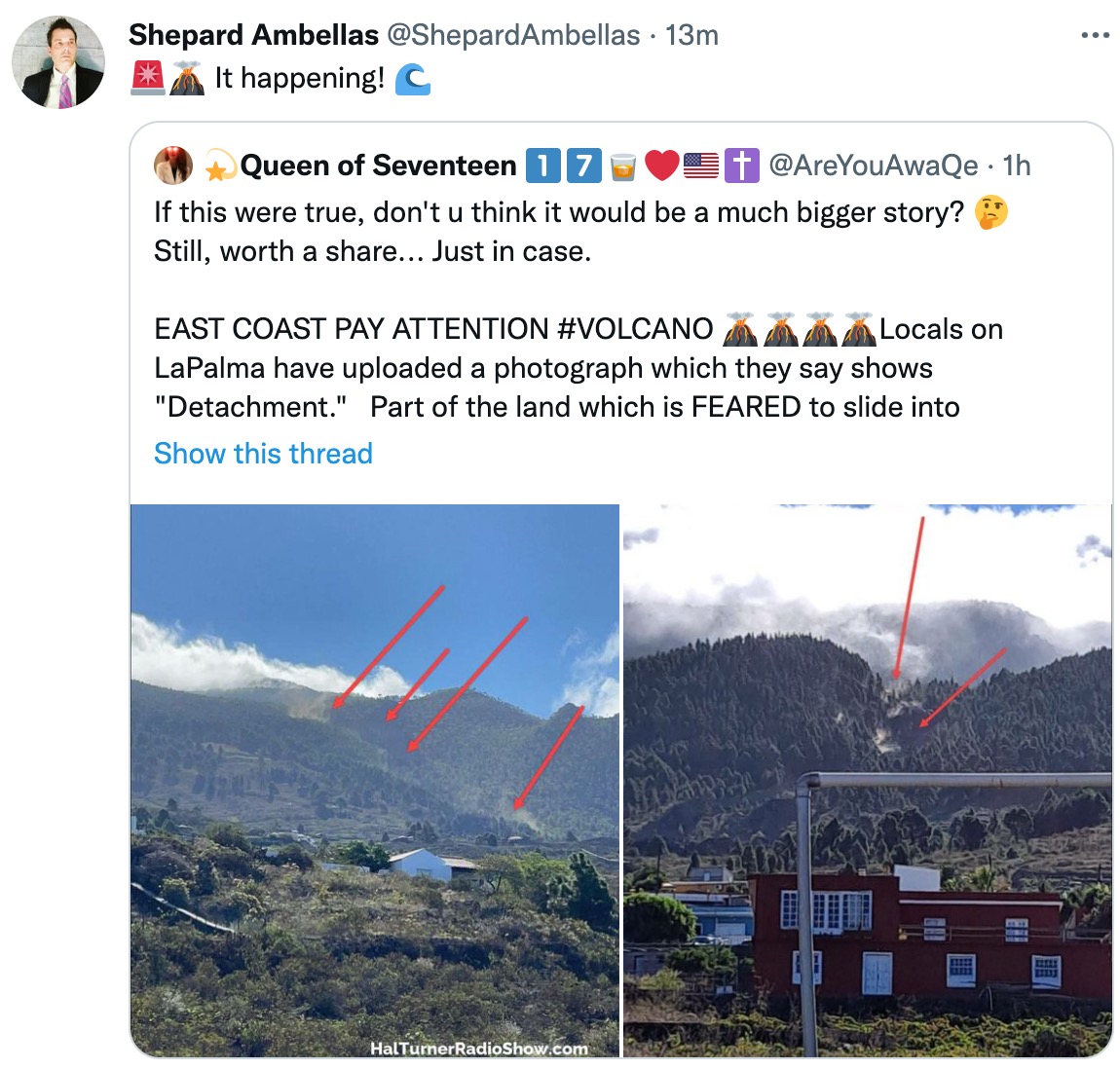 This is being promoted by White Supremacist Hal Turner.

Most of Florida is only about four feet above sea level. The Tsunami 30 Meter (100 feet tall) wave from Las Palma might very well wash over the ENTIRE LANDMASS of the state.

In fact, scientists say that the area impacted by any such Tsunami contains twenty-nine percent (29%) of the US population and they estimate 65 Million DEAD.

Mick West said:
This still had massive local destruction, but only moderate effects (less than 1 meter) across the atlantic.

At least it is unlikely that we'll see that map posted all over the place with claims that it is showing radiation levels... with over 20 centimeters of radiation striking the US coast in some places! 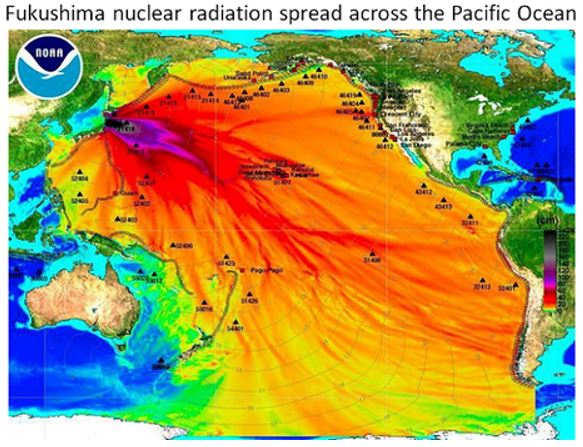 Interesting, I wanted to book a week as holiday there (SW), but will not after seeing this.. Lots of roads will be blocked, I guess flights will be altered too. And also no way you are allowed to hike up there. 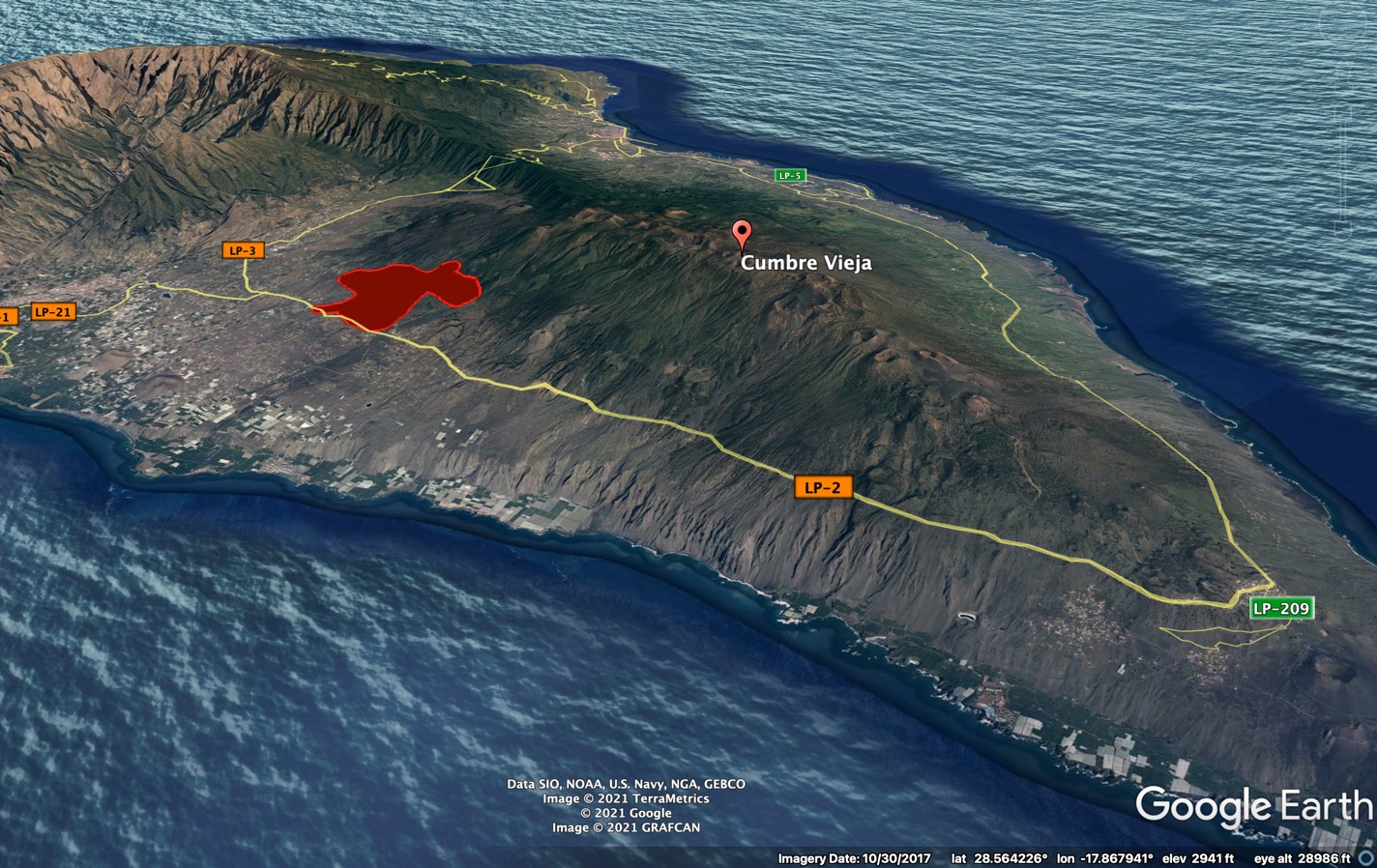 Staff member
There's sufficient twittering about this that the National Tsunami Warning Center released a statement:


Sept. 19th, 2021
There is NO tsunami danger for the U.S. East Coast at this time, following the eruption of Cumbre Vieja volcano, La Palma, Canary Islands. The National Tsunami Warning Center is monitoring this situation, and based on all available data, including nearby water level observations, there is no tsunami hazard for the U.S. East Coast.
A reminder, tsunami alerts are disseminated through National Weather Service and broadcast through official pathways including the Emergency Alert System, NOAA Weather Radio, and Wireless Emergency Alerts.

I first thought that this is already a picture from today, since there is an apparently rather new lava flow going right through an inhabited area, and there appears to be a trail of smoke where it originates.
Upon further research, I found that this is from a part of the 1949 eruptions (there were several along the ridge that year), origin is the Volcán den San Juan.

What I learned in the process:
- According to newer research, it would take a very substantial eruption combined with heavy rain to get a landslide going, seeing that the Cumbre Vieja is not yet high and steep enough to be inherently unstable
- So far, this is, as Cumbre Vieja eruptions go, a minor one.
- It was however the 1949 eruption that, according to the original researchers in 2001, resulted in the western part of the Cumbre to slide a few meters westward, thus exhibiting a sign of instability
- It would be in character for the volcano to stay active for a while (months or so) and develop more vents in other places. So keep watching, but not obsessing.

Did you check the eruptions from '71? That is also pretty cool.

It would be interesting to know if the conclusions are any different for researchers who live along the Eastern Seaboard vs. elsewhere!

Oystein said:
I first thought that this is already a picture from today, since there is an apparently rather new lava flow going right through an inhabited area, and there appears to be a trail of smoke where it originates. Upon further research, I found that this is from a part of the 1949 eruptions (there were several along the ridge that year), origin is the Volcán den San Juan
Click to expand...

(note to mick; is the comment-window new coded? cant see any tools, nor cursor and nothing besides "post reply" and "attach files", but I can type (without any tools) if I turn off scripts))
You must log in or register to reply here.