Cow and Bull - relevancy and data 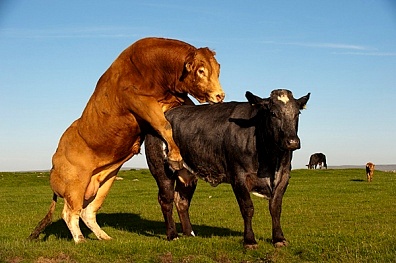 (link)
"Examsmanship and the Liberal Arts: A Study in Educational Epistemology"
by William G. Perry

Written in 1963, Perry recounts an event from the 1940s. This essay describes a Harvard student "Metzger" who....


One day in his junior year, Metzger accidentally walked into a classroom where a group of social science students was about to be tested.
Metzger was a math major, but as a lark sat down and took the exam, which demanded an essay on a book Metzger had never read.
http://www.canada.com/vancouversun/news/editorial/story.html?id=dde7f84d-1c95-45ad-90db-c86e1bf1abfa

The professor, not catching-on that Metzger was not a student enrolled in the class, reviewed his paper and graded it with an A-...... about a book that Metzger never read.

Perry analyzes Metzger's approach, which was to use the few clues available to him about the book (title, author's sir name, and the subject of the class/course) and write the exam essay with those hints alone.
The test was in parts; objective questions, and an essay.
On the questions, he did not score so high, but on the essay section...he did.

In present-day terms, he bullshitted his way through the exam.
Students with actual facts and who read the book under examination, received lesser grades.

In Perry's terms from 1963, he describes two concepts of the way we learn, and how we show it...


"It is a curious fact that there is no
academic slang for the presentation of evidence of diligence alone.
"Parroting" won't do; it is possible to "parrot" bull. I must beg the reader's pardon, and,
for reasons almost too obvious to bear, suggest "cow."
Stated as nouns, the concepts look simple enough:

(and he goes on to say....)
"When the pure concepts are translated into verbs, their complexities become
apparent in the assumptions and purposes of the students as they write:

To cow (v. intrans.) or the act of cowing:
To list data (or perform operations) without awareness of, or comment upon,
the contexts, frames of reference, or points of observation which determine the
origin, nature, and meaning of the data (or procedures). To write on the as-
sumption that "a fact is a fact." To present evidence of hard work as a substitute
for understanding, without any intent to deceive.

To bull (v. intrans.) or the act of bulling:
To discourse upon the contexts, frames of reference and points of observation
which would determine the origin, nature, and meaning of data if one had any.
To present evidence of an understanding of form in the hope that the reader
may be deceived into supposing a familiarity with content."

To me, the point of Perry's essay reveals that both cowing and bulling are necessary (when combined) to understand what's before you.
Contexts and frames of reference are needed to support "pure data".
Even though Perry's essay is in regards to academia in the Liberal Arts, the internet has become a place of voluntary "homeschooling" and information swapping between individuals. People's "academia" methods often are displayed as they set-up blogs, post in forums, and twitter away.

In my opinion regarding conspiracies, I do see a lot of "bulling" where data gets pushed to the wayside in favor of creating a story based around conjecture.
I also see "cowing", where data "facts" are held in high regard but are completely irrelevant.

There is the "convenience factor" when supporting a conspiracy theory, using cow and bull in their separate extremes....
"Cow" when postulating a single fact or circumstance so that no one can argue that it is false (even though it is not relevant).
"Bull" when there are no facts available....in order to suggest that there are -- that the context, similarities, or motives... are enough to prove something "as fact".

When the two extremes rarely meet, is when nothing can be understood or become meaningful.
~~~

Some examples...
(I'll use the chemtrail theory, but cowing and bulling can be found in nearly all unproven conspiracies)

(a cow) "Fact: there are patents describing the spraying of chemicals"
(a bull) "The gov't is secretive, and would never reveal how they spray the chemicals"

(a cow) "In the past, the gov't has sprayed chemicals on populations...true, or not true?"
(a bull) "If they did it in the past, they must be doing it now"

(a cow) "Strontium causes cancer"
(a bull) "Strontium often shows up in water and soil tests along with other harmful chemicals that just shouldn't be there. Ever heard of Agenda 21 ?"

Recently, a chemtrail believer on this forum cleverly (and unknowingly) used both in the same question...

"Do you think its right to spray people and the natural world without their knowledge, informed consent and without legislative democratically representative processes?"

(the cow) It's not right to get sprayed without consent. (everybody would agree, it's not "right") It becomes a moralistic "fact", as well as illegal.
(the bull) He is suggesting it's happening now, without consent, and people don't know about it.

We might see supporters of an unproven conspiracy state facts that are quite wrong according to science and physics. We could say, "that's not cowing, because it's not accurate data". But to them, it is actual data and correct.....they believe it to be true and factual. If anything, this is a more-pure cow, because they have not undertaken to discover the relevancies and nature of their factual beliefs.
Perry notes this in the essay when he uses the analogy...the fact taught in elementary school, "Columbus discovered America in 1492".
That learned phrase has no meaning unless the contexts and frames-of-reference are visited as well.


Perry's examples -- Is it true that Columbus discovered America for the American Indians? They all agree that he did not -- that does not make sense. Did Columbus discover America for Leif Ericson and the Scandinavians? Usually there are a few students in the class who have heard of Leif Ericson. They explain to their classmates that Columbus could not have "discovered" America for the Scandinavians.
Part of the problem here is many college students have almost no knowledge of history or geography. So at this point in the discussion, some students want to know if it is not true that Columbus discovered America in 1492. In their internet world of instant world-wide communication, they have trouble conceiving of the idea that Scandinavia did not always share what it knew with the rest of the world. Given a little history lesson, however, they understand that Western and Southern Europe did not know about the existence of continents across the ocean, so it is true that for Spain, Portugal, England, etc., Columbus truly did discover American in 1492. Whether or not a fact is true (or relevant) depends on the frame of reference within which one looks at it.
http://www.kissgrammar.org/kiss/wb/Writing/Perry_Examsmanship.html

Wow...
You must log in or register to reply here.

How to Delete Your Account and Data on Metabunk