Could start thread on geo-engineering?

I don't "believe" in chem-trails but am very concerned and involved in "global warming" research.

Chem-trails, and even contrails for that matter would be a good tool to combat increasing greenhouse gases from man-made sources causing climate change.

During the 9/11 shutdown of commercial air traffic over the US - it was shown that contrails contributed a cooling effect and that without the large amount of air traffic in the world today causing increased high level cloudiness global warming would be even more advanced.

There are ways to make the contrails more reflective and efficient in their cooling effect by adding/spraying chemicals from high altitude planes, or even in one proposal, to spray chemicals from tethered high altitude balloons which have hoses running up to them from the ground.

I'm not saying that military aircraft *are* spraying in secret, but that there would be what to many in power would think were valid reasons for doing it.

Well, let's start with your premise. You say you are involved in global warming research, in which the "consensus" IPCC view says that over the past 100 years, the instrumental record shows a 1.3 degreeF (.74C) rise.

But what is that instrumental record being based on?

I contend that the record has been so corrupted by bad data that no such rise can be tortured out of it.

prima facie:
Have a look at the quality of measurement stations used by one of the most technologically advanced nations on earth:
http://www.surfacestations.org/odd_sites.htm

This one is a classic, the MMTS is the temperature sensor:
[Broken External Image]:http://www.norcalblogs.com/watts/images/Marysville_issues1.JPG

This volunteer effort to survey all US temperature monitoring sites was undertaken because no standardized site survey existed of the instrument sites where "global warming" data was coming from. To date, they have surveyed 82% of the US network, and using NOAA's own rating system, 64% of the sites had errors equal to or greater than 2 degrees C!
See the home page for data.
http://www.surfacestations.org/

I declare that the first shot needed in the war against "Global wWarming" is to develop and install an accurate, advanced and globally connected system of surface weather monitors across the planet, land and sea. We have spent conservatively $50 billion on this already, before we go one step further, throw some 21st century technology at this booger.

It will immediately surrender and never be heard from again and we will be much better off for it.

I cede the floor to seventhseal.
S

*sigh* are you going to debunk the actuality of human caused climate change?

We have satellite data, we have ice core data, we have mud layer data.. We have glacial melting data, we have CO2 concentration data, we have collaborating recent historic data both human and in tree rings etc. And we have the strangely contested sea-level rise data and average temperature rise data.


Why do you pick on one nitty sampling site..? And the truth is that if all data collection sites are randomly inaccurate, and if they are only measuring relative temperature change.. The data is still useful.


I don't get folks who disbelieve "for the hell of it" - in most cases just to show how "plenty smart" they are.


There are even mathematical models of the global climate that fit data from other periods of historic change from far in the Earth's past where the land masses and ocean positions were completely different than now.


Yet folks complain that if we can't predict precise weather four days from now, how can we trust these models?


It's comparing apples and oranges.


It's obfuscation of the - dare I say it - "Inconvenient Truth" that man-made global warming is happening, that it *has* already gone pretty far and we can't stop it before it gets so bad that civilization as we know it will be compromised into a state of near oblivion.


So, even though I don't like the idea of geo-engineering or "chem-trail" solutions, they might be a necessary evil, especially if action is continually delayed by naysayers and willfully ignorant bystanders.


I suppose there is some other forum where debate about whether or not global warming is bunk is being argued.


I was interested in the opinions of others on global geo-engineering in efforts to ameliorate human impact on the limited systems of this finite resource that is Earth.


I'm even for sending out help messages through a SETI program.. I think global warming is that serious a problem.
K

i thought the 'contrail effect' was to slightly lower the temperature during the day due to reflection, but to increase the temperature at night due to insulation, the two results negating each other?? even so, this would only work over north america, europe and a few other narrow corridors, the rest of the planet being relatively contrail free?

seventhseal said:
Why do you pick on one nitty sampling site..? And the truth is that if all data collection sites are randomly inaccurate, and if they are only measuring relative temperature change.. The data is still useful.
Click to expand...

None of the proxies you speak of can replicate the past 100 years, and they are not empirical measurements, they are proxies.
Models do not generate empirical data.

The empirical data that is needed is simply so bad that the supposed change is dwarfed by the inaccuracy, and the inaccuracy isnt random, it is in one direction, towards an increase in temperature.

Show me even one station which has changed in a way so to make the temperature fall. You won't find one.

Don't try to obfuscate my contention by saying its just one "nitty site". I directed you to see the pie chart at the surfacestations.org which shows 64% of the stations wih the 2% error, what about the 6.2% with 5 degreeC error, and the 21% with 1 degreeC error?

The real story here is that only 8% have error less than 1 degreeC!

The whole story is that a full 90% of all surface stations are generating errors dwarfing the alleged temperature range they are seeking to measure!

What has become of the billions being spent on "global warming"? What sort of science is this?

In order to determine a temperature change of .5 degreeC one would have to be able to measure with a resolution of + or - 0.1 degrees!

I find your response weak at best.

seventhseal said:
even in one proposal, to spray chemicals from tethered high altitude balloons which have hoses running up to them from the ground.
Click to expand...

I'd be curious to see the details for this one. What would be the pump pressure, the hose weight, etc to pump chemcals up to 20 km altitude into the stratosphere. Sounds like pie-in-the-sky.
K

Jay Reynolds said:
I'd be curious to see the details for this one. What would be the pump pressure, the hose weight, etc to pump chemcals up to 20 km altitude into the stratosphere. Sounds like pie-in-the-sky.
Click to expand...

this, from one of the 'comments';

Please. Someone who is good with numbers. Correct my feeble calculations. If it takes 1bar pressure to lift a column of water 32 feet then to lift a column of water 14 miles vertically would require a pump discharge pressure at ground level of 2310 bar. That would take one hell of a pipe. And that is not allowing for the fact that the lift would not be vertical but would by necessity be angled which in itself would increase the length of the pipe. Now add pressure drop caused by friction between the fluid and the inner wall of the pipe. OK, I will concede that my calculations are based on the density of water and the 'chemicals' would probably be considerably less dense but we would still be talking about extremely high pressures to achieve the altitude. OK number crunchers. Please prove me wrong.

i particularly liked the irony in this comment... "Why not design new planes to emit sulphate particles, then we can all
fly and save the plane at the same time". 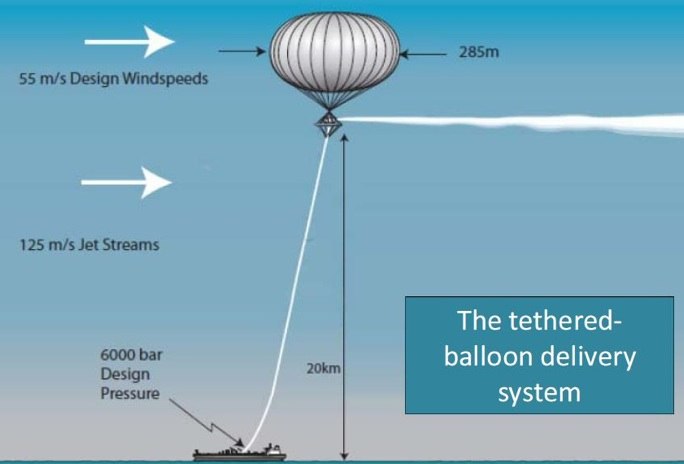 WP2:2: 1km Testbed. WP2.2 (a) will produce a pipe-balloon system to deliver a 3kg/s water plume at a height of 1km. The pumping pressure required is around 120 bar. . In the interests of evaluation the technology to 4000bar (as required for a 20km delivery system) the testbed will incorporate a pipe rated to 4000bar. A spool tensioning system will be employed to enable a simulation of ship dynamics were the pipe to be deployed at sea. Safety issues will be explored, for instance a parachute-controlled drop test. The testbed will require a substantial project management and a systems-engineering approach is required, with close collaboration with an experience engineering contractor. Testbed manufacture will only begin after input from a Public Engagement has taken place.
Click to expand...

I'm sure they have done their calculations and included a 3-4x safety factor to ensure nothing could ever go wrong.

I might suggest some sulfur hexaflouride bubbles included in the mix to use natural bouyancy to help the lift and reduce density of the mix.

When the aerated colloidal suspension of nano-zeolite gets running, it's all "drill-baby-drill' and "burn-baby-burn" up in your face.
All heavy metals and in fact all essential metals as well will be scrubbed from the earth and everyone's nutritional status will plummet.......
The population will be so mineral depleted that Monsanto can develop some new GMO frankenfoods to reestablish 'balance'
of nutrients, patented of course, so that farmers will be forced to buy their seeds every year......

When the colloidal nano-silver synergist is added to the mix 1/2 the population will be gone before they know what hit 'em.
Useless eaters................

They must be apoplectic.
You must log in or register to reply here.