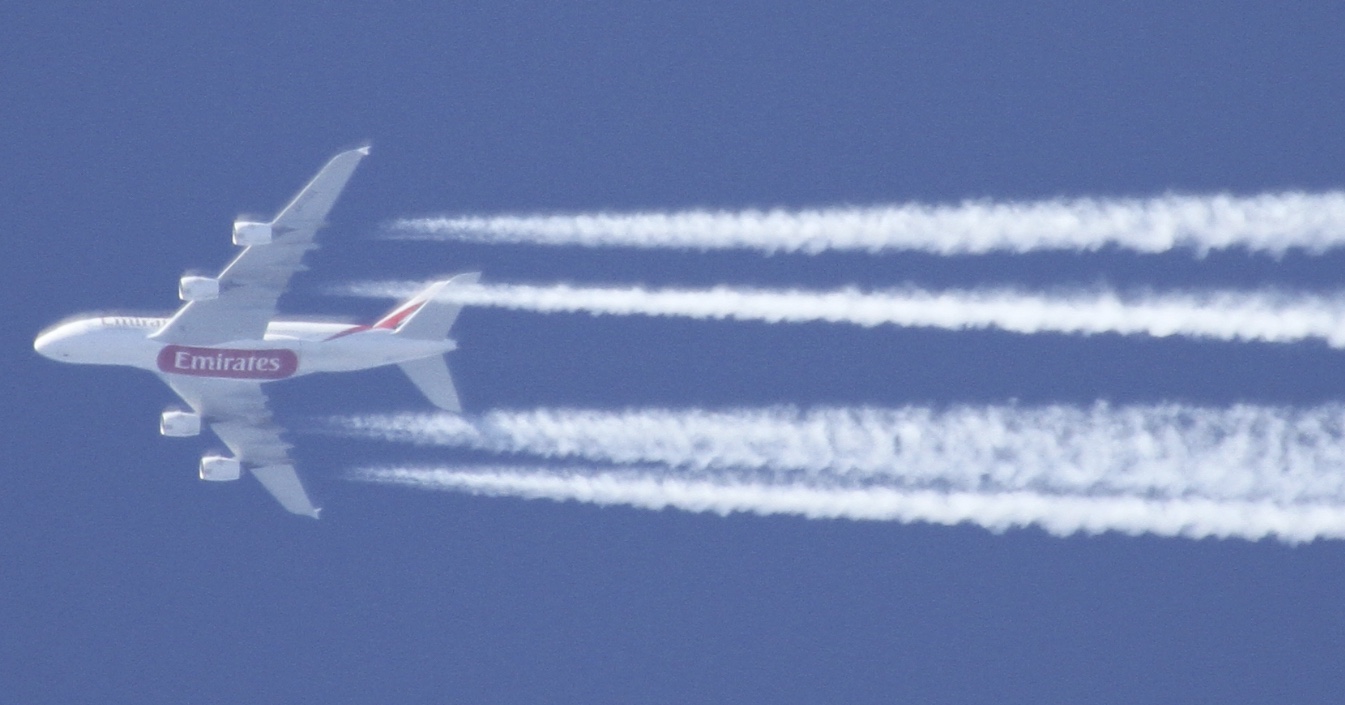 I've seen this effect on other A380 pics: the inboard starboard engine seems to produce a thicker (or sometimes double) trail. I assume it is to do with the angle we are viewing it rather than an actual difference in the trail thickness?

I think it must just be the viewing angle as this pic from the other side shows the same effect but in the port side. (Not my photo, from http://www.luchtzak.be/forums/viewtopic.php?t=43559) 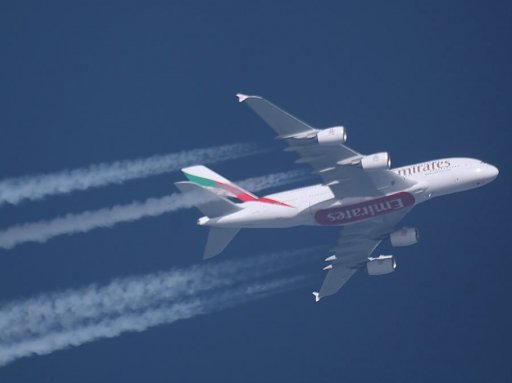 Staff member
(Split to a new thread, as it's an interesting topic)
I've noticed something very similar with all the 777's that fly over here. It's even more dramatic there with just two engines.
https://www.flickr.com/photos/metabunk/sets/72157650716043536/ 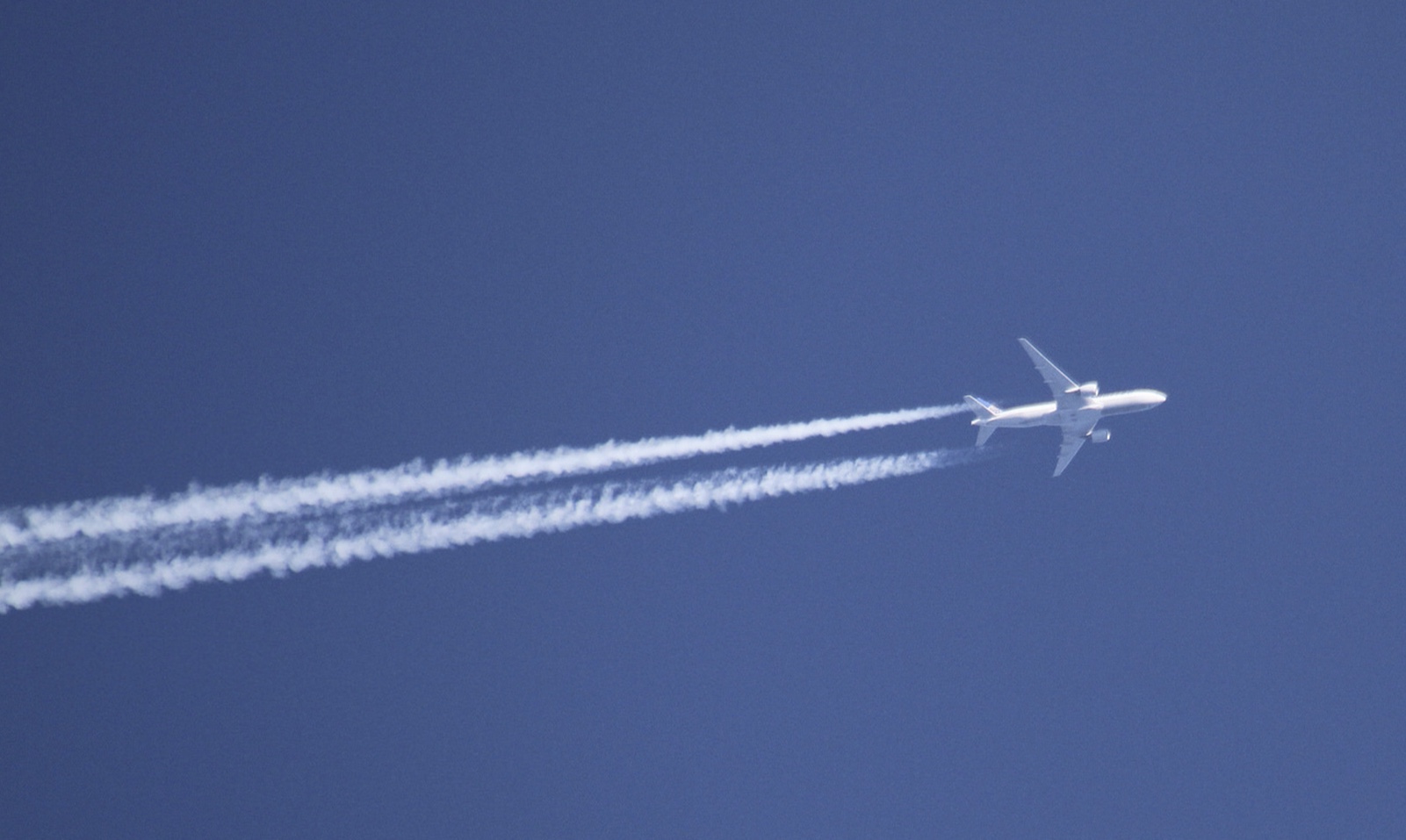 There are several possible things things that could be in play here. The dihedral of the wings (they slope upwards), and the shape of the vortex sheet which is moving and shaping the trails, and then the shape of the trails themselves, which developes vertically eventually, maybe also a little back from the wing?

The dihedral having an effect is very apparent in the A380 photos, where the near engines seem further apart than the far engines. But what effect does this have on the shape of the trails? Will it spread them outwards, with the vortex sheet being v-shaped and stretching the trails downwards and outwards?

Staff member
This classic photo shows something of what is happening: 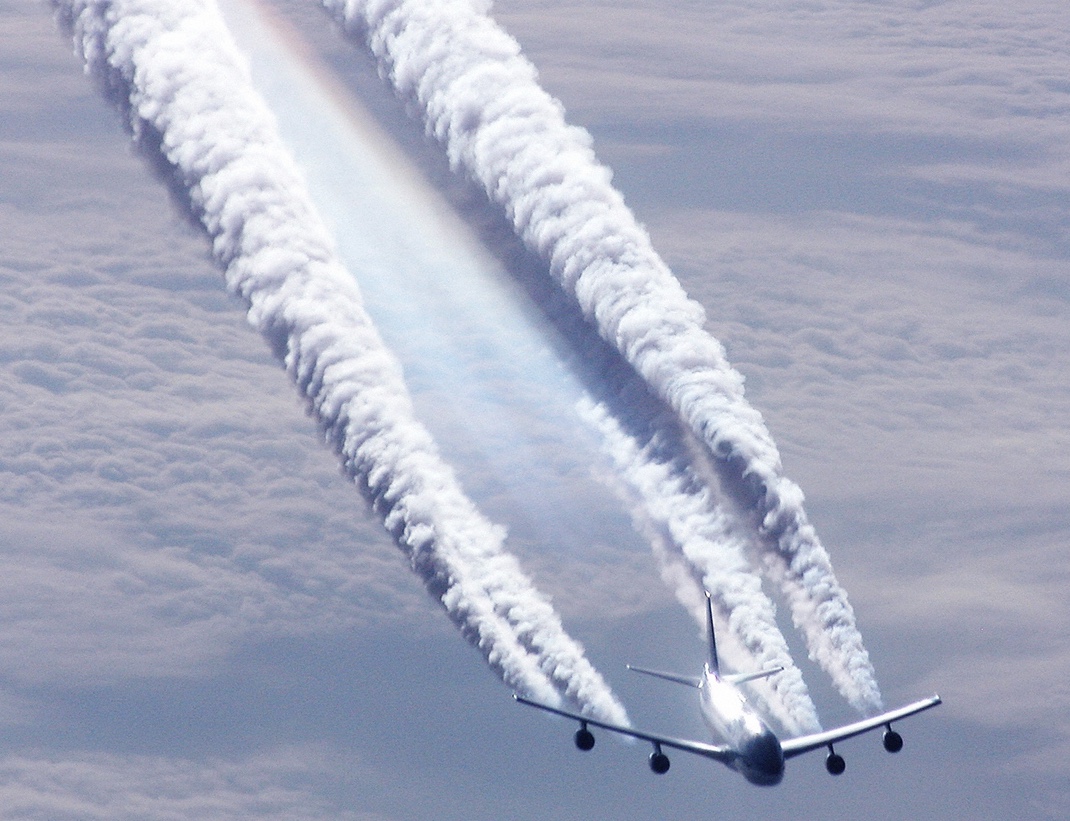 Given that the trails are identical left and right, we can see that there is quite a significant three-dimensional structure both from the dihedral, and from the curling up of the vortex sheet.

Looking that the contrail on the right in the photo, it seems like it's widening more horizontally first, and then then being curled out an upwards so from this angle it's viewed near face on, whereas the corresponding trail on the left is now viewed edge on.

Staff member
And here's a video:

Staff member
This is what I'm picturing, in a simplified "cross-section" view (showing only the trails from the inboard engines). The trails are flattened and slanted upwards and inwards, so you are seeing the one on the far side "side on" and the one on the near side "edge on". 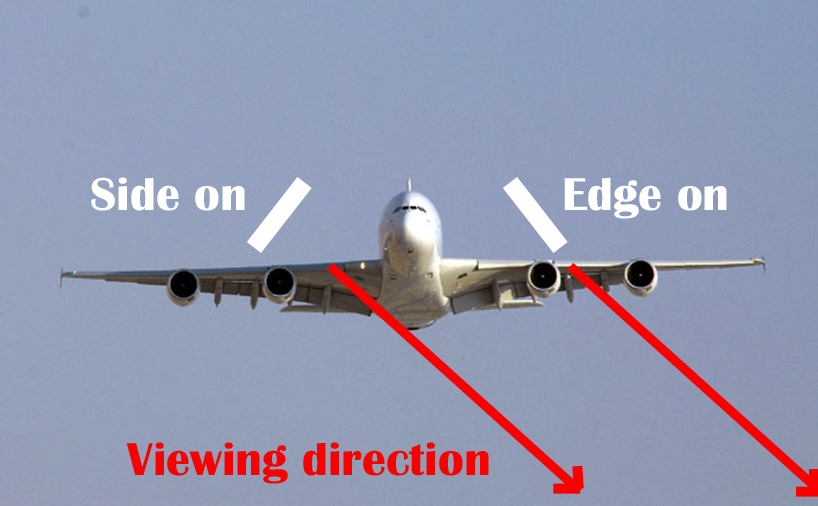 The effect is caused by viewing the plane from an angle. Photos taken from directly underneath show the contrails appearing symmetrical: 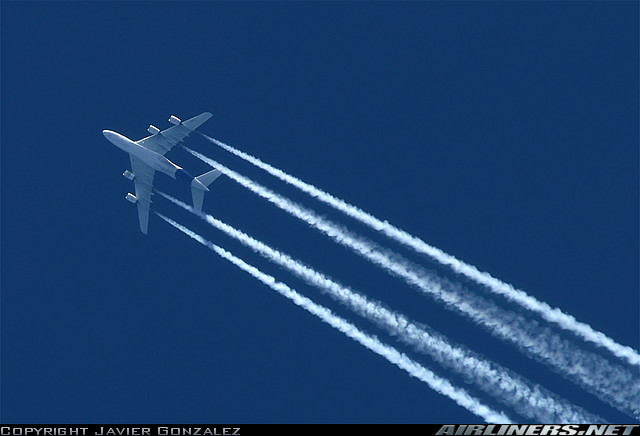 This reminded me an earlier thread:
https://www.metabunk.org/threads/hy...on-of-symmetric-and-asymmetric-contrails.929/

I still entertain the possibility of other factors contributing to apparent asymmetry of some contrails, especially when it is prominent at several plane lengths behind the plane.

I still entertain the possibility of other factors contributing to apparent asymmetry of some contrails, especially when it is prominent at several plane lengths behind the plane.
Click to expand...

Sure, but these are quite specific and consistent at a specific distance from the engine.
Last edited: Feb 15, 2015

"Symmetric" or "Assymetricity of any contrail?

As shown in this thread already....it is dependent on the angle of view. ALSO of course, the "height"....which relates to the "angle" of view as well.

In "each" instance of a video, or still photo OF a contrail?

Every time it must be considered, and understood the 'POV' or "Point of View" of the device....the "camera"...that was the means of recording, and thus "displaying" to the viewing audience.

I would only ask each and every person to consider very carefully...."POV"....every time they examine video evidence. 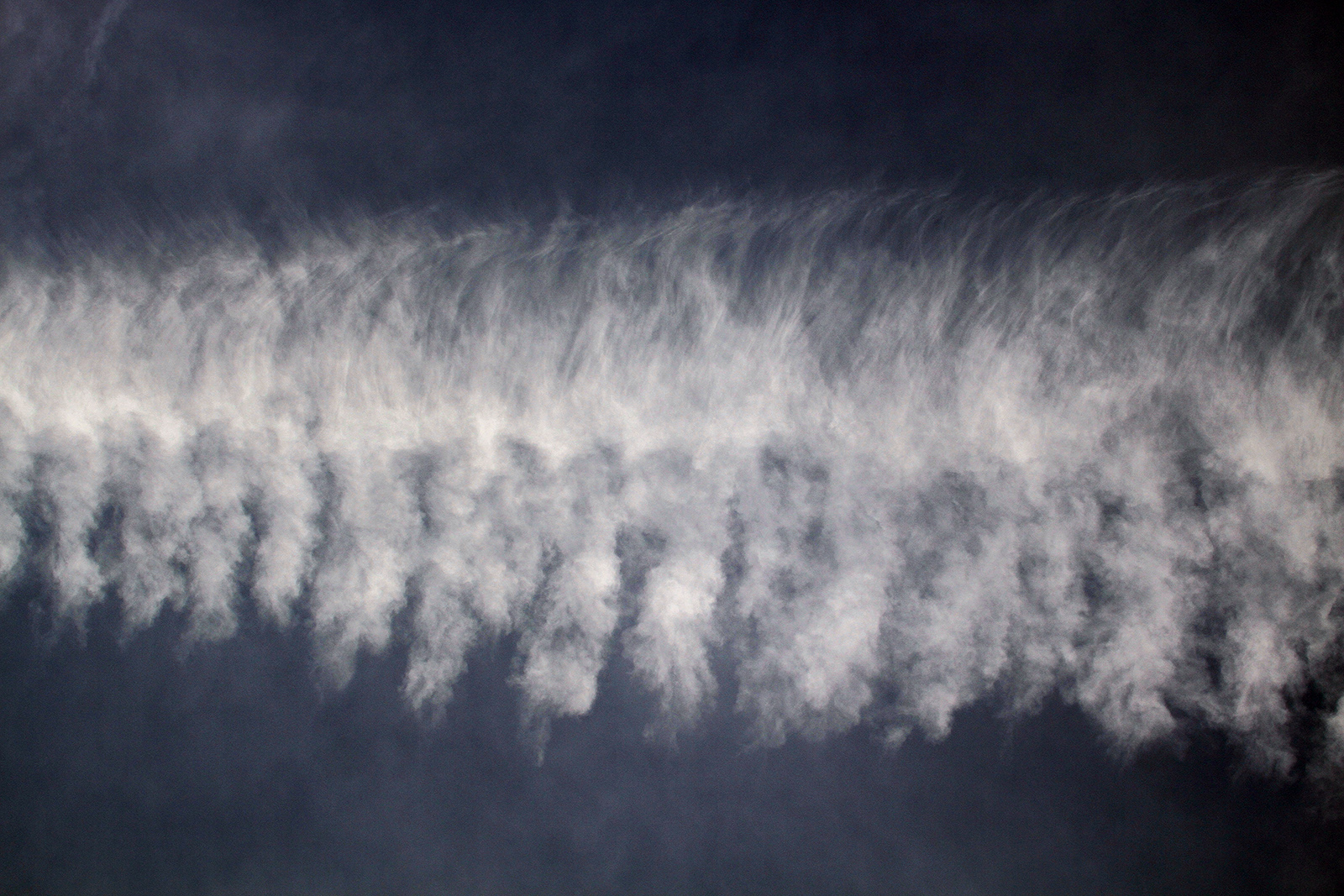 Yes, correct. Is there a way to further explain the visual appearance of that particular contrail (and of course, by 'extension', the wide variety seen in other observed contrails?). And? Can a thread (or discussion in this thread) help to further explain, and hopefully illustrate what is "invisible" to most....(since our atmosphere {the "air"} is a transparent...to our eyes...gas). Only when condensation events ("aka' clouds, etc") are formed do we Humans get a (visual) sense of the processes aloft. (Or on the ground, if we consider "fog" too....which is basically low-level stratus).

I mention this only to open a discussion about the incredible complexity and diversity of Earth's atmosphere.

Point being that in each-and-every condensation event, in the Earth's atmosphere? There can be significant variations....even sudden "shifts" in temperature/humidity conditions....(a "shear-effect", if that helps to understand).

I would wish for the audience to consider (...if they have never experienced "White-Water-Rafting" then this might not make sense.)

But....water as a fluid behaves similarly to air.....as each is a type of "fluid" (in science) and each flows. A "White-Water-Raft" experience on any particular river usually is rather "consistent" because the water is flowing over a well-defined surface....the river-bed. This means that the behavior of that water is easily understood (based on the the flow-rate OF the river, AND the substrate of the river-bed, of course.).

Over centuries, due to erosion and other geographical factors, a rivers' "Way of Flow" will change.....but usually not within one Human's lifetime.

The Earth's atmosphere, however, is VERY different when compared to a flow of water in a river channel. The fluid dynamic physics are similar of course....but the ATMOSPHERE of Earth has no physical constraints...(except I will mention some geographical physical terrain implications.....such as mountainous variations in the height of the Earth's surface....for just ONE example!).

To "summarize"? Any apparent "assemetry" in observed formed contrails can occur...merely because the Earth's atmosphere is "assymetric".
You must log in or register to reply here.