We often refer to a "conspiracy theory" of politics, where events are explained by people conspiring against other people. The term dates back to the 1950s, but interestingly around that time it was synonymous with a more colorful phrase: "devil theory". The above quote is from a Jun 21 1964 article in the Winoda Daily News titled "Barry Sets Up Scapegoat" about how Barry Goldwater was already floating conspiracy (or "devil") theories about his inevitable failure to become president. 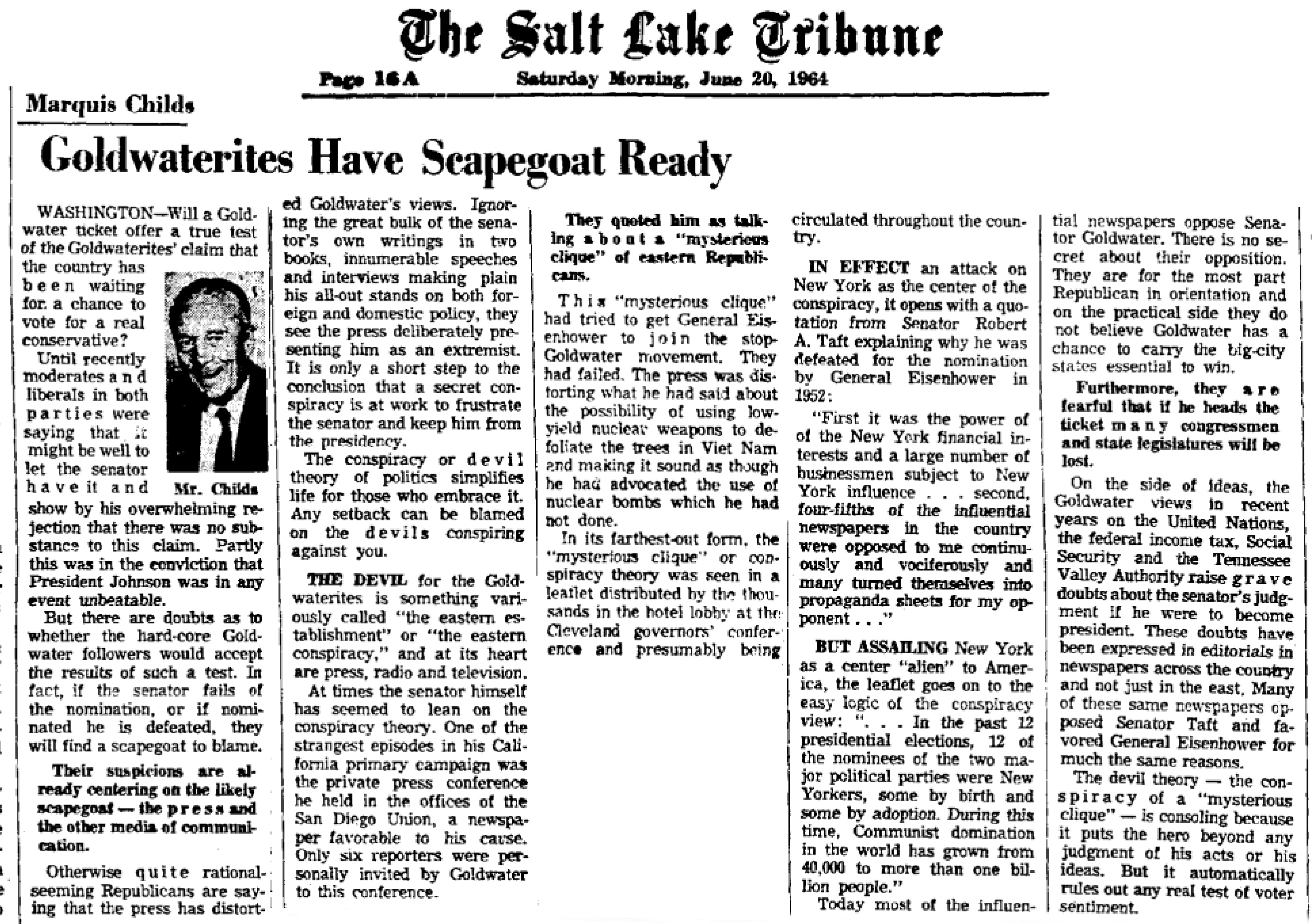 The "devil" here is not literally Satan or some supernatural being, but instead refers to some organization or group. With Goldwater it was "the Eastern establishment" or "the Eastern conspiracy". This echos more modern usages, like "a vast right wing conspiracy," or "the Deep State."

Another 1964 usage is from the book Contemporary Theory in International Relations, by Stanley Hoffman (Ed).

The origin of the phrse revolved around the book The Devil Theory of War: An Inquiry into the Nature of History and the Possibility of Keeping Out of War, by Charles A. Beard, 1936. His book is essentially a rejection of the devil/conspiracy theory of history

The phrase might have roots in "The Devil Theory of Disease" as described in this 1916 article: 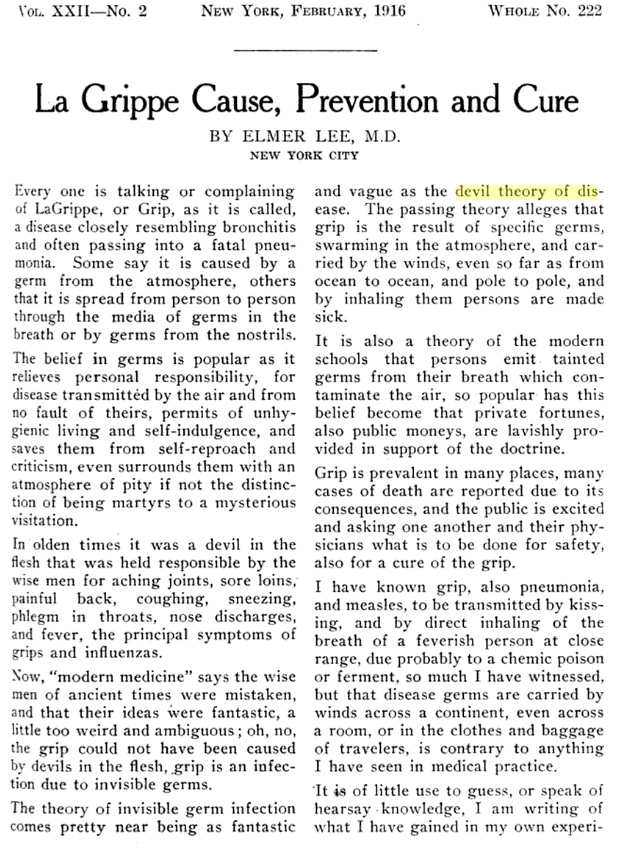 A rather odd article, seeming saying the germ theory of disease is like the devil theory, but it does reflect the sentiment of blaming ones ills on a scapegoat, and not taking "personal responsibility" (which the writer there feels means good diet and hygiene).

A similar phrase is the "devil theory of economics", which refers to a belief in evil forces or some other prime mover causing economic harm (as opposed to market forces). Again personal responsibility is emphasized, like in the 1952 version.

An even more removed usage comes from the 1872 History of Salem Witchcraft, where the author describes the "devil theory" (of the movement of a planchette on a OuiJa board) as lacking science (but does not really come up with a good alternative.)

Coming back to more modern usages, in the 1941 short story Logic of Empire by Robert A. Heinlein, the character "Doc" describes the "devil theory" as a fallacy, saying "You have attributed conditions to villainy that simply result from stupidity" (a form of "Hanlon's Razor")


" — I would say that you have fallen into the commonest fallacy of all in dealing with social and economic subjects—the devil theory"
"Huh?"
"You have attributed conditions to villainy that simply result from stupidity. Colonial slavery is nothing new; it is the invariable result of imperial expansion, the automatic result of an antiquated financial structure—"
"I pointed out the part the banks played in my book."
"No, no, no! You think bankers are scoundrels. They are not; nor are company officials, nor patrons, nor the governing classes back on Earth. Men are constrained by necessity, and then build up rationalizations to account for their acts.


In the 1970 article Devil Theories of U.S. Foreign Policy, Ernest W. Lefever does not limit the "devil theory" simply to conspiracies, but characterizes it as a search for a simple answer, a single flaw in a complex world.

Devil theories of history and politics are the offspring of curiosity and frustration. Sensitive participants and observers of the human drama want to know why events. have turned out as they have, especially when they end in disaster. Why World War I? Why the “fall” of China? Why are we “bogged down” in Vietnam? Every modern man pays lip service to the reality of multiple causation, but the very mystery and complexity of untoward events compel some people to search for the central flaw, the fatal error, the demonic force beneath the misfortune. In this quest modern man is not far removed from his primitive cousin.

Later he rather brutally criticizes the book "The Power Elite, the CIA and the Struggle for Minds" by G. William Domhoff

[Domhoff] sets out to prove that the U. S. Government and the whole country are “run by a group of very rich, cosmopolitan big businessmen with international business interests.” He calls this elite “the governing class.” In attempting to prove his central thesis ... Domhoff discredits the pluralistic explanation of American society and U. S. decision making advanced by virtually all respected writers on American politics.
...
Domhoff claims his book is “empirically based and is not “conspiratorial and paranoid.” He is wrong on both counts.
...
His failure to recognize the pluralistic character of American society and the complex decision-making process is his fatal error. He virtually ignores the American people, national elections, and the Congress in his “analysis.” His devil theory overlooks the central fact that Middle America elects the President and the Congress. No one denies that well-connected men of affairs are influential, but they hardly have veto power over the President, the Congress, or the Supreme Court, to say nothing of the executive bureaucracy. He also overlooks the increasing role of various minority and special-interest groups in domestic and foreign policy decisions. He plays down the considerable diversity, reflecting conflicts of interest, within the “power elite” and the “governing class.” Domhoff and all other devil theorists suffer from the same sins. They are bewitched by the illusion of a simple answer to human misery and tragedy.

More recently again, the term "devil theory" was used synonymously with "conspiracy theory", and contrasted with incompetence, in the 1987 NSA article, "Every Cryptologist Should Know About Pearl Harbor "


A whole school, called "revisionism," grew up around the Pearl Harbor hearings. The leading revisionist was Charles Tansill, chairman of the history department at Georgetown University. In Back Door to War (1953) he propounded a conspiracy theory, which went much farther than Morgenstern's. Incompetence was too mild a term - there had been something sinister in Roosevelt's studied lack of attention to the warnings conveyed in the coded Japanese messages.
...
Tansill had concocted a "devil theory": Roosevelt deliberately withheld information from Hawaii to insure that the attack would lead to war. He wanted war, wrote Tansill, to protect the British Empire, which had been the primary aim of American foreign policy since 1900. To insure this, he had to enlist Marshall, Stark, Stimson, Knox and others in a conspiracy of silence. No longer did historians have to content themselves with diplomatic failure and military incompetence - Tansill had found outright conspiracy

L
Is there an updated or expanded version of the conspiracy theory spectrum?