Some posts claiming Clinton team has manipulated a picture to show higher crowd numbers at a recent Ohio rally. I'd suggest a predictable ruse by trump chaps to under mine clinton credibility.
https://www.facebook.com/photo.php?fbid=360565817620296&set=gm.1135044179912669&type=3&theater


Pretty bad when a rally photo is manipulated to increase the crowd size. Notice the circled head is all the same person 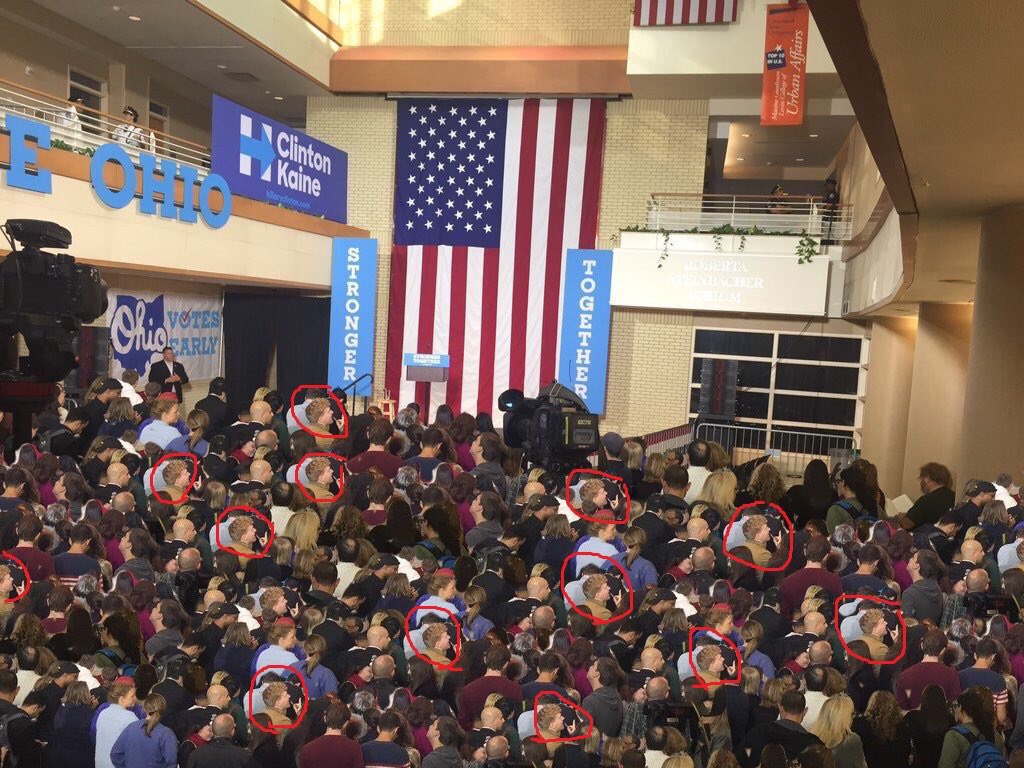 Yet here is the original picture and so more than a heads been worked in, a full crowd as well 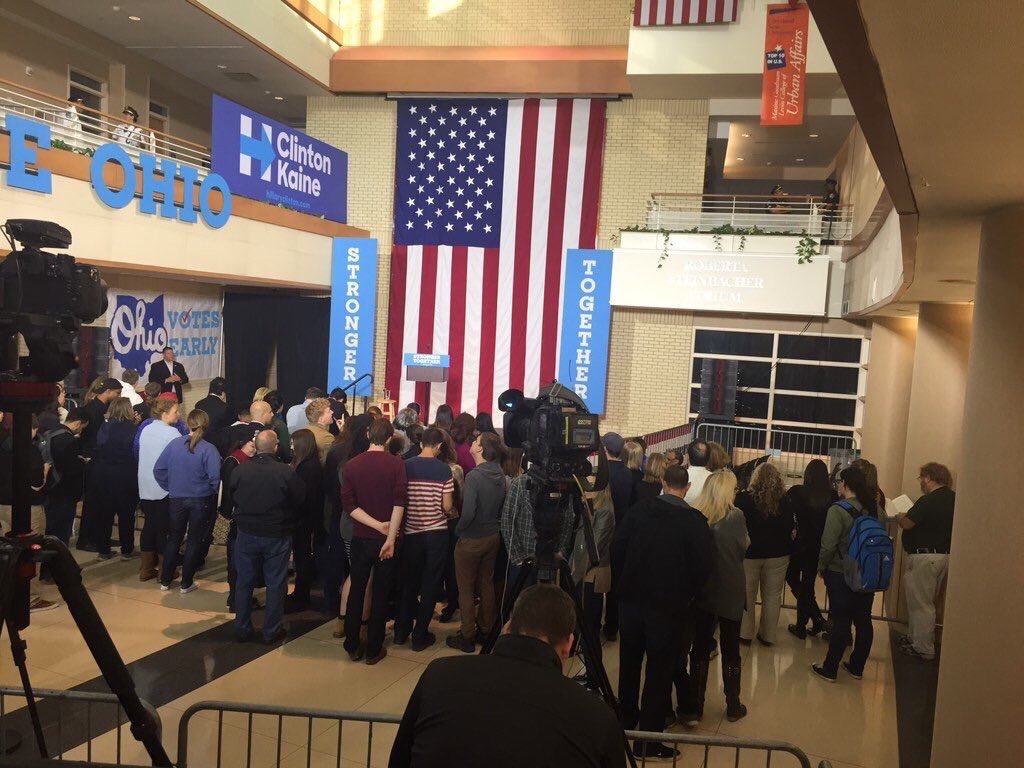 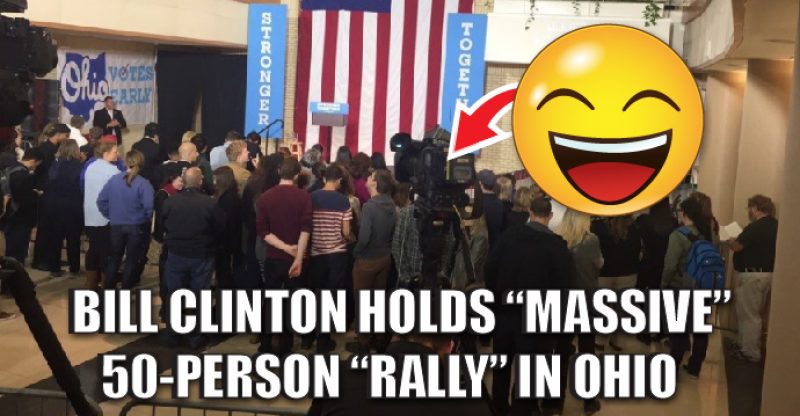 There is no real surprise about all this, i suggest both sides are guilty of willful or mistaken use of pictures to show a better face but what i like to be able to find or show is

1. the original pictures date and time stamp
2. the primary source of the manipulated picture who 1st posted it
When i right click picture inspect it give lots of information and data but im unclear how to best interpret or search though this

Staff member
Here's a thumbnail of a video stream from the same event (can't find the actual video). It's from the UK Sky news, so would be in BST on that day. Looks like 16:05 BST, which would be 11:05 AM in Ohio. 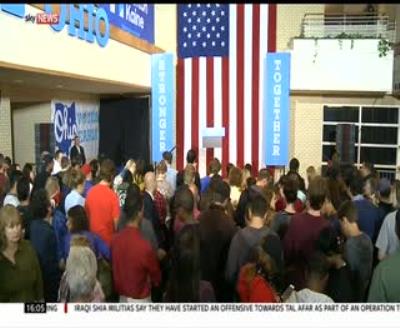 Clearly in neither photos is Clinton actually there. However the crowd in this photo looks more like the actual one while he is speaking 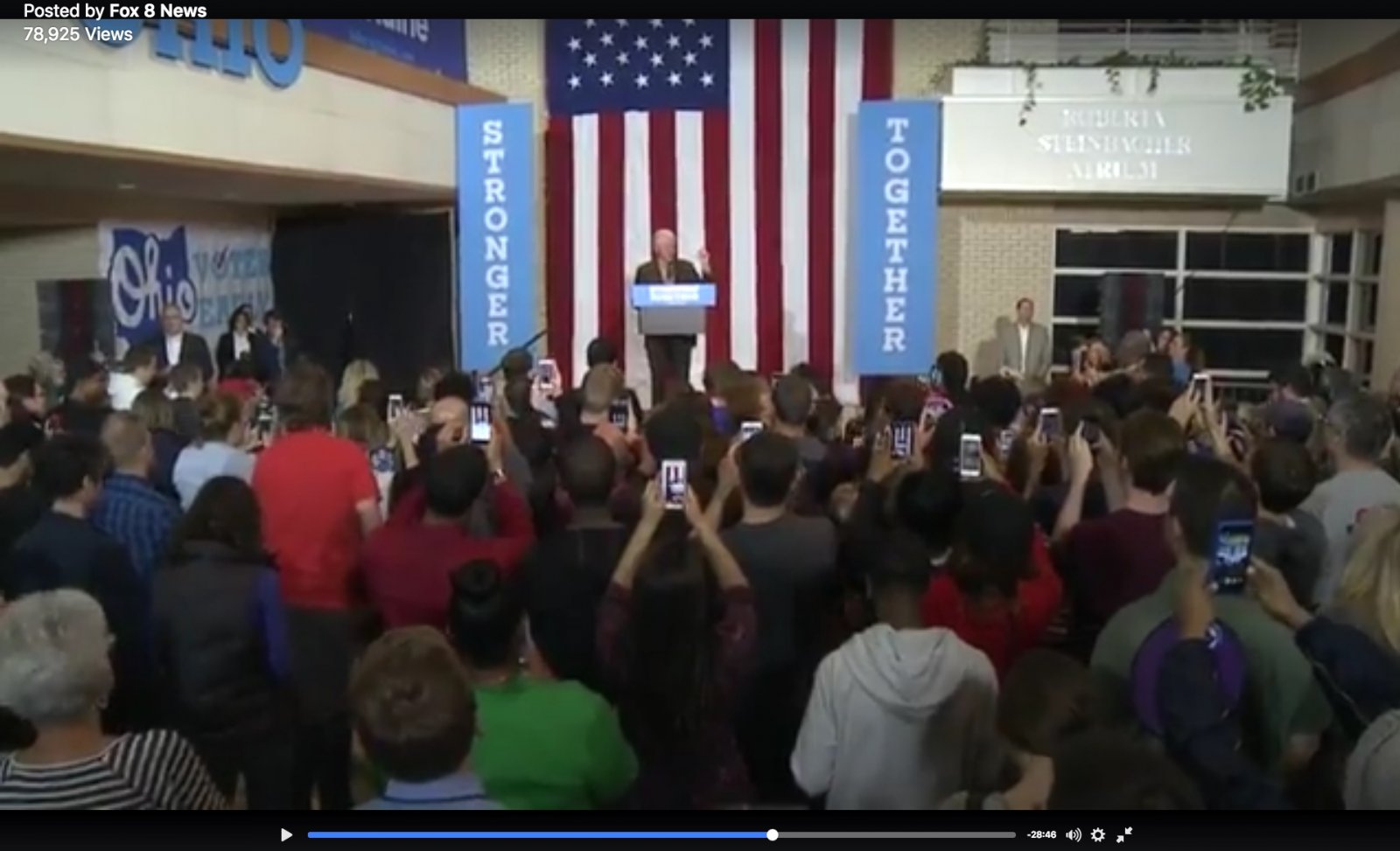 This was an early voter rally at Cleveland State University, Oct. 29, Bill Clinton was speaking. Bill's not behind the podium, so I'm not sure how large the crowd actually got. I haven't seen either official camp trying to use the photo and as far as I can find the rally only got a little local coverage.

Clinton, who spoke at the Roberta Steinbacher Atrium, was in town for an early vote event, ahead of another engagement in Columbus Saturday afternoon.

There is a video that centers on Bill in that link, doesn't show much of the crowd.
Last edited: Oct 31, 2016

derwoodii said:
the primary source of the manipulated picture who 1st posted it
Click to expand...

Fb isnt the orignal. found a site where first comment was 6:44 am Oct 30th.

But since even his own readers are asking him for a MSM link -with no response from uploader- i dont really see the point in advertising his site. It is so badly done, it's gotta be a joke.

But it reminds me of a real one.

The "Dubya" campaign got caught doing exactly this in their
"Whatever It Takes" commercial in'04. 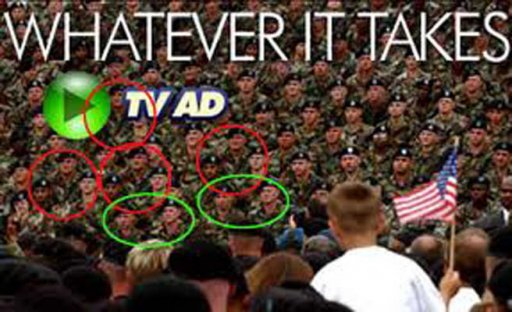 When caught, the Bush people just called it an innocent mistake, and the media let it go...

NoParty said:
But it reminds me of a real one.
Click to expand... 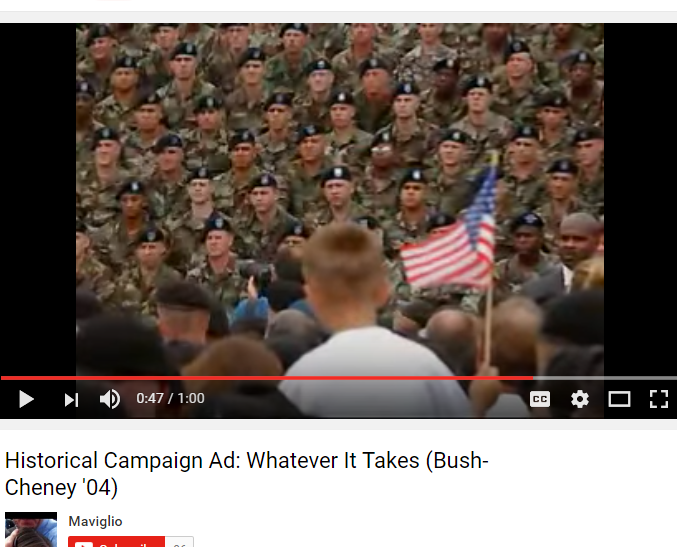 Snopes had a look at this one recently


While this image was created as a joke, it eventually started circulating along with the claim that it was created by the Clinton campaign and that the "mainstream media" was attempting to pass it off as real to garner support for the Democratic candidate:

They conclude that 4chan was the origin for the image. 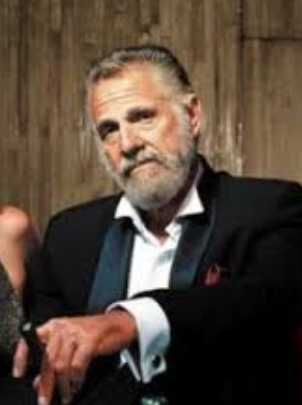 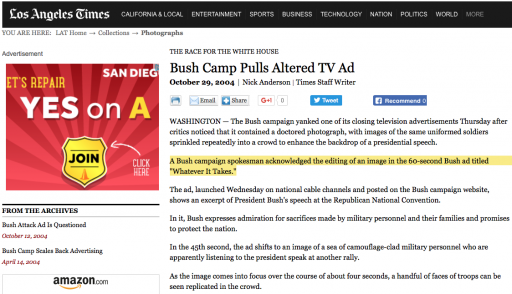 thanks all the source & timeline has been found, those meddling kids at 4chan strike again. can i ask did anyone work out how to interrogate a pictures element or properties? i read tho here but yet to discover how to find a pictures origin- date.. its probably within but a bit confronting for my less than boffin computer code skills..


Our "Field Guide" provides a valuable resource for photo metadata users. It lists and defines the most commonly used fields in key metadata schema and in popular software


Date Created [IPTC Core]
Use this field to record the calendar date (and optionally, the time) when the photograph was made - not the date when you scanned or edited the image. If using a digital camera set to the correct time, you can find this information in the image's EXIF data. If no time is given, the value should default to 00:00:00.
Note: This field is “shared” with the “Date Created” field in the Origin panel of the Adobe Photoshop File Info dialogue. You can use the Origin panel’s “Today" button to set the IPTC Date Created field.

i looked but could not find EXIF file or thread

derwoodii said:
thanks all the source & timeline has been found
Click to expand...

i dont see a definite source. the source i found which was uploaded

i realized from "view source" has a twitter link address

so i went to his twitter feed and see he retweeted this dated Oct. 29th 9:36 Pacific time, which would be October 30th 12:36 am, yes?
so unless i'm mistaken that is earlier by quite a bit than that channel 4 link. (although timestamps confuse me so i could be missing something...check my math)
Source: https://twitter.com/Cernovich/status/792585920675401728 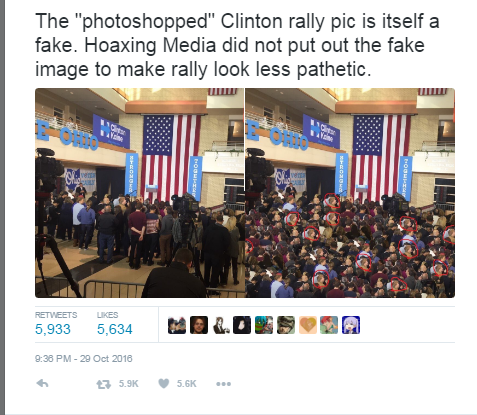 As far as EXIF data, there are extensions or website you can use but not every pic comes with EXIF data attached.

NoParty said:
But it reminds me of a real one.

The "Dubya" campaign got caught doing exactly this in their
"Whatever It Takes" commercial in'04.

When caught, the Bush people just called it an innocent mistake, and the media let it go...
Click to expand...

Not really comparable. Yes, it was a faked image, but it wasn't done to exaggerate the size of the crowd. As the article @NoParty linked to said, it was done to remove Bush and his lectern from the scene.

Auldy said:
Snopes had a look at this one recently


While this image was created as a joke, it eventually started circulating along with the claim that it was created by the Clinton campaign and that the "mainstream media" was attempting to pass it off as real to garner support for the Democratic candidate:

They conclude that 4chan was the origin for the image.
Click to expand...


It's also noticeable how just about all the replies to that tweet are missing the point, and still assuming the doctored image was actually posted "officially".

The first comment on the blog site deirdre found is dated at 06:44 on Oct 30. I don't know what time zone that is, but it would have to be GMT -14 in order to be later than the 4chan post. The latest timezone in the word is GMT -12, so no dice.

Broken link so as not to boost the site's ranking: www. theburningplatform. com/2016/10/30/msm-faking-hillary-rally-size-i-guess-size-does-matter/
Last edited: Nov 1, 2016

Trailblazer said:
Not really comparable. Yes, it was a faked image, but it wasn't done to exaggerate the size of the crowd. As the article @NoParty linked to said, it was done to remove Bush and his lectern from the scene.

Not comparable?
Hmm. It's certainly minor, but my point was that I see the humor of a (false) charge of digitally
editing an image against one [D] team, when the other team [R] has actually admitted doing it.

Intent is a separate issue. Maybe I'm a bit jaded
--from overexposure to the polarization of American politics--
but if the Obama administration had been caught manipulating images for a campaign commercial,
I don't envision his political enemies giving two damns about "intent." Just my 2 cents.

i'd be surpised if Republicans went out of their way to highlight that Obama REMOVED himself from a photo in order to highlight the military members. And at least "W" didn't try to pass himself off as a black man like Jeb did.
And he didnt forget to whiten his teeth like McCain did


Markos Moulitsas, who runs the Daily Kos, one of the most popular political blogs out there, understands that this is a problem. “Design is obviously important,” he says. A politician’s website “is a marble lobby to who they are as a person. They need to spend money on it.” As Moulitsas points out, aesthetic considerations need to include good photography. “Hire a professional photographer!” he says. “A politician needs to connect with people, and really good photography humanizes them.”

Again, the Obama camp obviously understands this, as evidenced by the well-lit, black-and-white photo of a relaxed Obama that greets visitors to the candidate’s site. Practically everywhere you turn on the site, you can find Obama looking presidential. The team behind McCain’s website, on the other hand, didn’t seem to comprehend the importance of good photog-raphy at first. On the same day in June when I talked to Moulitsas (a vocal progressive), he was taking McCain’s web team to task for using an unflattering picture of the Republican nominee. “I opened the photo in Photoshop, took the eyedropper tool, and sampled the color of his teeth. They were clearly yellow! I’m not a design guy, and even I know how to figure that out.” http://www.printmag.com/article/desktop_click_to_run/

is channel 4 in GMT? because the snopes screenshot says 15:25

but when i open the link to the archived page it says 20:25. wouldnt a GMT time always stay the same?

the "BP" site says (under donations) he's in Pennsylvania.

Trailblazer said:
Broken link so as not to boost the site's ranking:
Click to expand...

You don't need to do that, links are automatically flagged so search engines will not follow them.
You must log in or register to reply here.

Jul 31, 2022
TinFoilHat
T
U
The UAP Policy and Discursive Shift - Changing narratives on UAPs and its effect on policy.