A new article on a 'Carnicom Institute' site tries to make the case that samples sent to CC from all over the world are not threads made by ballooning spiders. However, on first glance the only indication for this is that they look a bit different when compared to self-collected spider webs under a microscope. No chemical analysis provided so far.

Screenshot from the article: 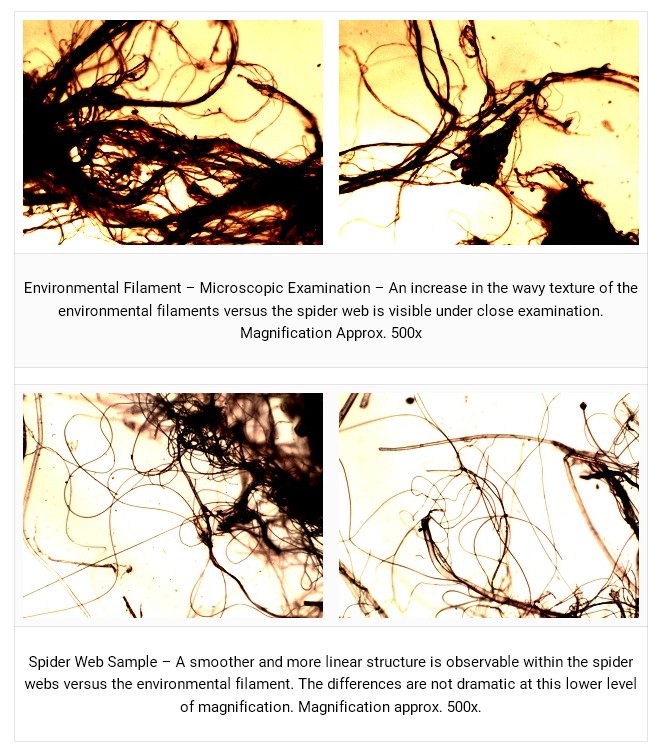 Quote from the article:


The samples examined by this researcher are NOT spider webs. All direct examinations demonstrate that they are of an unusual or artificial origin and of a complex chemical and biological nature. No spiders accompany the samples that have been received. Ironically enough, the filaments do indeed share some physical and chemical characteristics with actual spider webs, but this mimicry will hold only at a superficial level. Mainstream science reports recently announce to us that the creation of completely artificial spider webs is now commercially in place; realistically, we should not ignore the covert world of material science development along that path to public disclosure. The internal composition of the filaments differs dramatically from spider webs, and it is here that the truth will be found.

The occasion for that article seems to have been a recent ballooning event reported by Terry Lawton from Wexford. See post #15 for details about this video.

It is not very obvious from the images on the site that there is an optical difference between the 'normal' spider webs and the 'filament' sample. However, even if it were - there are significant differences between threads in a normal spider web and the threads used for 'ballooning'

Ballooning threads consist only of a certain type of silk, produced by the so called ampullate glands (the majority of spiders has several different types of silk glands). The ampullate silk is also used as a 'life line' (constantly attached during movement) and for 'bridging' (connecting wide gaps with wind support). In webs, it appears only in the 'framework'. One important property is that it is less sticky than silk from other glands.

Consequently, it is to be expected that the micro-optical properties of threads from a collected web and 'balloon' threads are different - even if they came from the same species of spider.

In this case however, neither of the species producing the samples is known in the first place, so the comparison does not make much scientific sense at all.

Major ampullate, or 'dragline', silk is the best known type of spider silk and is produced by both sexes and at all life stages. Major ampullate silk is used as a lifeline by most spiders moving through the environment (Osaki, 1996) and forms the backbones of most webs (Blackledge et al., 2009c; Coddington, 1989; Fig. 9). It is also used for dispersal by ballooning (Bell et al., 2005; Suter, 1991).

The specific chapter of the book is available (but probably unintentional, as it's not free):
http://ezlab.zrc-sazu.si/uploads/2011/10/Blackledgeal2011_Review-OrbWebs.pdf

[appended with information from the following posts]

JFDee said:
Mainstream science reports recently announce to us that the creation of completely artificial spider webs is now commercially in place
Click to expand...

Yes, it is, although producing it in bulk is still a challenge.

But can Clifford (or anyone) explain what anyone would gain by scattering miles and miles of expensive artificial silk all over a cornfield in Ireland where it is only encountered by (literally) one man and his dog?

Trailblazer said:
Yes, it is, although producing it in bulk is still a challenge.

But can Clifford (or anyone) explain what anyone would gain by scattering miles and miles of expensive artificial silk all over a cornfield in Ireland where it is only encountered by (literally) one man and his dog?
Click to expand...


In other news, I can't find anything on what type of silk that spiders use for flying. Plenty on the types they produce and what they are used for but nothing about the type for flying

Trailblazer said:
But can Clifford (or anyone) explain what anyone would gain by scattering miles and miles of expensive artificial silk all over a cornfield in Ireland where it is only encountered by (literally) one man and his dog?
Click to expand...

That's just the warm-up. Wait till it gets released across the entire planet.

The following is the original video from Terry Lawton in Ireland. He repeatedly claims that they are not spider webs and claims to have contacted two independent laboratories. 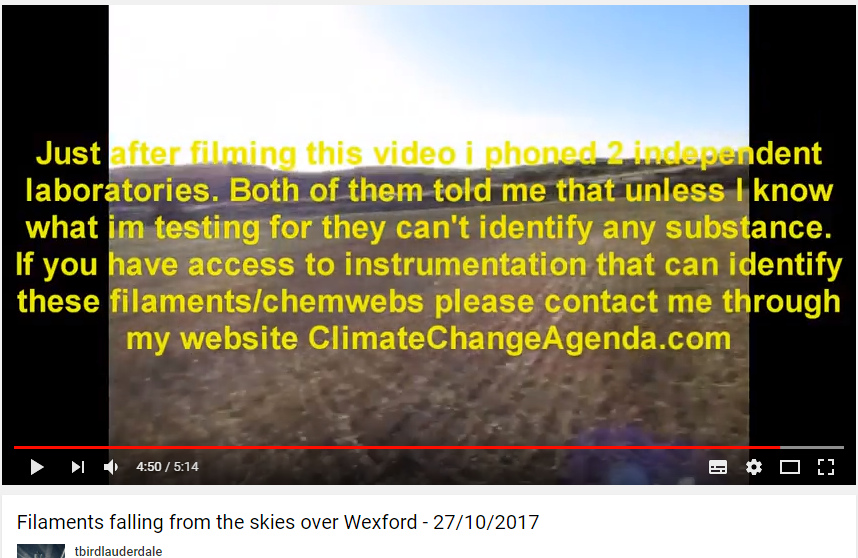 Emboldened by the Clifford Carnicom's "analysis" he has produced an updated video.

Nothing really to see in the video. Just Terry reading out the article from the Carnicom website and then linking it to his chemtrail and nano theories.


You Tuber conspiracy theorist RichieFromBoston has also been sent samples of the spider webs and is awaiting to hear back from his "friend in the science field".

Carnicom, near end of article.....


The case that the “environmental filaments” are NOT “spider webs” is unequivocal and indisputable at this point of analysis.
It is sufficient to end this report at this time. I will, however, add some additional comments at a later point.

So, pictures only ?
Yes, that is enough for most people that take his site seriously.

I wonder why it's been 20 years to do a proper chemical, biological, and physical analysis on the collected/donated samples..... and still not done ?


The Institute desires to complete a thorough scientific analysis of this material, including chemical and biological composition in detail. However, these tests will require additional sophisticated equipment, methods, resources, supplies, and trained personnel at cost.
(and)
This project is dependent upon public funding for its conduct and completion. The success and future progress of this endeavor are completely dependent upon your involvement and donations. Currently, our limited resources prevent us from reporting the specific analysis of any one sample. This is a very important study that affects all of us.

So is it funding issue ? ...or an issue that any undisclosed results from outside testing were not to their liking ?
Carnicom doesn't mention this (that I could find).
Back in 2000 they sent samples to two EPA labs, and Carnicom says the samples took around a year to be returned, untested. Carnicom seems to imply this delay and refusal to test, was significant.

The material has a long history of study, beginning with the failure of the U.S. Environmental Protection Agency (EPA) to identify an early sample sent to that agency in the year 2000.

But the EPA responses were clear..... 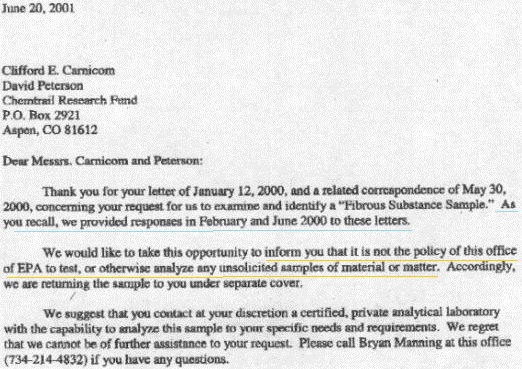 Kinda looks like that he couldn't get it done for free, and so far, hasn't sought alternate means in ~20 years.

Staff member
For those unfamiliar with this topic, there's quite a bit of discussion here:
https://www.metabunk.org/debunked-chemwebs-mysterious-fibers-fall-from-sky-ballooning-spiders.t287/

Carnicom never actually does lab tests because he does not trust labs. He invents his own tests instead.
You must log in or register to reply here.