Claim: The IPCC fudged their data in their second assessment report

Hi everyone! It appears that the well known and reputable source of scientific information that is The Epoch Times claims that the IPCC has altered their Second Assessment Report (SAR) after it has gone through peer review. To quote them:

Before the IPCC released its 1995 Second Assessment Report, world-renowned physicist Frederick Seitz obtained a copy. Seitz later discovered that the final report was not the same version that contributing scientists had approved. All statements expressing uncertainty about the effects of human activity on climate change had been deleted.

Seitz’s article in The Wall Street Journal stated, “In my more than 60 years as a member of the American scientific community, including service as president of both the National Academy of Sciences and the American Physical Society, I have never witnessed a more disturbing corruption of the peer-review process than the events that led to this IPCC report.”

The deleted statements included the following:

Their source comes from this WSJ article that Seitz wrote, with the following screenshot showing his postulations: 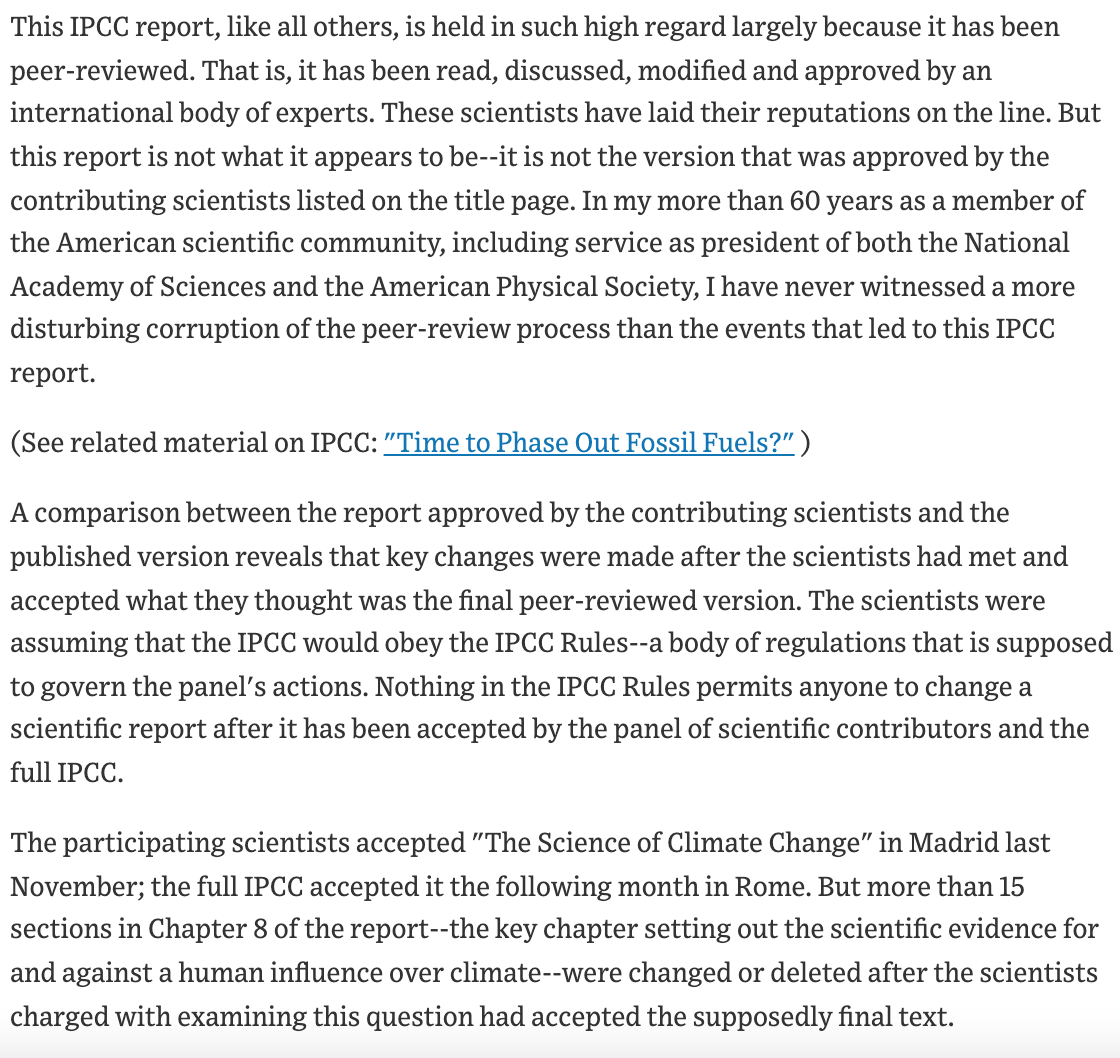 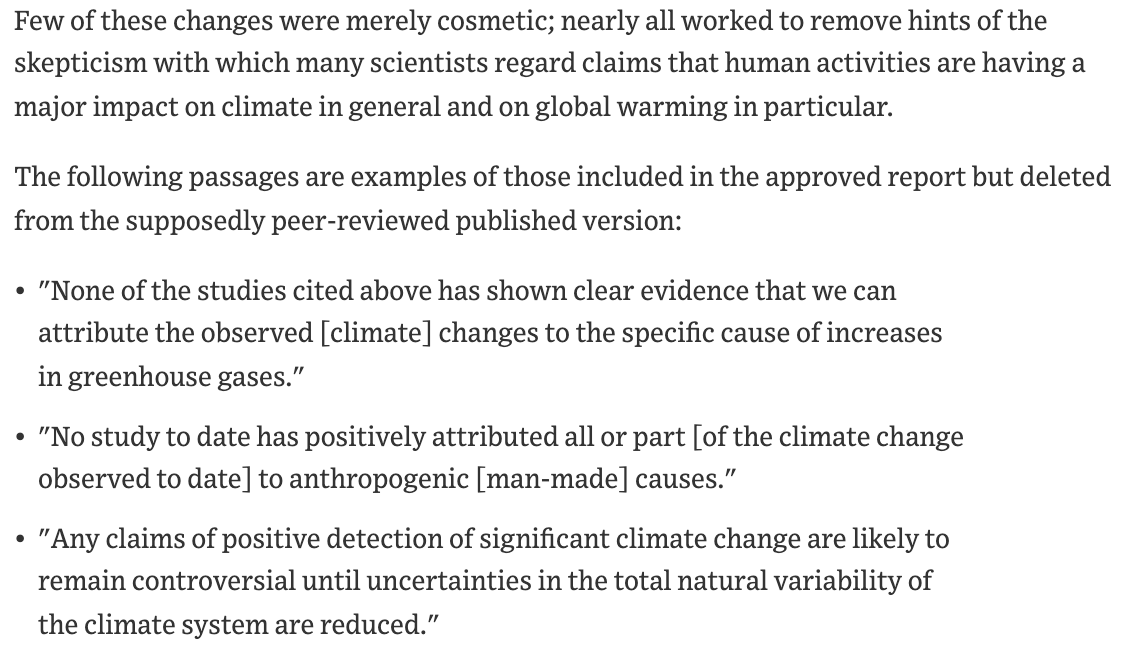 ''But how could this be anything other than a scientific fraud?'' you may ask. The answer lies in the response letter to Seitz' article written by the lead author of Chapter 8, Benjamin Santer.

Seitz first claims that changes have been made to the report after it has been finalised and accepted by the scientists in the Madrid meeting, and by the IPCC in the Rome meeting, and that the IPCC procedure forbids such changes. But a quick rebuttal from the scientists who did work on the IPCC report, namely from IPCC chairman Bert Bolin, puts his postulation to rest:

The crucial error in Mr Seitz's article -which could have been avoided if he had simply taken the time to familiarize himself with IPCC rules of procedure- is his assumption that the version of the IPCC report from which he quotes was the final version approved by the scientific authors and accepted by the IPCC. This is not the case. He quotes from the draft version of October 1995, which was sent out to delegates in preparation for the November 1995 Plenary Meeting which was held in Madrid. The final version is the one which was modified in accordance with the guidance received at the Madrid meeting and which has now been published.
Click to expand...

So Seitz was not quoting from the approved report as he claims, but from a draft published before the Madrid meeting where the IPCC scientists allegedly approved of the report. Moreover, the quotes in question by Seitz were actually removed in accordance with the recommendations from Madrid. Bolin also notes that additional comments from government delegates and the scientists at the meeting actually recommended that the report be modified after the meeting:

In the weeks before the Madrid meeting, many additional review comments on the October draft were received. For instance, the United States government in submitting their points for review, commented on 'several inconsistencies' and stated 'it is essential that the chapters not be finalized prior to the completion of the discussions at the IPCC Plenary in Madrid, and that the chapter authors be prevailed upon to modify their text in an appropriate manner following discussion in Madrid.'

A substantial part of the Madrid meeting was devoted to scientific presentation and discussion regarding the extent to which anthropogenic climate change has been detected in climate observations. Further review comments from experts and government delegates were received and the Lead Authors were formally asked to consider modifications for improvement.
Click to expand...

The changes made after the Madrid IPCC meeting in November 1995 were in response to written review comments received in October and November 1995 from governments, individual scientists, and non-governmental organizations. They were also in response to comments made by governments and non-governmental organizations during plenary sessions of the Madrid meeting. IPCC procedures required changes in response to these comments, in order to produce the best-possible and most clearly explained assessment of the science.
Click to expand...

Santer not only notes that the draft version and the finalised version came to the same conclusion that the evidence indicates anthropogenic climate change, but that the delegates at Madrid also endorsed the statement:

Mr. Seitz claims that the scientific content of Chapter 8 was altered by the changes made to it after the Madrid IPCC meeting. This is incorrect. The present version of Chapter 8, in its Executive Summary, draws precisely the same "bottom-line" conclusion as the original Oct. 9th version of the chapter--"Taken together, these results point towards a human influence on climate." A statement conveying the same message was endorsed unanimously by the governments of the 96 IPCC countries represented at the Madrid meeting.
Click to expand...

So all in all, here is a basic summary of the validity of Seitz's allegations:
That aside, the WSJ has republished Bolin's letter, but with most of it missing: 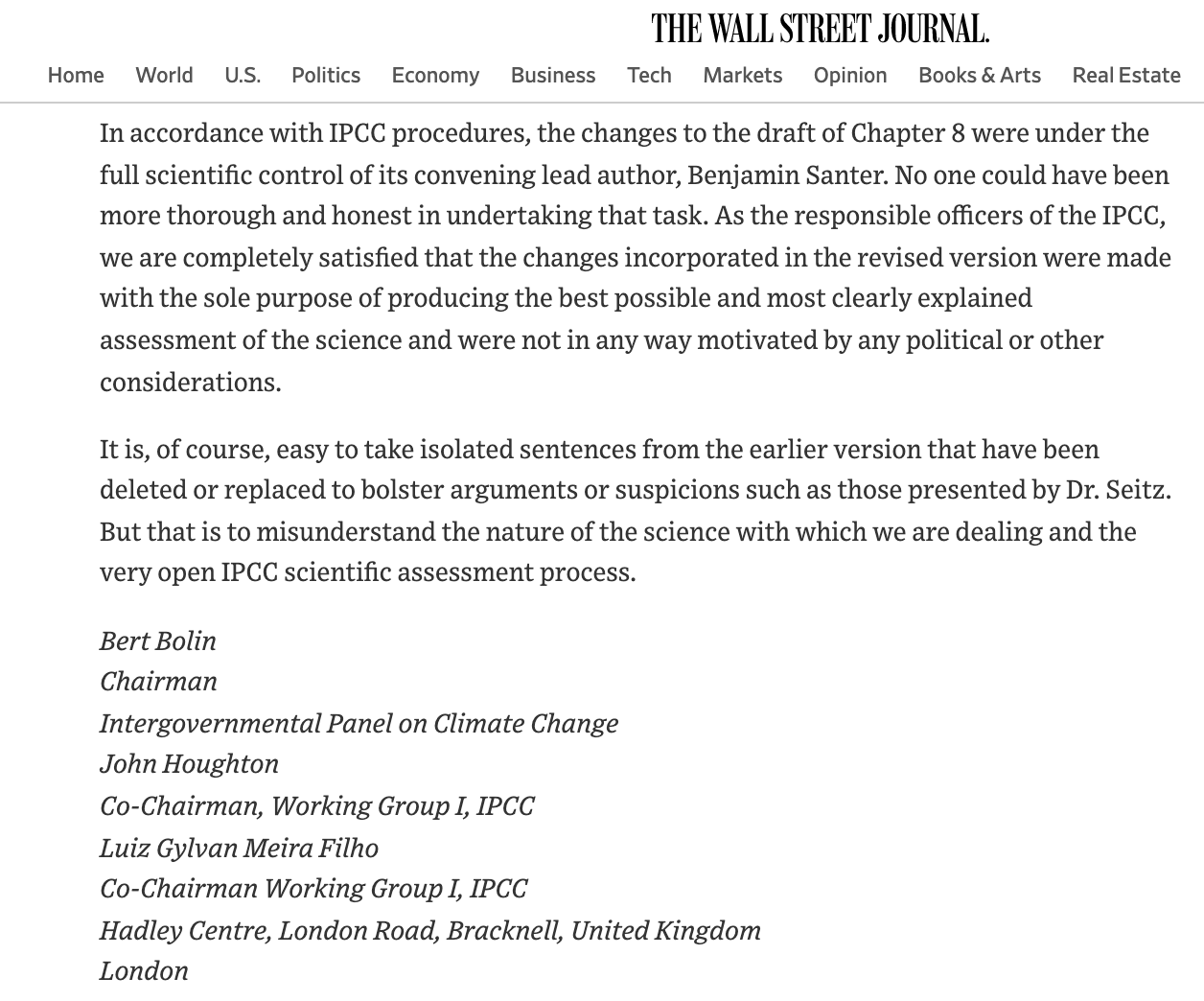 Now one counterargument that I can conceive of regarding any allegations of fraud targeted at the WSJ is that including the missing text in Bolin's letter would be redundant, as Santer has already said most of the same thing.

All that aside. If there actually was fraud in the process of reviewing and finalising the SAR, wouldn't any of the scientists who worked on it have noticed it? Wouldn't most of them have been able to read the report and spot the alterations made without their notice? Why haven't we seen at least one of them come out? Isn't it highly unlikely that not one of them would have broken this conspiracy?

That aside, Stephen Schneider has written up an excellent summary of the events surrounding Seitz' WSJ Op-ed. I will go over it in my next post in this thread.

TheNZThrower said:
It appears that the well known and reputable source of scientific information that is The Epoch Times claims that
Click to expand...

you should edit this line. People unfamiliar with the Epoch Times may not realize you are being sarcastic.

Also your title does not reflect the topic of the thread.
But good write up. I never knew the scientists hid inconvenient information from the public.

deirdre said:
the scientists hid inconvenient information from the public.
Click to expand...

they didn't
You must log in or register to reply here.

Claim: Pfizer's own data shows that their vaccine "does more harm than good"
2 3