Claim: The Democrats are trying to take away freedom of religion

Right now im being censored for posting facts. Why? Bc they make trump look good. I believe in freedom of religion. The dems are trying to take that away as well and the only god is science. So guess what I'm finding jesus. So when I see BLM and antifa holding F jesus signs I see the devil and evil in plain sight.


The following Q&A was part of a written interview with President Trump for Religion News Service. His answers appear in full below.

1. Last week you gave reference to thanking God that you had COVID. What did you learn spiritually during your COVID experience?

It was amazing to see so many great Americans who reached out and said they were praying for me and my family. This country is full of wonderful people with strong faith in God. Melania and I felt the prayers of Americans from all across the country – and even around the world. When I was at Walter Reed, I said, “There were miracles coming down from heaven.” I meant it – Melania and I are very thankful to God for looking out for our family and returning us to good health.

Religion News Service has also repeatedly written on Kamala Harris and Joe Biden, and published an editorial by Joe Biden last year in lieu of an interview.
Joe Biden

I first learned those values growing up in a Catholic, middle-class family in Scranton, Pennsylvania, and Claymont, Delaware. I learned them at my father’s dinner table, at Sunday Mass and at St. Paul’s and Holy Rosary Elementary. The nuns there taught us reading, writing, math and history — as well as core concepts of decency, fair play and virtue. They took as a starting point the teaching from the Gospel of Matthew: “Whatever you did for one of the least of these brothers and sisters of mine, you did for me.”

My whole idea of self and family, of community and the wider world, stems from those lessons. They drilled into me a core truth: Every single human being deserves to be treated with dignity. Everyone. The poor and the powerless, the marginalized and vulnerable, the least of these. That has been the animating principle of my life and my faith.

Scripture is clear: It’s not enough to just wish the world were better. It’s our duty to make it so.

And when my father would remind me, again and again — “Joey, there’s no greater sin than the abuse of power” — I knew: It’s never enough to just abhor or avoid the abuse of power; you have to stand up to end it, wherever it’s found.

I also found this article helpful:

Who will President Joe Biden listen to on faith matters?
The nation's second Catholic president is likely to bring a more restrained, interfaith approach to his faith-based politics than his predecessor.

At the vice presidential debate, you said “Joe Biden and I are both people of faith.” Tell us more about your own faith journey.
My faith journey started when I was a little girl. On Sundays, my mother would dress my sister, Maya, and me in our Sunday best and send us off to the 23rd Avenue Church of God in Oakland, California, where Maya and I sang in the children’s choir. That’s where I formed some of my earliest memories of the Bible’s teachings. It’s where I learned that “faith” is a verb, and that we must live it, and show it, in action.

My mother, an immigrant from India, instilled the same idea in me on trips to Hindu temples. And I’ve also seen it reflected in the Jewish traditions and celebrations I now share with my husband, Doug. From all of these traditions and teachings, I’ve learned that faith is not only something we express in church and prayerful reflection, but also in the way we live our lives, do our work and pursue our respective callings.

Joe Biden and Kamala Harris are both deeply religious on a personal level. The idea that they're generally opposed to religious freedom is strongly misinformed.

In some circles, a person's political stance on abortion is often seen as a placeholder for their stance on religion. But that's an oversimplification. 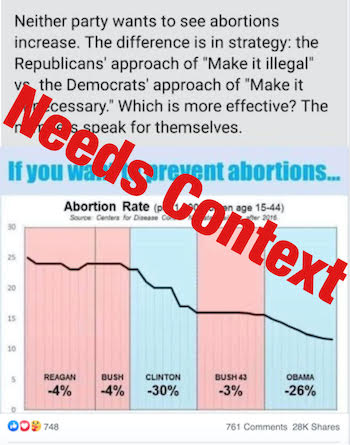 The graphs cites CDC data, but health department reporting on abortions has fluctuated so much over the years that making broad comparisons can prove challenging. Not every state has reported its abortion data for every year.

Moreover, experts said tying the abortion rate to the occupant of the White House alone is an oversimplification of a variety of factors that are at play.

We rate this claim Half True.

While serving on the Senate Judiciary Committee in 1982, [Joe Biden] faced a decision on whether to forward to the full Senate a constitutional amendment that would allow states to pass new abortion restrictions and effectively overturn Roe v. Wade, a landmark Supreme Court decision on abortion. Biden voted for the resolution, but insisted in an impassioned speech that while he personally opposed abortion on religious grounds — “I’m probably a victim, or a product, however you want to phrase it, of my background,” he explained — he remained unsure if he had “a right to impose” his religious beliefs on others.

Though it “might make your stomach turn a little bit,” he told both his socially distanced live listeners and viewers watching online, a “Democrat Christian” has more in common with conservative Christians — even “a staunch Trump-supporting Republican” — than with fellow Democrats who are not Christians. “And vice versa,” he added.

Pastors in the American church are used to dealing with division. “Our churches have always been segregated, because Christians — primarily white Christians — always held their whiteness in greater esteem than Christ,” he told Religion News Service before Election Day.

J.D. Greear, president of the Southern Baptist Convention and pastor of the Summit Church in Durham, North Carolina, said that Christians shouldn’t neatly fit into either political party.

Nor should they engage conversations about politics in the same way as others, Greear said in a podcast episode recorded the day after the election.

“The political discourse in our country trains us to assume the worst about everybody else’s motives even as we demand that they assume the best about ours. … I just think in the church we need to be better,” he said.

In East Harlem, Adour said what it will take is listening — and trying to help others listen, too.

“It’s very easy to put someone in a box as soon as they start talking about an issue,” he said.

“So often we dishonor Christ by trusting politicians or ideologies to idolatrous degrees. Or we refuse to love brothers and sisters in Christ across these dividing lines, instead desiring to demonize them or marginalize them or ignore or patronize them,” he said.

This thread doesn't debunk his claim. (A claim given by a youtube commenter without evidence, i might add.)

Did you ask him more context? maybe he is talking about the covid church shutdowns, or like he said ...he is talking about BLM and antifa (ie democrats) attacking people for believing in Jesus. His thoughts are kinda running into each other so a bit hard to pinpoint what he meant by your OP selected bit.

How does pointing out that Biden and Kamala claim to be religious, debunk his unevidenced claim? Two people do not make "the Democrats".

I dont know what your blurb about white people holding their whiteness in greater esteem then Christ, has to do with this topic.

first i would ask him to clarify more specifically what he means by that. it's different answers depending on his response.

No i dont agree with him. the Dems would never in a million years take away Muslim freedom of religion.
Although DiBlasio does seem to be a bit tough on the Jewish community in NYC.. so maybe you could look into that bit and find some common ground.

If his problem is churches being closed due to covid... you'd have to listen to his specific arguments. I personally think churches are dangerous in a pandemic. but so are alot of other unnecessary things that are open. You'd have to ask him to clarify.

I don't know if these messages are authentic or fake; but the problem is that there's a fight going on by creationists and the like who see science and faith as opposites. We're seeing this in some conspiracy theory communities; many Flat Earthers feel that the concept of the globe contradicts the bible.

So any politician who uses science to solve worldly problems and their own faith to solve their spiritual problems (and abstains from using their faith to solve other people's problems for them) will be seen to fail to support this kind of faith.

From my perspective, it amounts to "if you don't join me in my religious intolerance, you're with the devil", and that's not a stance that is open to being debunked; I think all you can do is show clearly that people whose faith differs from theirs are still decent and god-abiding and agreeing with you in many respects.

You can't make people tolerant by debunking; it takes being exposed to and getting to know those whom you are intolerant of, and learning to love them instead of fostering a hate facilitated by distance.

But that's the sentiment that gets translated into portraying politicians as anti-religion.
That, and a failure to espouse "traditional Christian values", which may in fact not be all that Christian if you look more closely.

So my attempt at debunking this claim is to show that both Biden and Harris are serious about their faith, in a way that others can respect.
You must log in or register to reply here.

Would a Biden decision give millions to migrants ?

Was It Possible For Trump To Take The Wheel?