Claim: Simone de Beauvoir said that women should not have the choice to stay at home

A claim that has been floated around right wing circles is a quote attributed to Simone de Beauvoir that goes as follows according to this Fox News article:

In 1976, the French feminist icon Simone de Beauvoir said, “No woman should be authorized to stay home to raise her children. Women should not have that choice, because if there is such a choice, too many women will make that one.”
Click to expand...

Now I was not able to find any quote along those lines in any of Beauvoir's work via a quick word search. If we take a look at her seminal work ''The Second Sex'', we find no statement matching the alleged quote if we perform a word search: 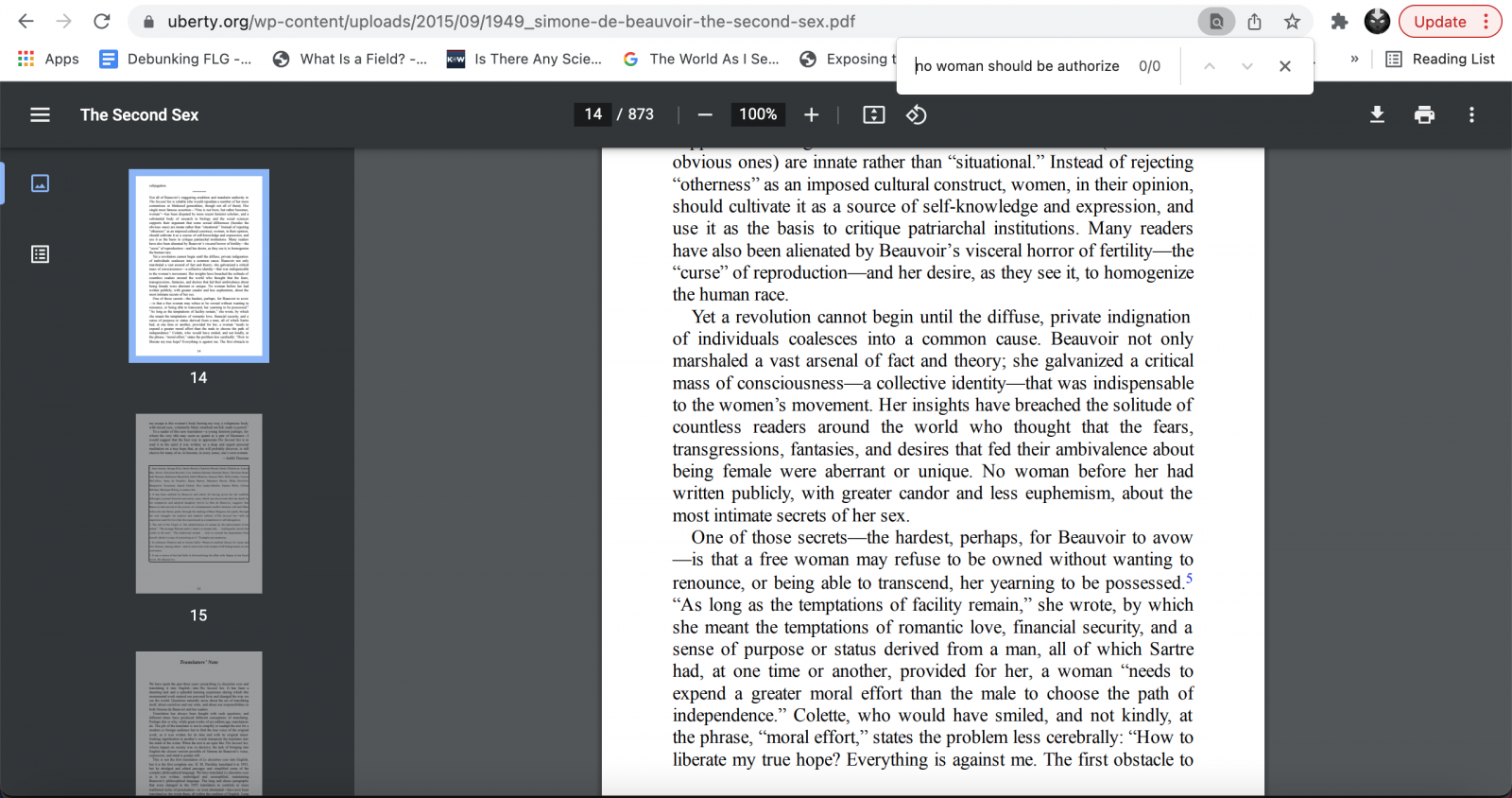 I mean, Beauvoir did have some other works which I haven't analysed, and maybe they might contain such a quote? I dunno, as a quote that only comes via extremely biased secondary sources from one end of the political spectrum seems suspect to me.
T

To add to this topic, I have came across the alleged quote on AZ quote, which cites the following source for it:

If anyone can obtain an online copy of it for confirmation, it would be very welcome.
T

To further add on to this topic, I was able to track down the Saturday Review interview, and she did apparently say that: 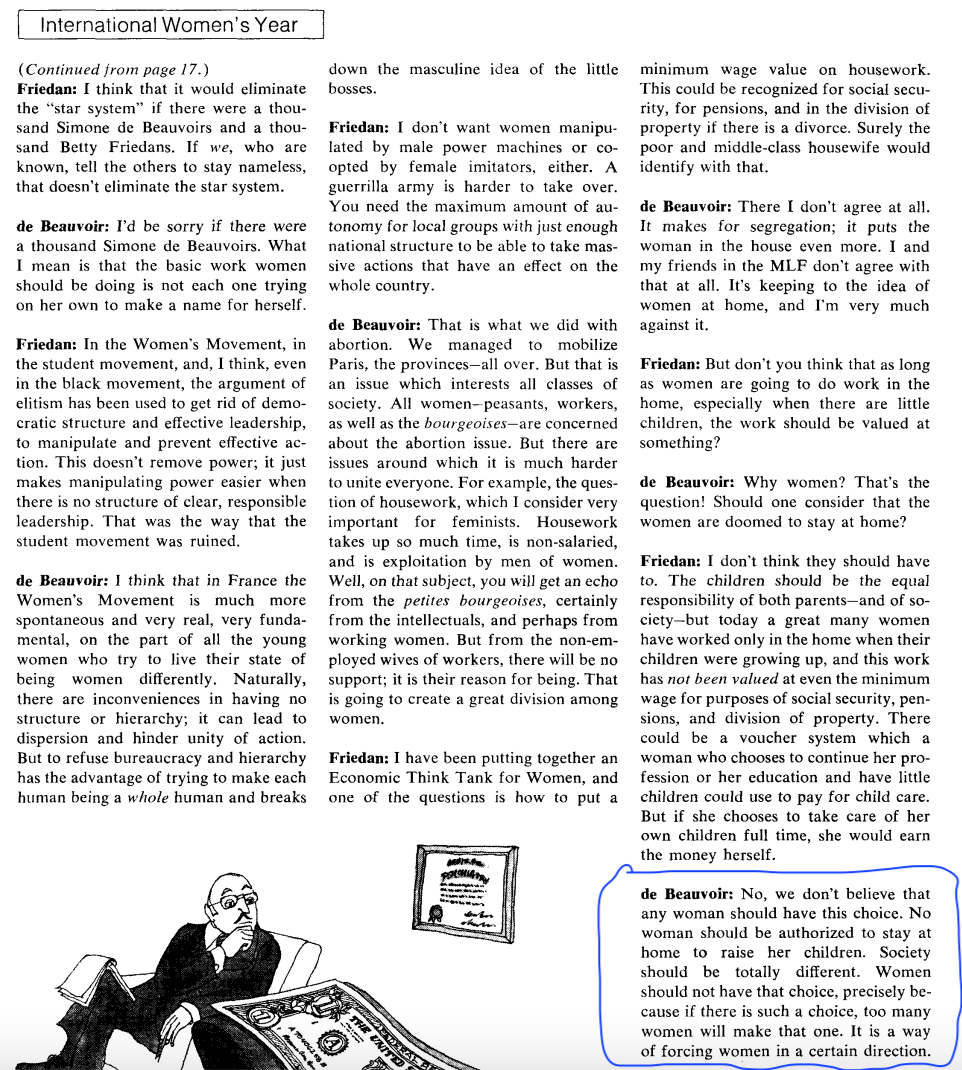 But if anyone is able to offer any further context behind Beauvoir's quote that I have missed out upon, then please comment.

TheNZThrower said:
If we take a look at her seminal work ''The Second Sex'', we find no statement matching the alleged quote if we perform a word search:
Click to expand...

I did a word search on "home", it provides plenty of context. (And then there's the historical context, the book came out in 1949.)


An important and selfrighteous woman recently carried out a study on women workers at a Renault factory: she asserts that they would rather stay at home than work in a factory. Without a doubt, they are economically independent only within an economically oppressed class; and besides, tasks carried out in a factory do not free them from household chores. If they had been able to choose between forty hours of weekly work in a factory or at home, they would undoubtedly have responded quite differently; and they might even accept both jobs eagerly if, as women workers, they would become part of a world that would be their world, that they would proudly and happily participate in building. In today’s work, without even mentioning women who work on the land, most working women do not escape the traditional feminine world; neither society nor their husbands give them the help needed to become, in concrete terms, the equals of men.

De Beauvoir would be ok with choice to stay at home if it didn't entail oppression, and wasn't caused by it.

For Simone de Beauvoir, keeping women at home is the means of women's oppression, and in thar world-view, it's also obvious why conservatives would take offense to her suggesting that women leave the home to get jobs: because it would end that oppression. Page 29:

Master and slave are also linked by a reciprocal economic need that does not free the slave. That is, in the master-slave relation, the master does not posit the need he has for the other; he holds the power to satisfy this need and does not mediate it; the slave, on the other hand, out of dependence, hope, or fear, internalizes his need for the master; however equally compelling the need may be to them both, it always plays in favor of the oppressor over the oppressed: this explains the slow pace of working-class liberation, for example. Now, woman has always been, if not man’s slave, at least his vassal; the two sexes have never divided the world up equally; and still today, even though her condition is changing, woman is heavily handicapped. In no country is her legal status identical to man’s, and often it puts her at a considerable disadvantage. Even when her rights are recognized abstractly, long-standing habit keeps them from being concretely manifested in customs. Economically, men and women almost form two castes; all things being equal, the former have better jobs, higher wages, and greater chances to succeed than their new female competitors; they occupy many more places in industry, in politics, and so forth, and they hold the most important positions. In addition to their concrete power, they are invested with a prestige whose tradition is reinforced by the child’s whole education: the present incorporates the past, and in the past all history was made by males. At the moment that women are beginning to share in the making of the world, this world still belongs to men: men have no doubt about this, and women barely doubt it.

May 16, 2022
WhistlingWinds
W
T
Claim: The Mariupol theatre bombing is a false flag

May 29, 2022
WhistlingWinds
W
T
Claim: National Endowment for Democracy has funded the Chief Editor of The Kyiv Independent