The claim here is fairly simple:


Without public notification of any kind, the US Navy has secretly been conducting electromagnetic warfare testing and training on public roads in western Washington State for more than five years.

An email thread between the Navy and the US Forest Service between 2010 and 2012, recently obtained via a Freedom of Information Act (FOIA) request filed by Oregon-based author and activist Carol Van Strum in November 2014, revealed that the Navy has likely been driving mobile electromagnetic warfare emitters and conducting electromagnetic warfare training in the Olympic National Forest and on public roads on Washington's Olympic Peninsula since 2010

It is actually an interesting read, more so because the emails establish the fact that the military had to navigate numerous federal laws and agencies to win approval for training. More importantly, none of this process was secret.

It provided National Environmental Policy Act (NEPA) documentation of its training as required by federal law in its request to the U.S. Forest Service for permits to use public land in Washington state.

Included in their application was approval from the National Telecommunications and Information Administration (NTIA) for the frequencies used in training.

U.S. Forest Service biologists were allowed to review the Navy request before granting the permits.

In the cited emails, the Navy provided a description of the actual radar emitters being used. 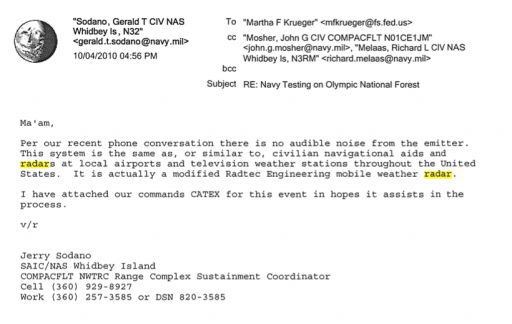 The Navy did provide public notice according to its Pacific Northwest EW Range Environmental Assessment (EA) published in September 2014.

CEQ regulations (40 CFR 1506.6) direct agencies to involve the public in preparing and implementing their NEPA procedures. The Navy circulated the Draft EA for public review from August 01, 2014 to August 15, 2014. Display advertisement announcing the availability of the Draft EA and providing information on the public review and comment period were published in local and regional newspapers. Additional public notices included a postcard mailer, which was distributed to various elected officials, government agencies, federally recognized tribes, nongovernmental organizations, and the public within the Study Area. Finally, an informational flier was mailed to select locations for public viewing. No comments were received on the Draft EA.

Basically, for the life of me, I cannot see how the original claim of secrecy holds any water whatsoever.