In response to the sanctions against the Kremlin, the Russian president has put the defense forces of his country on high alert. (Our translator says "nuclear forces", but that seems to be incorrect.)

Other news outlets have translated this as "deterrence forces". The Russian news agency TASS reported it like this:

"Defense Minister of the Russian Federation Army General Sergey Shoigu reported to Russian Supreme Commander-in-Chief Vladimir Putin that in accordance with his decree, the alert teams of the command posts of the Strategic Missile Force, the Northern and Pacific Fleets and the military command of long-range aviation had switched to enhanced combat alert," the ministry said.

The Russian leader said at a meeting with Defense Minister Shoigu and Chief of the General Staff Valery Gerasimov in the Kremlin on February 27 that "top officials of leading NATO countries also allow themselves to make aggressive pronouncements towards our country" and thus ordered to put the Russian Army’s deterrence forces on high alert. The Kremlin meeting took place amid Russia’s special military operation in Ukraine. Moscow commenced the operation in response to a request from the heads of the Donbass republics for assistance.

The Russian strategic deterrence forces are intended to deter aggression against Russia and its allies and rout an aggressor in a war with the use of various armaments, including nuclear weapons. They comprise the strategic offensive and defensive forces.

The Russian strategic defensive forces are based on combat-ready troops of the Aerospace Force that integrates the missile attack early warning system, the space control system, the anti-ballistic missile, space and air defense systems.

tweet said:
In response to the sanctions against the Kremlin, the Russian president has put the defense forces of his country on high alert.
Click to expand...

it is not "in response to sanctions" (as your TASS link points out):


"top officials of leading NATO countries also allow themselves to make aggressive pronouncements towards our country" and thus ordered to put the Russian Army’s deterrence forces on high alert. 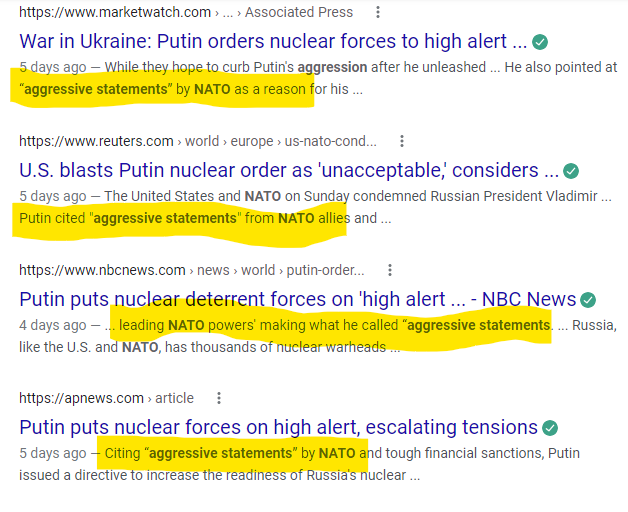 ":06 dear collegues, you see that Western countries are taking not only unfriendly actions against our country in the economic sphere, I mean illegitimate and a sanction that everyone knows well, but top officials of leading NATO countries also allow themselves to make aggressive statements against our country. There for.."
Source: https://www.youtube.com/watch?v=tHLUv_akHKQ

deirdre said:
that Western countries are taking not only unfriendly actions against our country in the economic sphere
Click to expand...

he gives 2 reasons, and 1 of them is sanctions

3 of your 4 "yellow marker" sources support this:

The increasingly erratic Putin made a clear link between ever-tightening sanctions and his decision Sunday to raise Russia’s nuclear posture. He also pointed at “aggressive statements” by NATO as a reason for his move

I'll let his words speak for themselves.

deirdre said:
":06 dear colleagues, you see that Western countries are taking not only unfriendly actions against our country in the economic sphere, I mean illegitimate and a sanction that everyone knows well, but top officials of leading NATO countries also allow themselves to make aggressive statements against our country. There for.."
Click to expand...

Mendel said:
he gives 2 reasons, and 1 of them is sanctions
Click to expand...

deirdre said:
I'll let his words speak for themselves.
Click to expand...

not only reason 1, but also reason 2

do these "aggressive statements" even exist?

Mendel said:
do these "aggressive statements" even exist?
Click to expand...

the point is poland-de purposefully left the aggressive statements bit out, making it look like Putin put his country on high alert over sanctions only.

at least as far as Putin being paranoid about NATO moving too close to Russia etc. Whether we may or may not think these escalations are necessary, doesnt mean Putin wouldn't consider them aggressive.

I dont know what other countries have said. I just remember when i heard Biden speak that night i thought "uh oh" and then shortly after Putin made the "aggressive statements" comment. 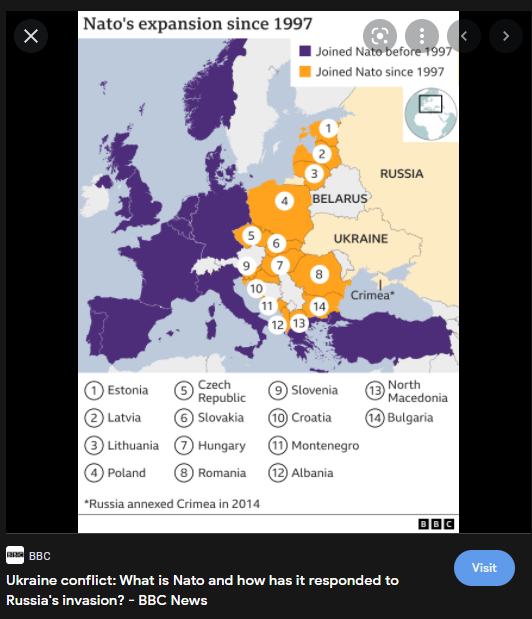 And we’re preparing to do more. In addition to the economic penalties we’re imposing, we’re also taking steps to defend our NATO Allies, particularly in the east.

Tomorrow, NATO will convene a summit — we’ll be there — to bring together the leaders of 30 Allied nations and close partners to affirm our solidarity and to map out the next steps we will take to further strengthen all aspects of our NATO Alliance.

Although we provided over $650 million in defensive assistance to Ukraine just this year — this last year, let me say it again: Our forces are not and will not be engaged in the conflict with Russia in Ukraine. Our forces are not going to Europe to fight in Ukraine but to defend our NATO Allies and reassure those Allies in the east.

As I made crystal clear, the United States will defend every inch of NATO territory with the full force of American power. And the good news is: NATO is more united and more determined than ever.

There is no doubt — no doubt that the United States and every NATO Ally will meet our Article 5 commitments, which says that an attack on one is an attack on all.

Over the past few weeks, I ordered thousands of additional forces to Germany and Poland as part of our commitment to NATO.

On Tuesday, in response to Russia’s aggressive action, including its troop presence in Belarus and the Black Sea, I’ve authorized the deployment of ground and air forces already stationed in Europe to NATO’s eastern flank Allies: Estonia, Latvia, Lithuania, Poland, and Romania.

Our Allies have also been stepping up, adding — the other Allies, the rest of NATO — adding their own forces and capabilities to ensure our collective defense.

And today, within hours of Russia’s unleashing its assault, NATO came together and authorized and activated — an activation of response plans.

This will enable NATO’s high-readiness forces to deploy and — when and where they’re needed to protect our NATO Allies on the eastern boundaries of Europe.

And now I’m authorizing additional U.S. forces and capabilities to deploy to Germany as part of NATO’s response, including some of U.S.-based forces that the Department of Defense placed on standby weeks ago.

I’ve also spoken with Defense Secretary Austin and Chairman of the Joint Chiefs, General Milley, about preparations for additional moves should they become necessary to protect our NATO Allies and support the greatest military Alliance in the history of the world — NATO.

Mendel said:
he gives 2 reasons, and 1 of them is sanctions
Click to expand...

seems it's only 1 reason after all

Russian President Vladimir Putin has described sanctions imposed by Western nations over his invasion of Ukraine as "akin to a declaration of war".

i guess thousands of news agencies are wrong in interpreting "not only" and "but...also", and your interpretation is superior. (<that is sarcasm)

"These sanctions that are being imposed are akin to a declaration of war but thank God it has not come to that," Putin said, speaking to a group of flight attendants at an Aeroflot training centre near Moscow.

He said any attempt by another power to impose a no-fly zone in Ukraine would be considered by Russia to be a step into the military conflict. Such a step he said would have catastrophic consequences for Europe and the world.

Jul 31, 2022
TinFoilHat
T
H
Were Fravor and co in the middle of a test of radar spoofing tech?