I am not sure if this should be here or under "Contrails and Chemtrails". Anyway here it goes:

Global MARCH Against Chemtrails and Geoengeneering claims that the Patent US 6245531 is what it is known as the Morgellons disease.

FACT - MOREGELLON'S Is Patent US 6245531 And It Is Not A Disease, It's A US Patented Military Bio-Weapon With Insect DNA Ecdysone In Humans,More details ->http://tinyurl.com/oq67pnb / View patent -> http://www.google.com/patents/US6245531 /

I simply don't find anything in the patent text that suggest the connexion between this patent and the so called morgellons syndrome. The claim is presented as a fact without further arguments.

Perhaps if you are an insect -

FIELD OF THE INVENTION
This invention relates generally to the use of recombinant DNA methods as applied to the nucleic acid sequences and polypeptides characteristic of insect steroid receptor superfamily members and, more particularly, to uses of such receptors and the DNA regulatory elements associated with genes whose expression they regulate for the production of proteins in cultured cells and, and to uses of such hormone receptor proteins and genes in identifying new hormones that control insect development.

Gabriel Incertis said:
I simply don't find anything in the patent text that suggest the connexion between this patent and the so called morgellons syndrome.
Click to expand...

Here's another clue to the perceived connection:

A segment of the Patent abstract:


This invention relates generally to the use of recombinant DNA methods as applied to the nucleic acid sequences and polypeptides characteristic of insect steroid receptor superfamily members and, more particularly, to uses of such receptors and the DNA regulatory elements associated with genes whose expression they regulate for the production of proteins in cultured cells and, and to uses of such hormone receptor proteins and genes in identifying new hormones that control insect development.

It basically appears to be merely a sort of "high-tech" attempt at the continuing problem of pest control, particularly those insect pests that threaten crop production.

I would provide focus on the dates presented in the patent documentation. I'd also like to note that this level of DNA/genetic science knowledge is FAR beyond the typical layperson's grasp (including myself).

I know from experience with those in the medical profession who related some of the challenges to their education to become an MD that these are some of the most difficult and specialized fields for a scientist to learn. Molecular chemistry (??) or, alternately, "Biological Chemistry" I think described the course's topic.
Last edited: Nov 12, 2014

Staff member
I saw this claim as well. I had a look at the patent. Basically, in as close to layman's terms as I can get with molecular biology, it appears to be a method for mass-producing a protein that acts as a receptor for an insect hormone called ecdysone.

Ecdysone is a hormone that controls insect moulting (shedding of the exoskeleton, or for example when transforming from larval to adult forms). Some insecticides are designed to interact with ecdysone receptors and disrupt the moulting process, hence killing the insects.

The relevant part of the patent text:

As one weapon against the destruction of cultivated crops by insects, organic molecules with pesticidal properties are used commonly in attempts to eliminate the insect populations. However, the ecological side effects of these pesticides, due in part to their broad activity and lack of specificity, and in part, to the fact that some of these pesticides are not easily biodegradable, significantly affect populations of both insect and other species of animals. Some of these organisms may be advantageous from an ecological or other perspective. Furthermore, as the insect populations evolve in directions to minimize the effects of the applied pesticides, the amounts of pesticides applied are often elevated so high as to cause significant effects on other animals, including humans, which are affected directly or indirectly by the application of the pesticides. Thus, an important need exists for both highly specific pesticides or highly active pesticides which have biological effects only on the species of animals targeted by the pesticides, and are biodegradable. Novel insect hormones which, like the ecdysteroids, act by complexing with insect members of the steroid receptor superfamily to control insect development, are likely candidates for pesticides with these desirable properties.

The invention is about trying to develop more specifically targeted pesticides that won't have side effects on humans or other organisms.

I really cannot begin to guess where the link to Morgellons is supposed to be. Ecdysone is pretty non-toxic to mammals, as far as I can see:

The only thing I can think of is that the patent includes expressing the proteins in "mammalian cells":

The patent covers plant, bacteria, insect and animal. It is not uncommon for patents to cover every related eventuality, just for the sake of completeness. And cultured mammal cells are often used in protein synthesis in this way.
Last edited: Nov 12, 2014

Trigger Hippie said:
Here's another clue to the perceived connection:

OK, now this makes some sort of sense - but it is not to do with the patent these people are citing! If they wanted to talk about this aspect, then this would be a more relevant patent: http://www.google.com/patents/EP1112360A1?cl=en

This is new stuff to me (and although I studied chemistry, that is a world away from genetics and biochem!) but it appears that this insect hormone, ecdysone, can be used to trigger protein manufacture in mammal (and human) cells for gene therapy.

Normally, humans don't have a receptor for ecdysone, so it can be used as a targeted "switch". The idea is that you introduce the genetic coding for an ecdysone receptor into the cells, along with the genetic coding to create some other protein which will have therapeutic effects.

When you then introduce ecdysone (or a similar steroid that can bind to an ecdysone receptor), it will act as a switch to turn on production of the other protein.

This is a link to a commercial application of the technology: http://www.genomics.agilent.com/article.jsp?pageId=496&_requestid=937758

Yes, ecdysone receptors are being used in gene therapy. But this is just one method of turning on the gene expression, and ecdysone by itself just acts as the switch to cause "a gene" to be turned on. Nowhere in any of this is there any evidence for the supposed artificial gene that is being switched on to cause Morgellons!


If I can suggest an analogy, it is like using a patent for a new kind of surgical scalpel as evidence that mad doctors are going to cut out everybody's livers.


I would also take issue with the use of this very misleading image: 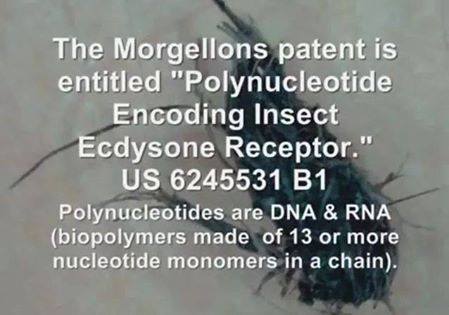 Polynucleotides are indeed DNA and RNA, but in the sense of this patent they are simply genes that express the ecdysone receptor protein. This picture is clearly intended to imply that they are instead some form of polymer fibre such as Morgellons "sufferers" pull from their skin.

Trailblazer said:
Honestly, who sits down and comes up with this stuff, and why?
Click to expand...

Exactly. Here it is not only about people misunderstanding information or applying confirmation bias, but about people FABRICATING disinfo. I don't think the author of this claim really believes that this patent is related to morgellons "as a fact". At some point he/she must have decided that the content of this patent was enough inaccessible and with the appropriate jargon to cheat gullible people. This kind of materials are plentiful in the chemtrail hoax. I wonder what is the point of trying to brace a conspiracy theory with easily debunkable fabrications.
You must log in or register to reply here.

Debunked: The Science Claims of Global March Against Chemtrails and Geoengineering