There have been various accusations by both Russia and Ukraine of booby trapping civilian areas. To cite one example, a video from the Luhansk People's Republic purports to show a Ukrainian booby trap being set up to the entrance of a basement in Severodonetsk:

Looking at the grenades in question, they appear to be German DM51 grenades: 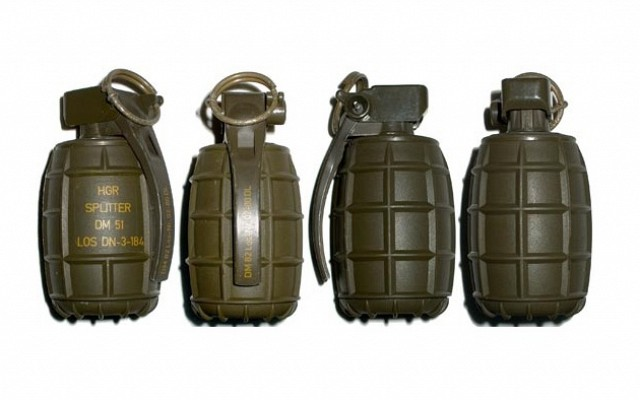 Does Ukraine actually use them? My guess would be yes as there have been videos of Ukrainian troops demonstrating that they've acquired some from Germany:

So this appears to be a confirmed case of a Ukrainian war crime. However, let's entertain the idea that it is a false flag for one. One objection is that the civilians sheltering in the basement won't have known of the presence of the trap.

However, it also could be the case that the soldiers defusing have yelled a warning of the trap towards the civilians, or that they've been told that the place would be mined by the Ukrainian soldiers forcing them into the shelter, assuming they didn't voluntarily enter the basement to begin with. Another possibility is that the civilians would have heard the Ukrainians discussing the trap while they set it up.

So what do you guys think?

nothing about this is "confirmed"

(Geneva, June 15, 2022) – Russian forces are using landmines in Ukraine that are causing civilian casualties and suffering, as well as disrupting food production, Human Rights Watch said in a report released today. Russia is the only party to the conflict known to have used banned antipersonnel mines, while both Russia and Ukraine have used anti-vehicle mines.

There is no credible information that Ukrainian government forces have used antipersonnel mines in violation of the Mine Ban Treaty since 2014 and into 2022.

Russian forces have also emplaced many victim-activated booby-traps as they retreated from positions taken during the initial phase of the invasion. Booby-traps can function as antipersonnel mines when the fuze that is used is activated unintentionally by a person.

Mendel said:
nothing about this is "confirmed"
Click to expand...

So you're saying that it hasn't been confirmed as to whether the video of the alleged Ukrainian booby trap is real or not? What would your current take on it be?

TheNZThrower said:
So you're saying that it hasn't been confirmed as to whether the video of the alleged Ukrainian booby trap is real or not? What would your current take on it be?
Click to expand...

Russians have committed a lot of confirmed war crimes in Ukraine, so they're in need of "but the Ukrainians" propaganda. The above "booby trap" aligns with that, and it contains no evidence of not being staged, and is therefore untrustworthy. It might show what it purports to show, but there's no way to tell, and there's really no context to it either.

The HRW report I referenced earlier is a lot more trustworthy, because it originates with a reputable NGO, and documents many examples in detail.
You must log in or register to reply here.