This article discusses compelling—and very nearly conclusive—evidence of Ebola fraud in the United States. The evidence we now have indicates, by force of deductive logic, that it cannot possibly be true that Dr. Kent Brantly and Nancy Writebol were both incompatible with Thomas Eric Duncan for plasma transfusion purposes.

There's a long argument involving patients who have received plasma from recovered Ebola patients, while others received whole blood. There's no logic chart, which doesn't help the clarity of the author's argument. Debunkers may wish to do their own.

The article doesn't take into account that there is + and - blood types:

This kind of thing is why I've added Globalresearch.ca to my "Scopie's law" list.

TemplarJLS said:
The article doesn't take into account that there is + and - blood types:

This kind of thing is why I've added Globalresearch.ca to my "Scopie's law" list.
Click to expand...

Looking a bit at different websites, it does look like type + and - does not influence the compatibility of plasma.


Plasma Compatibility
Plasma contains Anti-A and Anti-B antibodies depending upon blood group. Patients should only receive plasma which does not contain an antibody which could attack their own red cells.(4)

Antibodies are important molecules our immune system makes to help protect ourselves against foreign things such as bacteria and viruses. Antibodies can also be formed in response to different blood groups.

Group AB plasma does not contain any Anti-A or Anti-B. AB plasma can be given to patients who are group AB, A, B or O. Group AB donors are called “universal plasma donors” and their plasma can be safely given to any patient.(4) 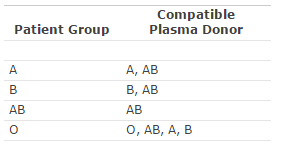 But the link which is used as a source states:

I have not checked all the sources of article, but I suspect that there might be a confusion about how it is done. Some articles state that the antibodies exist both in the blood and plasma, so they might need a donor which matches in both cases, which would only be the exact same type.
Source: http://www.huffingtonpost.com/2014/10/23/ebola-survivors-blood_n_6034862.html

"Blood and plasma therapy are medical interventions with a long history, safely used for other infectious diseases," Johan van Griensven, the project's coordinating investigator, said in a statement on Thursday.
...
Blood and plasma from recovered Ebola patients has been used occasionally in the past, including during an Ebola outbreak in 1995 in Kikwit, in the Democratic Republic of Congo, when seven out of eight patients getting convalescent whole blood survived.

If the treatment is whole blood, it means that patients with negative blood type needs the exact same type (Rh & ABO), while positive blood types needs to match in ABO only.