Andrew Keen's book, "The Cult of the Amateur" lists many of the problems found in the internet revolution (2.0), and it's push towards a "democratized media".
No need for more pushing....it's already here, and it's self-replicating.

Part of Keen's viewpoint is that with the sheer amount of user-created content by Bloggers and other Citizen Journalists, most of that content remains on the level of an amateur.....everybody attempts to add their contribution or spin to the information network.
"Big Media" (BM) although not perfect, has more resources , they have fact-checkers, they have editors, they have bigger budgets to cover a subject in depth, and they have a responsibility to their readers/listeners/watchers. There is an expectation to get things right, otherwise lose their following and their credibility (then their jobs).
Bloggers don't have that. Bloggers won't get fired by giving out false or un-researched information. Political discourse by Citizen Journalists most often becomes nothing more than pure political opinion....and so-on.....

There's all sorts of arguments against Keen's ideas. They are not new ideas either. But he had the guts to say it.
The democratized media is a fresh rebellion against the old Big Media standbys (BM) who in the eyes of many, have had a mental monopoly on news and information. The internet has opened-up the choices of where to get your news from.
But the problem arises when there are so many choices for information, people, with a few clicks of their mouse, can and often turn to sources giving them just what they want to read....sites that are likely confirming what they already believe. People enjoy hearing what they already know, it confirms their beliefs. It gives people satisfaction that they were right all along.

So it's bewildering that even though there are so many choices of information and opinions, that people still seek out their little niche in the forest. This is especially true for many of those who claim to "break away from the dogma and control of BM" only to voluntarily place themselves in a situation with a different dogma and a different set of controls.............and they like it there.
I guess that's called "choice". It's certainly not called variety.

I read somewhere that nearly all purchasers of flattering books on Obama, were already Obama supporters. The same theory was true for supporters of Romney.

But this "new freedom" can be used and abused to push an agenda or sell a product. It's a marketers' playground.

When I'm trying to search for something particular, I often don't scan the titles given to me in a Google search.....I end up looking at the URL source (just below the title) for clues on whether or not it may take me to an agenda-laden site.

More and more "news websites" have opened up their format to Citizen Journalists, often openly advertizing the idea of "you can write for us too" - found directly from their home-page. Huffington Post, most notably. http://www.businesswire.com/news/home/20120627005366/en/Huffington-Post-Announces-Web-Exclusive-Content-Agreement-Ustream

"We launched Off The Bus in 2007 to go beyond the one-dimensional horse-race aspect of election coverage and actually respond to the widespread dissatisfaction about the way campaigns are covered," said Arianna Huffington, president and editor-in-chief of the Huffington Post Media Group.
Click to expand...

Bullshit, I say. It's to increase visits to their site to attract advertisers. It's also so they can get near-free coverage on a wider range of topics, and possibly putting their "staff writers" out of a job.
Arianna has a track record of leading unpaid bloggers on, suggesting future pay, then nothing. So much so, that the H. Post had to post a rebuttal blog for angry bloggers...read the comments too....

NaturalNews....makes no bones about accepting user-created "articles", it's right there on their home-page. 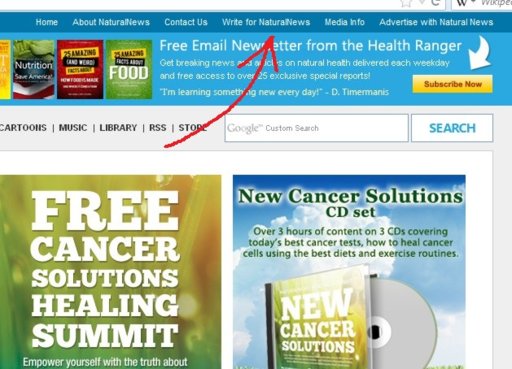 
Working with NaturalNews is easy. You don't pay us anything to get started, and we don't pay you anything for your stories. Instead, Google pays you directly for the Adsense earnings generated by the ads appearing above your news article.

So it's a win-win for NNews...they don't pay for content, but they get paid from increased site traffic and ad-clicks. This is utter incentive to attract sensationalistic, unprofessional, untrue stories.

• Each business day, articles links and pictures are emailed out to over 100,000 NaturalNews subscribers who click and read the news items that interest them.

• News items published on NaturalNews are automatically syndicated via RSS, reaching tens of thousand of additional readers each day.

• Google News spiders all NaturalNews articles within minutes of their publication, providing valuable article publicity through the Google News pages.

Many "citizen journalists" posting articles on NNews, are actually doing so, to sell their products. Have a gander.....
https://www.google.com/search?q=%22my+article%22+%22on+natural+news%22+-oz&safe=off&complete=0&site=webhp&ei=DXefUYWpHeTAiwKNp4DgCQ&start=10&sa=N&biw=1920&bih=959

rant/end
You must log in or register to reply here.

The meaning of "Woke", and it's origination.

T
Claim: Simone de Beauvoir said that women should not have the choice to stay at home