The headline from a recent story by Mike Adams in Natural News claims that: 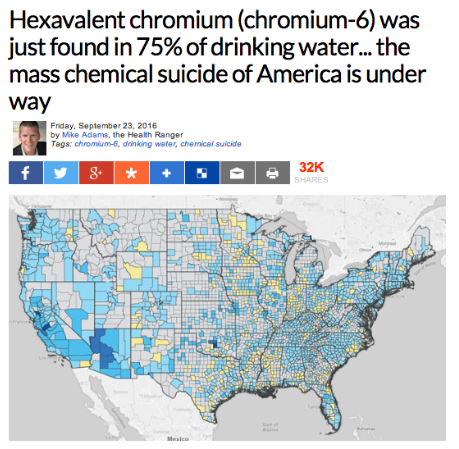 Chromium-6 is found in both nature and is also the byproduct of industrial processes. It is probably best known from the 2000 movie Erin Brockovich.

A closer look at the story reveals Adams’ claim is the result of a combination of cherry picked data and badly exaggerated probability.


Adams’ story is based on two numbers:

The first comes from the California EPA's Office of Environmental Health Hazard Assessment(OEHHA).


In July 2011 OEHHA established a PHG [Pubic Health Goal] for chromium-6 of 0.02 μg/L. The PHG represents a de minimis lifetime cancer risk from exposure to chromium-6 in drinking water, based on studies in laboratory animals. OEHHA also prepared a PHG fact sheet. The availability of the chromium-6 PHG enabled CDPH to proceed with setting a primary drinking water standard.

According to the Office of Environmental Health Hazard Assessment, keeping exposure to 0.02 parts per billion will reduce the probable lifetime risk of cancer from chromium-6 to one in one million. This is a goal and does not reflect any existing state or federal standard.

The second number comes from an Environmental Working Group (EGW) report cited in Adams’ original article. Between 2013 and 2015, the EPA ordered local utilities to conduct tests for chromium-6.

The results are illustrated on an interactive map.

The second number includes the total number of Americans who live in counties that exceed chromium-6 levels of .02 parts per billion. According to the EGW, this includes 218 million people, or the 75% mentioned in Adams’ headline.


There are a few big holes in Adam’s story

The most obvious is that chromium-6 has not “just” been found out. In fact, OSHA and the EPA have specifically been focusing on industrial chromium exposure for decades and have extended their research into its overall public health impact for years.

If you look at the interactive map, a large number of the counties portrayed as part of the “mass chemical suicide” have chromium-6 rates that are marginally higher than the California Public Health Goal standard of .02 parts per billion. The same is true for the actual probability of developing cancer. 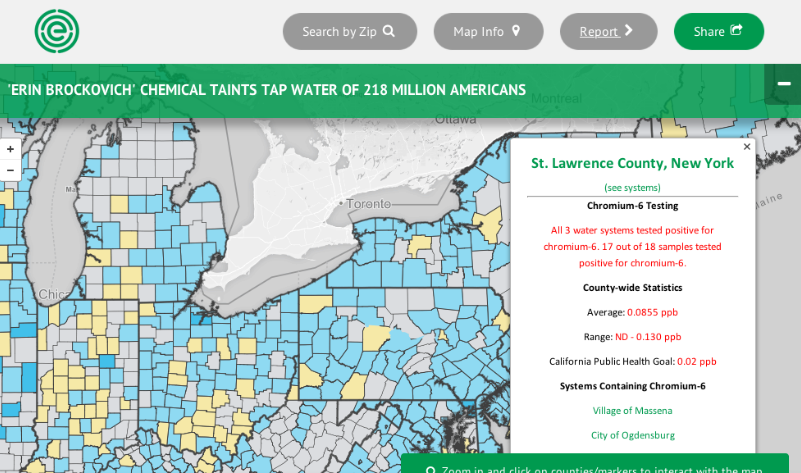 For the sake of perspective, I am including the probabilities of developing cancer from the American Cancer Society.

http://www.cancer.org/cancer/cancerbasics/lifetime-probability-of-developing-or-dying-from-cancer
You must log in or register to reply here.