Charlie Veitch was a prominent 9/11 truther until 2011, when he accompanied the BBC in filming the documentary "9/11 Conspiracy Road Trip". After speaking with some experts on the matter, he changed his mind on the subject and made a video explaining it:

The video garnered him a lot of negative attention, even death threats, from the truther community as he was fairly well known. He lost a lot of close friends.

There is an excellent article by Vice Magazine on him, detailing his life leading up to and after he changed his mind. The article also does a great job of discussing the negative attention those renouncing their beliefs in a conspiracy tend to receive, particularly those who are well known and entrenched in the community.


Charlie was branded a deserter. Google "Charlie Veitch traitor" today, and you get around 38,000 results. Depending on which link you click, he’s either totally insane, an establishment shill, brainwashed, a government agent, a satanist, a sex criminal, corrupt, or a blackmailed putz. Videos were mocked up superimposing dollar signs in his eyes, horns on his head, and his face onto Gary Glitter’s body. One of Charlie’s oldest heroes, Alex Jones—that guy who freaked out at Piers Morgan and exists in a space somewhere between Glenn Beck and Charlie Sheen—declared that Veitch had “psychopath eyes.” To thousands it seemed that Charlie Veitch himself had become evidence of a very real and very evil New World Order.

“The worst abuse,” sighed the 6'5" activist in his unlikely Scottish-Brazilian accent, “was on my fucking birthday. My website got hacked and someone sent an email to 15,000 people, saying that I was a child molester.” Bleak.

On the subject of debunking working, however, he did something not many devout conspiracy theorists do:


Somehow, out of this gum boot of rotten broadcasting, Charlie found peace. As his low-rent companions buried their heads in the swill, refusing to listen; he calmly heard the experts, and reevaluated his position. Four days into shooting and he was in Times Square, recording that video.

jvnk08 said:
Charlie Veitch was a prominent 9/11 truther until 2011, when he accompanied the BBC in filming the documentary "9/11 Conspiracy Road Trip". After speaking with some experts on the matter, he changed his mind on the subject and made a video explaining it:

The video garnered him a lot of negative attention, even death threats, from the truther community as he was fairly well known. He lost a lot of close friends.
Click to expand...

I can't see why anyone rational would take exception to this video. Naturally there are some extremists in the conspiracy theory group, as in any other group. I can only think he was 'attacked' by these extremists which are a very small minority.

He makes some good points about the government's deceptions and willingness to kill innocent people, which I agree with. It is a simple matter for those who hold life at such low value to transpose their crimes on other nationals to their own nationals. People realise this which then spurs peoples suspicions in other areas, notably FEMA camps and drone attacks on U.S soil. Lockdowns and virtual martial law in watertown and an hour long gun battle with an unarmed man hiding in a boat tend to worry a lot of people.

For someone who has had the experience of being able to question the architects and engineers involved in the construction of the knew buildings, he comes up with highly questionable examples as to why it wasn't a demolition.

The planes crashing into the buildings were well within their capacity to withstand and indeed they did and even NIST acknowledge this was not the reason they collapsed. He glosses over kinetic energy as if that explains everything when millions of people know full well that it doesn't.

I think he is just easily swayed and enjoys being on yt from any angle. He may have lost 'friends' but he has certainly made a new set of 'friends'. Wonder how they will react if he switches again? lol, as if I don't know.

Anyway, I have a serious complaint about jvnk08... I am petitioning to have his avatar changed on the grounds that it is psychological warfare.

How can anyone debate when confronted with that avatar which is so cool, it just makes me laugh and smile whenever I see it... STOP MAKING ME LAUGH.

Oxymoron said:
The planes crashing into the buildings were well within their capacity to withstand and indeed they did and even NIST acknowledge this was not the reason they collapsed. He glosses over kinetic energy as if that explains everything when millions of people know full well that it doesn't.
Click to expand...

I think he's probably talking about specific objections like "how could soft aluminum cut hard steel?", or "why did the plane look like it was sinking into the building?" (things lee used to bring up) - and not really the collapse itself.

Here's another piece(in my opinion, superior to the Vice article) on Veitch:

Oxymoron said:
He glosses over kinetic energy as if that explains everything when millions of people know full well that it doesn't
Click to expand...

They do, do they? Then they must wonder how wars are won.

The planes that struck the towers had thirteen times the energy the architects assumed might occur. Twelve tons of kerosine, atomized and ignited immediately afterward. Lightweight long span truss floors detached in the ensuing wreckage fire, and creep allowed the columns to transfer loads. The most highly-stressed columns passed their point of buckling stability, and failed. The tower tops had enough momentum to bring about catastrophic collapses. The bottom face of each steel and rubble pile, against ground zero, was heated by kinetic energy transfer.

Staff member
It's been six years since this documentary. I wonder if any of the others changed their minds at all. 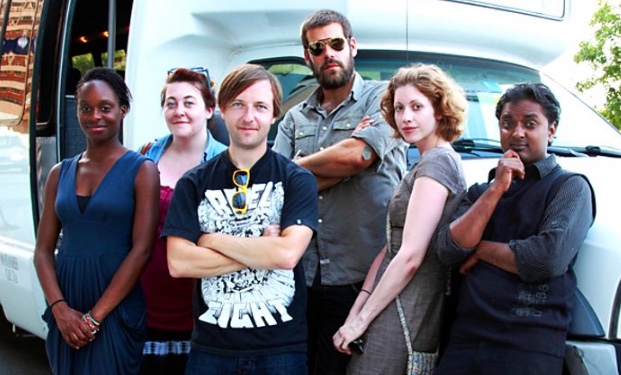 Charlotte, a North London nanny who witnessed the attacks, thinks the American government is responsible. She can't believe the hijackers, barely out of flying school, could have steered jetliners into the Twin Towers with such deadly accuracy. Rodney a health worker who studied biochemistry suspects the collapse of the towers was not caused by the planes that went in to them and he wants to get to the bottom of the science. Student Emily, an active member of the 9/11 Truth Movement, thinks the US government was forewarned of the attacks and yet ignored the intelligence allowing it to happen. Shazin wants to find out how the passengers on United 93 could have made phone calls to loved ones from a plane. And Charlie, an ex-banker thinks 9/11 was an excuse for the US Government to go to war with Iraq.

From Emily's blog it seems like she was already moving away from the hardcore "truth" movement back in 2011
http://911truthnews.com/911-conspiracy-roadtrip-a-participants-perspective/


They also did a great job at making it seem like I believed most of these theories. I’ll freely admit that before I went on the show I was a “9/11 was an inside job” sort of girl. Hell, I even have a t-shirt from infowars.com. Yes that’s right, I knowingly gave money to Alex Jones.

Before I went on the show I had an epiphany of sorts. I realized that all evidence points to a plane hitting a Pentagon, that maybe the twin towers and Building 7 weren’t a controlled demolition and maybe Dick Cheney and co hadn’t plotted the whole thing with fake hijackers. Now I don’t know what is true and what isn’t. I am not 100% convinced about controlled demolition but it is a distinct possibility. I just decided to focus on the other, less spoken about side of 9/11. The fact that with multiple warnings, the US failed to prevent an attack on their own shores.


Rodney Chavrimootoo left an annotation (11 April 2012)
Hi, I was in the show and I'm glad that this request was made. I really want a copy of this footage too, for the very same reasons. The issue seems to be that the show falls under the category of journalism as it is labelled as a documentary.However the documentary is more akin to a reality tv show, rather than any orthodox, regular documentary. What is not considered to be 'journalism, art or literature?' This is a very broad term and the clause was probably created to allow the BBC to hide things where their actions can be considered questionable.

Was me chatting to my mum on the phone really journalism? Really? This wasn't journalism. We were told what to say and directed like actors. That's not journalism.

But a brief search fails to find anything recent.
You must log in or register to reply here.