I posted the following comment on Geoengineering Watch on a thread titled "Geoengineering Disinformation Sites." It lasted less than four hours. Ironically, the article accused the debunking sites of censorship..

(Have a screen shot but can't transfer it.)

I respect Dr. Blaylock's views on how bad geoengineering would be if it existed. He is an M.D. But he provides no evidence that chemtrails really exist, other than casual observation. Persistent and spreading contrails have been documented since world war II--Google Memphis Belle 1944--and in the scientific literature since at least 1970. Google Journal of Atmospheric Science, 1970. My experience has been that the debunking sites are the most open, and the alarmist sites most censored. We will see how long this comment lasts.

I made a comment too. Even the fact that they have been forced to speak of charts and graphs means they are running scared. Just our dissident actions have forced their hand and compelled them to speak about that which they formerly ignored.

Jay Reynolds said:
Hi, Mauro.
You speak of “geoengineering disinformation” websites, but fail to point out exactly which sites these are, and why you feel that these “charts and graphs” you speak of are not correct!

Yes, this article is not information at all, it is nothing more than simply more disinformation, a failed and desperate attempt to control and stop the flow of information.

These “charts and graphs” which you fear so much consist of information which is ever more available to anyone who ignores your plea to avoid looking at.

Stop playing the North Korean model of censorship, just address these charts and graphs, ‘man up’ and let your readers decide like you say they should.

You will eventually be forced to do so, and you know it.
Click to expand...

I have never seen any evidence that aluminium of any kind is sprayed from aircraft – as yuo say it could well be a major health hazard.

But all the evidence supposedly saying it is happening that I have seen refers to soil and water, which is silly since soil has a lot af aluminium in it already, and no effort is ever made to show that teh aluminium in tests comes from aircraft.

So if you have actual evidence of spraying – tanks on aircraft, doctored fuel or similar, documents showing the manufacture and distribution of the substance, systems onboard aircraft for dispersing it, etc., could you please make them public so the general population can know specifically what it is that is being done?

Jay, MikeC - i didn't see either of your comments at that web site. I guess they removed them.

I see on that website that they are in cahoots with my favorite youtuber "Dutchsinse", or at the least they are promoting his "HAARP" angle on the conspiracy. When the censorship becomes particularly blatant, that leads me to believe that a deliberate scam is being perpetrated (association with websites like "naturalcures.com" pushes my suspicion further in that direction). I can understand censoring offensive, violent, or even accusatory posts/comments. However, when plain facts are being deleted at every turn then I am left to believe that the operator of the page knows that they are incorrect and do not care. They have something to sell and will not be stopped.

I noticed this article at the top of their main HAARP page. I thought I'd note it because it shows how sloppy and obviously bogus their brand of disinformation is, and to shed some light on Geoengineering Watch's lack of integrity. That article was first published on Pakalert Press (where a polite comment I made didn't make it past the moderator), however GW doesn't credit the original author Terrence Aym or PP.

Researchers, worried about the weaponization of the global High Altitude Atmosphere Research Program (HAARP) network, suddenly have much more to fear. The Russians, Chinese, and Americans are racing to power up their Antarctic HAARP facilities and bring them online. Once the newest HAARP stations are fully activated and linked into the intricate HAARP grid, the power can be exponentially expanded. Forget nuclear arsenals, HAARP could become the most fiercesome force on the planet.
Click to expand...

I just wanted to highlight a couple of glaring instances of bunk. The first is an error in the HAARP acronym. HAARP is the High frequency Active Auroral Research Program, NOT the High Altitude Atmosphere Research Program as the article states. Like I said in my comment on Pakalert, if you're going to make up stories about HAARP at least get the acronym right. In addition, the article tries to make it sound like HAARP is the technical term for any ionospheric heater and that all IH's are part of some "HAARP network" when in fact it's simply the name of a specific research program associated with a specific phased array ionospheric heater located in Gakona, Alaska. It's really just another pathetic attempt to turn the name HAARP into some ominous catchphrase of conspiracy and doom.

The other instance of bunk is an attempt to pass off an image of the Vela Pulsar taken by the Chandra X-ray telescope as HAARP with a caption that states: 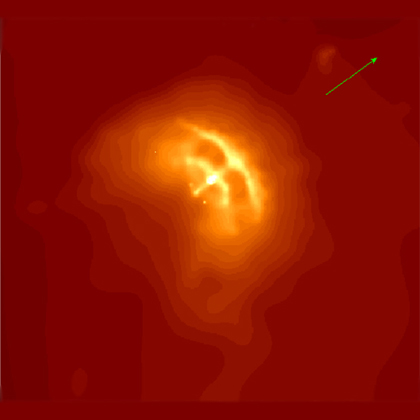 The real caption is:

Credit: NASA/PSU/G.Pavlov et al.
Chandra image of compact nebula around Vela pulsar. The image shows a dramatic bow-like structure at the leading edge of the cloud, or nebula, embedded in the Vela supernova remnant. This bow and the smaller one inside it, are thought to be the near edges of tilted rings of X-ray emission from high-energy particles produced by the central neutron star.
Click to expand...

It is incredible energy because it's a PULSAR located hundreds of light years away.

Of course Geoengineering Watch is going to embrace another disinformation and censorship artist like Dutchsinse, they're all cozy like peas in an underground doomsday pod.
Last edited by a moderator: Nov 20, 2013

Staff member
That article is not simply bunk, it's a pack of lies. Look at this: 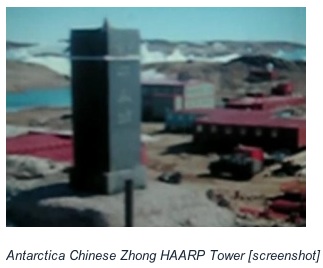 Looks like a big scary tower looming over the trucks and buildings, right?

Ten seconds of research finds this: 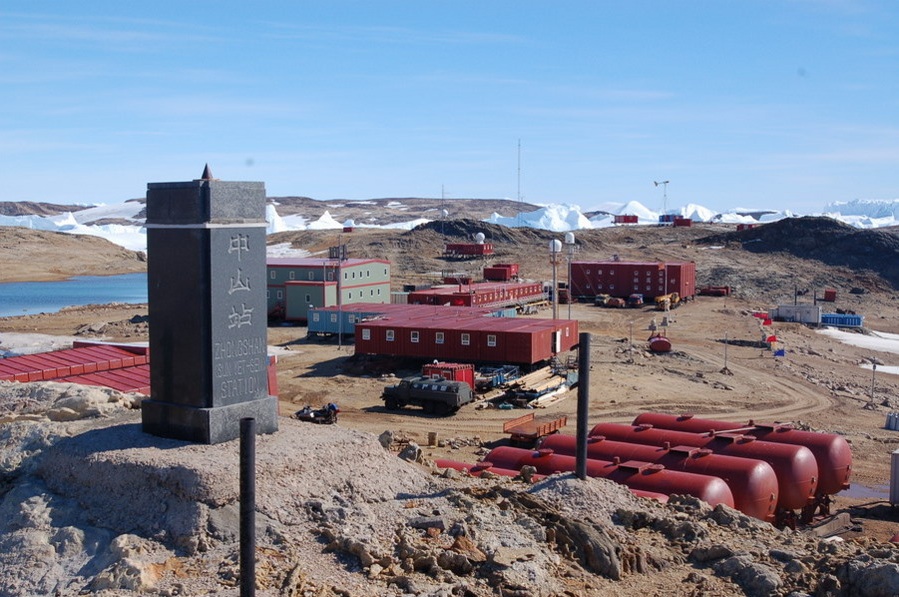 It's just a stone marker (a trig point), a few feet high. Someone just took that photo, cropped it and blurred it. You can tell by the evenness of the blur that it was applied deliberately. This is a fabrication, pure and simple.

Mick said:
That article is not simply bunk, it's a pack of lies. Look at this:
Click to expand...

This is a deliberate hoax, no doubt it was intentionally done.

Likely there is more bunk in those other "screenshots". Interesting way to hide a hoaxed image, to blur it and falsely call
it a "screenshot".

Maybe geoengineering watch didn't author the hoax, but it is clear they bought into one.

Mauro Oliviera should be ashamed, he is such a lamer.

The article also has the following picture of what it claims is a high energy vortex splitting the sky. 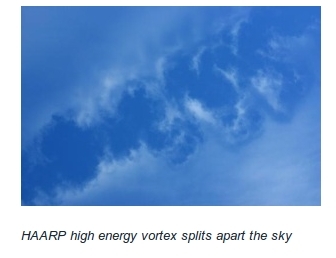 The picture is really that of a distrail and is featured on contrailscience.com (of all places)

It can also be seen here:

Staff member
Ha! I thought that photo looked familiar. It was so obviously a distrail that I didn't even both tracking it down.

It seems they are just repeating nonsense from elsewhere. Perhaps the original was a deliberate hoax - but it is rather telling that people would repeat such things unquestioningly.

It looks like whoever perpetrated this hoax just grabbed images from anywhere, and either had no idea how easy google image search reveals the origin of their images. The globe image is feaured on many new ager websites as showing "earth grids" "ley lines", and "crystal lines", not a "HAARP resonance high energy global network".

Mauro, you buy into the most silly hoaxes.

At the risk of going off topic, I decided look into more of these pictures.

The hoaxer, Terrence Aym, is a prolific contributor to Before it's News. He's spent the last 2 years writing about the Bermuda Triangle, secret moon bases and the 9/11 attacks resetting time.

Many of these articles seem to have suspect photographs. Here are a few of my favourites:

In this article about a UFO appearing beneath the space shuttle Atlantis during the STS-80 mission, there is a picture with a caption that reads, "Strange alien craft follows STS-80". The picture is attributed to NASA ISS. 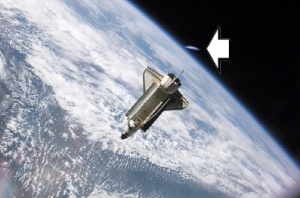 The original NASA photograph is of STS-115 not STS-80. The strange disk shaped object? Missing of course. 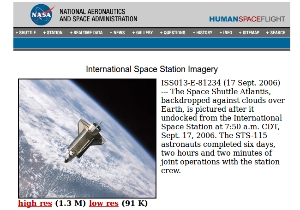 In another article called Masters Of The World: HAARP Wars there's a picture of "russia's newest HAARP facility". 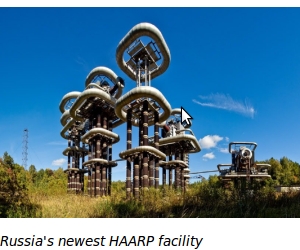 Russia's newest HAARP facility is really a bunch of abandoned High Voltage cascade transformers from a site near the city of Istra. The picture originates from this guy's 2007 travel blog. 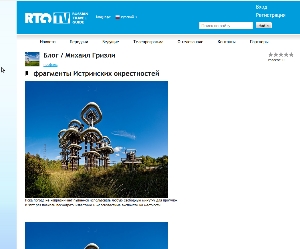 Lastly there's this one from the article Physicist: HAARP Manipulates Time where we have an energy vortex warping a cloud. 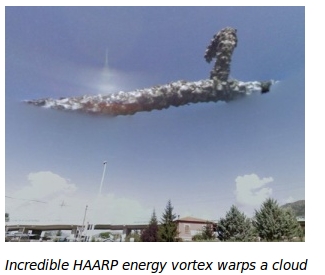 Here is the original Google Streetview image. The consensus is that it's a tree branch.

It's some kind of twig or branch that fell on the Googlemobile camera.

Here is a map of the path the Googlemobile traveled. It traveled from box A to box E. Box E is the location of the photo in question.

The debris is not present at Box A. It first shows itself in box B. I would say something in the trees fell onto the lens.
View attachment 556

Postions C and D show this isn't up in the sky. It's something on the lens.
View attachment 557

Box E is the location of the photo in question:

Here are the links to the positions depicted: