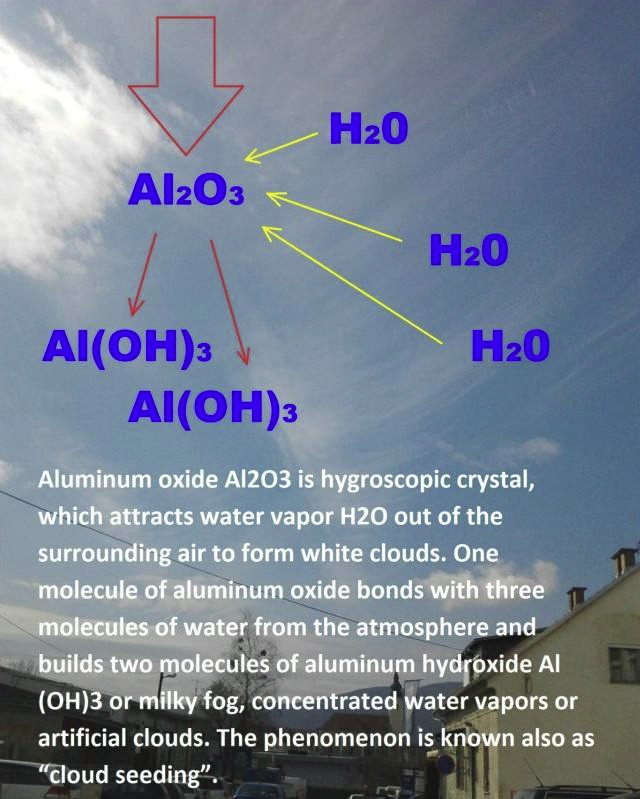 I believe the first problem here is that while their chemical equation is balance, Al203 will not react with H20. Aluminum oxide is insoluble in water.

It seems like this "Aluminum Oxide" seeds clouds is becoming the meme in chemtrail circles - probably because some of the promoters have discovered that the ice budget argument holds water.

It would be handy to have a concise debunking of this.

Look at relative masses of their reactants

Virtually all the aluminium hydroxide used commercially is manufactured by the Bayer process[5] which involves dissolving bauxite in sodium hydroxide at temperatures up to 270°C.

Content from external source
One of the by-products of this is the "red mud" that was a disaster in Hungary when storage facility dam burst in 2010.

also according to that article the hydroxide can be dehydrated and there is no mention of it being formed by hydration such as the picture suggests.

But the basic debunking has to be that Al2O3 is insoluble and not hygroscopic at all - the reaction is simply impossible!

Edit: I wonder if they are getting confused by an article like this one about Aluminum Oxide-hydroxide powder, where it says that:

Both materials are highly hygroscopic. To avoid degradation of the material properties, do not expose it to humidity.

Content from external source
and it notes that the powder is made up of:

Content from external source
Are they looking at this and suggesting that "both materials" = the Al2O3 and the hydroxides??

whereas I read it as saying that "both materials" refers to the 2 forms it commonly comes in:

This says it is hygroscopic. That's not the same as reacting with water though.

OK - my misunderstanding of hygroscopic - I assumed it meant absorbing water by a chemical change.

activated alumina is aluminium oxide with a highly porous structure (as opposed to the crystalline structure as used in abrasives for example) - it is used as a desiccant that absorbs water into its physical structure without undergoing any chemical change as far as I can see.

What's would be the point of creating clouds of aluminum hydroxide?

Matthew Clin said:
What's would be the point of creating clouds of aluminum hydroxide?
Click to expand...

Generally, the proponents of that gambit are saying:

The more they spray, the less rain will fall. Period. The science to back up this statement is undisputed in regard to the effects of an atmosphere that is saturated with particulates. Rainfall is diminished and dispersed. To many “condensation nuclei” keeps the water vapor from combining into large enough droplets to fall as rain, thus precipitation greatly reduced or eliminated all together. (search “geoengineering aerosols cause drought”). Clouds that would have produced regional rain are blown apart by the aircraft sprayed particulates into vast featureless dirty looking canopies now “artificially altered” and mostly rainless cloud cover that at times stretches over multiple states. In addition to the drought causing effect of excessive condensation nuclei, there is the problem of diminished evaporation due to the reduction of sunlight also caused by SAG (stratospheric aerosol geoengineering) and SRM (solar radiation management). And lets not forget the reduction of wind, still further reducing evaporation , also a consequence of the ongoing global spraying of our once blue skies. (search “atmospheric aerosols reduce wind and rain). ‘
http://www.geoengineeringwatch.org/geoengineering-and-global-drought/
Click to expand...

Previously, I did some basic calculations looking at claims that barium hydroxide, also a dessicant, would dry up rain over a single county. Here were the figures which quickly become absurd:

A predicted 3” rain in Siskiyou County, California, was dried up by jets spraying barium, which is a desiccant.

http://www.blogtalkradio.com/finteg...rphy-and-g-edward-griffin-chemtrails-revealed
This is not the only time Murphy has referenced this claim. In his Youtube video, “Hawaii Revisited”, he said:

Is Murphy’s claim plausible, or not? He is obviously unfamiliar with chemistry and aviation, and his comments also show that he doesn’t actually know anything barium. This is odd, especially since he has been making claims about barium for years.

What would be required to use barium oxide as a desiccant sprayed from an airplane to “sequester” a 3” rain down to a ½” rain?

First, we are trying to subtract a 3” rain minus ½”, so that equals 2 & ½ inches of rain. A 1” rain falling over one square mile yields 17.38 million gallons of water:
http://ga.water.usgs.gov/edu/earthrain.html

Now for the chemistry, remember high school, folks? Maybe Michael slept through this one…..

Conclusion: Michael J. Murphy’s claim that jets spraying barium(oxide) could have reduced rainfall by 2 & ½ inches over Siskiyou County would require 3369 flights of 747 cargo class jets. The claim is quite simply preposterous. This example is just one of many in which people who believe in chemtrails appear to simply repeat what others say with no proof or rational examination whatsoever.

Murphy's statement that, "Its hurting people, its killing people, and many people have died from this. What do you think people would do if they found out that there might be corporations behind their incredible losses?”, sounds like a provocation. He bears the responsibility for these statements, because besides being baseless, they are very reckless to make towards his target audience of known gullibles.

Jay Reynolds said:
Generally, the proponents of that gambit are saying:

The more they spray, the less rain will fall. Period
Click to expand...

I think this is strictly for local consumption there in the western US which has been dry for a few years. What about the verdant eastern US? Francis Mangels of Mt. Shasta, CA has claimed that, "they are stealing our rain", and that half a continent away somehow they are able to get the rain to fall after being absorbed. He didn't get into details about how that was done, he's not much into details, actually.
Last edited by a moderator: Nov 20, 2013
You must log in or register to reply here.
Related Articles
Parents who teach bunk to children
J.Marvin Herndon tries to pass off Bird Poop as evidence of "chemtrail" spraying
Bunk Archeology: Barium in Jet Fuel Additive Stadis 450 [There Isn't Any]
On Herbalism, Crystals, Bunk and the Rabbit Hole
Debunked: Newtown Bee removing article links related to Sandy Hook citizen investigations
Conspiracy Theories, Bad Reporting, Bunk, and the Malheur Militia Incident in Burns, Oregon
Amazon bans SH conspiracy book
Using comedy to reverse, or promote bunk
Is Windchill Bunk?
"Pyramid Power Plant" Debunked
What to do when family members believe in bunk ?
Bunk: SyFy: Aliens on the Moon
Debunking just makes people believe the bunk - 'motivated reason'
Senate Resolution 221. Naturopathic Medicine Week. Bunk gets unanimous Senate vote.
Practical bunk used to debunk
Claim that modern hybrid wheat is lacking in nutrition--True or bunk?
Who's bunk here? FOX News Reporters or Monsanto?
Bunk you are willing to live with?
Have any debunkers created bunk to discredit bunk believers?
Hello, a discussion about memes and their influence on bunk.
Just Like Gun Bans, Forced Smart Meters Is Just Bunk Right?
Jesse Ventura Letter: Is This Bunk?
FCC Complaints if bunk is knowingly transmitted
Dead Blackbirds Fall From Sky, Prompting Bunk
Debunked: "Hygroscopic Smoke" Produces Persistent Contrails
Identified: Art Bell's "UFO" Aluminum Louvered Sheets - Heat Exchanger Fins
Very Fast Soda Cans Hitting Things - Work in Progress
Debunked: AE911Truth's Analysis of Slag Residue from WTC Debris
Melting Aluminum in "Open" Fires, Like in the World Trade Center on 9/11
Aluminum in rainwater, normal levels shown in FLorida 1983
Ulrike Lohmann on aircraft exhausts chemicals
Why "Chemtrail" Tests on the Ground Find Metals That Don't Occur Naturally
Do factories produce aluminum to the air?
Aluminum in Hepatitis B Vaccine
ASTER satellite data of Aluminum on the surface of the Earth
Aluminium concentrations
Mick West Interview for "Overcast" documentary by Dedal Films
Aluminium value in rainwater
Aluminum in the United States, Prevalence in Soil and Water
Electrical conductivity of atmosphere before/after "spraying"
Aluminum, Barium, and Strontium in Fireworks
Aluminum-Water Explosions Theory of Collapse, Christian Simensen
Aluminum Extractor
Cloud Seeding, Geoengineering, Detecting nano-aluminum?
aluminum in the soil?
Aluminum Theory's Debunking Tips.
"Natural News" and aluminum falling from the sky......
peer reviewed research on aluminum content of rainwater required
New Video-Series on YouTube: "Chemtrails DEBUNKED - Aluminum Edition"
Normal and Toxic Levels of Aluminum in Blood Serum
Share:
Facebook Twitter Reddit Pinterest Tumblr WhatsApp Email Link