The classmates -- Azamat Tazhayako and Dias Kadyrbayev -- are both from Kazakhstan and had been in federal custody on immigration charges already, their lawyers told CNN. The third person arrested is a U.S. citizen.

The Kazakh students face charges of making false statements to investigators and conspiracy to obstruct justice, according to a federal law enforcement source with firsthand knowledge of the investigation.

No details of the charges against the third person were immediately available. But Alan Dershowitz, a prominent defense attorney and Harvard law professor, said the new charges don't appear to be related to the bombing itself.

"If they knew about the bombing, if they were involved in the bombing, the charges would be conspiracy to do the acts for which the other man has already been charged," Dershowitz told CNN. "So it sounds like at this point in time the only evidence they have is actions that took place after the bombing." 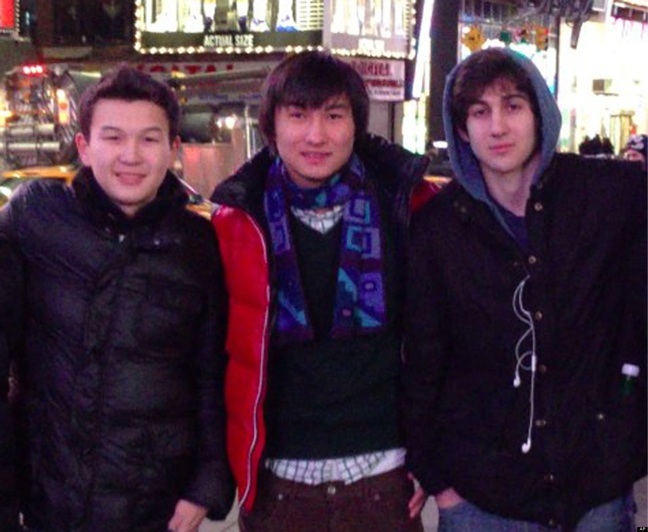 Does not really look like they are really related to the bombing, just immigration problems.


They will be charged with lying to federal investigators for denying they took the items from the dorm, federal authorities said.

There was no indication the three men, who have ties to the University of Massachusetts-Dartmouth, had any prior knowledge of the bombing.

Most likely they took their weed out of the room. But I guess we should wait and see.


Kadyrbayev and Tazhayakov are suspected of taking computers and other equipment from Dzhokhar Tsarnaev's apartment and trying to dispose of it after the bombings, sources told Fox News.

Yes, from what I've read so far, it appears to be that they 'helped' the primary suspect after the bombings. Whether that means they sheltered him or whatever remains to be seen. I suppose it will be some sort of criminal conspiracy charge or something. But the media hasn't reported anything (so far) that indicates these people were involved in any way with the actual bombings.

Staff member
Possibly they just took their own computers out, to avoid having them seized by the FBI. Rather foolish, with hindsight.

I fully expect the conspiracy talk to start gearing up considerably as a result of this. After it was revealved that Dzhokar Tsarnaev's mother was apparently recorded by the Russians discussing jihad with his brother, people are now assuming she is some sort of anti-American jihadist and is wrapped up in the bombings (read any of the comments on the Yahoo! news stories about the bombings if you dare). Add to that the fact that she is grieving for her dead son and her imprisoned son and, like many a parent, doesn't think her children would ever do anything like this and you have more "evidence" that she's a lying bitch who hates America who somehow knew about this plot all along. I've heard that the dad apparently wears sunglasses because he's hiding something - I assumed he was hiding the fact that he's probably been crying a whole lot.

Three new suspects will really add fuel to the fire. What will be interesting is to see how these fit into the 'false flag' and 'Boston was an inside job' narratives. More patsies I suppose?

"Most likely they took their weed out of the room. But I guess we should wait and see"

Agreed....these boys are in a lot of trouble.Sadly, I don't think they realized the severity of the situation. I hope they have good lawyers.
P

Federal district courts cover districts within states, not states. There are 94, and many states have just one. This district is called Massachusetts.