APRIL 5, 2020 / 10:34 PM
British Prime Minister Boris Johnson was moved to an intensive care unit on Monday after his coronavirus symptoms worsened, but his Downing Street office said he was still conscious.

Britain has no formal succession plan should the prime minister become incapacitated, but Johnson, 55, asked Foreign Secretary Dominic Raab to deputize for him.

Johnson was admitted to hospital on Sunday night and had been undergoing tests after suffering persistent coronavirus symptoms, including a high temperature, for more than 10 days.

If Johnson dies or is unable to continue as Prime Minister, then this is very significant news. So far I've seen a few conspiracy theories suggesting that this was the reason for the Queen's speech yesterday.

He's 55, seemingly no existing health issues other than being overweight, which seems to be a significant risk factor.
https://www.theguardian.com/politic...ssion-puts-new-focus-on-boris-johnsons-health


While Johnson is not known to have any underlying health conditions, he has been open about his struggle with obesity – a known risk factor for coronavirus.

According to a report published last week, more than 70% of patients placed in intensive care after being infected with Covid-19 were overweight, obese or severely obese on the body mass index scale.

In December 2018, when Johnson was foreign secretary, he said in the Spectator that he weighed 16 and a half stone, which at 5ft 9in would have put him in the obese category. Johnson has lost weight since then, but it has fluctuated significantly throughout his political career.

Mick West said:
So far I've seen a few conspiracy theories suggesting that this was the reason for the Queen's speech yesterday.
Click to expand... 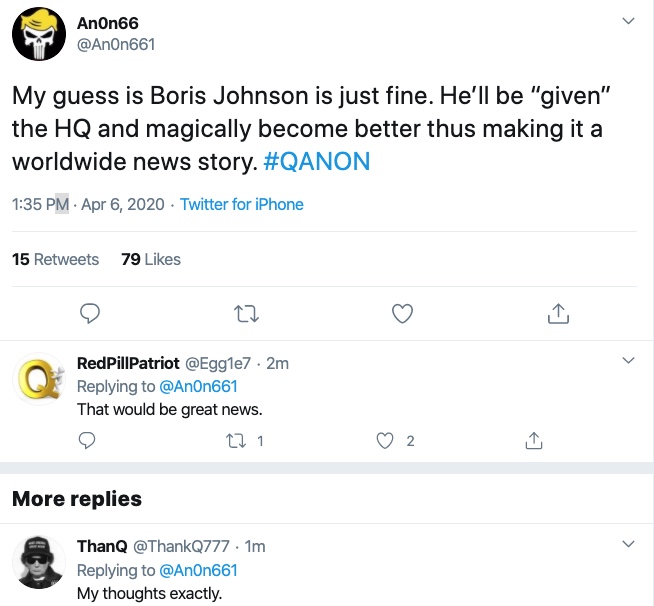 
Obviously I wasn't looking hard enough. But the QAnon people are so quick to fold everything into their grand conspiracies that it's hardly worth reading them. Here they seem to think Johnson's hospitalization is something to do with a hoax involving Hydroxychloroquine. 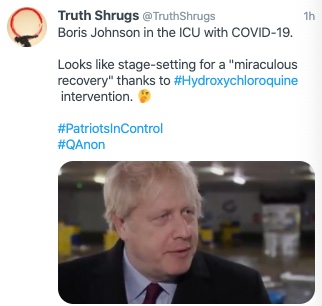 Or that he's being assassinated: 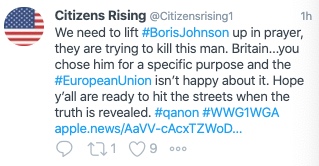 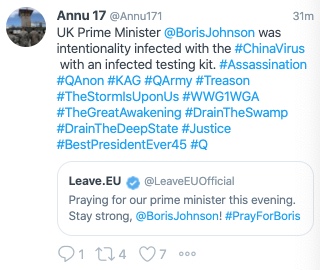 Ha! So if he gets fine on his own - or dies - or gets better with medication - or is found to have contracted corona from a testing kit - or goes into a coma - or has to leave office because of some subsequent problem - or any other outcome -

They're all confirmation of the conspiracy?

He is out of danger and discharged

LONDON — Prime Minister Boris Johnson of Britain was discharged from the hospital on Sunday, a major step forward in his recovery from the coronavirus and a welcome relief for a nation whose political leadership has been harder hit by the contagion than that of any other Western country.

Mr. Johnson, who spent three nights in intensive care at St. Thomas’ Hospital in London, will convalesce for some time at Chequers, the prime minister’s country house, the government said in a statement. But he will soon be able to sign off on major decisions, including when to ease the country’s lockdown.

In an emotional five-minute video, Mr. Johnson thanked the country’s National Health Service, declaring it had “saved my life, no question.”
Click to expand...

I saw someone share a link to this TruePublica blog post: Editor at The Economist: ‘Something fishy’ about Boris Johnson’s intensive care stay


In summary of the basic timeline, we can say – the PM was suffering symptoms of COVID-19 for ten days, self-isolated for seven days in the No 11 Downing street apartment and was rushed to hospital on the 11th day. Two days later his condition is so bad he is sent to intensive care where he spends another four days. Two of those days according to Boris Johnson himself were critical and ‘it could have gone either way.’ This presumably meant that at some point, living or dying had become a 50/50 chance. Two days after leaving intensive care, he leaves hospital

4.29pm 12/04: Deputy political editor at The Times reports that – “Boris Johnson has left hospital and is now recovering at Chequers. On the advice of his medical team he will not be immediately returning to work. He thanks everyone at St Thomas’ for the ‘brilliant’ care he has received.”

Some criticism is bound to fly about that Johnson then went to Chequers, 40 miles away – but then again, he is being told to convalesce and get back on the road to recovery. It is also a fact that the PM should not be in Downing Street where he could still infect others. Just because his breathing has stabilised and is able to leave hospital, does not mean he is not COVID-19 positive and not infectious.

There is speculation on social media that the PM’s fiance Carrie Symonds, who is pregnant is there waiting at Chequers for him. If this is true, the story goes wrong and speculation will escalate.

At 6pm on the day the PM is released from hospital and only two days from leaving intensive care where breathing was a life or death issue, Boris Johnson makes a full unbroken 5-minute speech to declare that – “the NHS had saved my life – no question. It hard to find the words to express my debt.” Not once does the PM seemingly struggle to pause for an extra breath in an address to the nation, a rallying call to continue the ‘battle that we all face.” He sounds exactly the same as any other lengthy pre-written speech delivered by autocue.

6.37pm 12/04: Chris Lockwood, the Europe Editor of the Economist publicly states – “This is not someone who was at death’s door a few days ago. Something incredibly fishy about the whole business.”

It does seem odd that only two days after a fairly lengthy spell in an intensive care unit with a high degree of respiratory distress during which time it was thought the PM might need respiratory ventilation and could die at any moment, is sent home and can make a full speech and is miraculously cured.

I have spoken with a senior consultant NHS doctor who tells me that it is highly unlikely that most people would have recovered quite so quickly, but certainly not impossible – but if his pregnant partner is there with him in Chequers – that does seem like a strange thing to do. No doctor would ever recommend that unless another test had confirmed otherwise.

To summarize the timeline:

All together about 17-18 days between first symptoms and giving the speech. While we have heard cases of people being on ventilators for 10-15 days, that is more likely to be most severe cases or people with preexisting respiratory conditions. Boris (who doesn't have a known preexisting respiratory condition) was in the ICU for 4 days and then monitored for 72 hours. That seems about right for someone who is otherwise healthy.

WHO says that mild cases run their course in approximately 2 weeks, and more critical cases in 3-6 weeks. Boris being sick for 2 1/2 weeks is normal.


Using available preliminary data, the median time from onset to clinical recovery for mild cases is approximately 2 weeks and is 3-6 weeks for patients with severe or critical disease. Preliminary data suggests that the time period from onset to the development of severe disease, including hypoxia, is 1 week. Among patients who have died, the time from symptom onset to outcome ranges from 2-8 weeks.

We also don't know if or when he started taking a treatment like Hydroxychloroquine when he arrived at the hospital with severe symptoms. According to the limited (non-peer reviewed) Chinese study that took place, patients started seeing a significantly shortened recovery time for symptoms of cough and fever (around 5 days). That would be pretty consistent with his recovery period.


Zhan Zhang, MD, of Renmin Hospital of Wuhan University, Wuhan, China, and colleagues reported results from 62 patients randomized to receive either placebo or hydroxychloroquine 200mg twice daily for 5 days on admission in addition to standard treatment consisting of oxygen therapy, and unspecified regimens that could include antiviral and antibacterial agents, and immunoglobulin with or without corticosteroids.

"The data in this study revealed that after 5 days of hydroxychloroquine treatment, the symptoms of patients with COVID-19 were significantly relieved, manifesting as shorten(ing) in the recovery time for cough and fever," Zhang and colleagues reported.

As for Johnson's partner, she too had COVID-19 symptoms, last week, though I'm not sure she is still ill, or will even be staying at Chequers right away during Johnson's recovery. There's a possibility she developed immunity, but it's unclear at this point if people can become infected twice.


LONDON (Reuters) - Carrie Symonds, the pregnant fiance of British Prime Minister Boris Johnson, said she had spent the past week in bed with symptoms of the novel coronavirus but after seven days of rest felt stronger and was on the mend.

“I’ve spent the past week in bed with the main symptoms of Coronavirus. I haven’t needed to be tested and, after seven days of rest, I feel stronger and I’m on the mend,” Symonds said.

It was reported that Johnson was tested negative for Coronavirus before his discharge from hospital.
https://www.thetimes.co.uk/article/...kes-time-off-after-testing-negative-vssgm7229


It emerged today that Mr Johnson tested negative for Covid-19 before he left St Thomas’ Hospital in central London yesterday to begin his recovery at his official country retreat. His spokesman said it was standard practice to ensure that patients were clear of the infection before they were discharged.

Presumably after a negative test he is not considered infectious.
I wonder if the same people who are now saying the whole thing looks 'fishy' were among those who eagerly reported that he looked and sounded terrible in the week before he went into hospital, and wasn't taking the illness seriously enough. Boris really can't win: short of actually dying, there will always be some people saying it was fake, or he was getting preferential treatment, or whatever.
Last edited by a moderator: Apr 14, 2020

Arugula said:
According to the limited (non-peer reviewed) Chinese study that took place, patients started seeing a significantly shortened recovery time for symptoms of cough and fever (around 5 days).
Click to expand...

IIRC it cut off about a day on average?

And if we're talking about the same study, weren't the patients treated while the symptoms were relatively mild, and only the control group had severe symptoms?
I don't think we should speculate on how BJ was treated, if it isn't reported; and from what I know, the timeline doesn't feel unusual to me, so any claims that it is unusual I'd like to see backed up with evidence.

Arugula said:
At 6pm on the day the PM is released from hospital and only two days from leaving intensive care where breathing was a life or death issue, Boris Johnson makes a full unbroken 5-minute speech to declare that – “the NHS had saved my life – no question. It hard to find the words to express my debt.” Not once does the PM seemingly struggle to pause for an extra breath in an address to the nation
Click to expand...

People always say things like "if it wasn't for x, I would've died". Cycle helmets, healthcare, car accidents, near drownings. They don't really know if it's true, it's just a turn of phrase, an overdramatisation. If he wasn't on a ventilator, I doubt he was at death's door, and far from 50/50. But it makes a better story if he paints it that way. And I'm sure it probably feels true to him as well.

[ALERT=moderation]
General Covid-19 related info should be in the main Covid thread.
[/ALERT]
You must log in or register to reply here.