I was hoping to find an explanation of the "black square around the Earth" so-called 'proof' the Flat Earthers put out.

Basically, he takes a photo of the Earth taken from a moon mission, zooms in, plays with the photoshop filters, and gets a "black square" around the Earth: 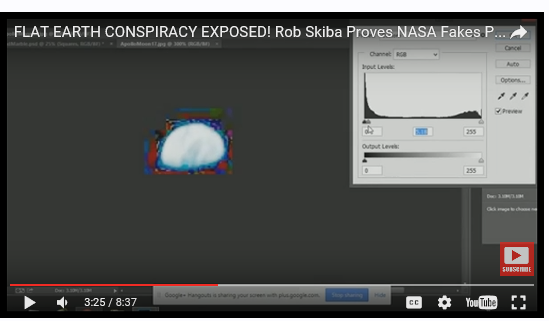 I've read that official modern images of Earth are often placed on black backgrounds - Blue Marble II, for example - but wonder what the explanation for this one is, given it was taken with film?

I downloaded a 3000x3003 copy of it from NASA and did the same thing in photoshop. Didn't get as much of a square - but did turn up what look suspiciously like stars!

Is it perhaps a case that what I'm seeing in my image is expected, and what he's seeing in his is perhaps as a result of using a lower quality image? And I wonder if those 'stars' would line up with a map? ;-)
Last edited: Jun 10, 2016

NoParty said:
I took a quick look at:
Rob Skiba "Faked NASA Photo" Debunked
which seems to address the semi-square pretty head on at [6:25]
Source: https://www.youtube.com/watch?v=dU9nEFeEPsc
[6:25]
Click to expand...

Nice one; that seems to sort it. And in the comments the very excellent Dave Ridlen has written a bunch that explains it further: basically, yes, Rob Skiba was using a low res image, and that there is an even higher res one available, clocking in at 4145x4145.

I downloaded that and the 'square' has pretty much gone:

Update: I checked the points of light to see if they were stars at astrometry.net - and they weren't.

Rory said:
Update: I checked the points of light to see if they were stars at astrometry.net - and they weren't.
Click to expand...

Probably cosmic rays.
You must log in or register to reply here.