"Behind the Curve" - Documentry on Flat Earthers

just to clarify this is not a FE documentary, but a documentary about FE'rs

I watched it with my wife - and she actually complained that it did not address the science, i.e. their actual beliefs/evidence - the focus being too much on the personalities

you did see all the main conspiracy traits on display (that have been discussed at length on Metabunk).

I won't do any spoilers, but they actually do conduct a couple of experiments, one using a 20k gyroscope, the other a laser and some placards with holes in spaced out over a 17mile(?) straight - and are quite surprised at the results!!!!
Last edited by a moderator: Feb 23, 2019

Staff member
It's worth watching. It does focus on the people, which I think is fine, as there's plenty of places you can find the technical details. It's got a good message about the need for respectful engagement. It's an interesting inside look at the community, complete with infighting. The popular YouTubers are treated almost like rockstars, and they all clearly see themselves as being special - or at least of being part of something special. So much so that they become stuck in their belief, largely because it would be such a negative thing for them to lose their specialness and their community.


"It feels great to be the underdog protagonist in a Disney movie. Everything you do is justified. When people mock you, well, that's because they are evil. When people try to prove you wrong, when they do prove you wrong, you quickly say: 'well there you go, there's the evil'. No one is Ursula in their own story" 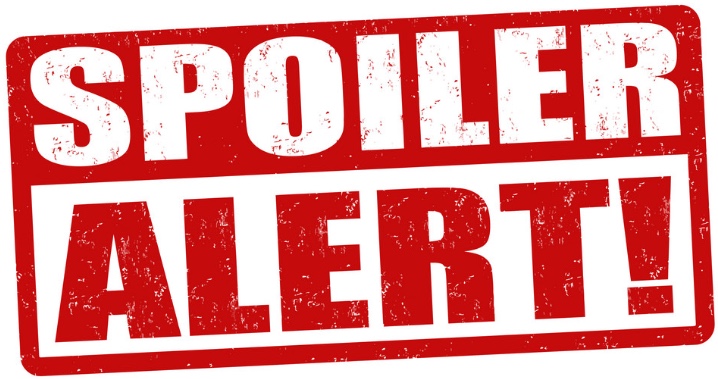 (they find 15° per hour rotation and try to first hide the results, and then explain it away)

And the experiment with the boards is @jeranism, again, demonstrating the curve. This has been brought up before.

The light is three miles away, giving a drop of six feet, which is what they find.

Of course, these results are rejected.

Here's a slightly longer version of the gyroscope clip, which is also quite illuminating:

Mick West said:
(they find 15° per hour rotation and try to first hide the results, and then explain it away)
Click to expand...

i don't currently have netflix so have to see snippets on review videos. In this clip the guy basically says that they have 20,000$ into the gyroscope, so they dont want the experiment to fail.
Source: https://youtu.be/WMrYo9CrxNI?t=944


this reviewer, who is a debunker i've recently run across, does warn us that the documentary is a 'hit piece' and warns viewers to be wary of editing techniques. 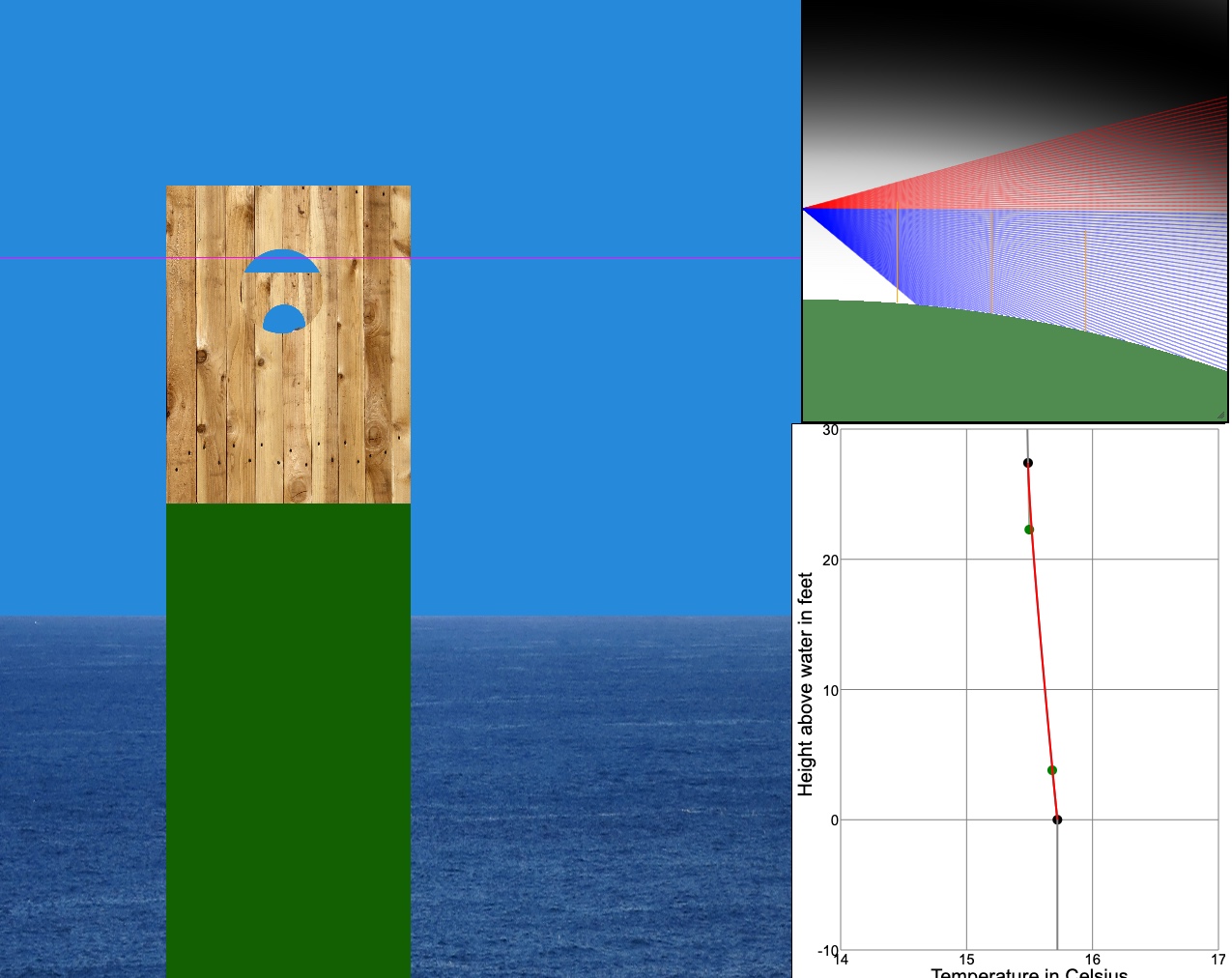 Offset a bit. The pink line is eye level. 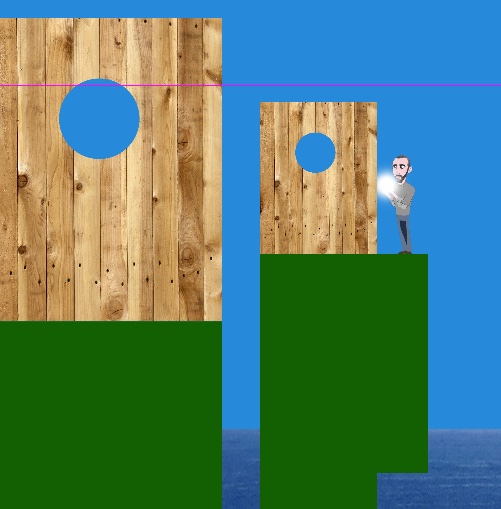 The Flat Earth view with no refraction is geometrically perfect with eye level, horizon, holes, and lights all lining up perfectly. 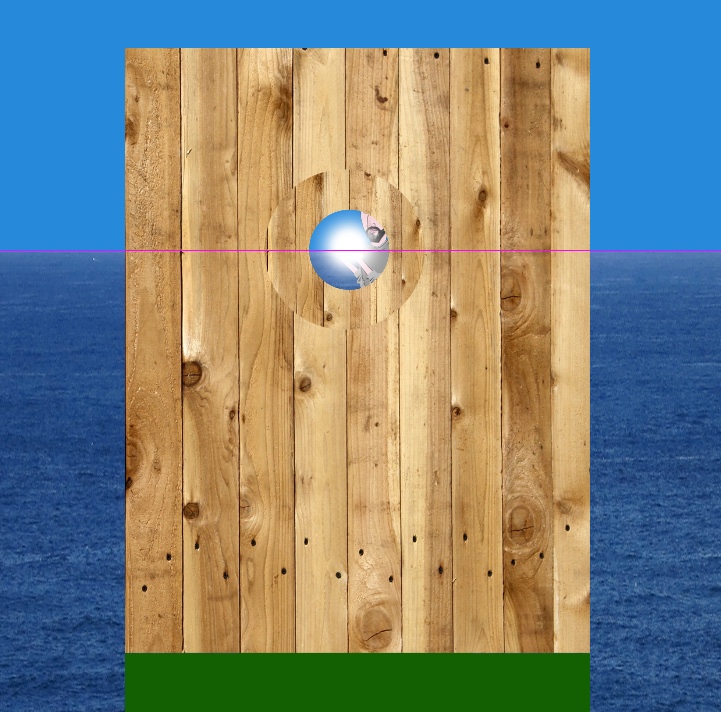 On the globe model it's still possible to have them line up with an unrealistically steep temperature inversion, but they are all significantly above the horizon. 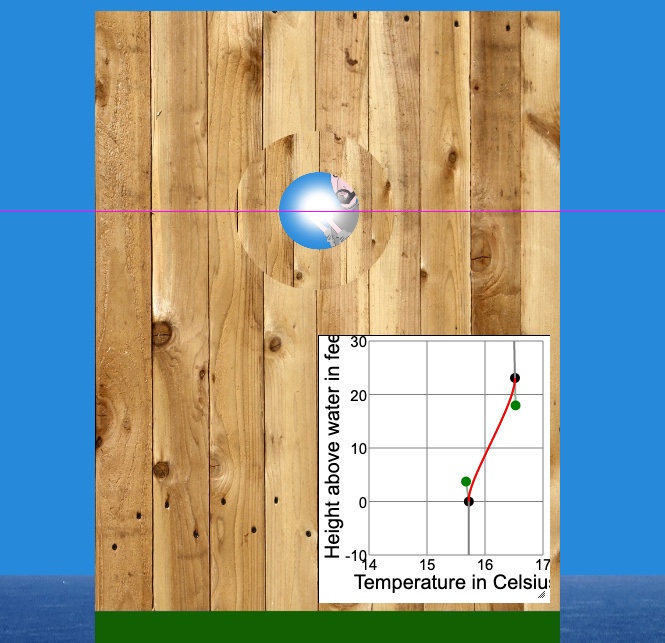 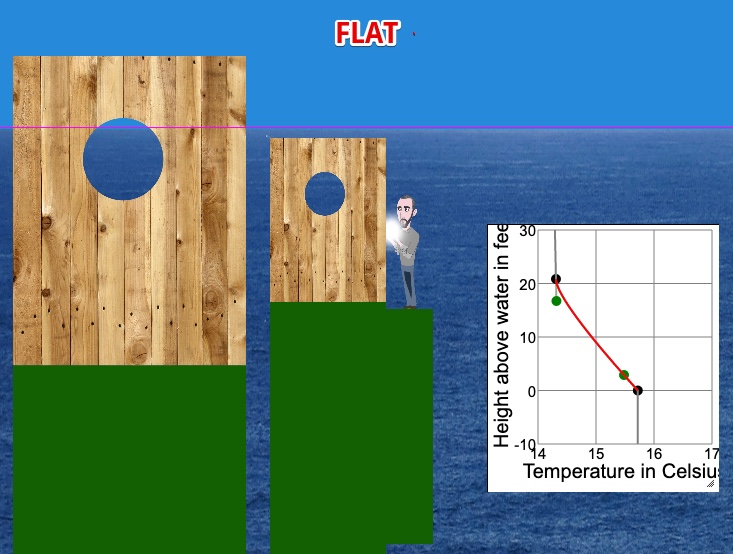 It's possible to simulate how the results might have happened on a flat earth, requiring an even more unrealistic temperature gradient. However, the position of the horizon is wrong.

Mick West said:
Of course, these results are rejected.
Click to expand...


where Bob goes into detail about the experiment, (at about 10 mins in) and criticise the production team (which could be fair comment tbh) but what is fascinating is that two other flat earthers turn up on the podcast (who have a different flat earth model - based on the "pacman model") and an argument ensues

although I seem to be having issues with The guardian video

if it does not display search for


@ Mick West - what interests me is, is flat-earth on the resurgence? or am I suffering from confirmation bias, because I seem to be seeing it much much more these days (and Metabunk addressing it)
Last edited: Feb 21, 2019

jeran is campanella?
this i think is the Patricia woman, and its interesting she says that after 'campanella''s laser experiment, the fecore group went to Lake Balaton "and had a sucessful laser test".


deirdre said:
this i think is the Patricia woman, and its interesting she says that after 'campanella''s laser experiment, the fecore group went to Lake Balaton "and had a sucessful laser test".
Click to expand...

Why on earth did they have to go all the way to Lake Balaton? There are hundreds of lakes in the US.

sadly I think I knew this!!!!! - has he commented on metabunk?

tadaaa said:
sadly I think I knew this!!!!! - has he commented on metabunk?
Click to expand...

Yes, he was banned for creating a fake account to promote himself. Here:
https://www.metabunk.org/observations-of-mallorca-island-and-the-earths-curvature.t9097/

Mick West said:
Why on earth did they have to go all the way to Lake Balaton?
Click to expand...

wasn't there something about Sandors saying lake Balaton "itself" was flat because of geo.. because of the rock the lake was on or something. remember that science forum he was posting in? I might be misremembering. But if i thought there was one flat place on earth and i wanted to prove Fe, that's where i would go too.
B

SPOILER ALERT, in case you've read this far and it's not spoiled yet.

Until Behind The Curve came out, I though I was only globe-head that showed up to see Jeran Campanella, YouTube's Jeranism, test for curvature of the surface of water in California's Victoria Canal on 25 Nov 2017. I like the film, and think it does a great job of presenting the one clear outcome of the experiment, but there are a couple points I'd like to clear up. Below is a report I wrote a couple days after, which contains some details the film omits, and quite a few that match dead on.


In the video at Globebusters, Jeran shows an illustration with four panels. That may have been the plan, but in the field there were three: one right in front of the laser (which I think is useless), one 1.5 miles down-range with a 6-inch hole 17 feet above the water-line, and one 3 miles down-range, with height-lines drawn on it (I assume; couldn't see it).

By the time I arrived the sun had set and the panel in front of the laser was up. Enrique got a volunteer, Steven, and they left to set up the down-range panels. I stayed at the laser location, as did Jeran and Daniel the camera-man. (Apologies if I have names wrong or misspelled.)

The laser with beam-expander, and the telescope mount that carried it, did not work. Jeran first adjusted the beam-expander with the beam hitting the ground. When Enrique got the 1.5-mile panel up, Jeran aimed the beam using a remote for the telescope mount. Aiming was touchy: it would fail to move, then move way to much. When he got it aimed, Enrique reported by phone that the beam lit the entire panel. To further adjust the beam-expander, Jeran had to hand-manipulate it, throwing off the aim.

Jeran switched to the back-up plan. At the 1.5-mile panel, Steven held a reasonably powerful flashlight. At the 3-mile distance, Enrique held a monster flashlight. Jeran had a long-zoom camera, 17 feet above water, pointed down-range toward Steven and Enrique. The three set up a conference call, and with Jeran directing repeated the following procedure about ten times:

Steven shined his light toward the camera, through the hole in the 1.5 mile panel 17 feet above the waterline. Enrique held his light at 17 feet above water, which was about waist-high for him, and walked to his left so that its light would go around the middle panel. Jeran and I could see both lights in the camera's flip-out viewfinder. As well as Jeran could focus, the lights were sizable balls not dots, and they appeared to be at about the same height. Enrique, at 3 miles, would walk back to his right until his light was occluded by the 1.5-mile panel, centered as well as Jeran could estimate. Then Steven would turn off his light and remove it from the hole. The test was then whether we could see, in the viewfinder, Enrique's light through the hole in 1.5 mile panel, which would support a flat earth. If not, could we see it if he held it over his head, well over 17 feet above waterline, which would support a round earth.

In about 10 tries, with the light held waist-high at 17 feet above water we never clearly saw it through the center panel hole. On one of the attempts, maybe the fourth of ten, we clearly saw it when Enrique lifted it over his head. On that one, Jeran asked him to raise it and lower it a few times, and it would appear when Enrique raised it and vanish when he lowered it. That was the "gasp" moment. Jeran said, "that's interesting." I noted it was the prediction for a round earth. When they repeated the whole procedure, it did not happen again. I suggested having Enrique move from side-to-side a bit when occluded by the panel, in case it was lateral alignment that was off. Jeran accepted the suggestion, but it made no observable difference​
For the record, here's a contemporaneously dated copy.

Behind the Curve shows Jeran doing a laser test at the Victoria Canal a few weeks before the backup flashlight experiment, with the first Flat Earth International Conference in between. I describe a laser and flashlight test on the same evening. Both are true. On 25 Nov 217 Jeran first retried his laser experiment, then switched to the backup. I was not at the laser test shown in the film, though the film shows the earlier laser test failing very much the same way as the one I saw.
B

"I was not at the laser test shown in the film, though the film shows the earlier laser test failing very much the same way as the one I saw."

I meant that I was not at the first of Jeran's laser experiment shown in *Behind the Curve*. I was there for the one I described.
You must log in or register to reply here.

Perspective on the popularity of conspiracy theories.