Automated Motion Tracking in Videos Like Gimbal and GoFast

Mick West said:
There's very little, if any, parallax in the clouds. If there is some then you should be able to demonstrate it - and then demonstrate that it changes.

You seem to be applying some subjective metric. You need to be able to measure it - or at least point it out so other people can see it.
Click to expand...

I was experimenting with OpenCV today, and got this velocity field overlay video:


I think others have done similar things before, but I can't immediately find them. Unfortunately a lot of noise, and it's not good at tracking in WHT mode. But it's interesting, and might be worth more work.

Fantastic! Mick, how can I transfer those Little tracks into numerical values? What physical size do they express? Angular velocity? What scale should i use to measure them?

Staff member
This (OpenCV) is something of a new subject for me. I've generally done motion tracking and data extraction with Adobe After Effects, but that's focussed on tracking an object, and it's fiddly to use for measuring the speed of the background. So I thought I'd experiment with the OpenCV library - which lets your program more exactly what you'd like to look at, but is a bit of a pain to use.

The lines are motion vectors, so they represent the direction and distance a group of pixels moves over a period of time (three frames in this example). OpenVC is calculating a pre-pixel "Optical Flow" map. I started with this tutorial
https://learnopencv.com/optical-flow-in-opencv/
and code
https://github.com/spmallick/learnopencv/tree/master/Optical-Flow-in-OpenCV
(and the usual StackOverflow, etc. code results)

Getting the code to run was no easy task on ARM MacOS, but eventually, I got something working using Python. I modified the example to average the vectors for squares of pixels (hence the spacing) - but it's still noisy as there's noise and a lack of fine structure in the original.

I don't think this is the best approach to using OpenCV, but I have very little experience with it.

Going back to Adobe After effects - If you simply drop a track point on the video, it will track it across the screen. I can then reset to another point and continue:


The data from the track can then be compiled into a spreadsheet. I remove the jumps back and compute the per-frame delta ("delta" = "difference" i.e. how much it moves each frame). This gives a per-frame speed and a per-frame angle. Very noisy data. But using a 20-frame moving average shows something of what is going on: 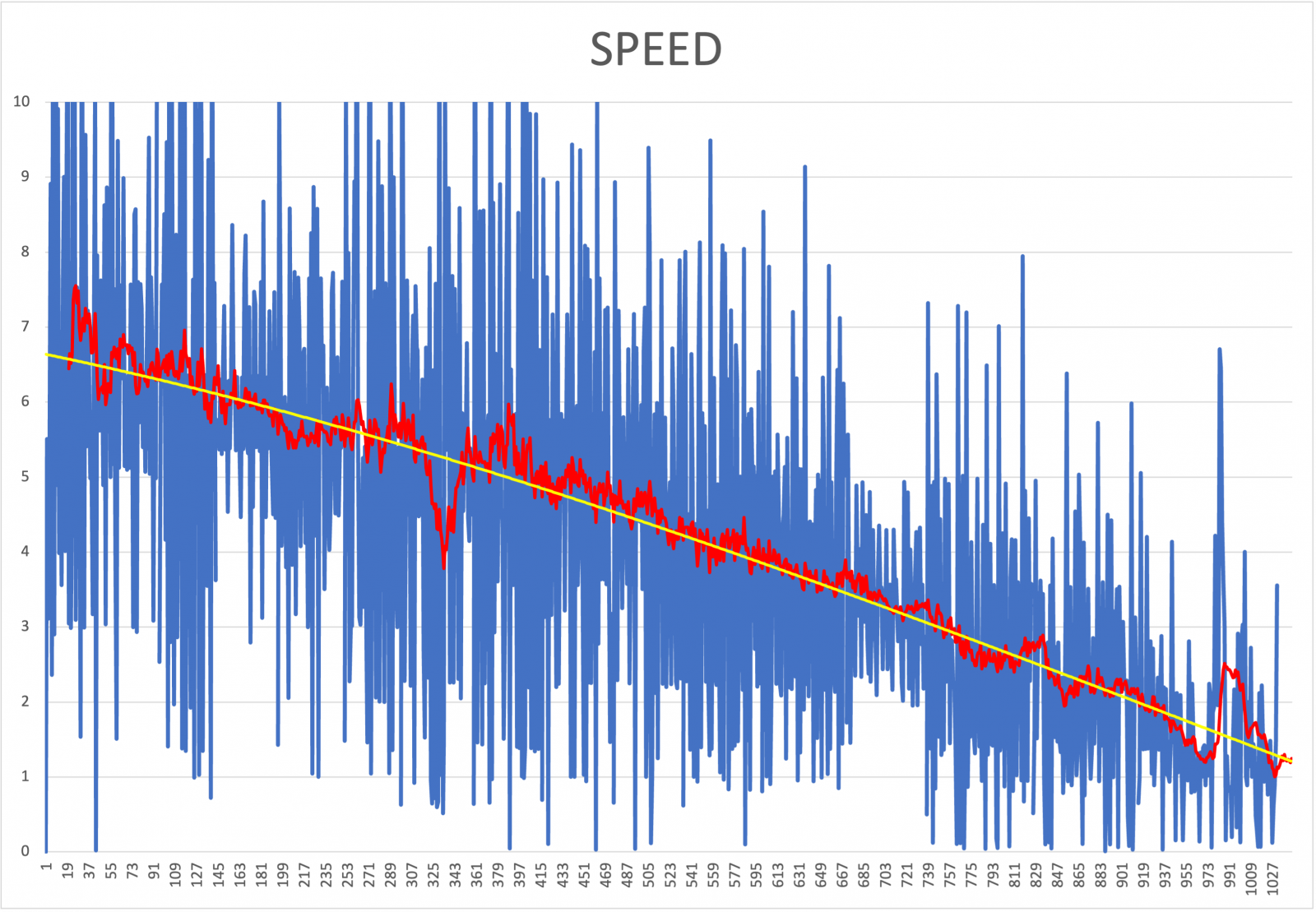 The jump at the end from the loss of lock distorts the true trendline, I should do it again with the video fully stabilized on the target. 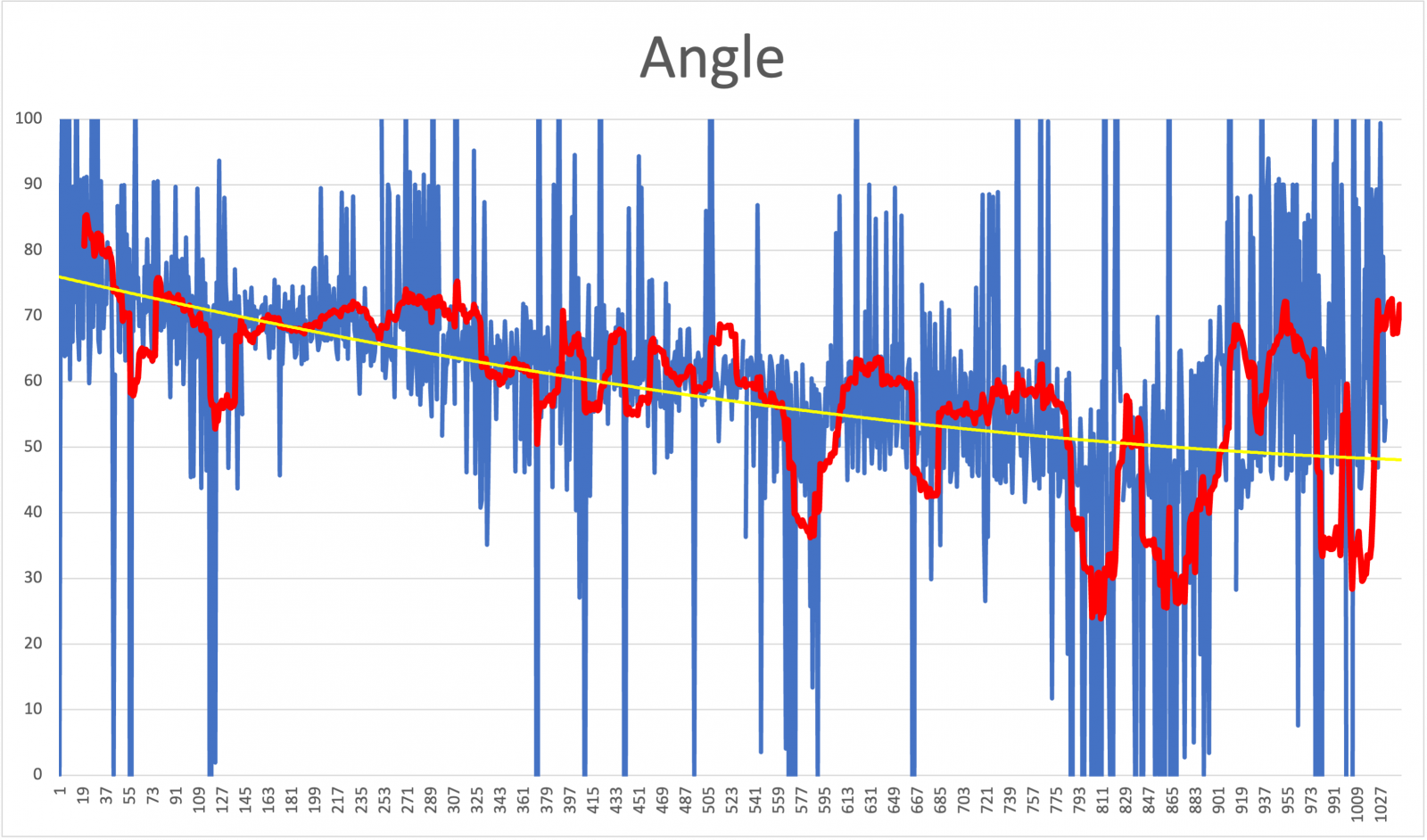 The blue is the raw data (with the resets removed). The red is 20-frame moving average. The yellow is a polynomial trendline - which I would not read too much into for the angle as it's influenced a lot more by the bumps, especially at the end. The data extraction was also semi-manual, and poor choice of regions might have led to misleading results.

Apologies for the redundant info on OpenCV. I was in the process of drafting the following when you posted your comment @MickWest.


If I understand OpenCV's documentation correctly, it sounds like the above cvCalcOpticalFlowBM function makes it possible to use Particle Image Velocimetry techniques; but all in software (i.e., no "laser light sheets" required)...

Particle Image Velocimetry (PIV) is a non-intrusive state-of-the-art technique for flow measurements...The PIV technique is based on image recording of the illuminated flow field using seeding particles ... The light scattered by the particles is recorded on a sequence of image frames ... by applying a spatial cross-correlation function as implemented by the OpenPIV resulting with a two dimensional two component velocity field ... The flow is illuminated twice by means of a laser light sheet forming a plane where the camera is focused on...

...to find out the velocity field of the moving fluid...from images of small particles, called tracers. The basic principle is to use two images of
the same particles with a small time delay between them. For that purpose, typically two laser shots are created and two images are taken... — OpenPIV Documentation — ppg 3, 8
Click to expand...

Mick West said:
...I got something working using Python...
Click to expand...

I believe DeepFlow (demoed in this Velocity from animated sequence / Optical Flow forum post) is Python too...

...
AFAIK people generate vectors in external apps (usually After Effects or Nuke with plugins like Twixor or go fancy with openCV libs or hacked ffmpeg builds), and then use that image sequence to make a velocity field. I assume that's how the amazing video below was done.

Ah, he says in another video he uses deep flow: https://thoth.inrialpes.fr/src/deepflow/

I overlaid black lines where I have consistently found "new clouds," and then did a very rough eyeballing calculation of the area under the curve for each segment: 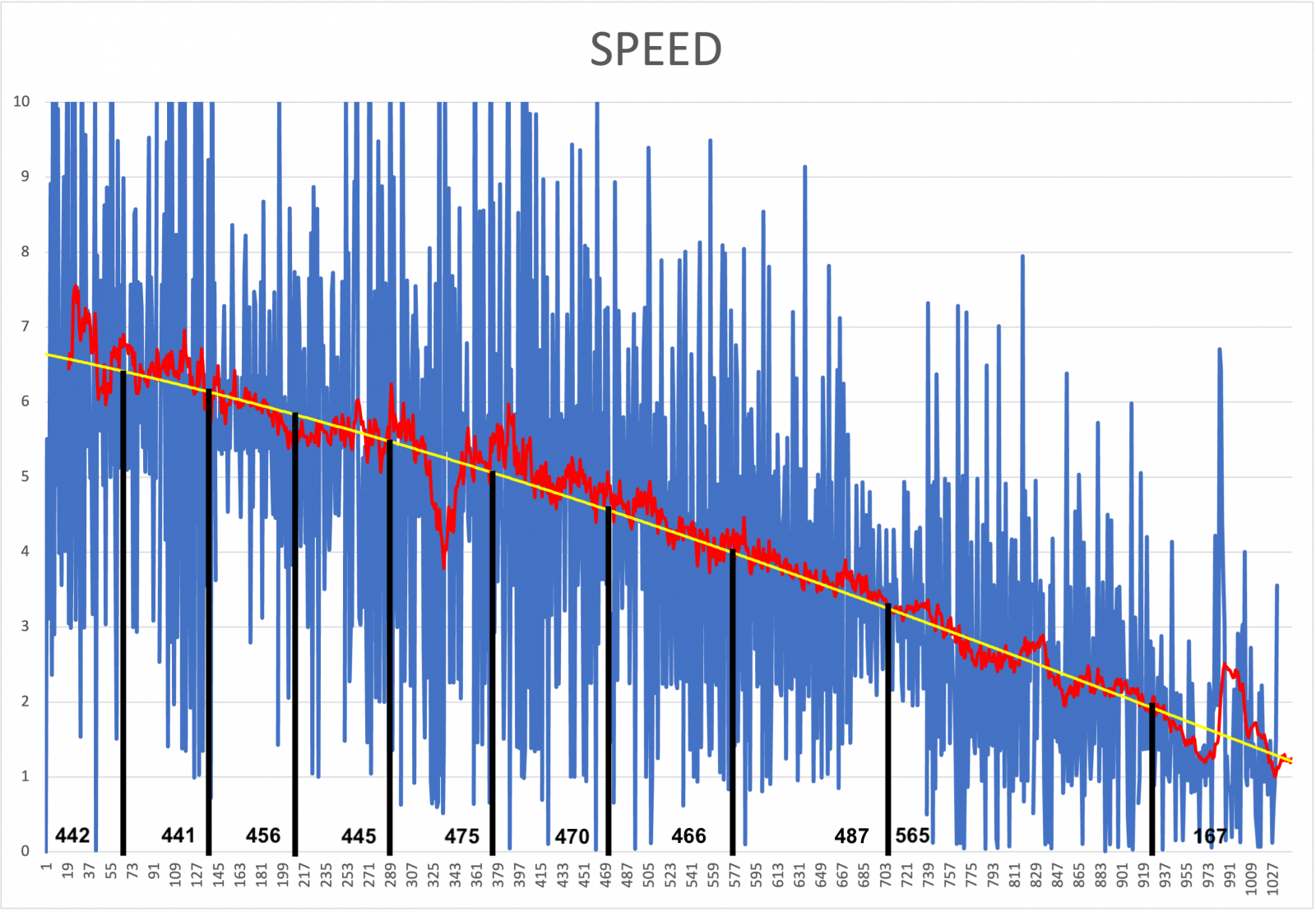 This supports that the curve may be a bit high at the end. (About 1/4 of a field passes in the last segment.)

This is the position curve of my "camera goal," which is the animated line that I use to make sure the camera panning is on track. It's the antiderivative of the speed curve.

I think we are going a little further. How many rad/sec does a given crest of clouds move during the movie? Is it possible to get it?

Leonardo Cuellar said:
I think we are going a little further. How many rad/sec does a given crest of clouds move during the movie? Is it possible to get it?
Click to expand...

that matches the rates I computed in https://www.metabunk.org/threads/gimbal-blender-simulation-with-clouds.12209/page-3#post-266506

I'm clear on x30 being the frame rate of the video.

I'm a little out of the loop on where 0.35 might come from though.

I'm guessing that would be this number...

Or something else? TIA.

sitarzan said:
I'm a little out of the loop on where 0.35 might come from though.

I'm guessing that would be this number...
Click to expand...

I wrote some OpenCV code to try to reproduce these results. It should be possible to tweak it further but I think the results so far are interesting enough to share. The following is a graph of the cloud motion angles relative to the bank angle: 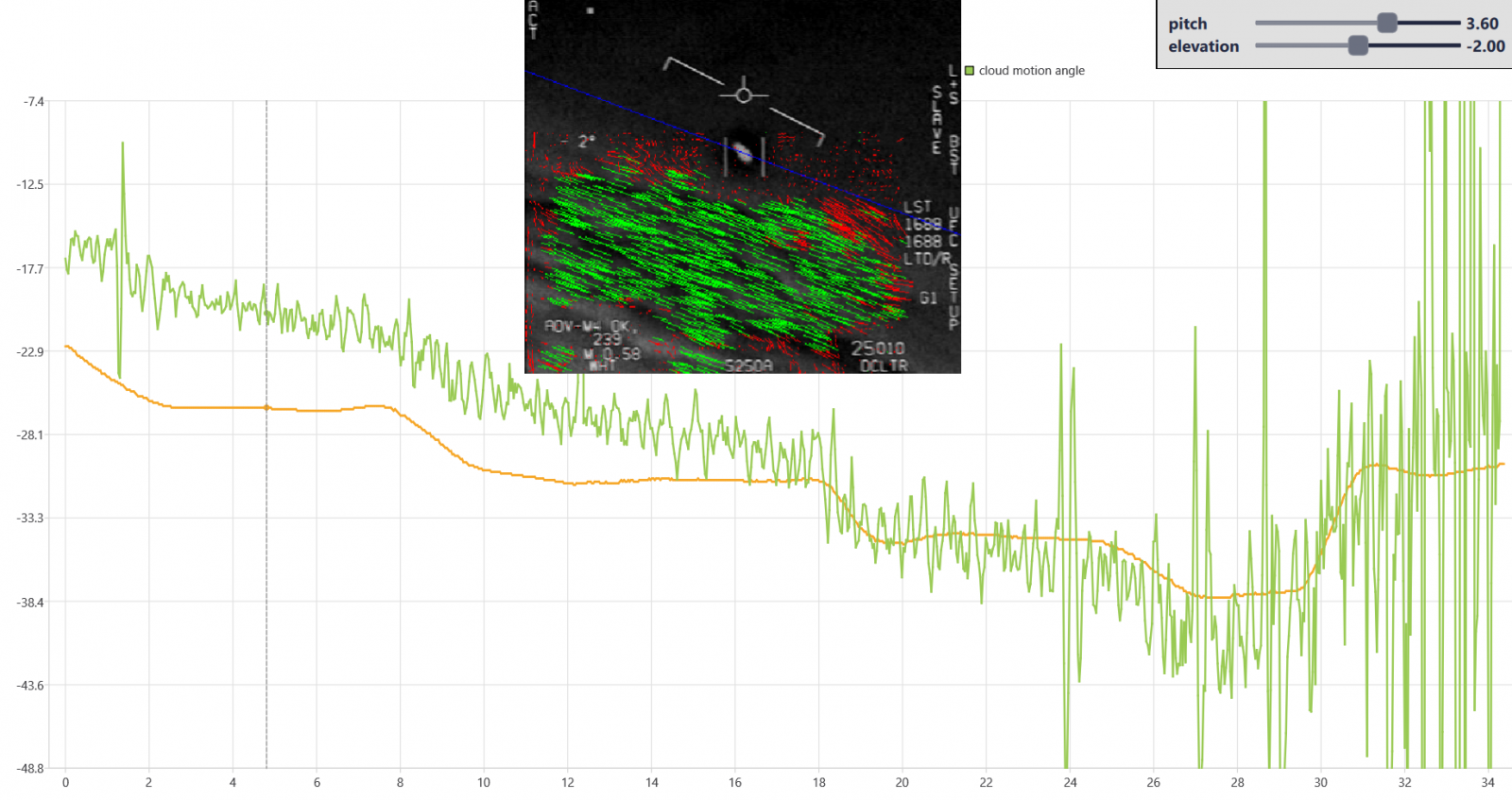 It's sensitive enough to detect all of the big bumps in the cloud motion during sudden pod rotations. With some more work it should be possible to make the results near the end a bit less noisy, but it's already good enough to show some correlation with the bank angle there.

I'm comparing the current frame with one 3 frames later as the larger displacements make it a bit easier to distinguish the signal from the noise. I apply the same transformation to the white hot region as described here , but only for selecting a sparse set of corners to track. I find the displacement of those corners with Lucas-Kanade, currently with the following parameters:

C++:
Finally I do a RANSAC (200 iterations, sample size of 5, max motion error of +/- 5 degrees) to reject outliers in the motion angles detected previously. The green lines in the image show the motion vectors that are part of the consensus set i.e the ones that are considered to be part of the cloud motion. The blue line is the final average cloud motion angle visualized.
Last edited: Aug 6, 2022

logicbear said:
wrote some OpenCV code to try to reproduce these results. It should be possible to tweak it further but I think the results so far are interesting enough to share. The following is a graph of the cloud motion angles relative to the bank angle:
Click to expand... 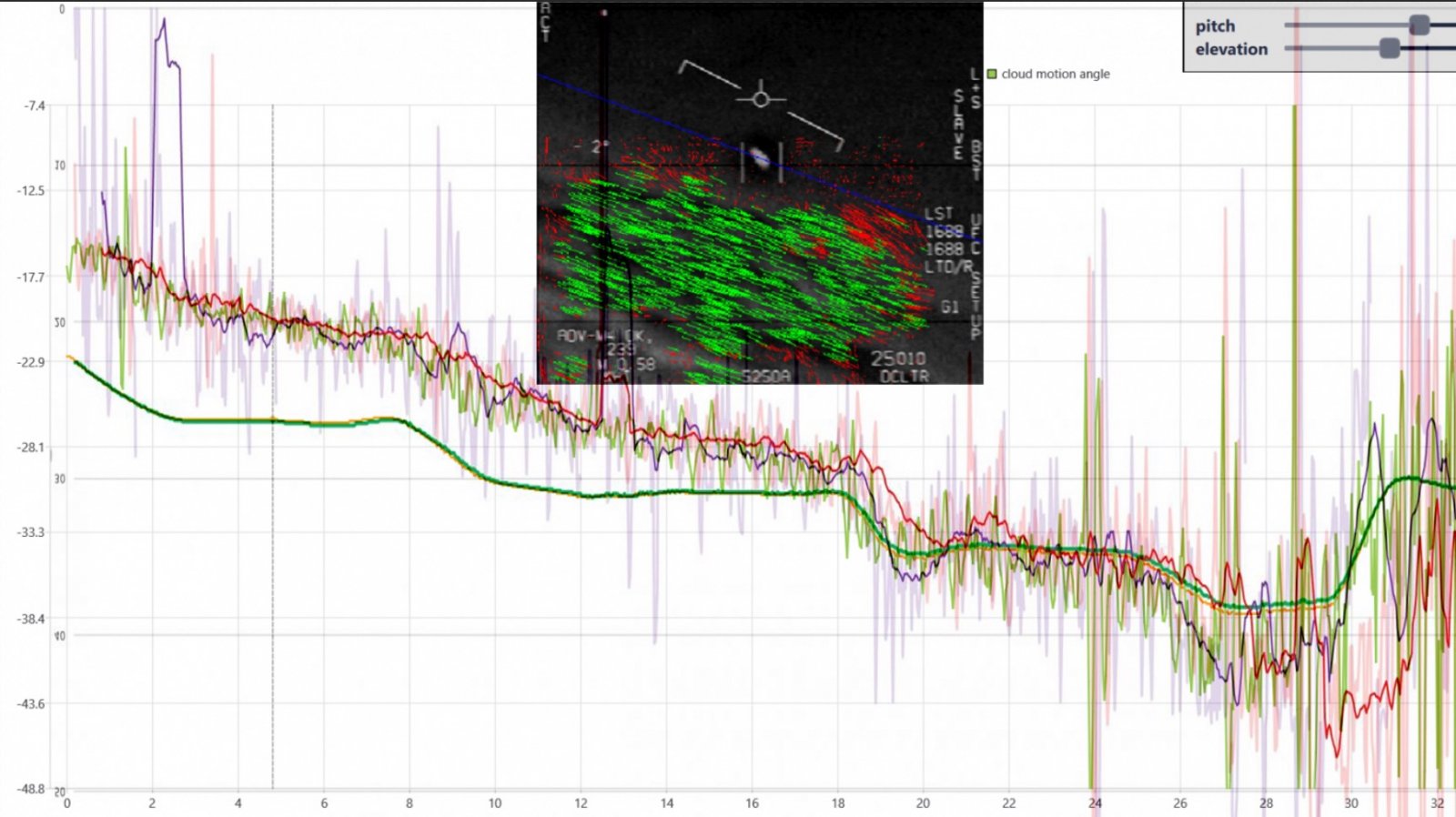 Some divergence at the end, but it's very noisy there. The smoother parts are essentially the same.
You must log in or register to reply here.