I don't know what it is about conspiracy theorists but the latest on the terrible Asiana flight 214 crash is that it was "faked".

The entire basis of this theory is a supposed extra window on the crashed airframe, that didn't appear on photographs before the fuselage burned. This is best illustrated by this photo of another Asiana 777 flight landing the day after the crash. the extra window is clearly visible just behind the front door on the crash aircraft. 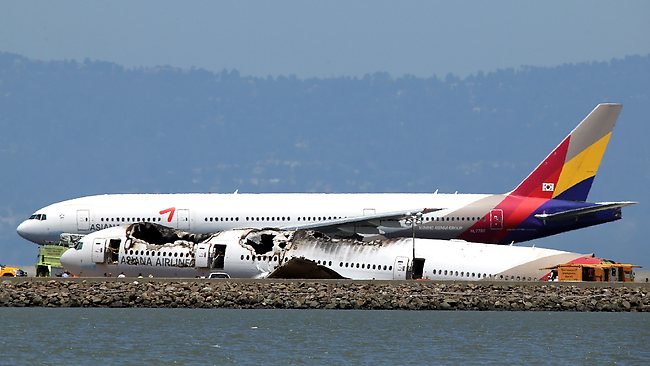 The genesis of the theory is the low res photos taken by passengers straight after the crash which don't show the blanked out window beside the door.

I have never taken much notice of these blanks, as the window is designed to take the structural loads I assumed they were just aluminium plates, perhaps MikeC can better inform us there.

If they are just thin aluminium then probably the fire would have destroyed the inner fabric covering and simply melted the blank, revealing the window.

It shows that it doesn't take much to create a conspiracy theory these days. For the life of me I cannot think of a reason to fake something like this.
Last edited by a moderator: Nov 20, 2013

Windows are usually blanked to indicate there is no seat immediately behind them - ironically precisely for rescue purposes - ie so rescue staff don't bother looking - and that is also why you are asked to leave the windows open for takeoff and landing.

And yes - they'll be relatively simple aluminium plates held in place with the same sort of hardware that holds a regular window.

But TBH I think he's got a reasonable question why are there different numbers of windows?

but leaping to the conclusions that it is a fake is too much.

thanks Mike...didnt see it. this is a different slant on it so maybe this could be merged... or retitled?

NP - FYI there's a series of photos at http://www.theatlantic.com/infocus/2013/07/the-crash-of-asiana-airlines-flight-214/100551/ that show the plane burned and unburned that have a consistent number of windows, with photos taken from various angles and from various people.

Edit: Later down that article is an aerial shot with "5 windows" and the fwd escape slide deflated

In fact looking through all eth comments the blanking has been identified 2 or 3 other times in videos and on other Asiana 777's by various people - not expecting any update from the poster tho....
You must log in or register to reply here.