Another TV Documentary Worth Viewing

Produced by the Canadian Broadcasting Corporation, Playing God with Planet Earth talks about the technology, motivation and consequences of geoengineering.

I found the second half interesting... they discus what would motivate a nation to mitigate the climate. They surmise that wealthier nations could more easily find technological solutions to deal with the consequences of climate change and so postpone the need to engage in risky geoengineering schemes. OTOH, poorer countries, in a desperate attempt to fight rising seas or huge storms, may be more easily tempted to employ cheap and poorly understood geoenginering solutions. Solutions that might only transfer the problem and result in devastating consequences.

They use an example from Senegal to illustrate the point. In an attempt to control flooding, authorities decided to cut a raw canal through a sand bar, allowing a river's flood waters to drain directly into the ocean. Unfortunately, the low tech and poorly studied solution didn't reinforce the banks of the simple canal nor did it allow for controlling the rate of drainage. As a consequence, the canal eroded the sand bar and the opening quickly grew from a few metres wide to several kilometres. The open ocean battered the coast and devastated the small village of Doun Baba Dieye ("Doon baba dee" - I love that name). 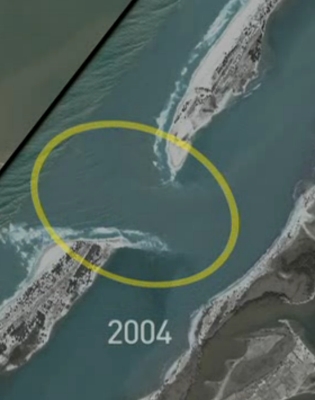 The documentary touches many aspects of the issue but it reinforces the point that geoengineering is not a cure for what ails the planet, and it's more than likely not even a good idea.

Did it also point out that geoengineering is precisely what AGW is?

I think so. They make the distinction that one is a consequence of modern society and the other would be deliberate manipulation.

But what never occurred to me, and what I found most interesting, is the suggestion that a poor nation might be more inclined to manipulate the climate than a rich one. It goes against the conspiracy meme of all powerful elites taking matters into their own hands. The rich and powerful can find a way to live with climate change, the poorer nations may not have as many options.

Thanks TH. I'm always on the look-out for interesting documentaries.

This "Doc Zone" turns up several good ones: http://thepiratebay.se/search/DOC ZONE/0/7/0
You must log in or register to reply here.

Related Articles
Another Scandinavian "USO" (not really, surface feature, Sweden)
Another sun path claim
Debunked: "You must love yourself before you love another" - fake Buddha quote
Another suspected Novichok incident in Salisbury UK
Another photographic anomaly [Long exposure of plane lights]
Contrail Shadowing another Contrail
Another photoshopped chemtrail poster: Michael J Murphy
Another Google Moon Anomaly
Another triangular aircraft, this time in Kansas [B2 Bomber]
(Another) secretly recorded video of a "chemtrail pilot" "confessing".
Bucky Rogers: Another anti-NWO domestic terrorist caught before the final act.
Another Chemtrail Lawsuit
Not Just ANother Example Of Unconstitutional Expansion Of The TSA
Another Anti-CCW (C0ncealed Carry Weapon) Video
Another site
Another one about chemtrails
Documentary Recommendation: Mirage Men
The Dimming - New Documentary From Dane Wigington
Light Fall Off in Apollo Missions - American Moon Documentary
Debunking Guidelines for: "Convex Earth - The Documentary"
Debunked: Image of Money Pallet shown in Iranian Documentary, 2016
MH17 Documentary from the BBC
Mick West Interview for "Overcast" documentary by Dedal Films
Debunked: 8,000 dead from "chemtrails" in Birmingham, UK (Look Up Documentary)
"Look Up" - chemtrails documentary on Kickstarter
Skyderalert mobile app and "LOOK UP" - New Documentary
TV Documentary Worth Viewing
Claim: "Your birth certificate is worth millions"
This video is worth lookiug at.. debunking
Share:
Facebook Twitter Reddit Pinterest Tumblr WhatsApp Email Share Link