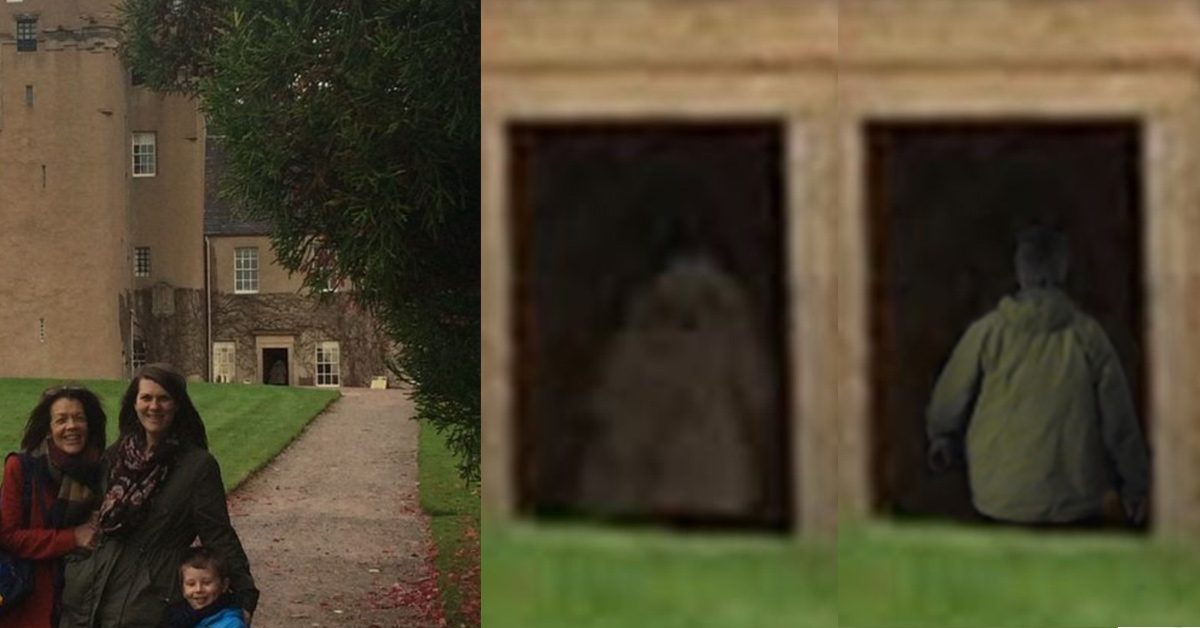 Supposed ghost photos have a number of possible explanations. The two most likely are that it's a photo of something that just kind of looks like a "ghost", or that it's some kind of hoax photo. Or course there's also the distant possibility that maybe it's a ghost, but since that would require an entirely new scientific understanding of the universe and is something that has never been definitively observed before in all of human history then it's generally a good idea to eliminate the other two first. While this not the most important form of debunking, ghost photos are also an interesting exercise in figuring things out with Google and Photoshop.

So, what have we here?

First of all let's look at some other photos of the scene. I searched Google Images for "Crathes castle", and set the minimum image size to 10MP to ensure we get detailed photos. 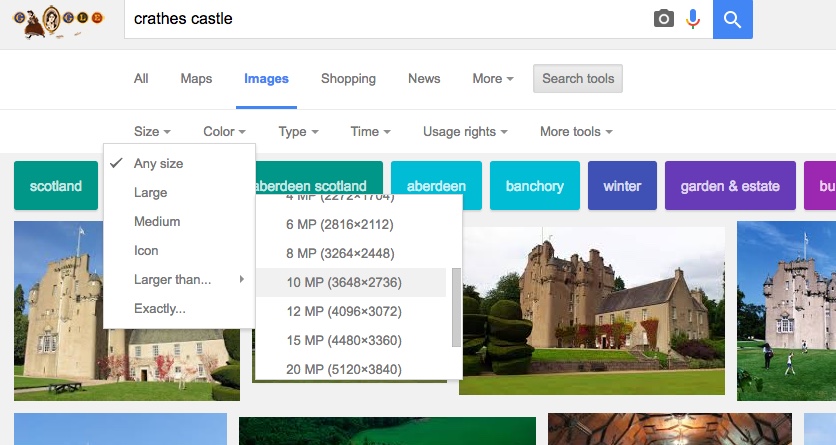 This led me to this photo of the castle: 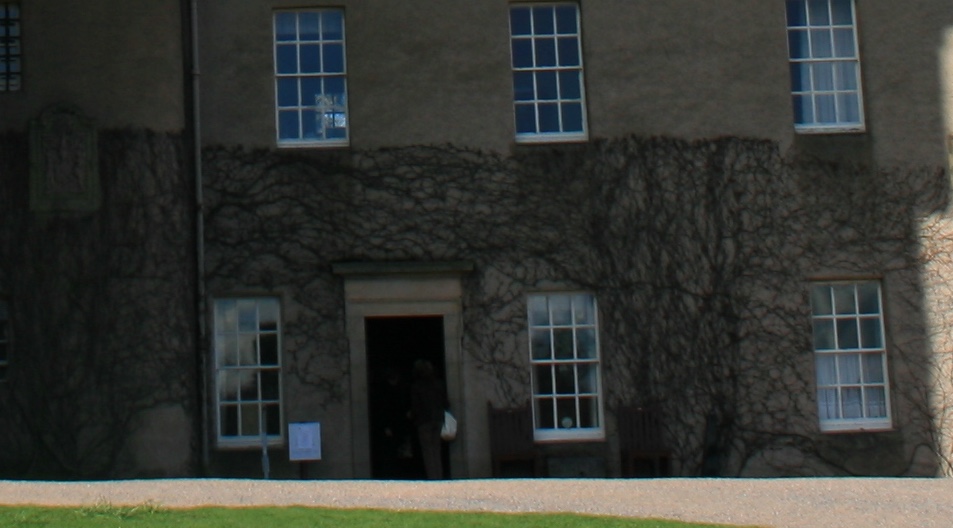 Notice two things here, the door seems taller from this viewpoint, and the there's two shadowy figures in it!

Of course the shadowy figures here are just visitors, which we can see if we brighten the image a bit: 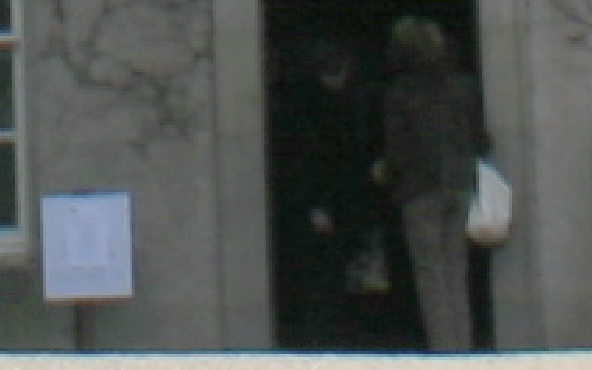 Now the "ghost" looks rather odd as it seems to have a full height cape, which would be rather old-fashioned. But we can see from this photo that the legs of the figure have been cut off. If we scale the and position the "ghost" image, we can see it matches a normal sized figure in the doorway, wearing a normal white coat. 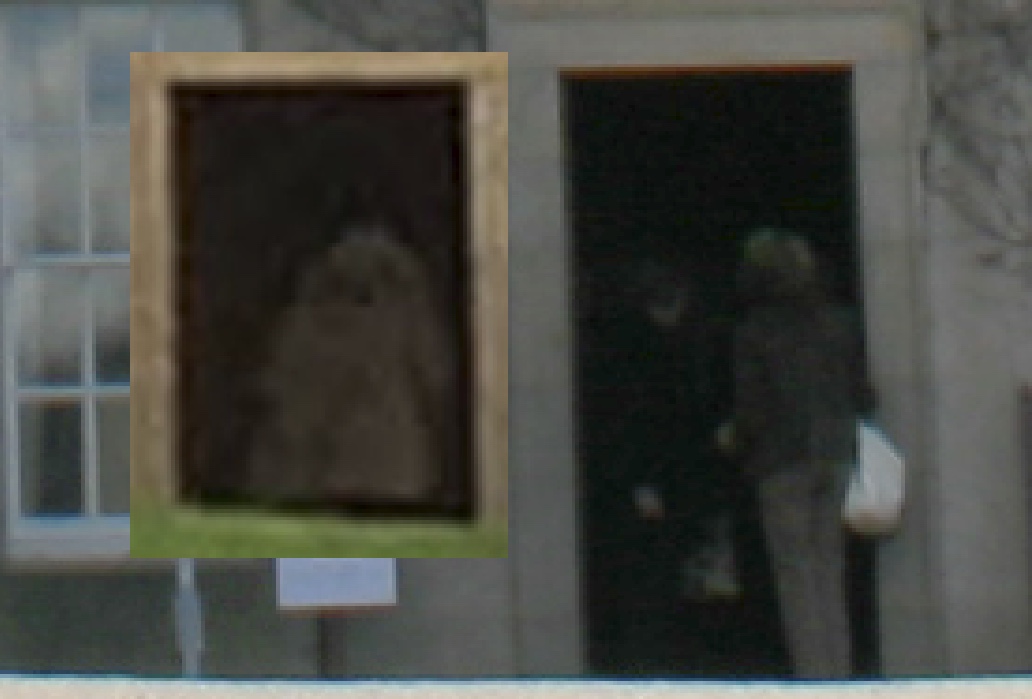 Add some legs and you've just got a tall figure wearing a coat. Maybe a light colored raincoat with a hood.

Here's another photo of the castle: 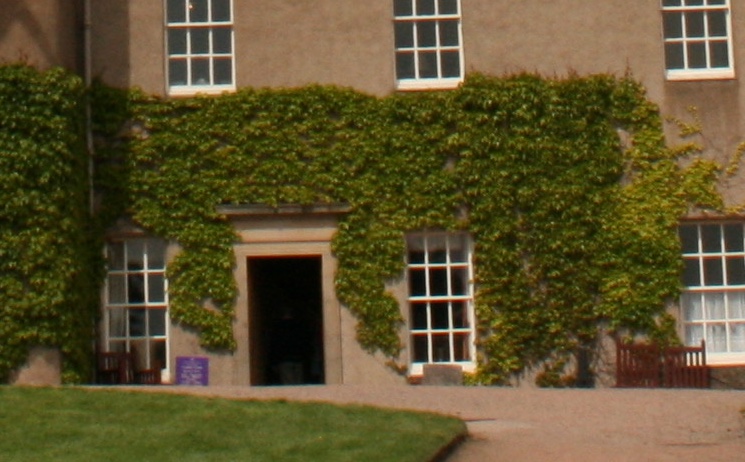 Again with the shadowy figure or a regular castle visitor in the doorway: 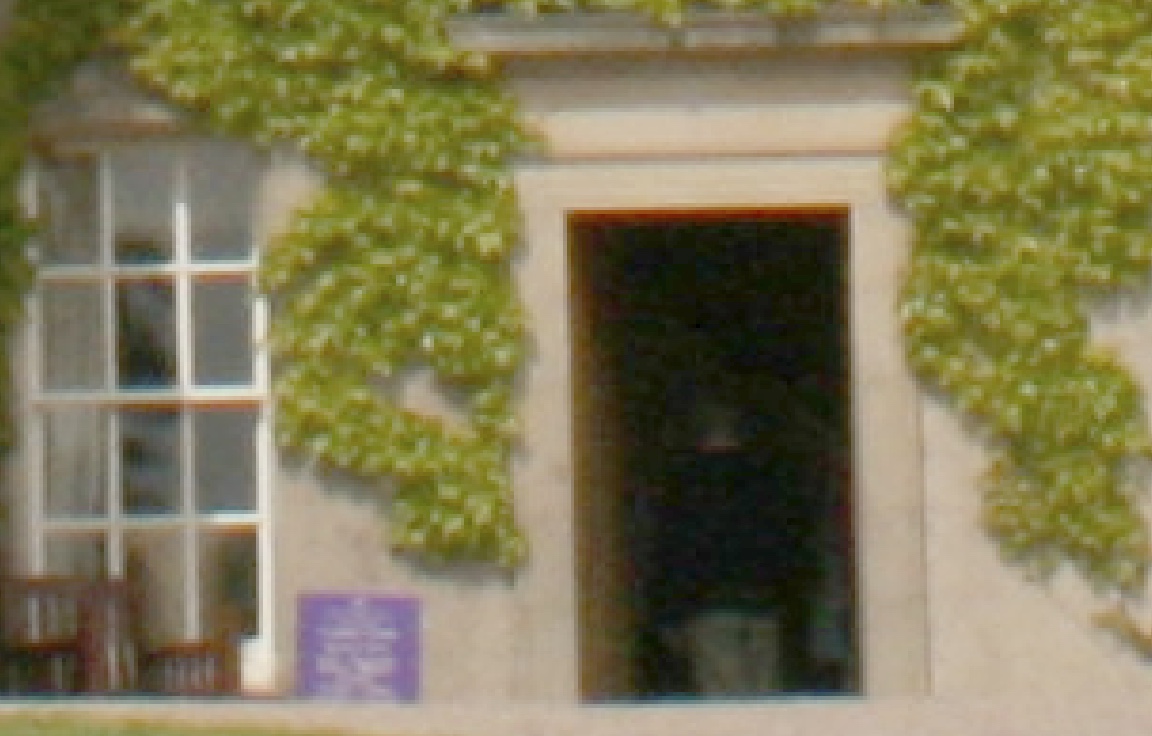 So shadowy figures in the doorway are nothing new.

Notice also here how the open door roughly matches the lighting in the "ghost" photo. With the door actually closed you see the lighter reddish brown wood. Hard to say though with the limited resolution and lighting, and the door could well be closed. 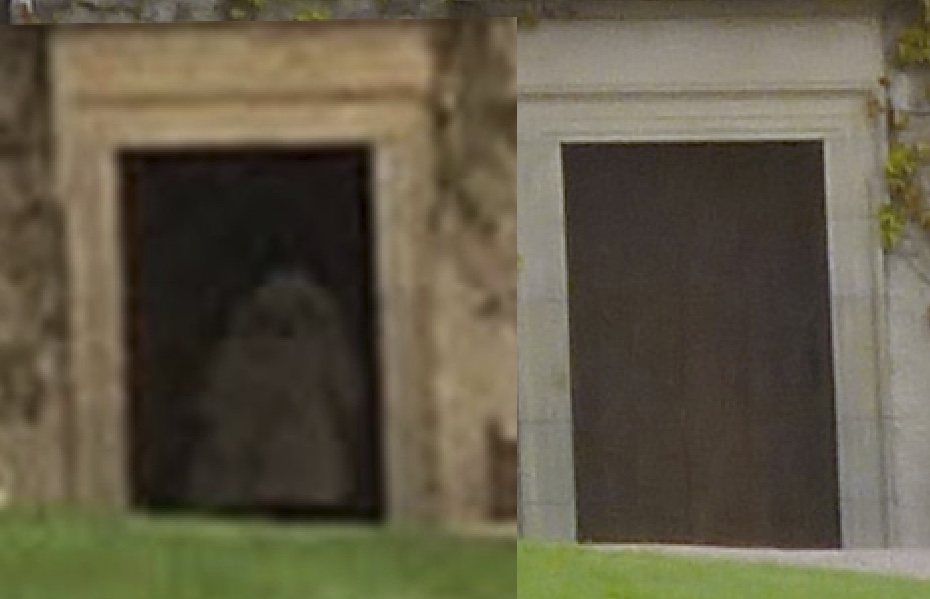 So it would seem that the simplest explanation here is that it's someone stood in the open doorway. Of course it could also be a fake photo - it's pretty easy to add a "ghost". But I think I'd put that second on the list. Still incredibly higher than an actual ghost though.

Staff member
Here's a photo from a similar viewpoint (but further to the left), with the lawn obscuring the bottom part of the doorway, and the visitors' legs. 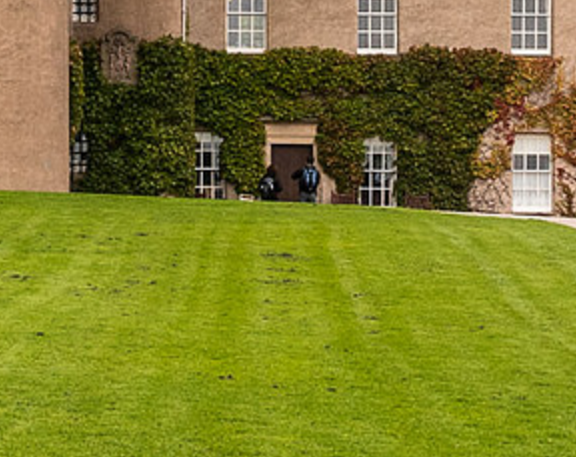 
And another, from just a few weeks ago, showing the door open and visitors who look as if they have just emerged from inside: 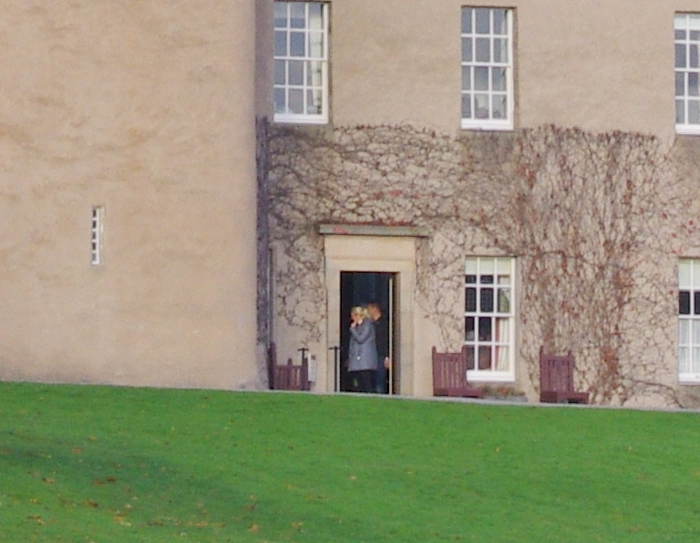 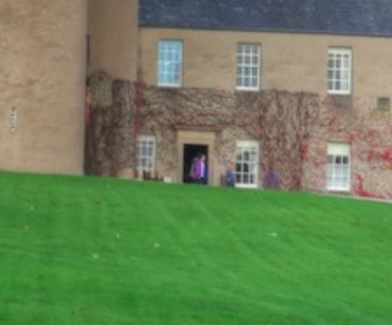 
In fact from a quick search it seems that there are more photos with visitors in that doorway than without!
Last edited: Nov 29, 2016

Trailblazer said:
Here's a photo from a similar viewpoint (but further to the left), with the lawn obscuring the bottom part of the doorway, and the visitors' legs.

That's a good one as the height matches. 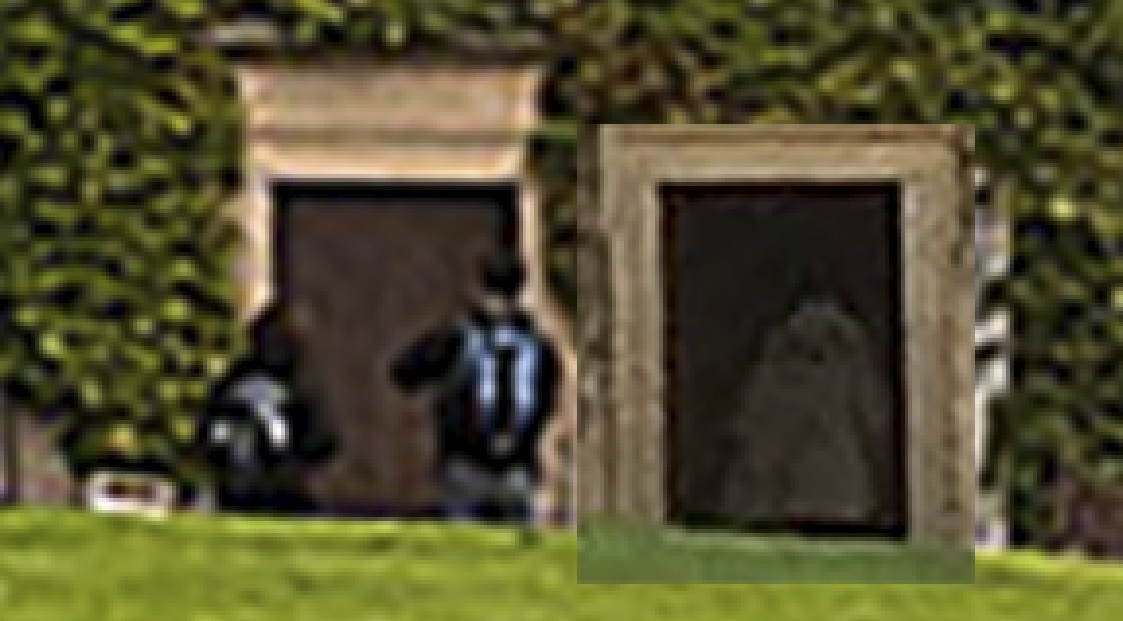 Trailblazer said:
In fact from a quick search it seems that there are more photos with visitors in that doorway than without!
Click to expand...

Or even just walking front of it, or towards it.

Staff member
It's also worth pointing out that this door is the main entrance to the castle, which is open to the public: http://www.nts.org.uk/Property/Crathes-Castle-Garden-and-Estate/ 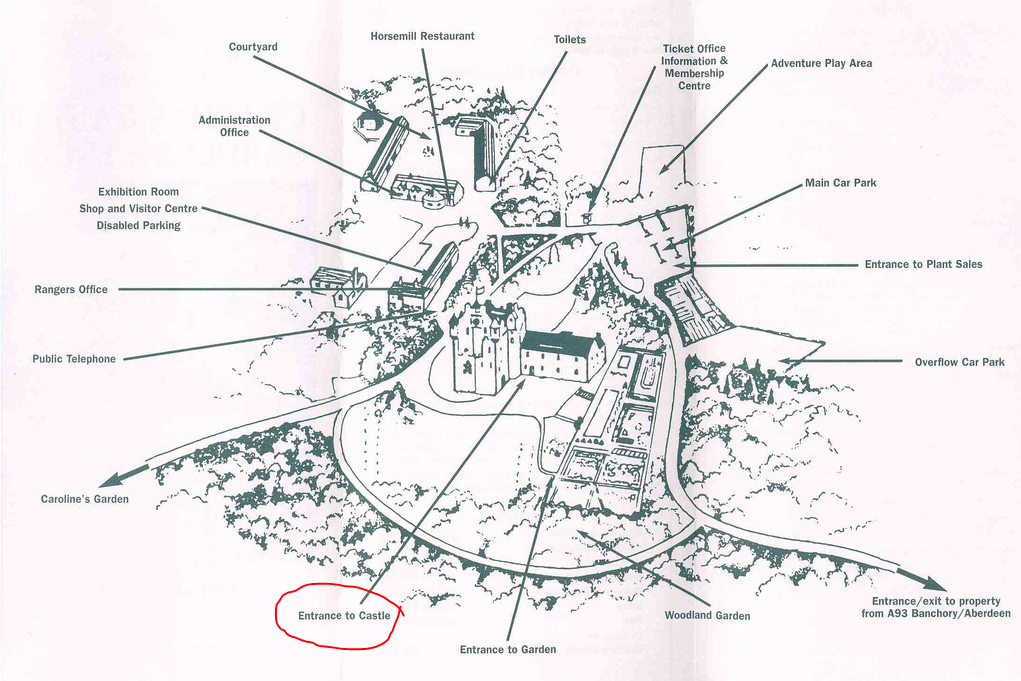 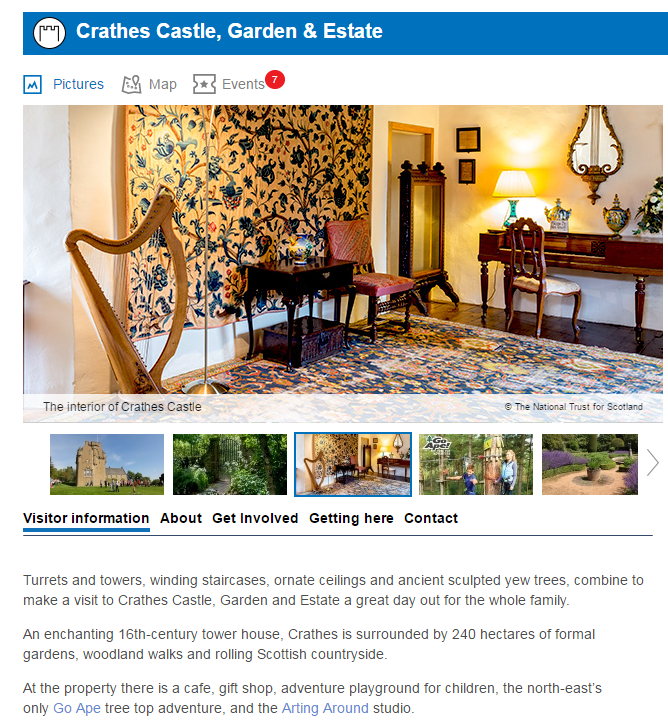 (Sketch map is from https://flic.kr/p/9Ztvrc)

You would expect to see plenty of people walking in and out of that door.

Staff member
I took a photo of myself from behind to illustrate the type of thing:

Trailblazer said:
You would expect to see plenty of people walking in and out of that door.
Click to expand...

The poor ghost must be pissed off very upset with all these people passing through him (or her? Do ghosts have a gender?)
You must log in or register to reply here.

H
Ghost in iphone photo, some sort of glitch?