All The Ships At Sea: A Pragmatic Test Of Earth's Shape

For some reason few people on both sides of the FE issue talk about this. How many ships have sailed between the continents in the last 500 years?

Just one trivial example: The clipper ships. When there was a premium for the first new crop of tea from China, the clippers took this route: 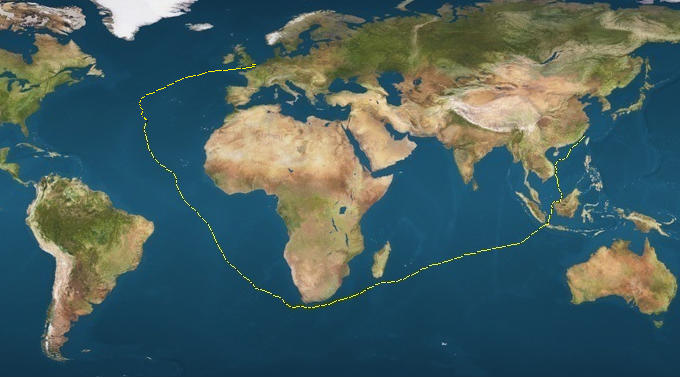 When steam, the Suez canal, and new tea plantations in India, Ceylon etc. made the the tea clippers obsolete, they started to transport wool from Australia... this time going east around the horn.

If you take the time to study the history of the clippers you'll appreciate that these voyages were matters of great public interest. Routes, exact times, everything about the voyages were and are well known. How did the clippers navigate? How did they make the distances in known times? How could this possibly be consistent with the FE map?

An interactive map for the year 2012: https://www.shipmap.org/


There must be a correct map. Otherwise ships would get hopelessly lost.

There must be a correct way to navigate: Otherwise ships would get hopelessly lost.

Only one map can be compatible to the known times, distances, and directions of millions of voyages.

A web of millions of voyages, made by people who were just pragmatically trying to get around, has tested and verified the proper map.
Last edited: Jul 26, 2017

This is a real time interactive map. There are also detailed maps of the world's shipping routes.

IMO all FE conversations should begin with this. The conversation is dominated by discussions about theory. But theory has to be tested. Which model and which map has passed the test?

FE belief is predicated on the odd idea that the map of the world is unknown and down right mysterious. But people have been traveling between the continents for hundreds of years. It's now a mundane activity.


Point one: There must be a true map. How would ships find their way across thousands of miles of ocean otherwise? Which direction would they set off? What's the distance? Someone somewhere must have a true map.

Point three: There have been millions of voyages, and the distances and directions always match up to the SE map, and could not match up with any FE map. Any FE map must have different directions and distances and could not compatible with the sphere earth map. The differences are most notable south of the equator. The FE map shows a vastly larger surface south of the equator compared to the SE map. The SE map has been tested millions of times. Not one of the hundreds of thousands of sailors in history has reported that the SE map doesn't work, or reported the huge distances in the southern hemisphere that would have to be there according to any FE map.

Point four: Because we know the sphere earth map is correct any theory that seemingly supports a FE must be a mistake. It's as simple as that. You're just making a mistake.
Last edited: Sep 4, 2017

Z.W. Wolf said:
IMO all FE conversations should begin with this. The conversation is dominated by discussions about theory. But theory has to be tested. Which model and which map has passed the test?
Click to expand...

A problem there is that topics like coordinates and 3D to 2D projection is rather unintuitive to most people. I brought up the Mercator map on Joe Rogan and I could see his eyes glaze over. (1h54m50s)
Source: https://youtu.be/kvitm0bMHyA?t=1h54m50s

I put funny cuz it looks like his eyes are glazing over in that pic.

And just to say: I think bringing the shipping routes into this is great. I know you haven't had much feedback - from either side - but I think that's just testament to how straightforward and inarguable this is. It's just like, oh yeah, there's nothing to either add to or debate in that.

Z.W. Wolf said:
This is a real time interactive map.

Here's a direct link, so we can bypass the Daily Mail:

Rory said:
Here's a direct link, so we can bypass the Daily Mail:

This is the one I use
https://www.vesselfinder.com/

Off topic but ship related. I did a qualification in navigation at 16. I seem to recall that a minute of Longitude equivalent to a nautical mile. However a degree of longitude gets shorter as you go further north and south and charts take this into account.
I only got a C so I could be wrong

David Fraser said:
Off topic but ship related. I did a qualification in navigation at 16. I seem to recall that a minute of Longitude equivalent to a nautical mile. However a degree of longitude gets shorter as you go further north and south and charts take this into account.
I only got a C so I could be wrong
Click to expand...

Latitude stays the same. One minute of Lat. is one nautical mile.

The US chart 1 will tell you more than you need to know, but they drive on the other side of the road, and get port/starboard buoyage the wrong way round!
https://nauticalcharts.noaa.gov/publications/docs/us-chart-1/ChartNo1.pdf

"All the ships at sea" -- they travel great distances favoring the great circle route, if possible, because it's the shortest distance, correct? But ocean currents should be a factor as well as dangerous rocks or bad weather, or pirates?

However, when it comes to navigating a great circle course, bearings can be tricky going say from east to west. Your course has to be constantly corrected so that you end up turning in regards to compass bearing even while by eye you appear to be sailing straight ahead, which in fact, you are. A ship departing San Diego headed for Hawaii sails due west but to remain on a due west course has to constantly turn starboard (right) in order to keep the same latitude, otherwise she'll drift southwest by maintaining a dead ahead rudder. Does this make sense on a "flat" earth? Is this not "a pragmatic test of Earth's shape?"

Except for one: Traveling due west along the equator. Starting let's say in Equador and heading due west, no adjustment need be made to stay on the great circle route, unless of course, you want to avoid an obstacle such as the Galapagos islands or whatever. On a "flat" earth, how could this be true? How would one sail a straight line due west, without turning right or left (starboard or port) when the "flat" earth map shows the equator as a circular route that continually curves to the right (starboard)?
You must log in or register to reply here.

Wednesday at 5:39 AM
Pertti Niukkanen